The Canada C3 expedition aims to connect Canadians through arts, science, culture and education during a five-month journey around the country
By Harry Wilson
June 1, 2017

One hundred and fifty days, three coasts, 23,000 kilometres and a host of fascinating experiences, landscapes and people.

That sums up Canada C3, a five-month expedition aboard a former Canadian Coast Guard icebreaker that sets sail from Toronto tonight and is designed to celebrate Canada and connect Canadians during the country’s sesquicentennial.

“It’s been a long path to get here, and it’s hard to believe that it’s June 1 and we’re ready to go,” says Geoff Green, the expedition's leader. “It’s inspiring and exciting to be here at the starting line.”

The expedition, which will carry the flag of The Royal Canadian Geographical Society, will journey from Toronto to Victoria via the Northwest Passage (see an interactive map here) and is designed around the four key themes of Canada 150: diversity and inclusion; reconciliation; youth engagement; and the environment.

To help explore those themes, each of the expedition’s 15 legs will feature a cross-section of Canadians, including youth ambassadors, scientists, artists, Indigenous Elders, historians, journalists and educators. Some of their names are instantly recognizable — author and anthropologist Wade Davis, Murray Sinclair, the former chair of the Truth and Reconciliation Commission, and musician Alex Cuba, to name a few — while others are not. At least not yet. Take youth ambassador Aviaq Johnston, for instance, an Inuk who grew up in Igloolik, Nunavut. Johnston, who will join the expedition on its ninth leg when it travels from Pond Inlet to Cambridge Bay, received a Governor General’s History Award in 2014 for her short story, Tarnikuluk, and her first novel, Those Who Run in the Sky, was published in March.

“We wanted to have a diversity of Canadians on every leg,” says Green, “and of course that means Indigenous Canadians. But it became apparent early on that not everyone wanted to celebrate Canada 150 — the last 150 years have not been great for so many Indigenous Canadians. So the expedition became not just a voyage of science and learning, but one of reconciliation, too.”

Green says a space known as the Legacy Room has been set aside on the ship to facilitate reconciliation. “It will be a space for Indigenous ceremonies, such as smudging, but it’s also going to be a place for conversations, storytelling and trust building.”

The expedition will also feature a 14-project science program covering topics as diverse as coastal marine soundscapes, the impact of microplastics on Canadian shorelines, and trans-Canada eDNA biodiversity mapping.

Throughout the expedition, participants will also make use of a 4.5-by-5-metre map created especially for the journey by Canadian Geographic cartographer Chris Brackley (see below).

“The C3 map is the first giant floor map to depict a specific travel route and as such provided a unique cartographic opportunity,” says Brackley. “Though the overall map is a realistic globe view projection, we laid out the text on the map to be readable from the perspective of being on the ship and looking toward the shore. This will make it connect well to the experience of those sailing in the ship but also has the added benefit of making the text the right way up, no matter which side someone is viewing the map from.” 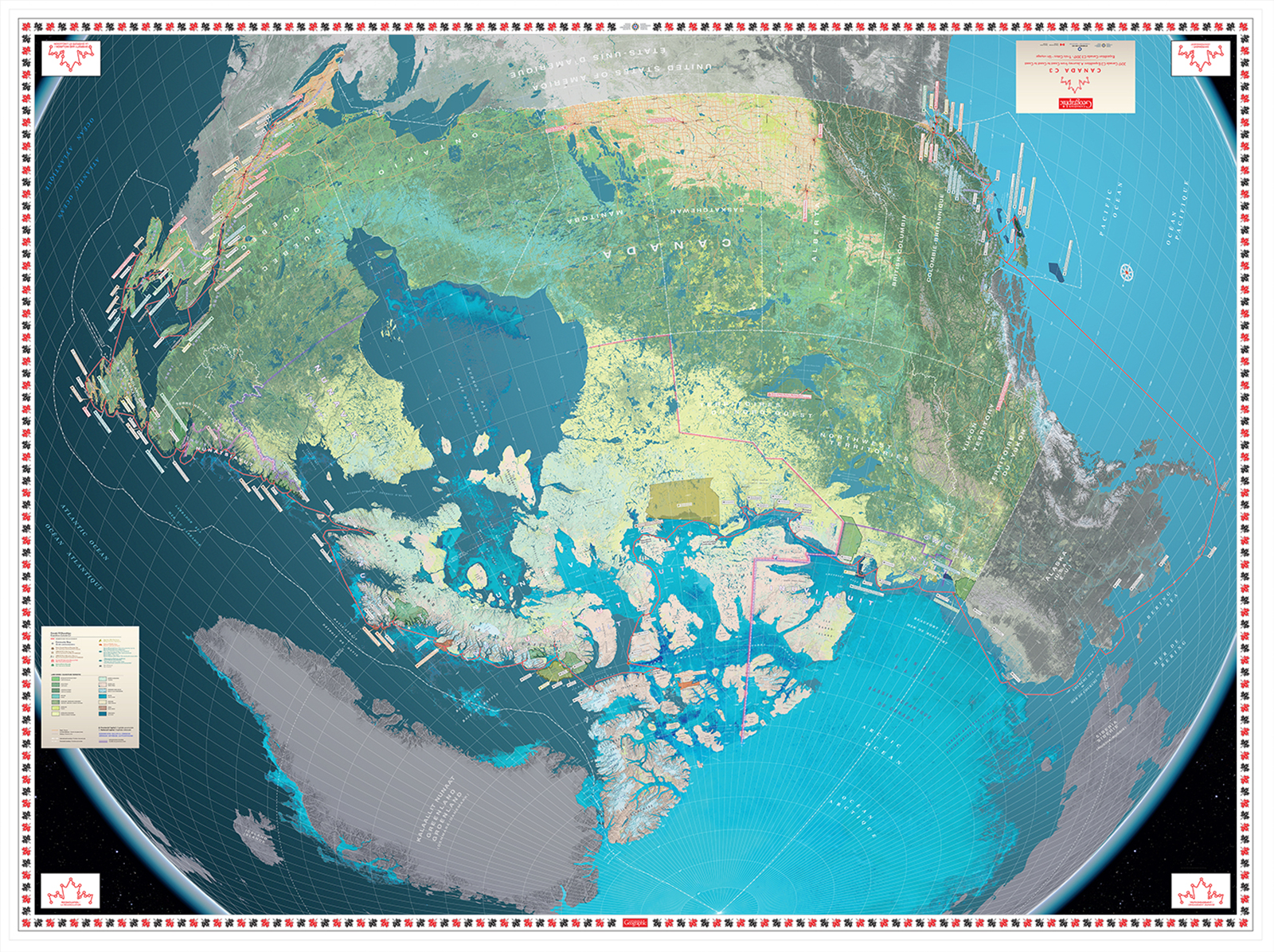 The Canada C3 expedition map shows the expedition route from a unique perspective intended to be readable whether you're on the ship or on the shore. (Map: Chris Brackley/Canadian Geographic)