A new report by Alpine Club of Canada scientists and other experts highlights worrying trends in Canada’s mountain ecosystems
By Abi Hayward and Nick Walker
June 1, 2018

Glacial retreat, shorter ski seasons and the decline of wild sheep populations: these are just a few ways in which alpine ecosystems and their watersheds are being transformed. And scientists are looking to the mountains as early warning systems precisely because they respond so rapidly — and intensely — to climatic and environmental shifts.

The sheer size, diversity and inhospitableness of these regions makes them notoriously difficult to study. That’s why the 2018 State of the Mountains Report is so valuable. This Alpine Club of Canada report, released on May 26, combines and distils the most recent scientific fieldwork, data modelling and photo evidence from a host of ecologists, geologists, hydrologists, climatologists and other researchers to create the clearest picture yet of how our mountain spaces as a whole are changing, and changing fast.

These are highly complex regions — hotbeds of species diversity criss-crossed by critical migration routes, but also wellsprings of Canadian culture and identity, recreation and economy covering more than a quarter of the country. And as the map below shows, many major rivers rise from the highest elevations, supporting ecosystems, communities and industries both near and far from their snowpack- and glacier-fed headwaters.

From the peaks to the Prairies and on, mountains affect us all. Read on for report highlights, and to find out more about the state of our mountains. 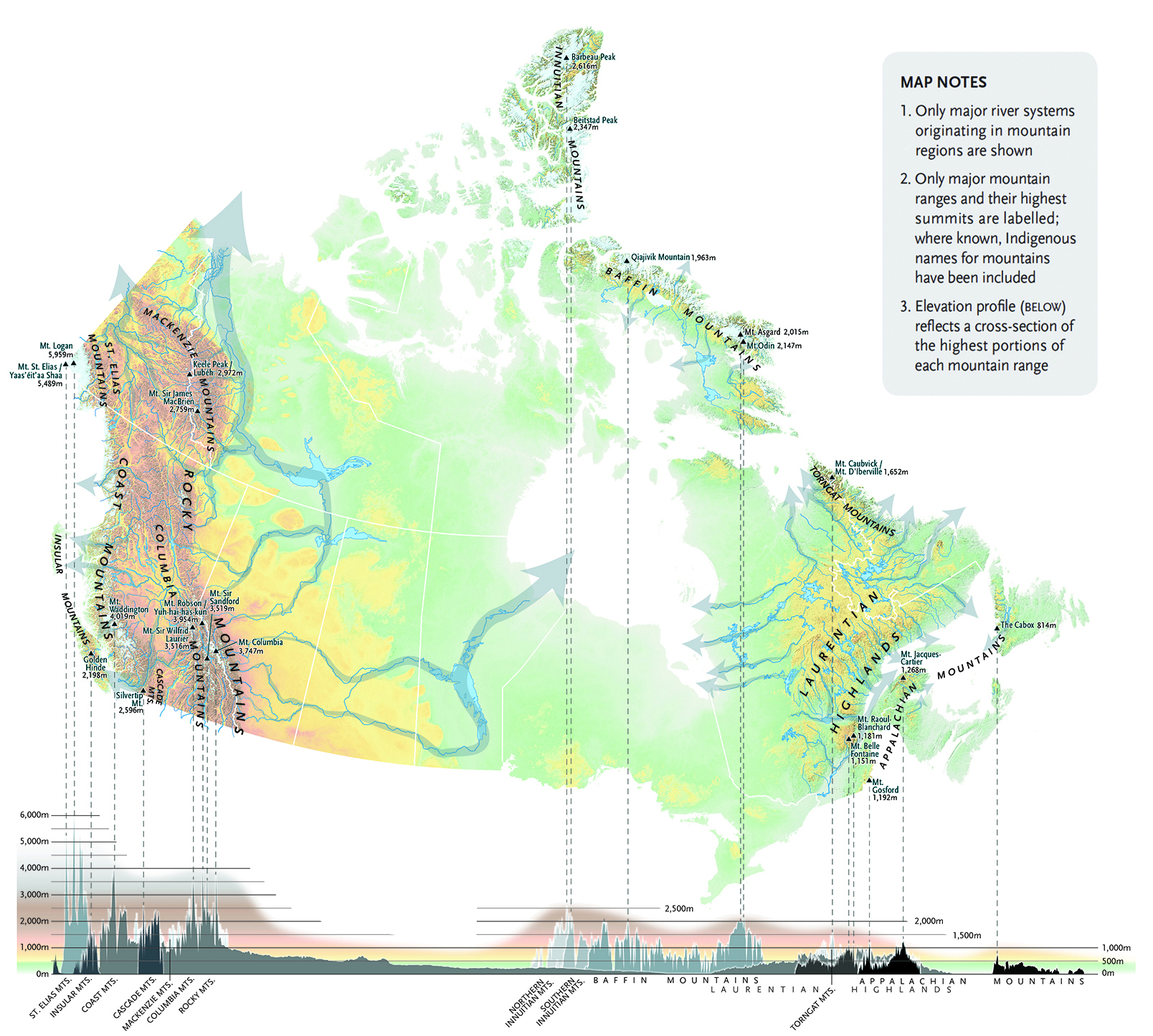 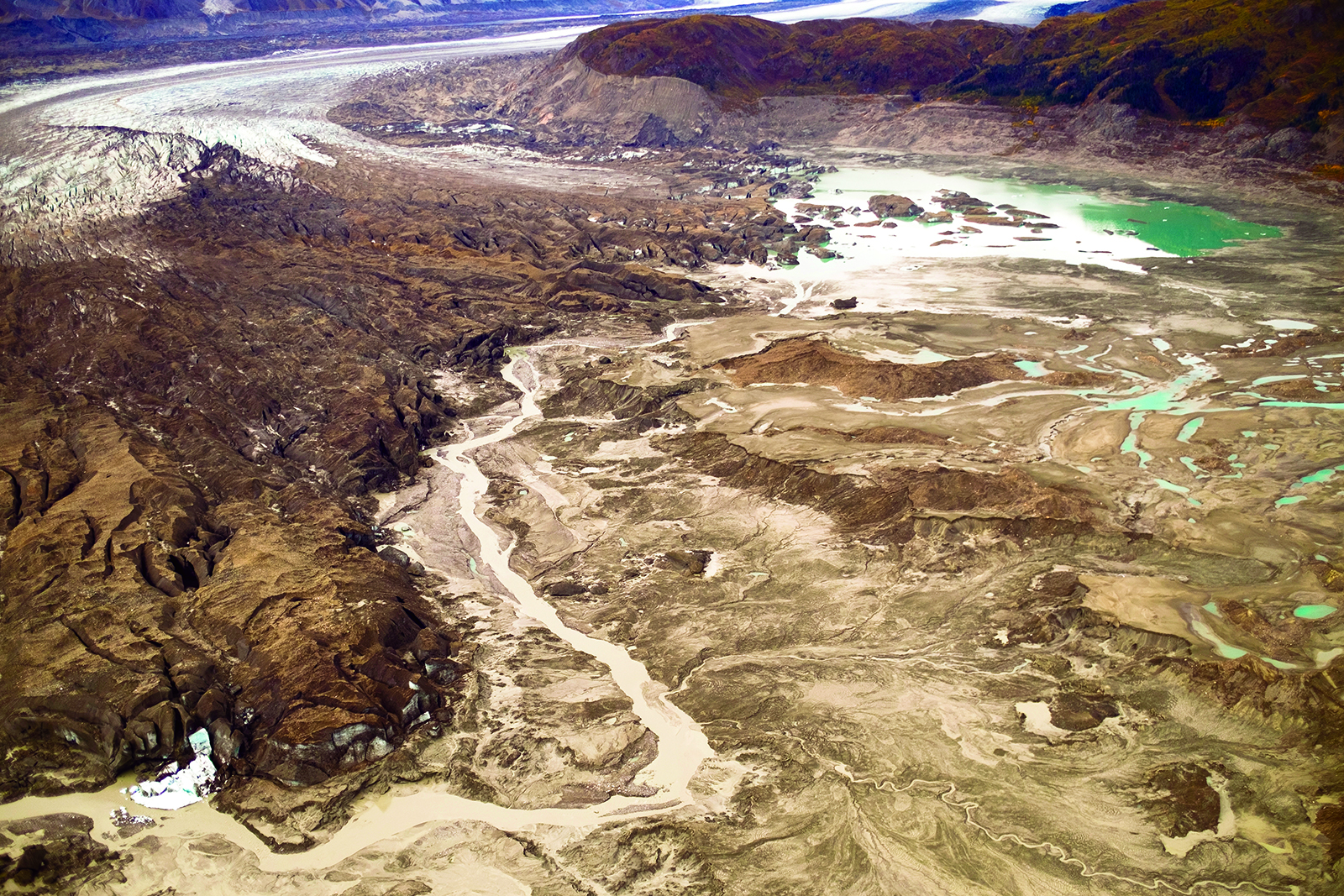 A meltwater stream snakes along the front of Kaskawulsh Glacier, draining a lake that formerly fed Slims River. In 2016, the river was cut off from its source, according to the ACC. (Photo: Dan Shugar)

The major river systems of Europe, Eurasia and North America were shaped by the repeated formation and disappearance of Pleistocene ice sheets (2.6 million years ago to 11,800 years ago), among them the three largest watersheds in the great mountain chains of northwest North America — the Yukon, Columbia and Fraser watersheds. Although watershed reorganization of this magnitude is not possible today because these ice sheets no longer exist (except in Greenland and Antarctica), climate warming is driving this process in mountains that still support large amounts of glacier ice.

Case in point: over four days in May 2016, southwest Yukon’s alpine Slims River stopped flowing. The enormous Kaskawulsh Glacier in the St. Elias Mountains had retreated so far that its meltwater (which for centuries had gushed north down the Slims and ultimately west to the Bering Sea) suddenly started running south to the Gulf of Alaska along the Alsek River. Today, the Slims remains a mere trickle. The study of this “river piracy” event, published in the journal Nature Geoscience, described the reconfiguration as most likely permanent and calculated a 200-to-one probability that it was a direct result of human-caused climate change.

The end of snow sports in the coastal mountains? 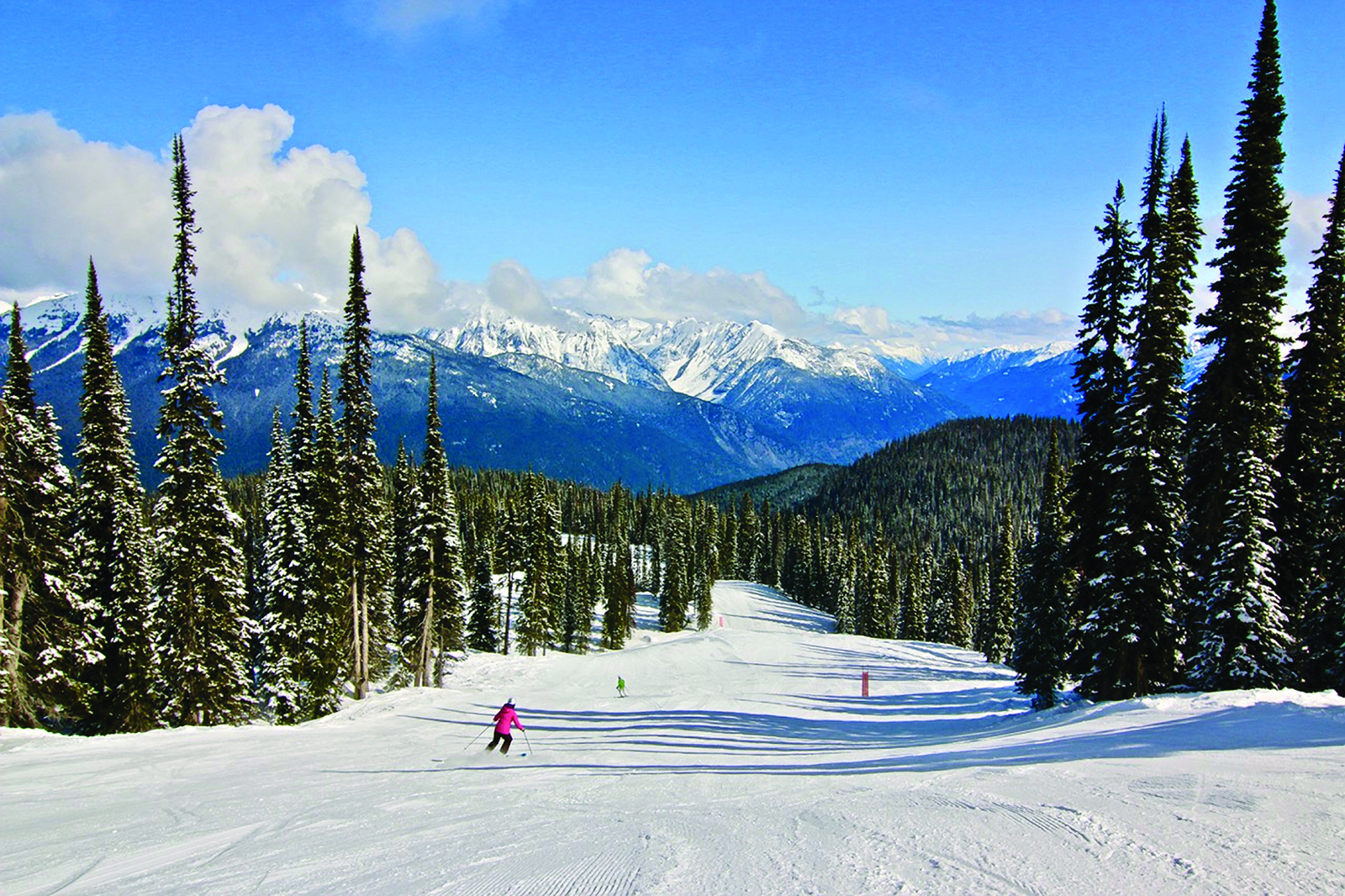 Big White Ski Resort in Kelowna, B.C. could be at risk of shorter seasons due to climate change. (Photo: Michael Pidwirny)

In the winter of 2015, temperatures at Cypress Mountain, B.C. were so high that the resort was out of action for much of the ski season. Based on a 115-year climate dataset generated by ClimateBC and ClimateWNA, scenarios like this could become much more common.

The changing climate of Western Canada’s ski resorts is disguised by a lot of variability. But beneath the scatter, the emerging trend is a worrying one. Between 1901-2015, the average winter temperature of Cypress rose by 1.5 degrees Celsius.

The fate of these resorts very much depends on the success of efforts to tackle climate change. In a best-case scenario, with a temperature rise of two degrees Celsius, the coastal mountains of Washington, Cypress and Hemlock will be too warm to support skiing and snowboarding by the end of the 21st century. A worst-case scenario, with three to five degrees of warming, might see none of the coastal resorts being able to support snow sports.

Visualizing changes in the mountain landscape

At a glance, Canada’s mountains might seem little changed today from how they appeared a century ago, but comparative photographs highlight some major landscape-level changes.

The Mountain Legacy Project utilizes the world’s largest collection of historic mountain photographs dating back as early as 1861. Since 2017, a group led by the University of Victoria’s School of Environmental Studies have re-taken more than 7,000 of the photos, which illustrate mountainscapes from Alberta to B.C. to the Yukon. By comparing the photographs, the team have identified some stark differences: glaciers are retreating, forests are marching uphill and wildfires have etched their marks into the landscape. Using these photos, the project seeks to understand how and why mountains change over time. 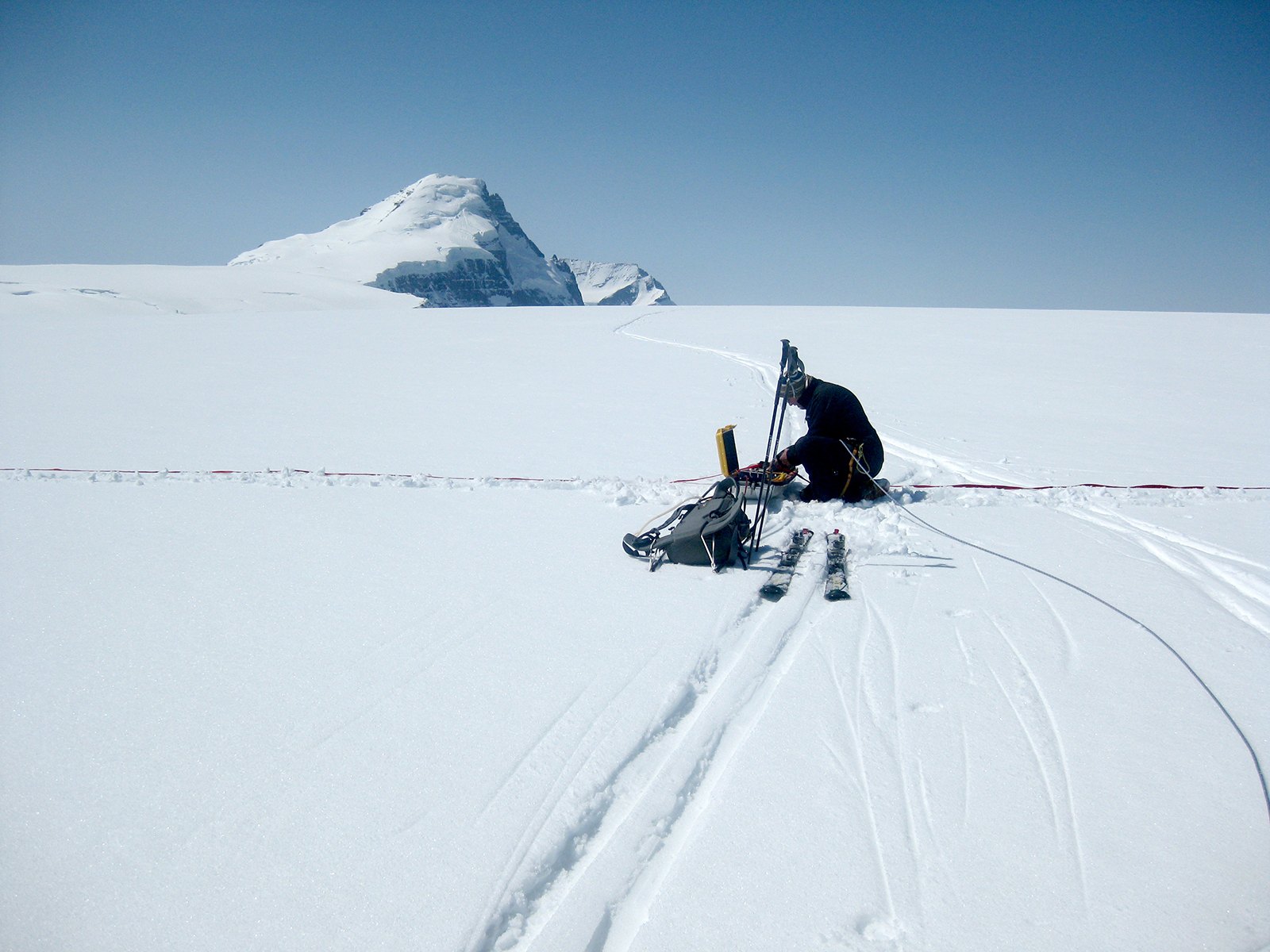 Glacier researcher Mike Demuth, a professor at the University of Saskatchewan, works on the plateau of the Columbia Icefield. (Photo: Mike Demuth)

Excepting Greenland and Antarctica, Canada is home to more glaciers than any other nation on earth. But not only are Canada’s glaciers retreating in coverage, they’re also declining in mass. In short, in many areas, ice is being lost and not replaced.

Recent reports suggest these imbalances are unprecedented on a global scale and that their consequences could be wide-reaching. Melting glaciers do not just contribute to rising sea levels, but compromise the ecosystem services they provide. For example, glaciers provide a source of water when others are in short supply. They also act as travel corridors for both man and beast: animals can access critical habitats while human explorers can adventure to otherwise inaccessible terrain. Future projections predict that glacial retreat will only continue into the future, a sobering prospect for Canada’s glaciers and the benefits we reap from them.

Conservation on the hoof 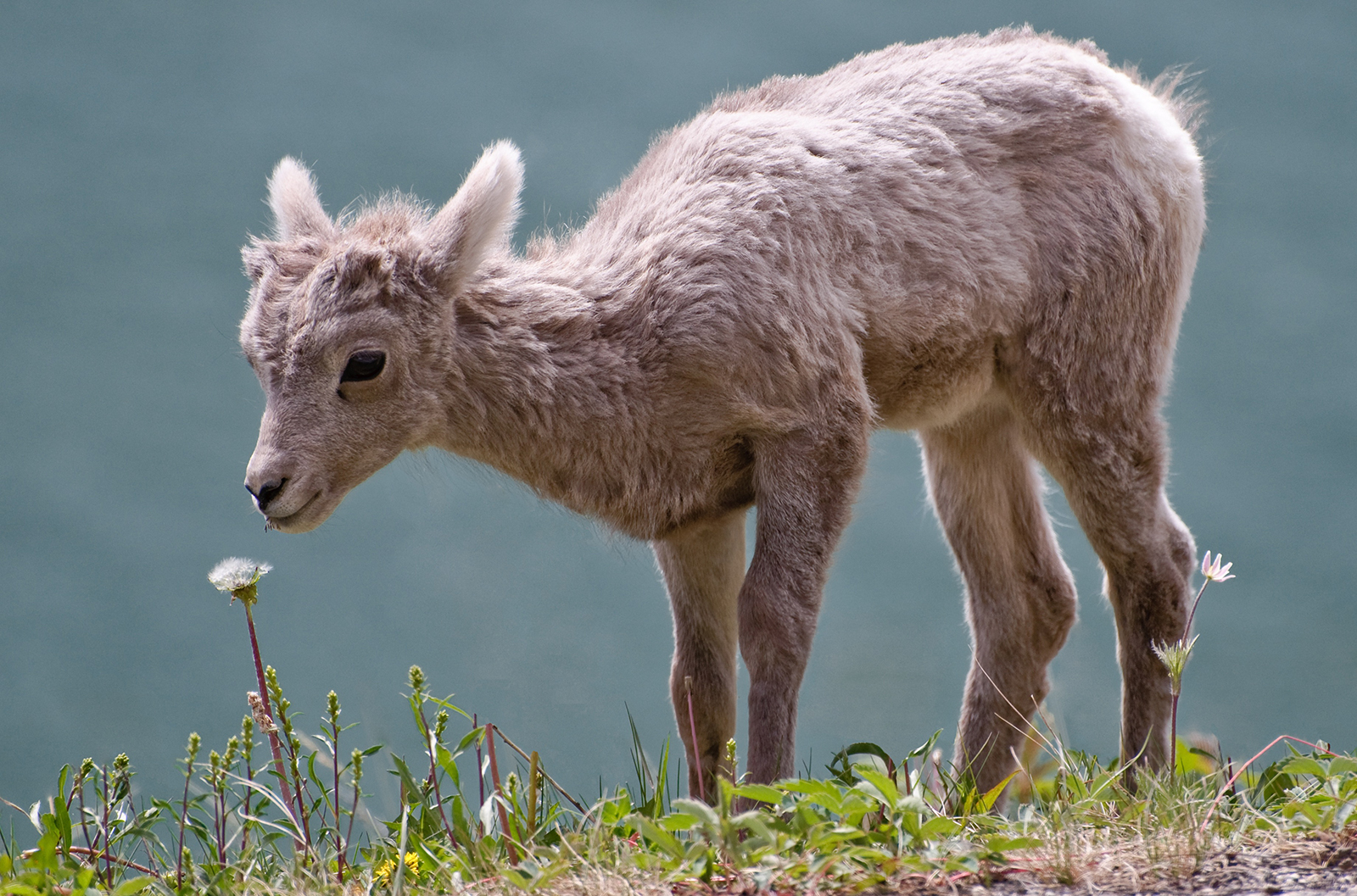 Baby bighorn lambs, like this one in Alberta, are at risk from all sides: disease, hunting and habitat loss. (Photo: Philipp Haupt)

Canada’s peaks are home to three species of mountain ungulate, that is, hoofed mammals like goats and sheep. They include the bighorn sheep, the thinhorn sheep and mountain goats. While the ranges of these animals haven’t changed much, they are facing a number of human-induced pressures.

Canada’s mountain ungulates are at risk from habitat loss and fragmentation. Diseases from domestic sheep are spreading to their bighorn relatives, resulting in up to 80 per cent die-offs and reduced lamb survival. Trophy hunting is creating an artificial selection pressure on mountain sheep, with demonstrated declines in horn size for rams. Conservation strategies might have to be put in place to prevent Canada’s mountain ungulates from declining to a state of conservation concern.