How Canada's cougars are on the rise — and what that means for us
By Niki Wilson
July 21, 2021

As Siobhan Darlington approached the tangled branches of a forestry slash-pile between Rock Creek and Grand Forks, B.C., her tracking gear beeped ever faster. A six-year-old female cougar named C10 that Darlington had been monitoring through a satellite-linked collar was beneath the debris. Three months earlier, Darlington had set up a remote camera at one of C10’s deer-kill sites and caught her and a male cougar taking turns rolling around in the dirt. She suspected the bizarre dust bathing to be mating behaviour, but the camera hadn’t caught the two in the act. Now, Darlington had noticed C10 settle into one spot and wondered if she was denning — the timing was right. She set out with field technician Kieran Braid to investigate, and as they approached the slash pile, they paused and listened intently. In the stillness, they heard the unmistakable mewing of kittens only days old. Darlington pulled out her camera, and through the telephoto lens caught the penetrating gaze of C10’s yellow eyes, fixed on them through the branches. 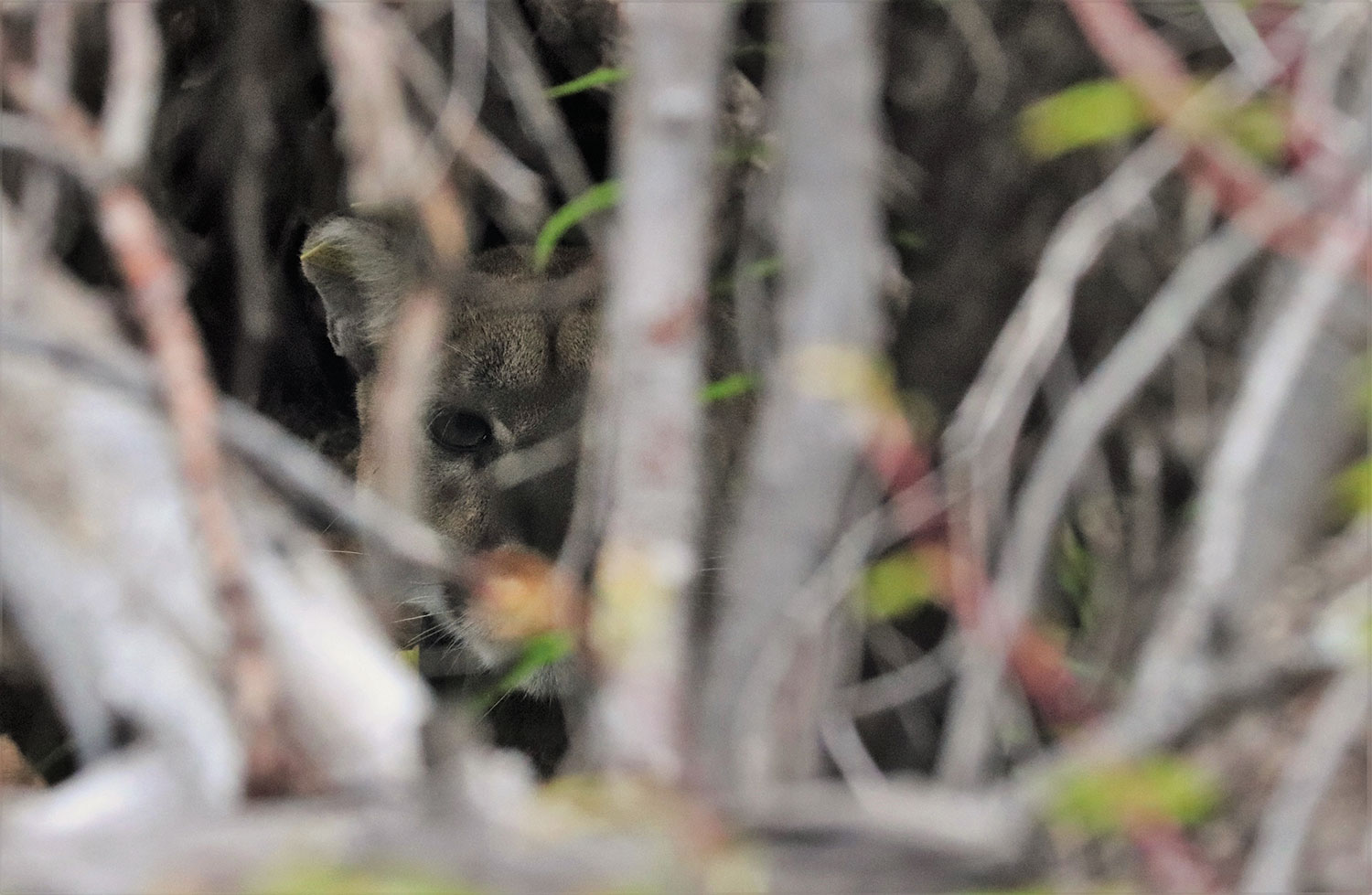 The cougar known as C10 peers through the branches of her den where she was rearing her kittens. (Photo: Siobhan Darlington)

A month later, Darlington and her team found C10 once more. Cougars generally avoid people, and when they got closer, C10 left the den long enough for the team to affix ear tags to the fluffy, blue-eyed kittens already larger than a house cat. “They have pretty big claws, so we had to wear thick gloves while handling them,” she says.

The experience was a career highlight for Darlington, a PhD student researcher at the University of British Columbia, Okanagan, who works with the Southern B.C. Cougar Project. The project team studies cougar behaviour across 15,000 square kilometres of varied terrain in the West Okanagan, Boundary and Kootenay regions. In the years to come, C10 and her kittens will help them learn about how females travel with their young, where cougars go after they leave their mothers and how cougars interact as they develop their own territories. The team is part of a growing research community working to understand cougar relationships to each other, their prey and their habitat. The work is made more pressing as cougars push back into their historical range, creating opportunities for those interested in both hunting and protecting them — and understandable concern for people wary about sharing landscapes and prey species with the elusive cat. 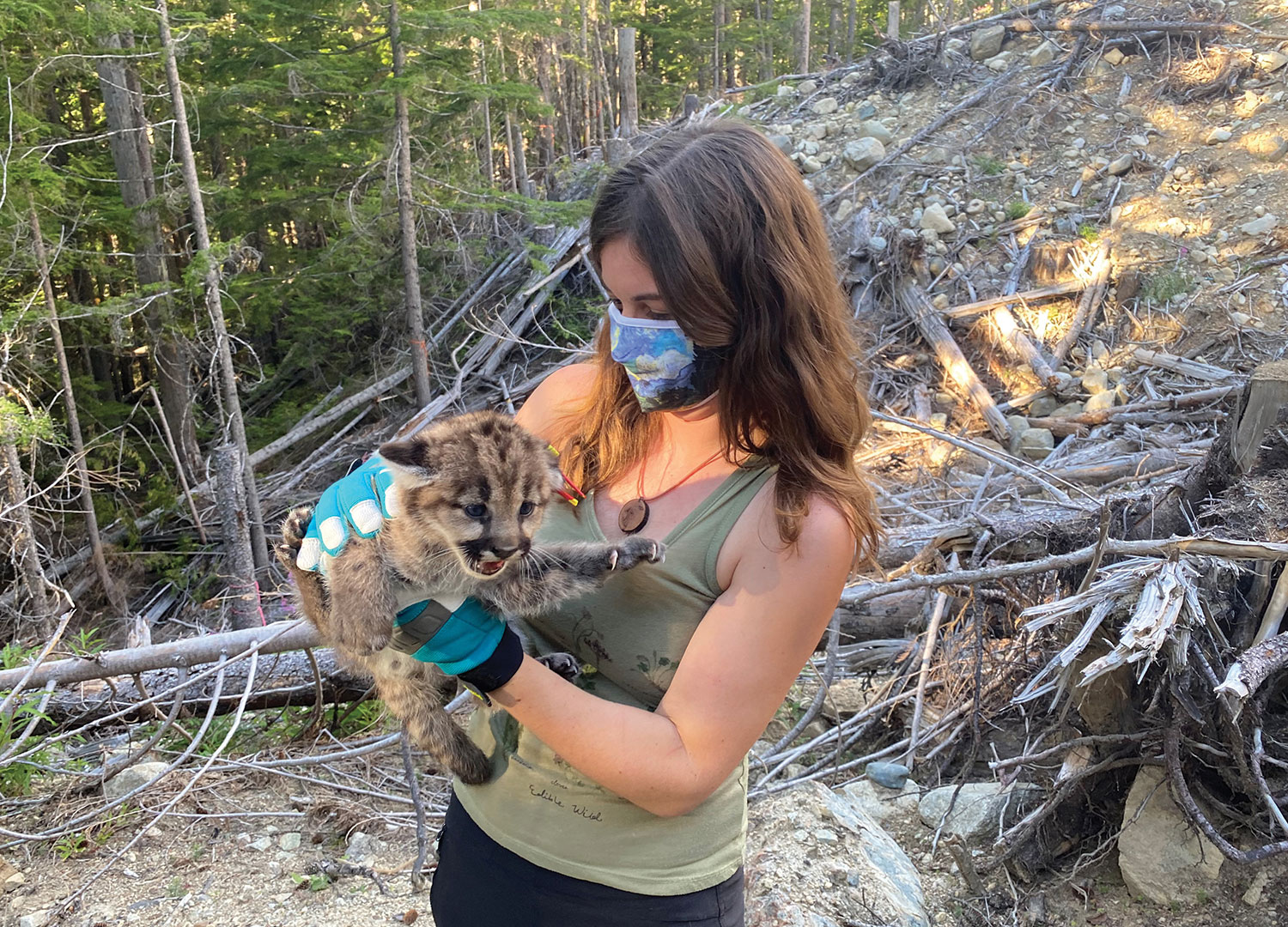 "Out of fear the cats would hurt their families, take livestock and compete for wild food such as elk and deer, cougars were trapped poisened and shot."

Cougar populations began to plummet in the 1800s following European settlement and declines in wild prey. Out of fear the cats would hurt their families, take livestock and compete for wild food such as elk and deer, cougars were trapped, poisoned and shot. Bounties rewarded their destruction, and their historical range in North America, which once stretched from the East to West coasts and from the southern tip of Chile to Canada, was reduced by more than 50 per cent between the mid 1800s and mid 1900s.

Over time, though, the public developed a more sympathetic attitude toward the cat, and in the 1960s and ’70s cougars were legally designated as big game in many states and provinces, affording them some protection as a managed species. Since then, cougar populations have continued to recover. There are likely anywhere between 5,500 and 9,000 animals in Canada — more data is needed to refine this estimate. Most of the established Canadian population now lives in Alberta and B.C.,  long with small populations in southern Yukon and Saskatchewan, and possibly Manitoba.

The cougars’ comeback is thought to be partly linked to the return and expansion of abundant prey, particularly white-tailed deer. At a time when carnivore numbers were diving in the early 1900s, white-tailed deer populations began to flourish after protective legislation put an end to the overhunting that threatened to wipe them out. With reduced hunting pressure from people and carnivores, the highly adaptable species then proliferated across the country, making use of new habitats including the fields of Canada’s expanding “breadbasket.” Now, climate change is helping white-tailed deer push into the northern reaches of most provinces, and into the Yukon and Northwest Territories. Cougars appear to be following, branching out into historically new areas and returning to places they haven’t been seen in almost 100 years. 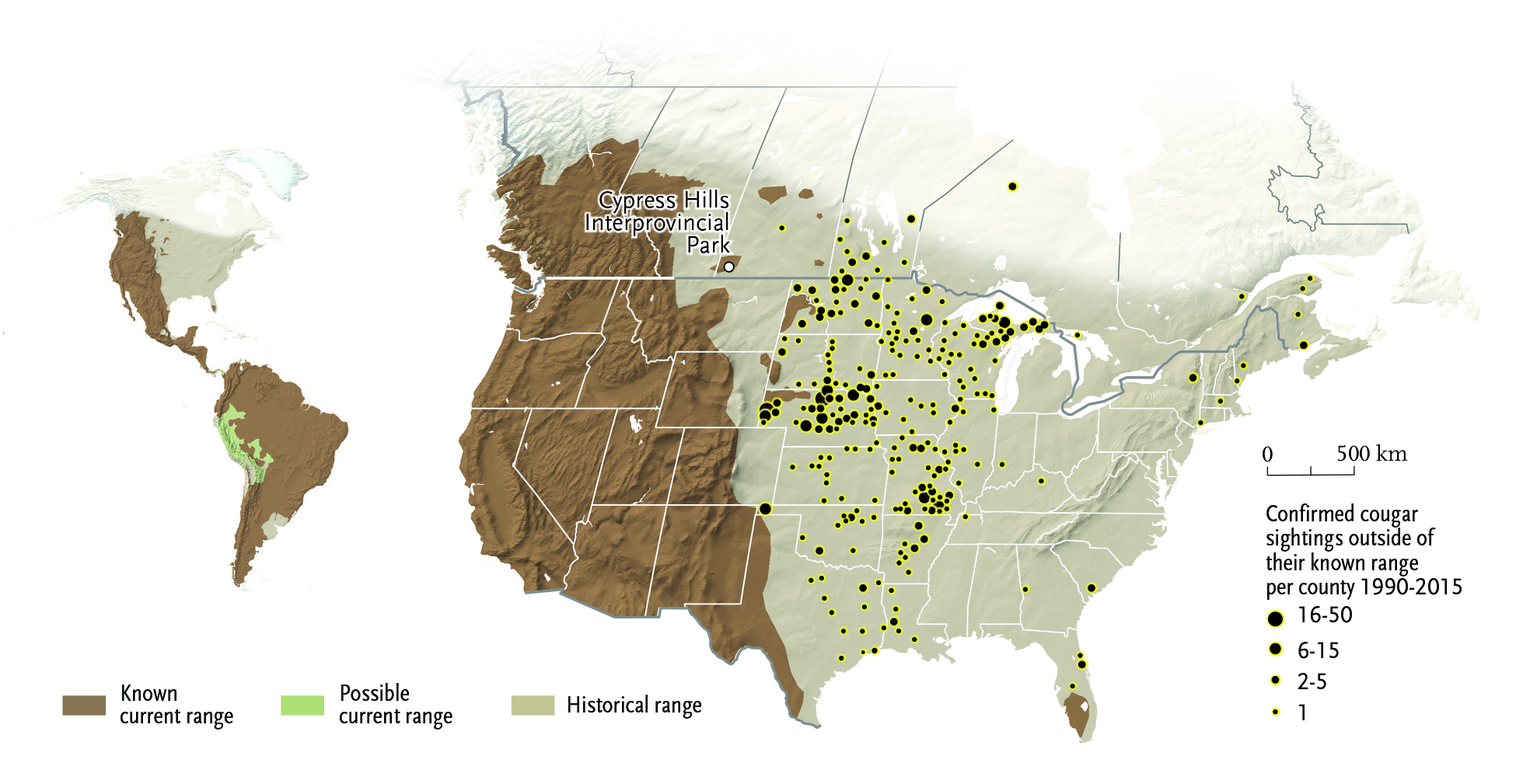 One of those places is Cypress Hills Interprovincial Park, a forested oasis in a sea of agricultural land that straddles the border of southeastern Alberta and southwestern Saskatchewan. Along with his students, Mark Boyce, professor of ecology at the University of Alberta in Edmonton, studied cougars in the park from 2007 to 2014. At one point, the team found one of the highest densities of cougars in North America — roughly six to eight animals (including kittens) for every 100 square kilometres. “There was so much food for them, they just had a heyday,” says Boyce. With abundant deer and elk to feast on, the cougars also appeared to have little interest in livestock on surrounding farms.

Since then, cougars have established themselves in Saskatchewan and are regularly sighted in Manitoba. Newly independent cougars will travel great distances to find new territories. One young male travelled 750 kilometres from Cypress Hills eastward through the agricultural belt of northern Montana and southern Saskatchewan. It padded soundlessly through rugged terrain and moved like a shadow under the cover of brush along wetlands and waterways, perhaps feasting on white-tailed deer to sustain the journey.

While deer are thought to be a cougar’s preferred food source, researchers have found evidence that some cougars specialize in other prey. “We documented one big male in the Nordegg area that in one year killed 17 wild horses, five moose, four elk and two deer,” says Boyce, adding that the horses weighed more than 450 kilograms each. He points to another case nearby where in 1993 and ’94 a female cougar zeroed in on bighorn sheep in an area known as Ram Mountain, Alta., killing nine per cent of the population and 26 per cent of the lambs in a single winter. “She had a pretty substantial effect on that local population,” he says.

Darlington has also been observing this behaviour in a bigger female in her study area, who seems to prefer feasting on young moose. A moose meal lasts longer — up to 12 days, as opposed to the meat of a deer that staves off hunger for only a week. Understanding what cougars are eating and where is a critical piece of Darlington’s work, aimed in part at understanding patterns of cougar predation on mule deer. Unlike their proliferating cousins, mule deer have been declining across their range since the 1950s. In two of Darlington’s study areas, mule deer are killed more by cougars than by other predators. Still, whether or not cougars are contributing to declines remains to be determined, as researchers tease out the role of other factors such as invading white-tailed deer and landscape changes from clearcuts and forest fires. 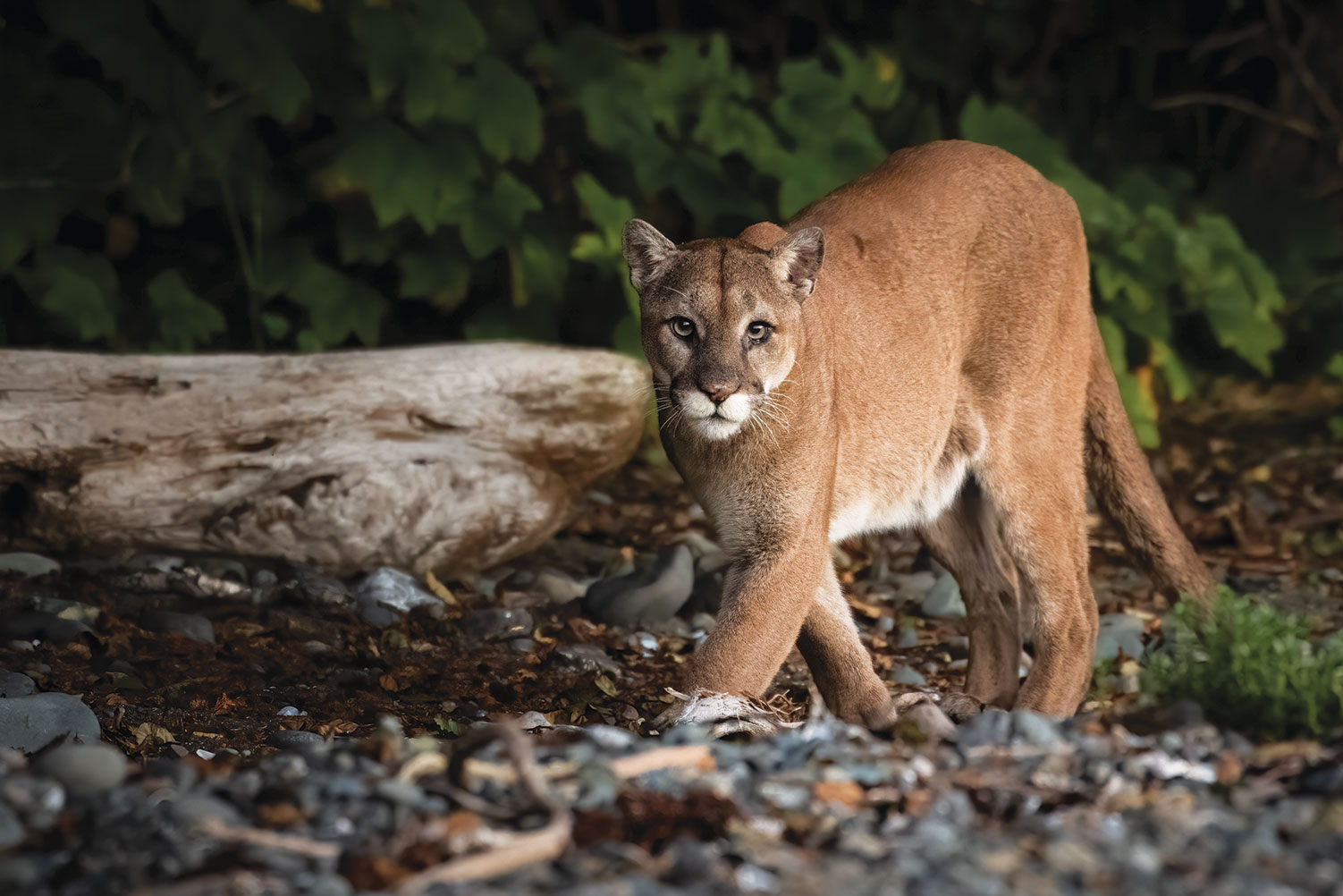 Cougars are wary and tend to avoid people, which is why estimating their populations and mapping their range is so difficult. (Photo: Jarrett Lindal)

Darlington's data could help inform future cougar management in British Columbia. Historically, provincial managers have relied on evaluating trends in humancaused mortality — such as vehicle collisions, hunting and lethal control by conservation officers tasked with addressing human-wildlife conflicts. Though these trends help paint an overall picture, there are limitations to this approach. For example, data used to assess patterns of conflict and collision are skewed to where people live and drive, and hunter harvest data is collected only during hunting season in the winter. This makes it hard to really understand how cougars use different landscapes at different times, and to know for sure how many individuals there are. “It also doesn’t account for other factors that may be influencing cougar numbers,” says provincial large carnivore specialist Garth Mowat. For example, there may be natural fluctuations in cougar populations as prey populations rise and fall. “Deer numbers appear to go up and down every 15 years or so in the Pacific Northwest, and cougars tend to follow,” says Mowat.

The province is looking more closely at the sustainability of the cougar hunt through studies in two regions with the highest harvest rates — the region south of Cranbrook and west-central Vancouver Island. Combining information from these studies with the work coming from the Southern B.C. Cougar Research Project, Mowat says, will help the province assess whether it needs to take a more hands-on cougar management approach, similar to the system Alberta has in place.

Cougar hunting in Alberta is managed through a quota system that restricts the number of cats that can be taken from any of the 32 cougar management areas in the province. These quotas take into account other sources of human-caused mortality, including cats that are accidentally caught in wolf snares (an average of 35 a year) and cats that are legally killed by private landowners when they deem cougars to be a threat to themselves, their pets or their livestock. Wildlife managers aim to sustain a provincial population of at least 1,500 cats. At last estimate, there were about 1,559.

"As they approached the slash pile, they paused and listened intently. In the stillness, they heard the unmistakable mewing of kittens only days old.' 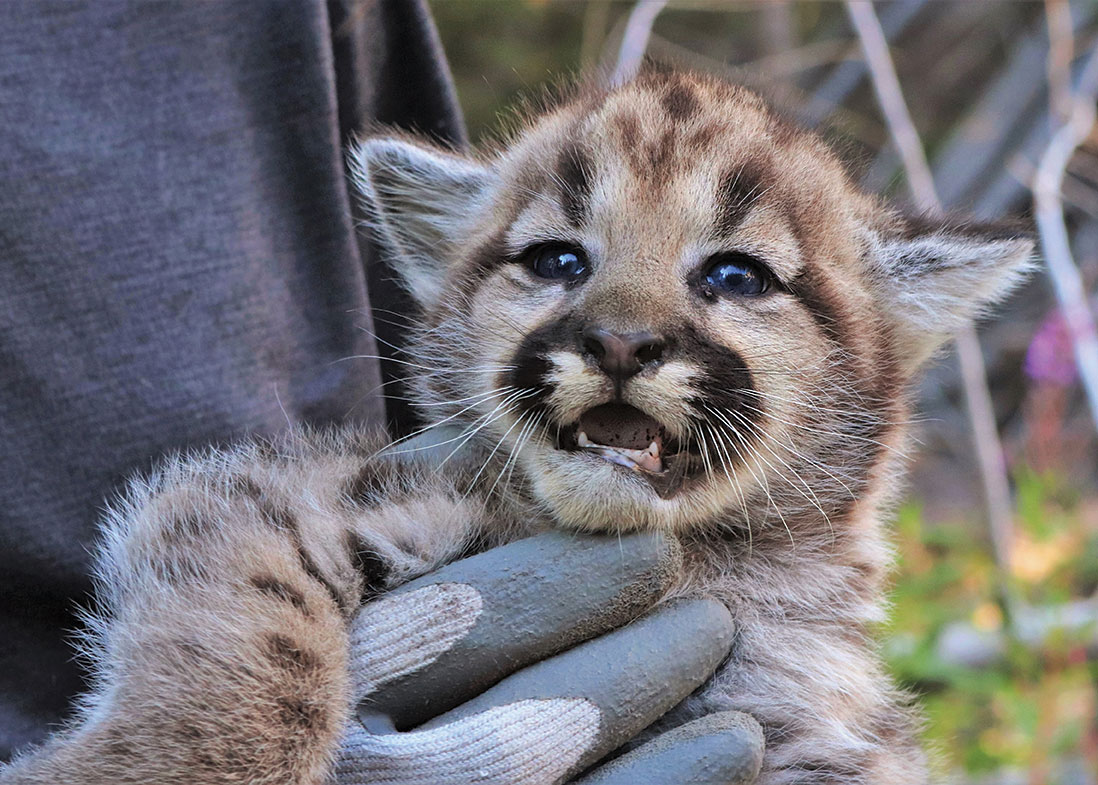 One of the cougar C10’s kittens: C10-A. (Photo: Siobhan Darlington) 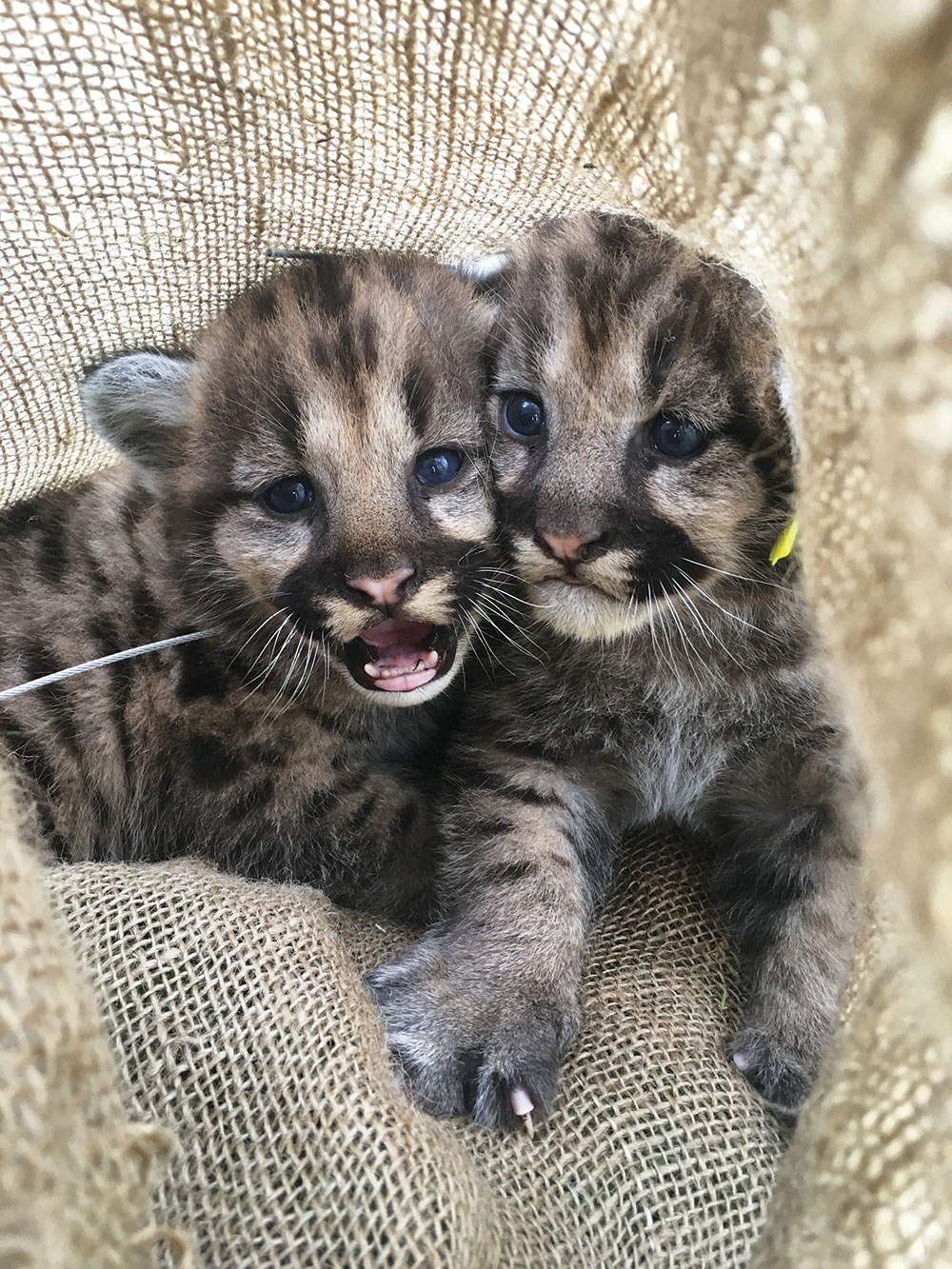 At the age of four to six months, biological information can be collected on cougar kittens. (Photo: Delaney Frame) 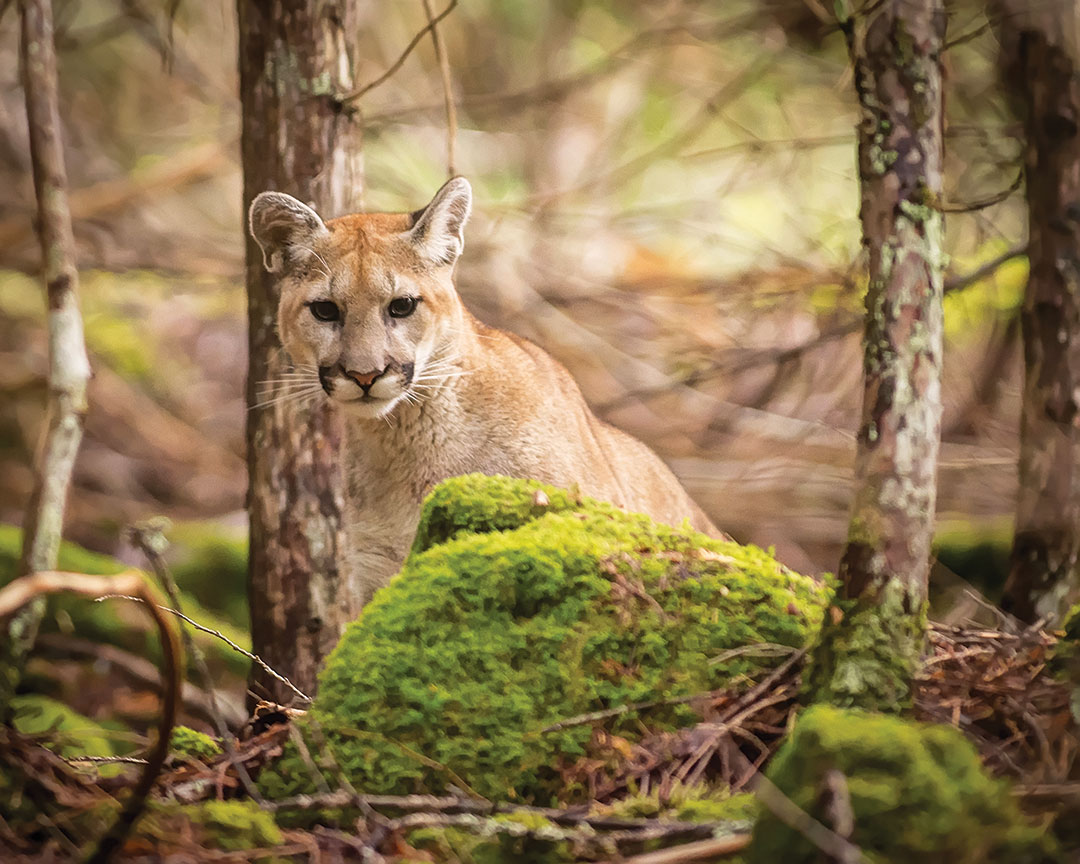 A female cougar camouflaged among the trees near Nelson, B.C. (Photo: Mike Handley)

In a growing cougar population, some suggest using the cougar hunt to control numbers, thereby increasing opportunity for big-game hunters and reducing potential humancougar conflicts. However, it’s not that simple, says Paul Frame, Alberta’s provincial carnivore specialist. Cougar hunters prefer to take older, larger toms (males), but growing evidence suggests these senior cats have a stabilizing effect on cougar populations by holding territories and defending them against younger, dispersing males. “If you’re removing too many of these old toms, you’re creating vacancies for younger toms to move in,” explains Frame. “And while the young ones are establishing and exploring this new territory, they tend to be more tolerant of each other.” This can lead to more — not fewer — cougars in some areas, and the new cats on the block are often adolescents that tend to have more conflict with people. It’s why, in 2019, Alberta followed the science and lowered harvest rates in some areas in an attempt to stabilize the older portion of the cougar population. The province will continue to monitor the population to see if this strategy works.

Though cougars are a challenge for wildlife managers, the return of these elusive cats is a testament to their adaptable nature and their ability to thrive everywhere from deserts to boreal forest to rainforest. At a time when the future of so many of the world’s wild cats hangs in the balance, says Frame, “it’s a good news story that we are managing an expanding and increasing population, as opposed to trying to pull them back from the brink.