Protecting and restoring Canada’s forests and wetlands may be a great long-term way to mitigate the changing climate
By Brian Banks
November 9, 2020

The 485-million-hectare boreal zone, stretching from Yukon to Newfoundland and Labrador, contains 25 per cent of the world’s remaining intact forest. It also holds 25 per cent of the world’s wetlands, mainly in the form of peatlands, a rich “living carpet” of mosses, bushes and saturated organic matter. Together, these biomes store more than 200 billion tonnes of carbon — equal to five or six years’ worth of global fossil fuel emissions.

Farther south, B.C.’s coastal temperate rainforest is Canada’s most productive carbon storehouse, per hect- are, followed by the temperate forests of the east. Though they are degraded by development, wetlands in these regions include additional peatlands, freshwater mineral wetlands (such as swamps, marshes and fens) and, along the East and West coasts, salt marshes and seagrass beds with still more carbon-absorbing potential.

Today, as concerns grow over global warming, scientists and policy-makers are looking to natural climate solutions to protect and enhance these ecosystems’ capacity to store and sequester carbon.

“Evidence suggests that Canada’s land and seascapes have the potential to mitigate hundreds of megatonnes of carbon dioxide annually,” says Amanda Reed, director of strategic partnerships at Nature United.

When it comes to forests and wetlands, their variety and scale present different potential pathways to achieve these goals. Successful strategies will rely on combining them.

For example, measures to increase carbon sequestration — through afforestation (planting trees in non-forested lands, including cities) or wetland restoration (replanting, rewetting and selective tree removal in peatlands) — require a longer-term horizon. Forests need decades of growth before they store meaningful amounts of carbon. Dry or damaged peatlands, which emit carbon and are susceptible to wildfires when drained or damaged by development, need 10 to 15 years to show carbon storage gains after they’ve been restored. 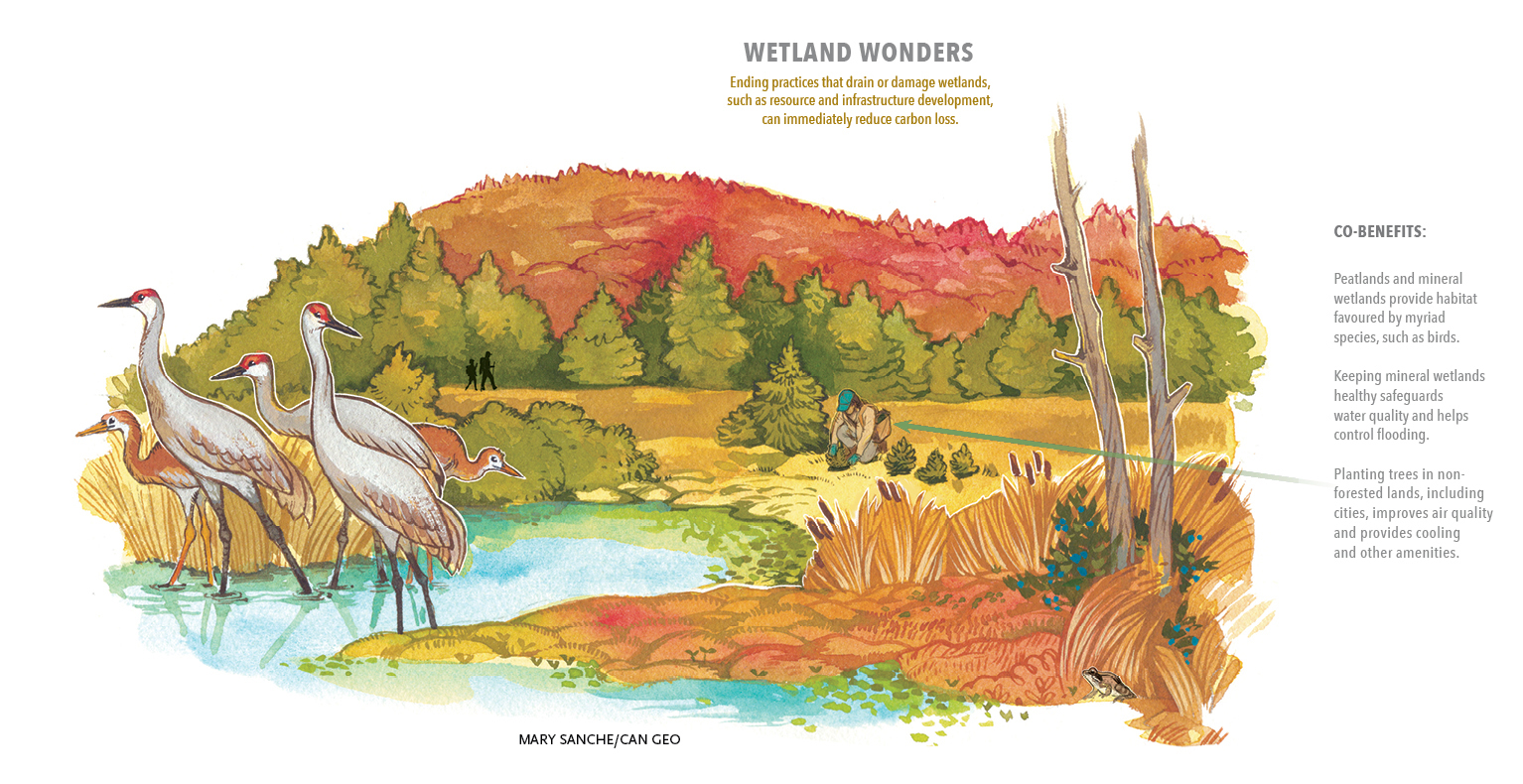 Canada’s land and seascapes have the potential to mitigate hundreds of megatonnes of carbon dioxide annually, with forests and wetlands making up the biggest chunks of that potential. (Illustration: Mary Sanche/Can Geo)

On the other hand, taking steps to reduce carbon loss from these environments (by cutting down fewer trees and improving forest management to enhance growth and reduce wildfire impacts, for example, or ending practices that drain or damage wetlands) can yield immediate gains.

While the climate crisis makes adopting all these approaches critical, natural climate solutions also simultaneously provide many co-benefits. Peatlands are rich ecosystems that offer habitat favoured by birds such as the sandhill crane and palm warbler. And keeping wetlands healthy safeguards water quality and helps control flooding elsewhere. With forests, meanwhile, more trees in urban areas improves air quality and provides cooling and other amenities. In communities reliant on local forests for food, jobs, recreation and culture, the co-benefits are more holistic. A case in point is the Coastal First Nations Great Bear Initiative in B.C., a partnership of nine First Nations, whose rainforest protection and management practices support an extensive carbon offset program.

“The Nations’ principles for working together [stemmed] from a great concern for the impacts on nature and the disappearing natural environment and to provide solutions for health, safety, food security and, ultimately, our economy,” says Paul Kariya, a Coastal First Nations senior policy adviser. “It also meant getting young people engaged ... to have something that roots them to their culture.”