Canyoning down the Spiral Road: First descent of Waffl canyon

Mt. Robson is not so much difficult as dangerous. It is no mountain to trifle with. - Newman Waffl
By Katie Graham
With photography by Katie Graham
February 8, 2021

The daylight faded long ago.

The light from my helmet illuminates my hands as I weave the wet rope through my rappel device and twist the safety lock closed. My fingers poke through my gloves where the neoprene is worn off; hours in the cold water has made them stiff and clumsy. My eyes follow the orange line down to make sure it isn’t caught on any rocks. I double check my bag is attached to my harness before I allow the water to take control of the PVC behemoth. The bag is carried over the lip of rock and I brace for the jerk when the rope attached to me goes tight. Once the force of the water’s pull is consistent, I unclip my cow’s tail and begin repelling. The rope travels through my hands as I descend into the pounding water. All I see is the curtain of water reflected back at me. The excited droplets jump off my helmet and shoulders. I’m deafened by the drum of water, I feel gravity on the rope, the push and pull of the waterfall, I keep my eyes down because the back of my head deflects the water and creates an air pocket where I can breathe.

I land in a pool on a rock shelf, the water is pushing up my thighs. A millennia of glacial melt water has carved a tight, circular ramp. The water drives 180 degrees around the roller coaster and I relish the novelty of this playful act of nature disobeying gravity. I linger in the mid mountain tidal wave. Stepping through the spray, I emerge on the other side and the water becomes predictable again. I follow a curved chute down, landing in another pool. I climb onto a bank of rocks for a temporary reprieve from the push of the water and its cold embrace. Looking up, I am awe struck by the spectacularly clear sky; the inky backdrop of a million candles, the silhouette of the formidable Yexyexéscen (Mt Robson), and my friend descending through the waterfalls. The refraction of his light is spectacular and chaotic. Water rolls over an edge and spreads into a mass of droplets. The ricochet of the water bouncing off his shoulders makes his frame look larger, like he has an invisible shield with huge shoulder pads. He looks side to side showing off the water curtain, and then he looks down and a crystal peacock shoots up. He is looking at the gravity defying rooster tail, and I better understand the sensation I felt moments ago, pushing through the tidal wave’s force because there is only one way to get down. I have goosebumps; it is so beautiful, yet we are so vulnerable and insignificant, soaking wet, tired, in the dark.

It will be two more hours before we collapse on a carpet of moss delirious in the satisfaction of the first descent of Waffl Canyon. 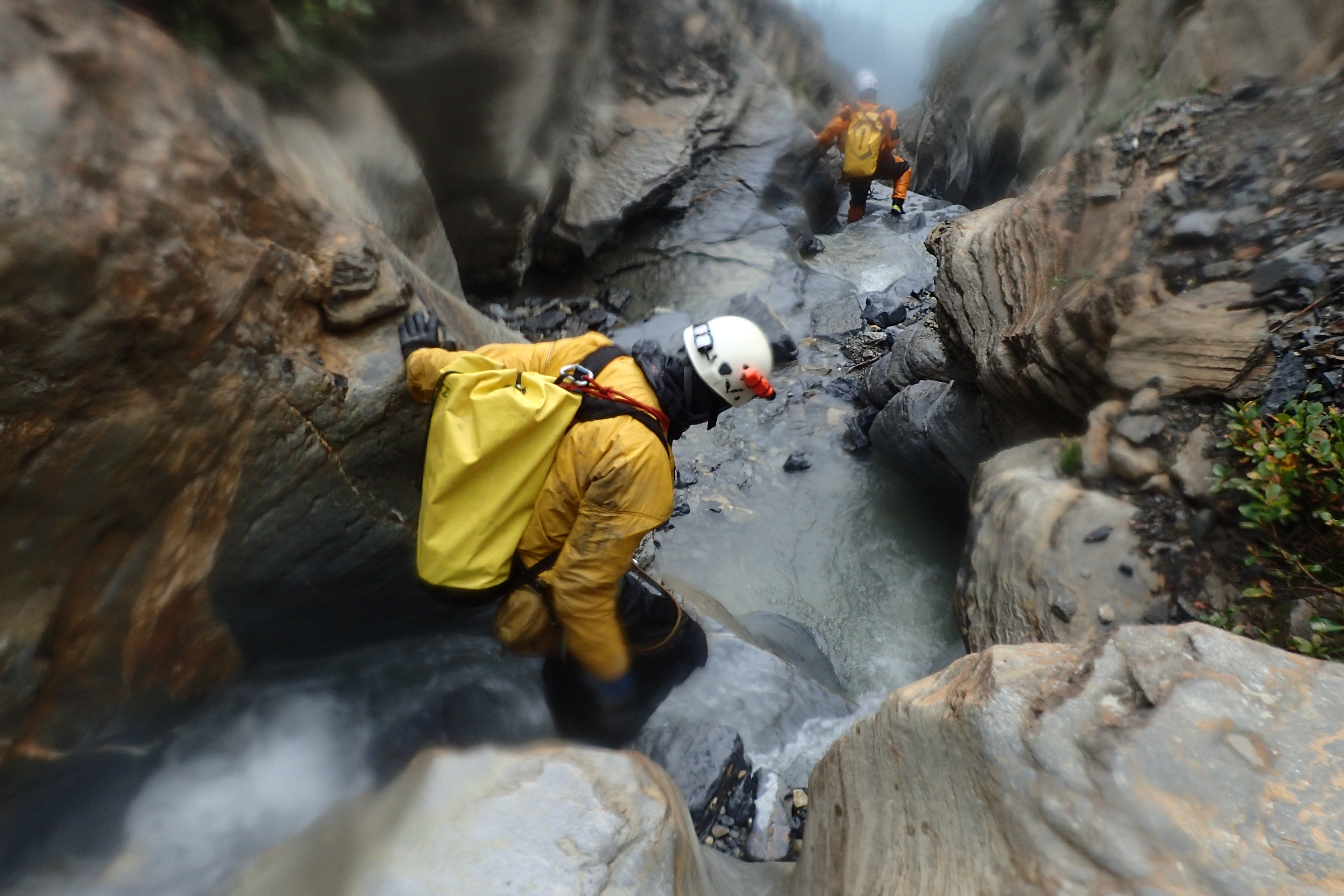 Yexyexéscen is an incredible specimen at 2,829 metres prominence. From the Yellowhead Highway it ascends to a height of 3,954 metres. The sharp rising walls and U-shaped valleys are a result of glaciers that flowed long ago. Yexyexéscen means “The Mountain of the Spiral Road” to the area's earliest known inhabitants, the Texqakallt Nation. It describes the layered cake appearance of the mountain. Native people played a major role in the early exploration by guiding and providing game to the men credited as the first explorers.

Yexyexéscen was first summited in 1913 by W. Foster and A. McCarthy with guide Conrad Kain. It remains a highly sought-after peak because of its aesthetic and challenge. Weather and snow conditions are predictably unpredictable. Newman Waffl (1879-1930) was a respected mountaineer from New York State. On his first trip to Canada in 1929 he summited more than eight mountains and was enthralled  with Mt Robson once he laid eyes on it. He returned the following year to summit his fascination. Waffl set out from a high camp alone on August 5, 1930. Footprints suggest he made it most of the way up but was turned around by steep, sheer rock. He was likely swept away by an avalanche. A box of raisins, a gum wrapper and his snow glasses were found. The slope Newman Waffl was swept down is the same drainage we were descending via the canyon. Waffl was fondly remembered by friends as being very safe and making good decisions in the mountains. More can be found on Waffl in the Canadian Alpine Journal past issues.

It took four years to complete the Waffl Canyon project. It is a 1,200 metre descent with 51 waterfall rappels. The first day is a steep, 1.5 kilometre vertical hike with backpacks full of dry suits and harnesses so we can rappel in the frigid water, waterproof containers with sleeping bags, so we can camp along the way, webbing, ropes and back up gear for the obstacles along the way. The first evening we shelter at the forlorn Ralph Forester Hut. The second day we traverse along cliff bands, and cross couloirs, passed the ominous Wishbone Arete, a prominent rock rib route to the summit that is complicated, treacherous and swallows lives when the weather is not in the mood to permit passage. By the afternoon of day two we are in the canyon until the early evening, we find a patch of trees and sleep hard and short. On day three we organize gear and start again by descending the canyon by 8 a.m. The September 2020 team: Greg Horne (Jasper), Guillaume Coupier (Field), Matt Kennedy (Jasper), Colin Magee (Canmore), and myself, Katie Graham (Calgary) completed the canyon by midnight and camped near Kinney Lake. 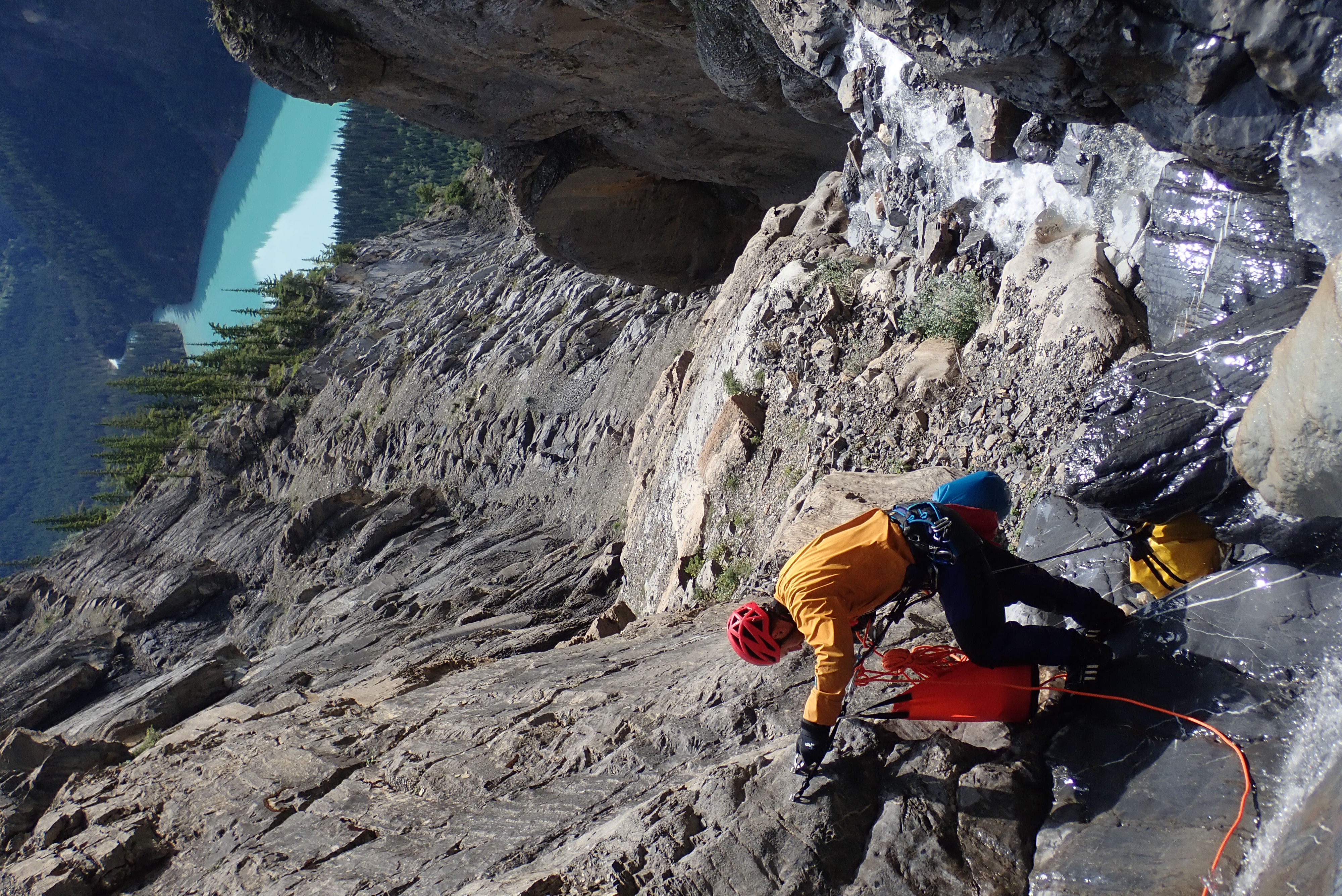 It takes 15 to 45 minutes to rig a rappel, and we knew Waffl would have dozens of rappels. In 2016 we began near the bottom of the canyon, and rigged sections of the canyon. It took four trips to rig all 51 pitches.

In 2017 we attempted the full canyon. Greg Horne (Jasper), Gavin Elsley (Calgary), Colin Massey (Calgary) and I did the massive hike up and traverse of the mountain. On our third rappel the rope was severely damaged by sharp rock. We cut the rope, which was very worrisome so early on. The next day we faced a conundrum. We were looking into an exciting but committing section of waterfalls. The walls were very high, the canyon was narrow and the drops were long. Based on photos and maps we expected no opportunity to escape for a vertical 300 metres; which could mean we needed to rig 15 or more rappels. It was 3 p.m., and there was threatening rain clouds blowing in from the west. We looked at each other, and knew this was the wrong time to be optimistic. We made the safe choice to forego the rest of the canyon, but that didn’t mean there was an easy hiking path down. The west side of the mountain is dramatically steep. We used photos to landmark ledges we could climb down and to note the cliffs that were taller than the ropes we had. We rappelled off numerous trees and thrashed through thick brush. At other times the foliage was sparse and parched with steep climb downs. Many times, I searched for a branch to grab for moral support, but there was nothing. We kept going until long after dark, hoping for a water source; around midnight we gave up. We had one litre of water to share between us. We could choose either a hot drink or oatmeal, but it was wonderful to lay down with a warm belly. We each chose a tree and laid our sleeping bag on the high side to prevent us from rolling down the embankment.

The next morning, we packed early and made fast progress in the daylight. We must have looked like quite a sight when we arrived at Whitehorn campsite. The hike to Berg Lake is a popular hiking trail and most people make civilized plans to hike, camp and enjoy the scenery. We rolled in like a soggy band of misfits and shoveled food into our mouths as fast as possible. The 2017 trip was character building and provided great familiarization to plan a successful trip in September 2020.

Canyoning is a growing sport in Canada. A few entrepreneurs are offering exciting sport tours for people to experience canyons in BC, Alberta and Quebec. The Canadian Canyoning Association was formed in 2020 to ensure canyoning grows as a safe sport that balances exploration, conservation, and the excitement of pounding water in beautiful locations.