Cattle grazing helps to conserve endangered grasslands as well as the habitat for many species at risk
By Dana Reiter
October 7, 2020

As a child growing up on a wheat farm in southern Saskatchewan, my parents sat us down at the kitchen table one day with a wildlife biologist. The biologist had discovered some burrowing owls, an endangered species, in the horse pasture on our farm. He asked my parents if they would join Operation Burrowing Owl and leave that habitat untouched. It was pasture for my horses, so it was an easy thing to agree to, since the pasture was native grass we left alone for my horses to eat. I was excited about having these beautiful, endangered owls on our farm, along with a bright yellow sign to be displayed at the entrance to our farm with our family name and a burrowing owl depicted, stating that we were part of this conservation program.

My excitement grew into wariness, however, as I began to understand that the best way to protect these owls was to leave them alone and not disturb their habitat. I remember explaining to the biologist that I rode my horses in the wheat fields most often, but for fun I would often hop on bareback in that pasture with just a halter and a rope lead and canter in the trees, sometimes grabbing an overhead tree branch and swinging off. My brothers and I also swam and rafted in the pasture’s pond and I was worried that he was suggesting that our local ‘playground’ would be closed. My little brother had put a lot of effort into building a tree fort in that pasture; would he have to now abandon it? I imagine my parents would have hesitated at this idea as well; they knew that, as farm kids, we had to make our own fun and fill our days without neighborhood children to play with.

To our relief, the biologist said that we could carry on as we had been, and just try not to disturb the areas he would show us as we walked the large pasture with him. We were all able to enjoy the pasture together, horses, owls and kids! In the years since, Operation Burrowing Owl has worked with hundreds of landowners just like my family, who have conserved more than 170,000 acres of grassland habitat for these owls — without having to change their farm and ranch practices.

Many people don’t know this, but the most endangered landscape on Earth is native prairie grasslands. These grasslands have all but disappeared around the world due to urban sprawl, being plowed to grow crops, oil and gas development, and climate change. There used to be 141.5 million acres of prairie grasslands across western Canada, and now only 26 million acres remain. Canada’s prairie grasslands support more than 60 different at-risk species, including the burrowing owl, swift fox, northern leopard frog, black-footed ferret, prairie rattlesnake and the peregrine falcon.

The government is supporting agricultural producers who carefully manage their land

These memories became very fresh to me in the last few years as I undertook postgraduate research evaluating how ranchers felt about participating in the Species at Risk Partnerships on Agricultural Lands program; an initiative of Environment and Climate Change Canada. I interviewed ranchers who joined the voluntary program, which provides results-based incentives to those who agree to protect species at risk habitat on their land. The program was delivered in southwest Saskatchewan by the Saskatchewan Stock Growers Association, who partnered with not-for-profit organization South of the Divide Conservation Action Program Inc. They developed species at risk programming options for cattle ranchers who are managing critical or important habitat for species at risk on grasslands in the area. The overall goal was to protect species at risk, their habitat, and maintain biodiversity and a healthy ecosystem on ranches. In 2018-19 they had 35 projects totaling more than 220,000 acres under agreement. There are many species at risk in this area of Saskatchewan grassland, but South of the Divide has directed its main efforts toward conserving birds such as the prairie loggerhead shrike, greater sage grouse, Sprague’s pipit, chestnut collared longspur, and McCown’s longspur, as well as the elusive swift fox and the northern leopard frog.

South of the Divide began delivering species at risk programming in 2016. Three years later, in 2019, I interviewed the participating ranchers to gain an understanding of what parts of the program they liked, and what parts they would like to see changed to better work for them. Through these interviews I found that the ranchers felt a lot like my family did all those years ago when we were asked to protect habitat on our farm — they were very happy to participate, especially as they did not have to make any major changes in how they managed their ranch and grassland ranges. 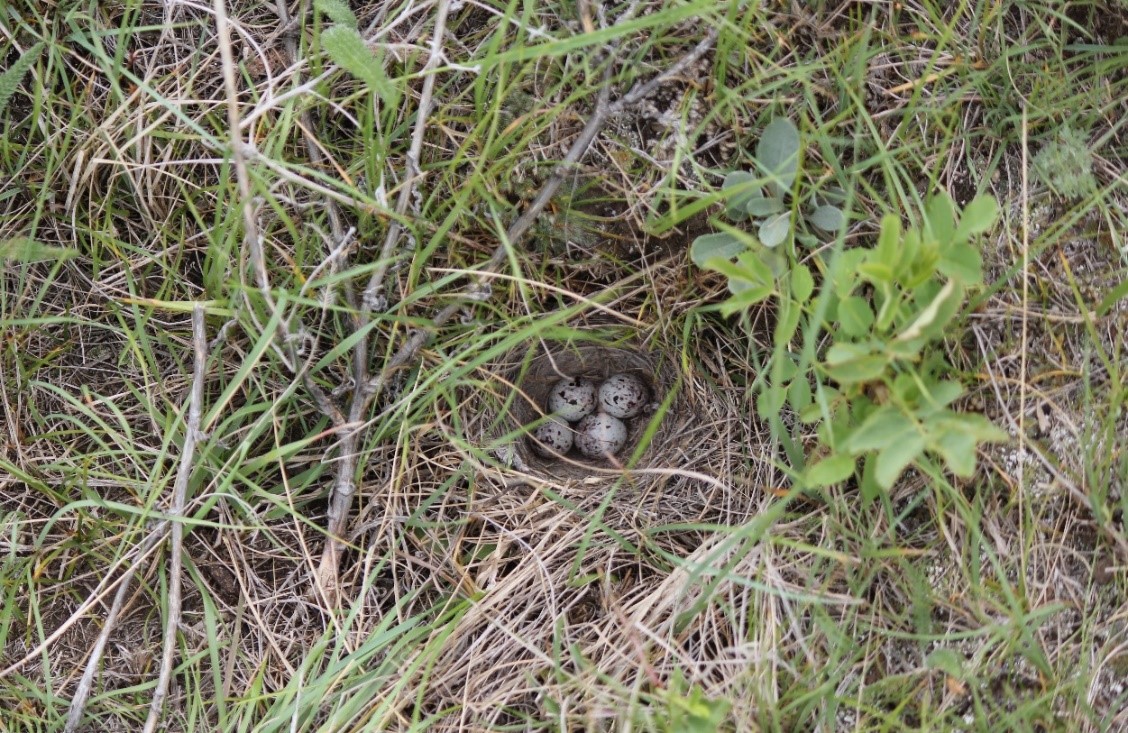 Ranchers enjoyed being in this conservation program

All of the ranchers involved in the program felt as though being in the program was beneficial to them. They also appreciated that it was not a prescriptive program, it was flexible, and the individual contracts signed were developed with input from the ranchers. The majority of ranchers most appreciated that they were not asked to make major changes to how they managed their range and they also felt good about being recognized and rewarded for good stewardship practices.

“I felt that we were managing our grass in such a way that it was a good fit for our operation to be recognized and rewarded for proper grass management," says one rancher. "As well as having the data along with everyone else saying that ranchers are the best environmentalists and stewards of the land.” Finally, they also really liked having the program delivered by a local organization which employed regional ranchers at every level of the organization.

Most of the ranchers had been on their land for many generations and were proud of carefully managing the native grasslands to be able to leave a healthy ranch for their own kids.  One person said his family has owned their ranch for 105 years, and another noted that their ranch has been family owned since 1908.

“Well, we’re just trying to have a healthy, viable ranch," one rancher explains. "We’re just doing what we’ve always done and if it’s healthy for the cows it’s healthy for everything. Our job is looking after the land that looks after us.” Through participation in this voluntary stewardship program, these ranchers actively conserved habitat for species at risk and were rewarded for their stewardship.

Conservation on privately owned and managed lands makes a difference

Recent studies have shown that the majority of Canadians want to conserve endangered habitat and species at risk. Yet the government cannot protect it all on its own. Ranchers own and manage large tracts of the last remaining grasslands, and through their careful, voluntary stewardship, they are able to contribute to integral conservation efforts. Carefully managed cattle grazing conserves both the grasslands and the habitat for many species at risk.

Cattle, like the bison before them, graze the range in a way that leaves varying levels of grass in different areas — some grass will remain tall and other areas will be grazed to almost nothing — fertilized by manure which provides nutrients to the soil and many insects, which, in turn, feed many birds. Species at risk are able to live in the grassland range that is most suited to them; and, by not plowing the land and planting crops, the ranchers preserve Canada’s last remaining grasslands, providing critical habitat for many species at risk. Through my research experience, I shared the pride the ranchers felt in providing safe, locally sourced beef for our country, just as our family provided wheat; while all the while contributing to the greater good of protecting critical habitat for many species at risk so that all Canadians may enjoy their presence for generations to come.

Read more about the project.