Despite a few curveballs in the form of a typhoon and ongoing political protests, a group of young Canadian geographers proved themselves to be among the best in the world this past week at the 16th International Geography Olympiad in Hong Kong.

Ben Woodward, a former Canadian Geographic Challenge Champion from London, Ont., took home a gold medal, placing 3rd in the entire competition — a first for Canada at iGeo — while newcomer Andrew Ding of Mississauga, Ont. claimed a silver medal, one of only 29 awarded to iGeo participants.

Woodward, Ding, and teammates Jake Douglas of Peterborough, Ont. and Jerry Sun of Burnaby, B.C., also won gold in the poster competition for their project on sustainability measures in the Greater Toronto Area. The team placed 17th overall, with Indonesia, the United States and the United Kingdom taking the top spots.

This is the second time that Canadian high school students have competed at iGeo. Last year, the Olympiad was held at Université Laval in Quebec City and Team Canada took home five medals. This year saw more than 160 students from 43 different countries vie for geography glory. 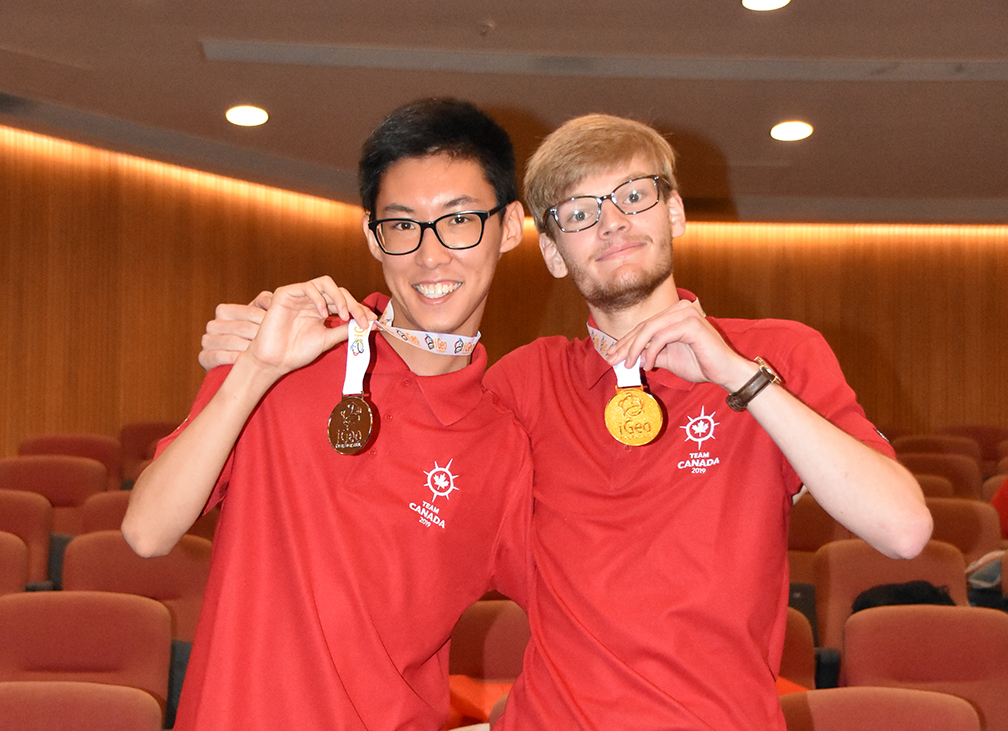 The competition is demanding; students must complete a written test, a fieldwork exercise and a multimedia test, which are marked by a committee of team leaders. Some of this year’s events were delayed by anti-government protests and heavy rain from typhoon Wipha. However, Team Canada remained in high spirits and demonstrated great flexibility, according to coaches Janet Ruest and Paul VanZant.

The poster competition required a lot of work before the team even arrived in Hong Kong. This year, teams were asked to put together posters about smart cities and sustainability and present them during a gallery walk session. Canada took advantage of the rain delays to practise their elevator pitch on the sustainability of the GTA. Winning both judges and attendees over, they also picked up the “favorite poster” title in addition to their gold medal.

In between official competition exercises, students had opportunities to explore the area, including an excursion to the Geopark, a UNESCO site and geography paradise. As the teams travelled by ferry to the Geopark, they came within a few hundred metres of the Chinese border and saw a remarkable deep sea port where thousands of containers were stacked on the dock. Inside the park, they strolled through lush forests, taking note of large spiders and butterflies.

“What I enjoyed the most at iGeo was being able to experience and witness what it is like to live in Hong Kong,” says Ding. “It had a completely different climate, landscape and culture which made you see both the similarities and differences of how people live around the world.”