What does it take to operate high-tech scientific facilities — including live-study growing chambers and necropsy, genomics and imaging labs — in Canada’s Arctic?
By John Bennett
February 28, 2019

With its curved lines and airy interior spaces, the Main Research Building of the new Canadian High Arctic Research Station (CHARS) campus was designed to feel welcoming. Located in the Inuit community of Cambridge Bay, Nunavut, it’s a place where scientists and Indigenous knowledge keepers work together to understand the effects of climate change on the Arctic and other issues facing the region. Inspiring young northerners to become scientists is also high on the agenda. 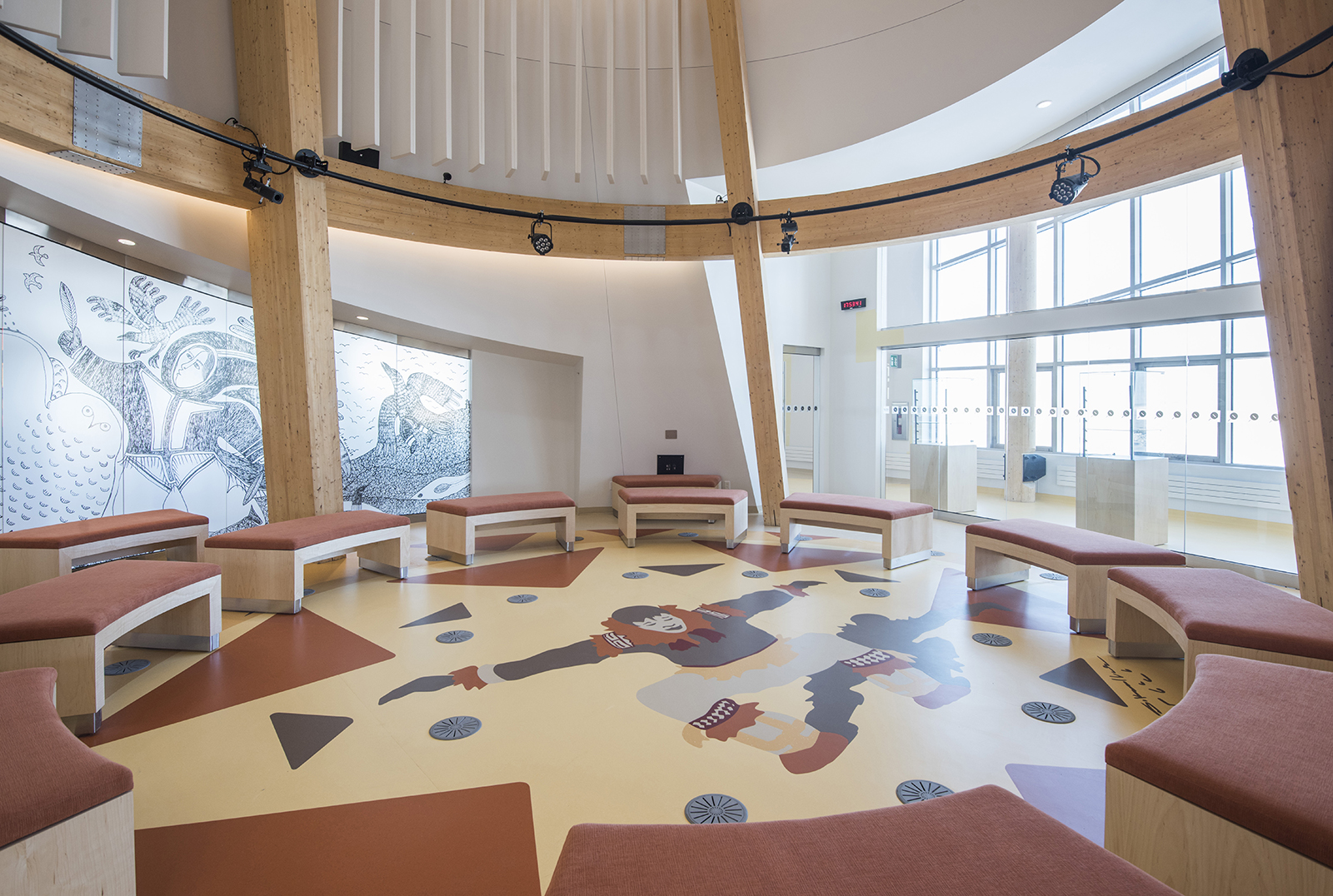 The Knowledge Sharing Centre features technology for live translations between local experts, visitors and CHARS researchers and — like the building’s other spaces — major artworks by Inuit artists. (Photo: Alex Fradkin)

At the heart of the facility, which is operated by Polar Knowledge Canada (POLAR), are its scientific laboratories, including a refrigerated room for analyzing snow and ice, a growth chamber where scientists will study living Arctic insects and plants, a genomics lab, an imaging lab and more. While most of the CHARS campus is now operating, the laboratories are being gradually phased into use as staff undertake the complex task of preparing the specialized equipment.

POLAR biologists Ian Hogg and Simona Wagner are in charge of the laboratories. Setting up a new lab facility from scratch, especially in the Arctic, is a once-in-a-lifetime opportunity that’s both challenging and rewarding. “It’s very satisfying to be enabling applied science and technology research in the North,” says Wagner. “The main challenge is the location. In Cambridge Bay, all the equipment has to come in by air or water.”

Because transportation is expensive and easily disrupted by bad weather, self-sufficiency and flexibility are key. “We’re a bit like a ship,” says Hogg. “Every piece of equipment has to have some redundancy built in. If we need two microscopes of a particular type, we have a third as a backup.”

One of the more impressive research spaces is the necropsy lab, essentially a 40-square-metre-plus operating room where veterinarians will be able to do research on animal carcasses. Wildlife health is an important area of inquiry at the CHARS campus, as wildlife is an essential food source for Inuit, and an animal’s condition can reveal much about the environment in which it lives. Equipped with a crane, the necropsy lab can handle anything from lemmings to polar bears to whales.

Wildlife health is an important area of inquiry at the CHARS campus, as wildlife is an essential food source for Inuit, and an animal’s condition can reveal much about the environment in which it lives.

The genomics lab, in contrast, will allow scientists to work at the molecular level, using DNA sequences to identify and study differences in animal and plant populations. The machines that produce these sequences, however, are complicated to operate and often need repairs (bringing a repair technician to Cambridge Bay is easier said than done), so for the time being POLAR will send its DNA samples south for sequencing. This may change in future, says Hogg. “There are new sequencing technologies that you can carry around with you, and they’re becoming much more reliable. We may soon be able to do this ourselves.” 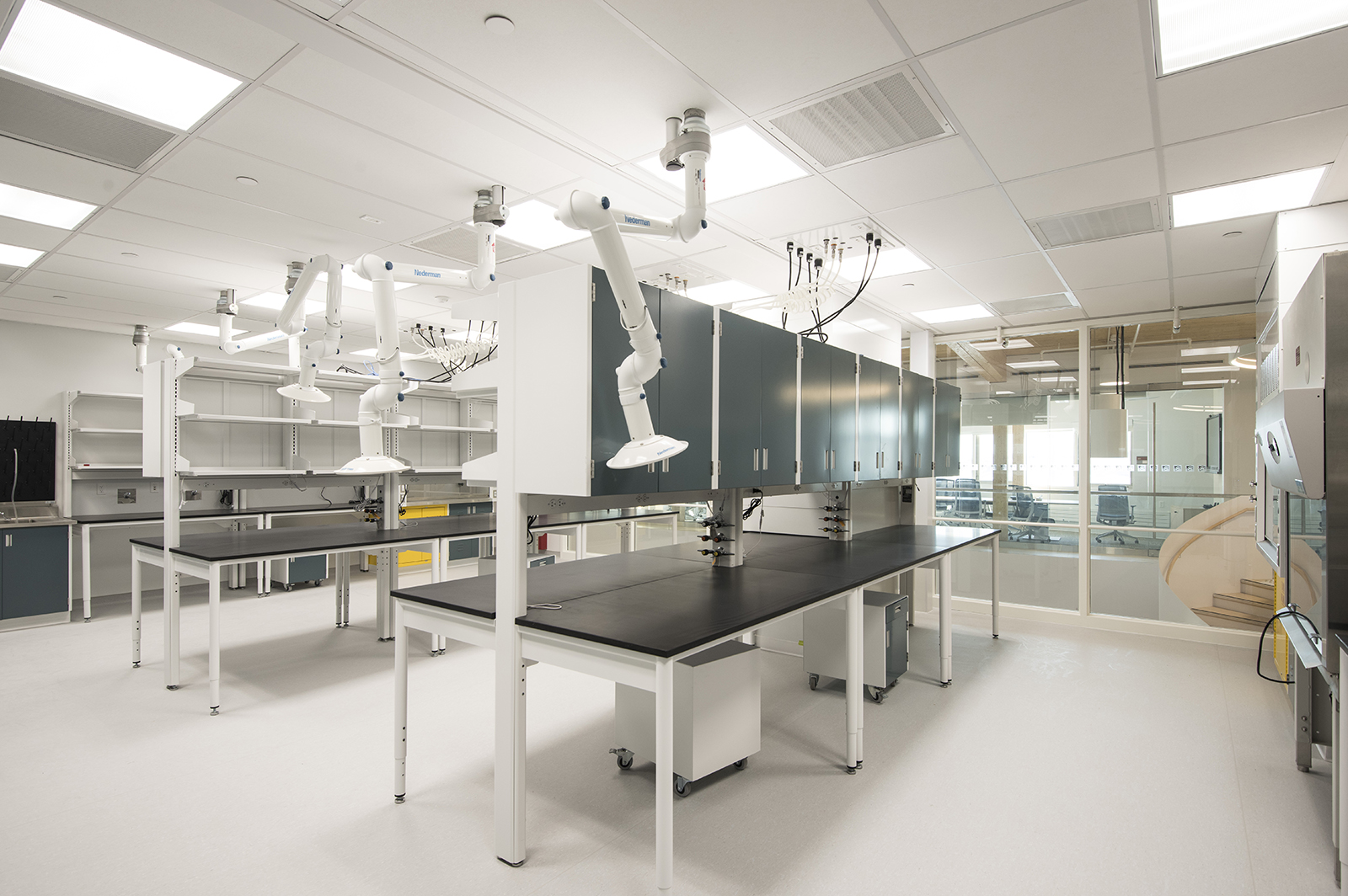 The genomics laboratory, where researchers will study Arctic flora and fauna at a molecular level. (Photo: Alex Fradkin)

Most exciting to Hogg is the facility’s potential for bringing children face-to-face with critical scientific research. When people from the community come to visit, he explains, one of the first things they will see are live images of the work researchers at the CHARS campus are doing projected onto 2½-metre TV screens at the front of the facility. This feed will originate in the station’s imaging lab, where microscopes hooked up to cameras are used to photograph specimens from the local environment such as mosses, plants, lichens, insects, mammals and skulls. One of the lab’s instruments, a scanning electron microscope, can show things in incredibly fine detail — the intricate patterns on the skin of a small insect, for example.

“Children are intensely curious and enthusiastic about the natural world, and when they see things of this nature they all have the same response, no matter their age,” says Hogg. “They’re absolutely in awe.”