In a spiral galaxy far, far away — 500 million light years away, to be exact — a mysterious repeating radio signal is making history with its patterned bursts.

“We conclude that this is the first detected periodicity of any kind in an FRB source,” the CHIME scientists announced in a paper published on Feb. 3.

Akin to the sound of a “down-slurred” (rapidly descending) bird’s whistle, FRBs have been capturing headlines since their discovery in 2007. Though FRBs have been randomly detected hundreds of times over the last decade, only 10 have been found to repeat themselves. This is the first case of a burst that is not only repeating, but on a regular cycle.

For more than a year, the Canadian scientists studied the mysterious bursts, which would continue on and off for four days. This would be followed by 12 days of silence before the cycle started again.

No one knows the origins of these patterned bursts, but some theories have been suggested by the scientists.

“The discovery of a 16.35-day periodicity in a repeating FRB source is an important clue to the nature of this object. One possible explanation is orbital motion,” they say, adding that stellar winds could also be causing these regular intervals.

These bursts are also turning heads because their origin is half a billion light years away, making them the closest FRBs located so far. According to the scientists, the location of the burst source within a given galaxy also provides clues as to what it could be and what it likely isn’t: “Given the source’s location in the outskirts of a massive spiral galaxy, a supermassive black hole companion seems unlikely, although lower-mass black holes are viable,” they say.

The origin of the FRB, however, is “almost certainly not” aliens, according to an article published by the Massachusetts Institute of Technology.

“The signals are a sign of energetic events that are on the extreme scale of the cosmos. Even a highly intelligent species would be very unlikely to produce energies like this,” they wrote. “There is no detectable pattern so far that would suggest there’s a sentient hand at play.” 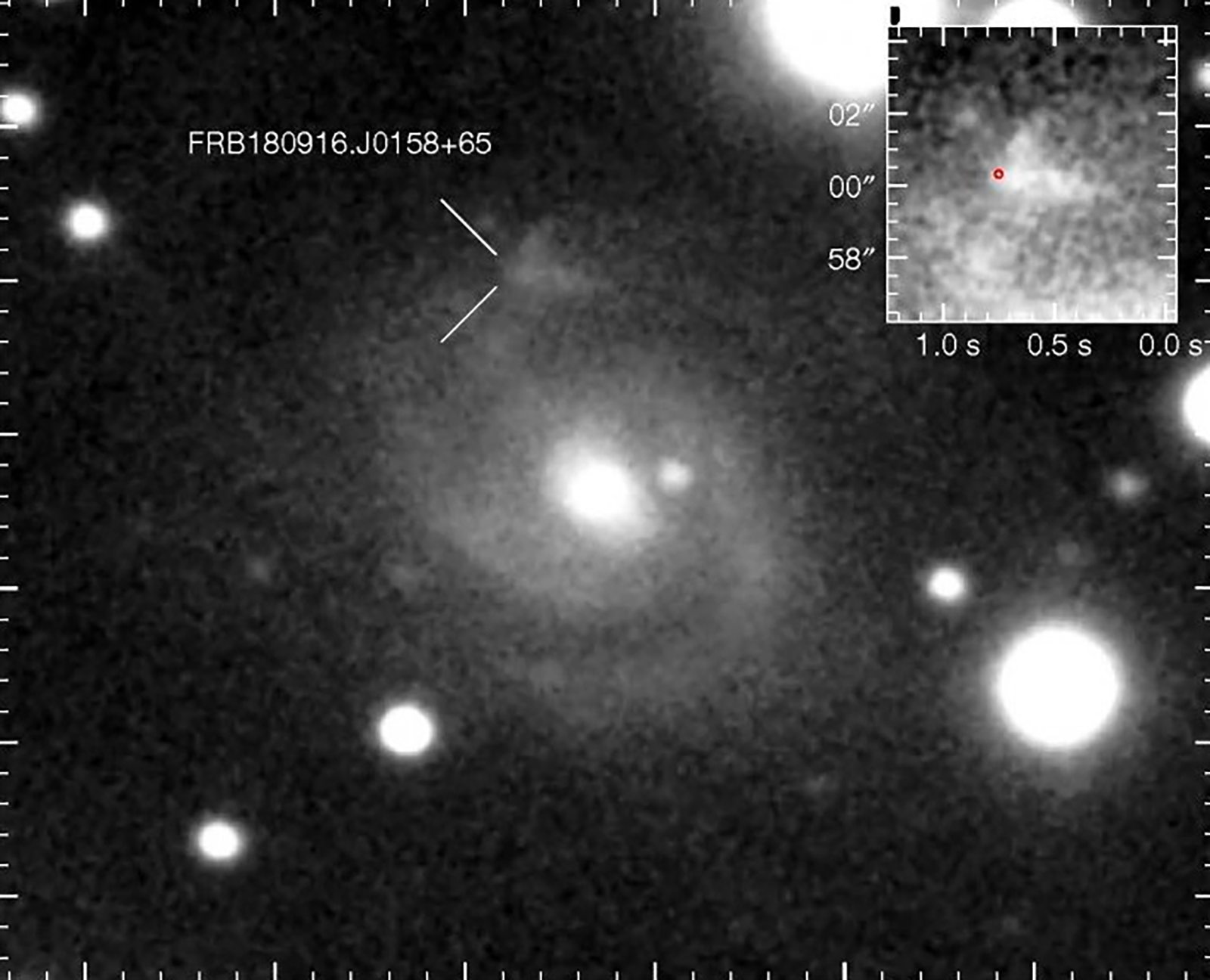 The spiral galaxy 500 million light years away from Earth, where the origin of the repeating fast radio burst is located. (Photo: B. Marcote et al., Arxiv)

In 2007, astrophysicist Duncan Lorimer co-discovered the first known FRB, which had been picked up at the Parkes radio telescope observatory in New South Wales, Australia, and has since continued studying this phenomenon. With news of this novel discovery in Canada, Lorimer says he is very excited for what it means going forward.

“It’s a super exciting time to be both a member of the public just watching these discoveries being made but also being in the scientific community and being involved in them,” he says.

While the discovery of this regularly repeating FRB is incredible, Lorimer says it is really important that this discovery is confirmed by other telescopes to ensure it’s a sustainable phenomenon.

“If it is confirmed, then it’s telling us something very fundamental about at least some classes of FRBs,” he says, explaining that there are likely two classes of FRBs: some that repeat and some that don’t. He added that the periodicities of the bursts were something completely unexpected to him.

“If the periodicity is as regular as they are saying it is, then there aren’t that many things that can behave like that in the natural universe,” he says, agreeing with the scientists that the bursts are likely coming from spatial objects interacting with each other somehow.

No matter where they are coming from, the regular FRB cycle has deeply fascinated Lorimer. “These fast radio bursts are just incredibly exciting,” he says. “We still don’t know what they are or what causes them, but they have amazing potential for helping us study the large-scale structure of the universe.” 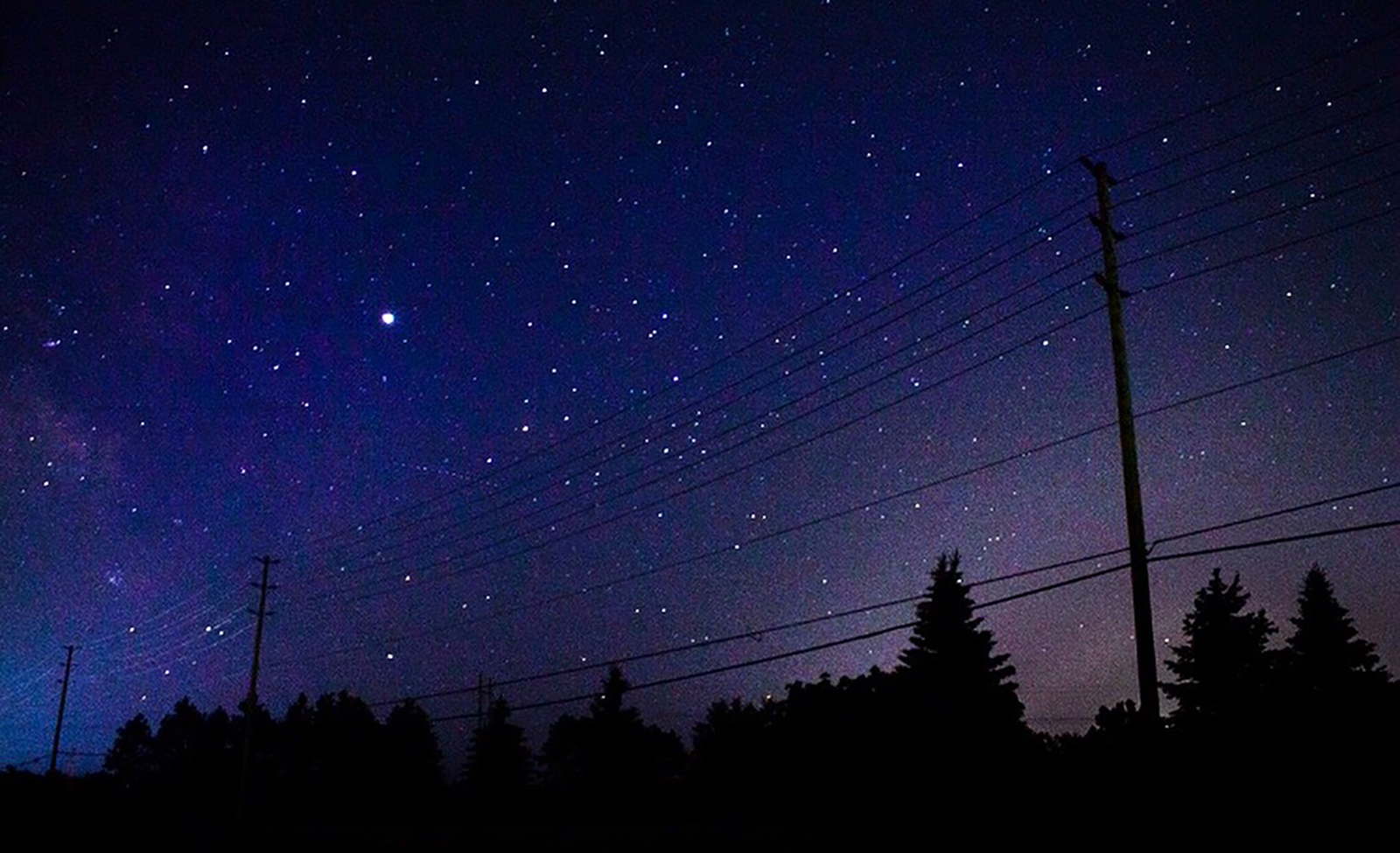 The night sky, as seen from Ottawa. (Photo: Alex Pope)