Highlights from day one of Canada’s Coolest School Trip 2019
By Tanya Kirnishni
June 5, 2019

Whimsical names like Balsam Poplar House and Fox Burrow decorate the wooden signs above the oTENTiks in Riding Mountain National Park, Manitoba. Wasagaming, the name of the historic town inside the park itself, means “clear or shining water” in Cree. The park is like something out of a storybook, and the sound of excited laughter and running footsteps fits seamlessly into its natural beauty.

The winning class for this year’s Canada’s Coolest School Trip had a very long journey to make from Teslin, Yukon, to Winnipeg, Man., the starting point for their all-expenses-paid tour of Parks Canada sites in Manitoba this week. Ms. Keenan’s grades 5, 6, and 7 students from Khàtìnas.àxh Community School won the contest in April in recognition of their hard work in preserving and sharing their local Tlingit language.

Upon arriving at Riding Mountain, the students quickly fill their water bottles from the tap at the campsite, which draws from Clear Lake, the largest lake in the park, before immediately following the park guides to their first activity of the day, a short hike through the marshes.

Ominnik Marsh Trail winds its way through clear blue waters, making sharp turns between reeds, stretching past a beaver dam, and ending in a lookout point. A highlight for the students is the fact that the entire trail is laid out on a floating boardwalk that gently bobs as you walk, giving you the sensation of actually being in the marsh itself without getting your feet wet. 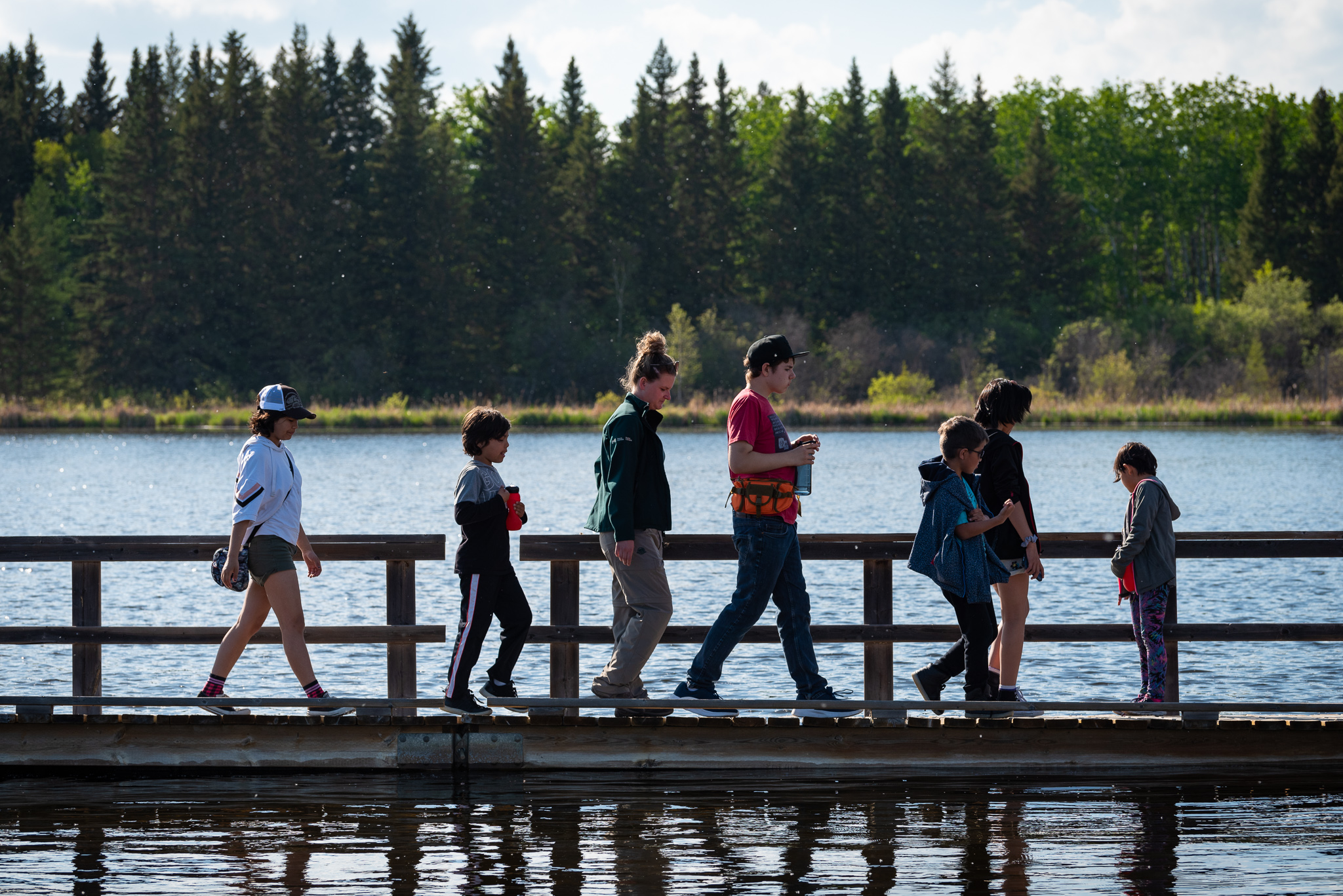 The marsh teems with wildlife—dragonflies buzzing overhead and blackbirds swaying on tall cattails—but the star of the hour is the beaver that the students spot at the end of their hike.

“It’s been a while since I saw a beaver,” says Seth Netro, watching the animal munch on a poplar branch, oblivious to the students crowding around for a closer look. “We have beavers where we live, but they’ll get scared if they hear a noise because they’re hunted sometimes.”

As the late afternoon sun paints the boardwalk with shadows and the wind blows poplar seeds like snow over the water, the park seems to be putting on a show. “I’m going to stop and take a photo of this path,” says Justice Aubichone, looking for the best angle to catch the light. “Photography is really cool isn’t it?”

There are several budding photographers in the group. Kayce Saligo takes in the landscape with an artist’s eye. And what makes a good photo? “I look for the sun, and for things in front of it,” says Saligo, going over his collection of photos from the trip so far as the group walks back towards Wasagaming. “I took that one just now,” he says, showing a photo of a low-hanging branch from a pine tree with the sun’s rays seeping through.

After the walk, the students and their chaperones, which include teachers Tina Moody-Curran and ​Glen Brooke, as well as the principal, Amber Dumouchel, gather for dinner. Sitting in a pine grove clearing, they enjoy food prepared from locally grown and sourced ingredients, before moving to the campfire, where they are welcomed to the park by local Elder Warren Bone.

Hot chocolate is handed out and Parks Canada interpreter Desmond Mentuck launches into the history of the area, talking about the local Indigenous Peoples and the fur trade. He then introduces the father-son duo of Vincent and Jared Shingoose, who entertain the group with guitar and fiddle music, featuring Métis jigs to Irish tunes. Some of the students even hop to their feet to dance a couple turns before the fire.

At the end of this long day of travel, hiking, dancing, and even a couple games of tag, the students finally head back to their oTENTik village, passing along Clear Lake’s sandy beach just as the sun sinks into the horizon. With loons calling out on the lake and owls hooting somewhere in the poplars, they tuck into their sleeping bags to get some rest before the next day of adventure.

Tune in tomorrow for more from Canada’s Coolest School Trip! 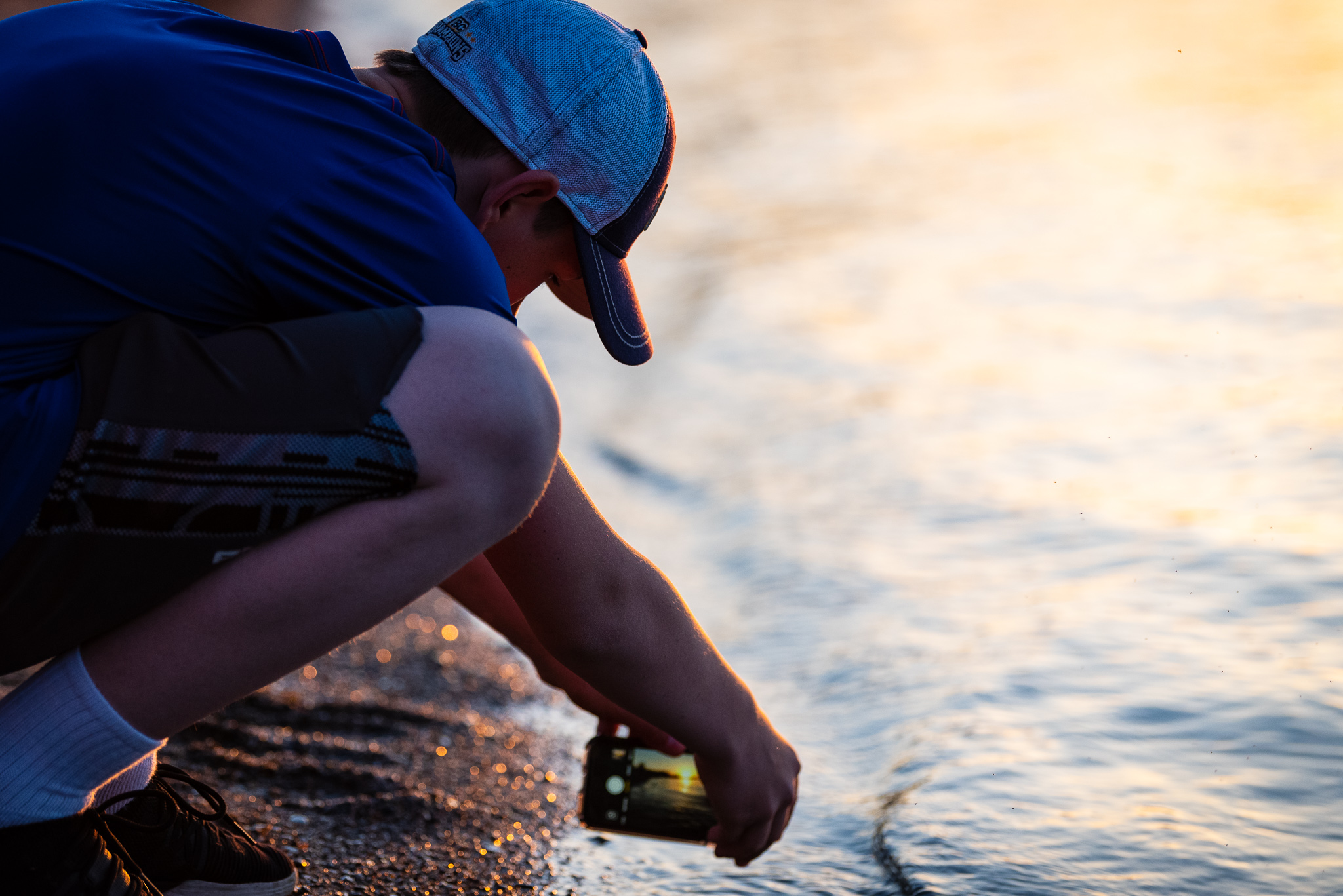 Kayce Saligo gets close to the water to capture the perfect shot of the sunset over Clear Lake. (Photo: Tanya Kirnishni/Canadian Geographic)