It isn’t clear who says it, but suddenly everyone rushes over to the right side of the bus, crowding in the seats to see the massive animal. There are in fact two bison, standing right by the side of the dirt road, happily munching on grass. It’s an auspicious start to the second day of Canada’s Coolest School Trip—almost as though the bison have a copy of the day’s itinerary and are following the schedule.

The winners of this year’s contest, Ms. Keenan’s grade 5, 6, and 7 students from Khàtìnas.àxh Community School in Teslin, Yukon, piled onto the bus first thing after breakfast, going deeper into Riding Mountain National Park. They drove along the still waters of Clear Lake, through the prairie grasslands, until they reached Lake Audy.

Getting off the bus, the students are greeted by the sight of pelicans on the water, drifting by with all the elegance of swans, and ground squirrels darting across a trail into the safety of the tall grass. The students follow the trail around a bend, where it suddenly opens to a flat landing overlooking the lake. Here, a hands-on lesson awaits them: how to raise a teepee.

“It’s about teamwork and being aware of your surroundings,” explains Parks Canada interpreter Desmond Mentuck to the students gathered around him. Spread out on the ground before them are 14 long wooden poles and a large canvas sheet. As Mentuck helps the students, working in pairs, to carefully lift and place the poles, he shares the symbolism inherent in the construction of the teepee for the Anishnaabe, such as the number of poles and their connection to the number of stars in the Big Dipper and Little Dipper.

“The reason the doorway faces east is so it faces the sun when it comes up,” says Mentuck. “It looks like a mother with her arms raised to the sun.” 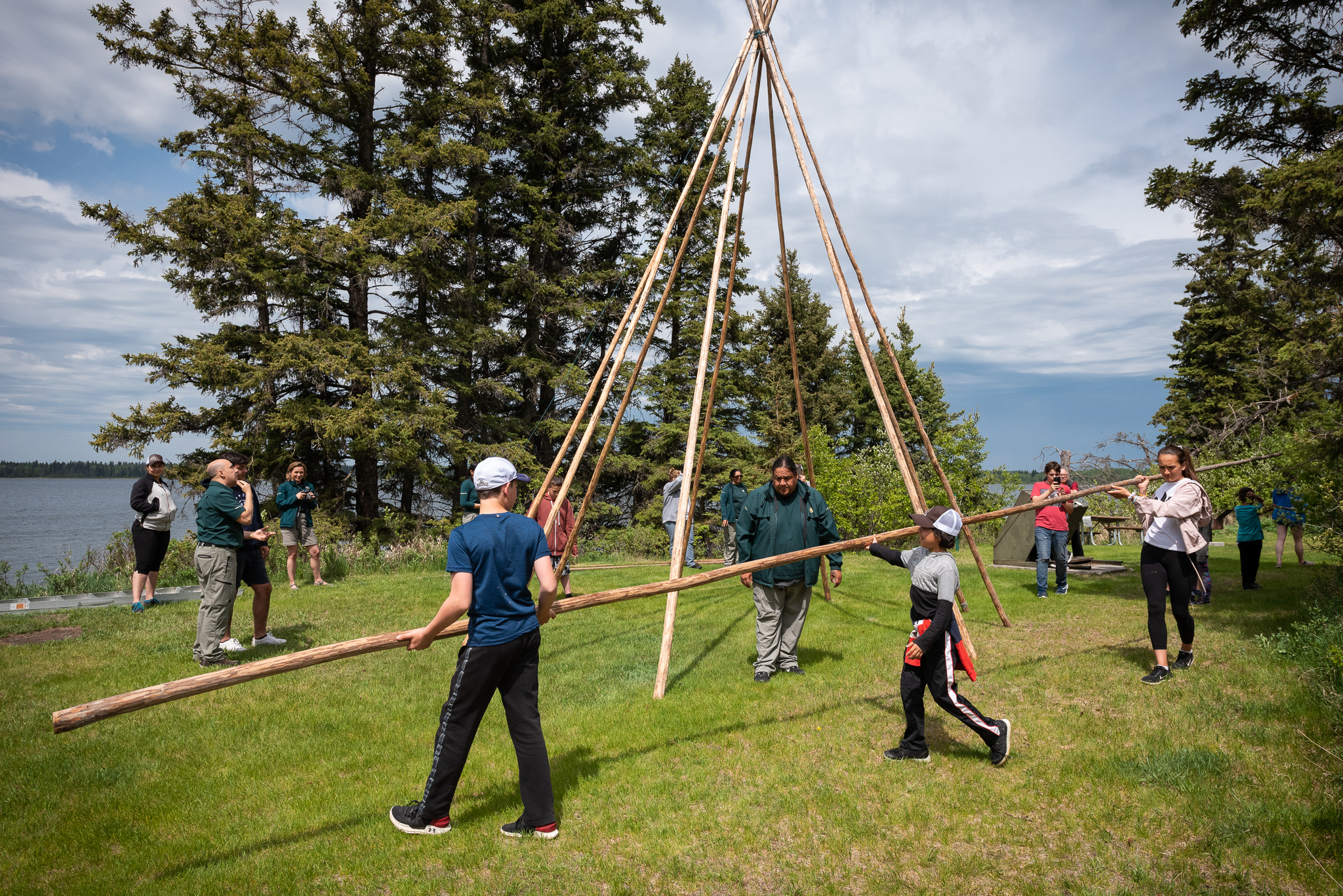 Once the poles are in place, all the students come together to help lift and set the canvas onto the frame, unfurling it so it can be tethered to the ground. The teepee is finished just in time, as a burst of summer rain and thunder rolls in over the lake, sending everyone ducking inside for cover. Lunch is brought in for the students to enjoy in the shelter of the teepee they helped assemble.

“We could overwinter in a teepee like this,” says Mentuck, gesturing around him at the comfortable, bright and airy space.

“But we would need to close the hole at the top right?” asks Seth Netro, one of the students.

“That’s right,” says Mentuck, explaining that one of the ways in which a teepee could be prepared for the winter is to dig a shallow ditch from the campfire and extend it outside the teepee, covering it with stones so that it sucks in air to feed the fire.

Researchers have found evidence that about 2,500 years ago, people camped on the shores of Lake Audy as they tracked and hunted bison herds across the vast North American grasslands.

After lunch, the students get back onto the bus for a tour of the park, as seen through an ecological and historical lens. They learn about the different ecozones found within the park, such as the deciduous forests full of trembling aspen and the delicate grasslands, where the bison roam. Several times throughout the tour, students glimpse black bears ambling through the grass before disappearing into the undergrowth of the forest. Riding Mountain National Park is thought to have one of the highest densities of black bears in Canada.

The students also learn about the history of the land, from the traditional territories of the Anishnaabe peoples, encompassed today by Treaty 2, to the creation of the park through the labour of relief camp workers in the Great Depression of the 1930s, as well as Mennonites who protested against the Second World War as conscientious objectors.

The day winds down at the park Visitor’s Centre, where the students explore beautiful diorama displays of the wild animals found within the park, dine at the Wigwam restaurant housed in a mid-1900s cabin, and stretch their legs around the picturesque town of Wasagaming.

Tune in tomorrow to find out where Canada’s Coolest School Trip heads off to next! 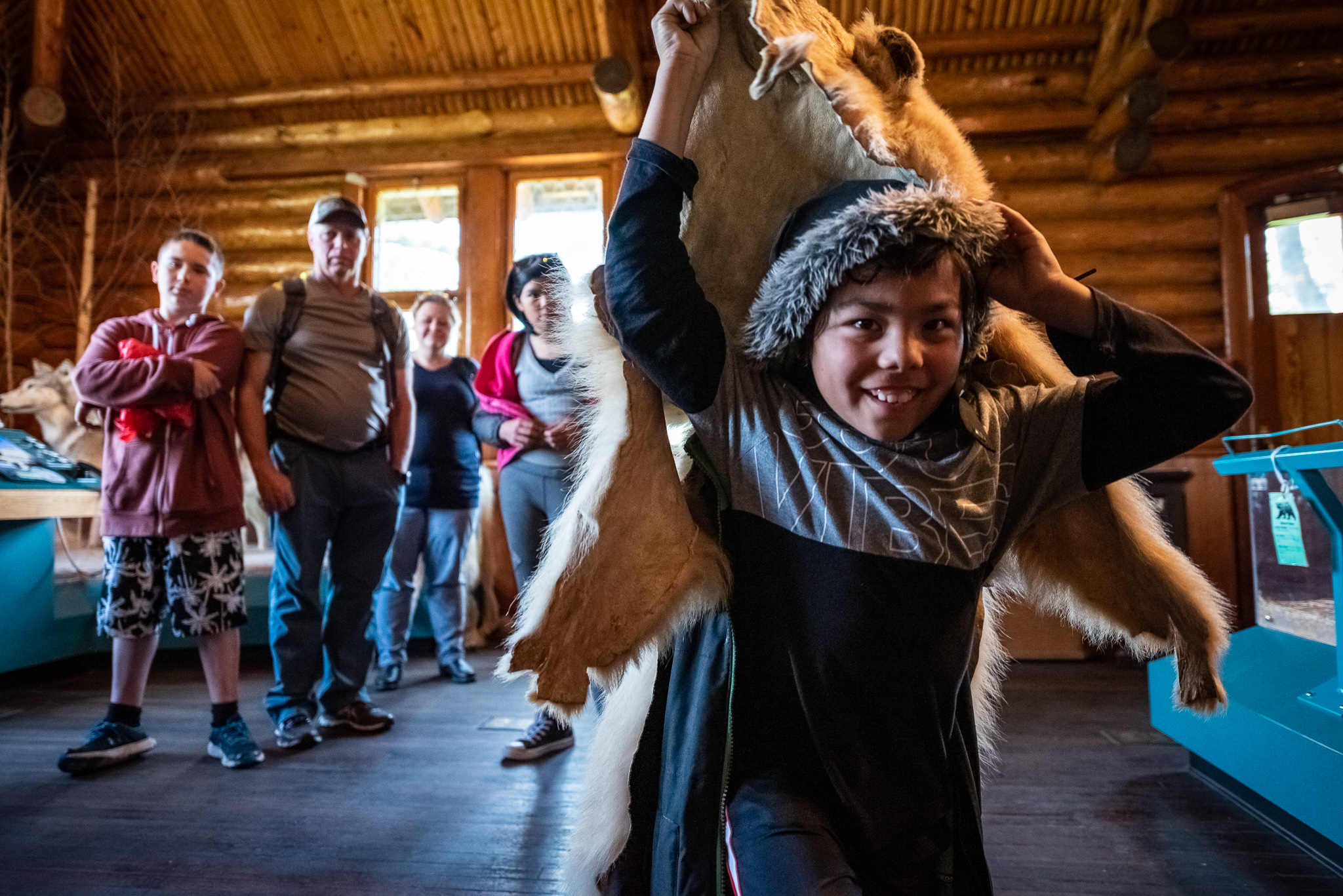 William Aubichon had some fun pretending to be a bear as he and his classmates explored the Visitor’s Centre at Riding Mountain National Park. (Photo: Tanya Kirnishni/Canadian Geographic)