Canlit icon and Royal Canadian Geographical Society Fellow Margaret Atwood has put her stamp on all sorts ideas over the past five decades — feminism, animal rights, even our very identity as Canadians all spring to mind. Now the literary icon has gotten a literal stamp.

And though a cameo of Offred would have been a fitting tribute to the author of the immensely popular The Handmaid’s Tale and its follow-up, Booker Prize-winning The Testaments, the traditional headshot won the day.

The stamp, which celebrates Atwood for her contributions to Canadian letters, was revealed at a ceremony at the Toronto Reference Library on November 25. It features a portrait by photographer Ruven Afanador, with the lines “A word after a word after a word is power” from her poem “Spelling.”

Atwood, who attended the launch event, was celebrated by filmmaker Sarah Polley, who adapted Atwood’s 1996 Kingston, Ont.-based novel Alias Grace into a TV miniseries. “It will be good, when I mail letters, to be reminded of the most curious person I have ever met,” said Polley in a speech at the launch event.

Also at the ceremony was activist Ceta Ramkhalawansingh, who tweeted out a congrats to Atwood the day before the stamp’s launch: “If you get a card from me this year, it may have this stamp on it. Brava to Margaret Atwood.”

Atwood's acceptance speech was typically amused and amusing. “It's a picture of me thinking,” she said with a chuckle. “And most of the time I'm not!” She noted that the unexpected honour had already caused “stamp envy” in her peer group, some of whom had wondered how she managed to score a stamp without being dead yet.

One of Canada’s most decorated writers, Atwood’s bibliography includes more than 50 books of poetry, fiction, criticism, essays and graphic novels.

It’s somehow appropriate that Atwood has been recognized during an ongoing world pandemic, which has been compounded by climate turmoil. Her recent novels have showcased dystopian societies characterized by environmental disaster and patriarchal subjugation. 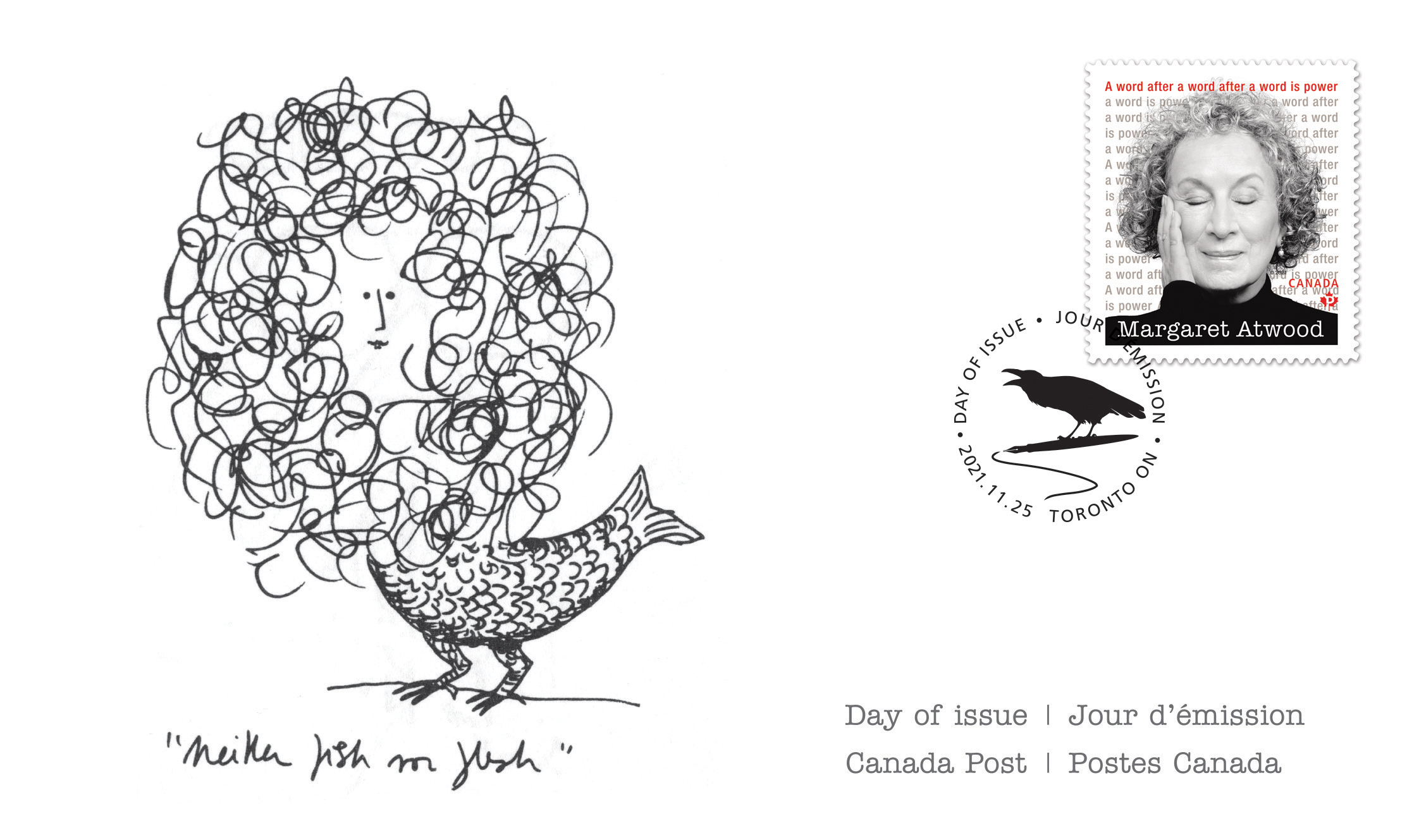 The Official First Day Cover showcases a sketch by the author entitled Neither fish nor flesh (1975). The cancel — a raven silhouette symbolizing Atwood’s interest in birds — is postmarked in Toronto, which was chosen due to the author’s deep connections to the city’s publishing community. (Image: Canada Post)

The front of the Official First Day Cover showcases a sketch by the author entitled Neither fish nor flesh (1975). The cancel — a raven silhouette symbolizing Atwood’s interest in birds — is postmarked in Toronto, which was chosen due to the author’s deep connections to the city’s publishing community.