Behind the covers: My journey as a published wildlife photographer | Canadian Geographic

Behind the covers: My journey as a published wildlife photographer

A noted Canadian wildlife photographer who often contributes to Canadian Geographic shares the story of his big break
By John E. Marriott
December 7, 2018

When I was 26, I said goodbye to a nine-to-five job with Parks Canada in Banff National Park and began to slowly transition into a career in photography. That fall, a phone call came out of the blue from the photo editor of Canadian Geographic magazine. I had been busy taking photographs for two and a half years, but I still hadn’t considered trying to sell my images, let alone to Canada’s most well-known nature magazine. I was a deer-in-the-headlights rookie navigating uncharted waters.

To my amazement, after a brief back-and-forth, the editor informed me they had picked one of my grizzly bear shots to grace an entire half page in the January/February 1997 issue. My first sale! And to Canadian Geographic!

I was high on that sale for months and suddenly felt sure my plan to become a professional wildlife photographer would come to fruition — ignoring the fact that I didn’t actually have a plan. I was so certain that riches were going to follow hot on the heels of the Canadian Geographic sale that I sat back and waited for the calls and the money to roll in.

Roll in, they did not. That first year, my photography sales garnered a grand total of $717.

Despite my financial struggles, the year wasn’t without its highlights. Shortly after the initial magazine sale, I landed my first cover, again with Canadian Geographic (their Fall/Winter 1997 Christmas catalogue), with a photo that has since become one of my best-selling images—a bull elk resting on the edge of a forest in Banff during a light snowfall. 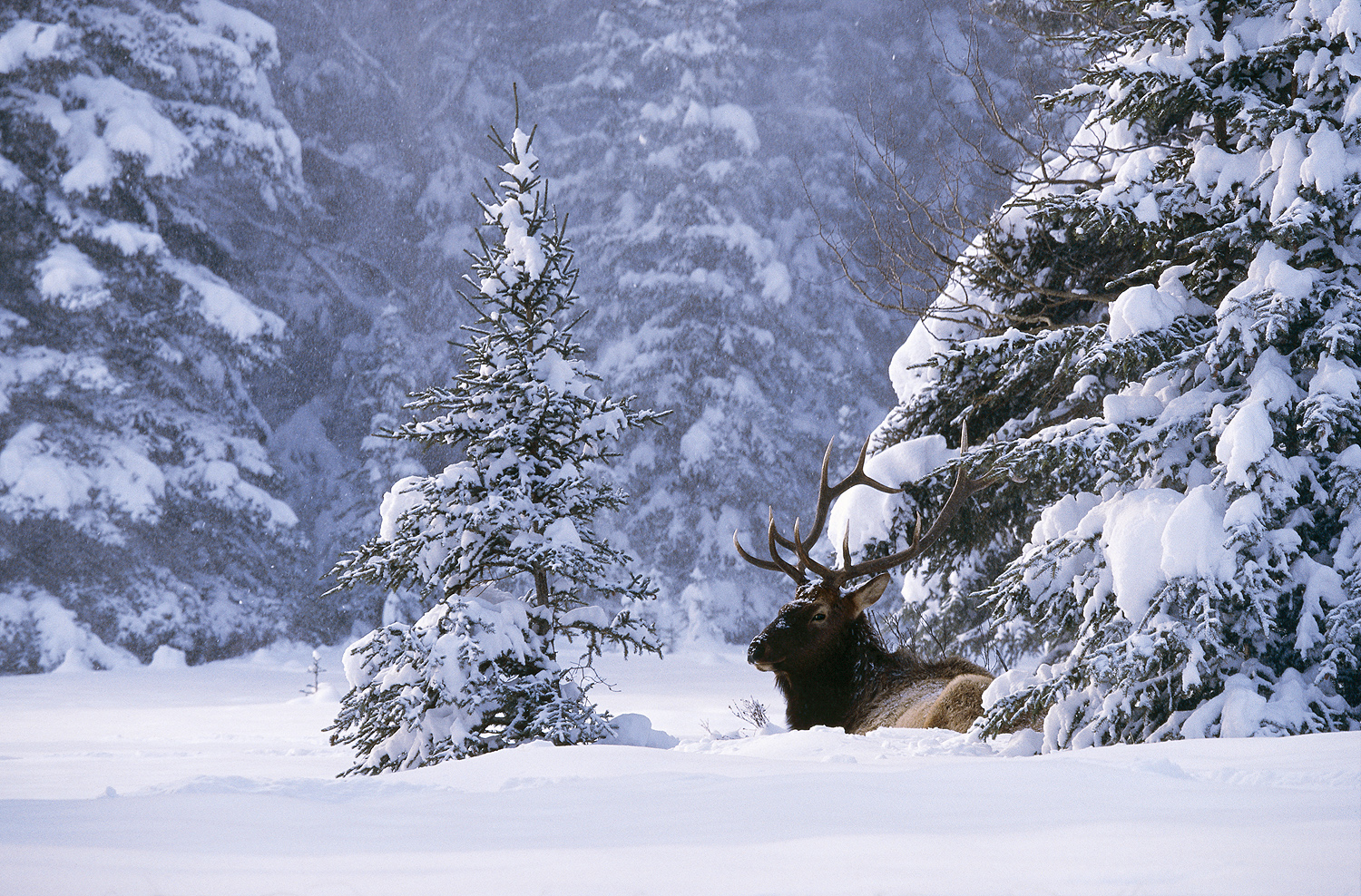 By the year 2000, I had made a full transition to wildlife photography and was a full-time pro. Over the years, I had a number of images appear in the pages of Canadian Geographic, but that next cover image continued to elude me.

Then, in 2009, it finally happened. Another Canadian Geographic cover.

Two years earlier, I had started photographing a wild black wolf named Delinda, the alpha female of the Bow Valley, Alta. wolf family that ranged from Bow Lake to Banff in Banff National Park. Delinda had adapted well to the busy Bow Valley and successfully raised three litters, somehow managing to live with people without getting into trouble with them. She walked that fine line between being a wild wolf and dealing with all the tourists, towns and transportation corridors that were part and parcel of life in the park.

In August 2008, Delinda was struck and killed on the Trans-Canada Highway, inside the national park. Her death set off a cavalcade of media coverage that ranged from Maclean’s magazine to the BBC and CNN. The significance of Delinda’s death was not lost on the general public or the media. Soon afterwards, her family disintegrated, killed on roads and railways, eventually completely disappearing from the country’s most prized national park.

A year later, in December 2009, one of my favourite photos of Delinda was selected for the cover of Canadian Geographic’s first annual wildlife issue. Delinda’s image and story struck a chord with readers, and that issue quickly became the one of the magazine’s best-selling issues of all time (as well as one of its most awarded covers). 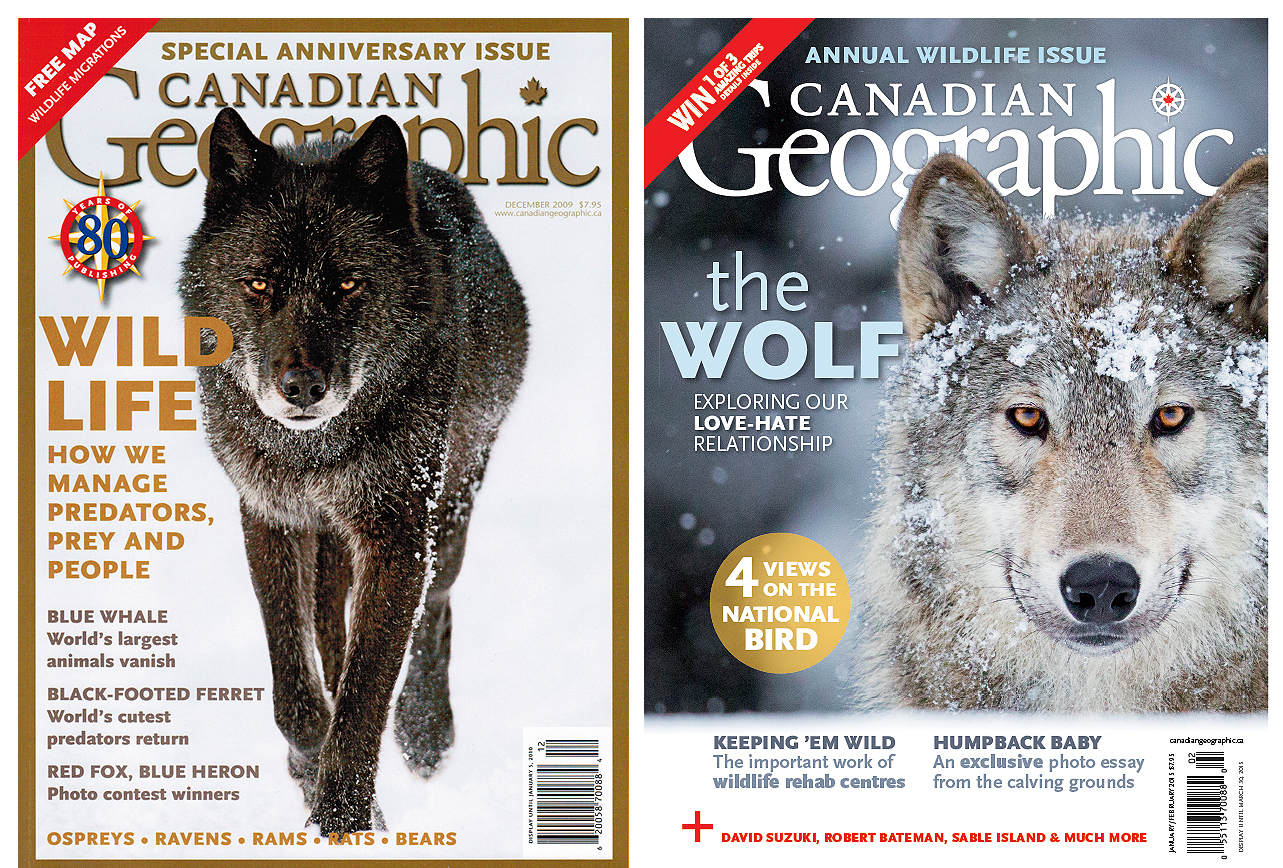 My relationship with Canadian Geographic continues to this day. In the years since that decorated Delinda cover, I’ve had four more covers, including three more wolf covers. And while the job of being a professional wildlife photographer has changed greatly over the decades, I’m thrilled that Canadian Geographic continues to be a key cog in my career more than 20 years since my first sale.

John E. Marriott’s latest book Tall Tales, Long Lenses: My Adventures in Photography, chronicles many of his favourite wildlife tales and showcases images that have appeared in Canadian Geographic over the decades. For more information, visit www.wildernessprints.com.