Art in the park | Canadian Geographic

Art in the park

Six artists are scattered across the sparse tundra grass of Ivvavik National Park, at the northern tip of the Yukon. One sits cross-legged at a rocky syncline rising from the jeweltoned Firth River. Another stares through binoculars as an eagle wheels overhead. A third lies belly down beside a cluster of tiny Arctic forget-me-nots. Everything in the Yukon — from stunted and bear-clawed spruce to wisps of wolf fur and caribou prints only half remembered by the mud — begs to be recorded. Little surprise, then, that it takes four hours to hike just under two kilometres. There’s no need to hurry. In Ivvavik, where the summer sun never sets, an endless supply of perfect light means it’s always time to sketch.

Residencies such as Ivvavik’s Artists in the Park program have been steadily cropping up in Canada’s national parks since the first one in 2003. Each winter, committees at participating parks review the applications of dozens of artists and invite a few to visit the following year. Ivvavik takes six artists on a 10-day camping trip to an outpost in the middle of the park. Newfoundland’s Gros Morne National Park offers living quarters, complete with studio space, to one artist at a time for up to six weeks. The Banff Centre, at the base of Tunnel Mountain in Alberta’s Banff National Park, provides facilities where residents can explore sculpture, ceramics, printmaking, video art and more. Some artists start and finish pieces in the host park; others simply collect information and inspiration in thumbnail sketches and reference photos.

Artist residency programs aim to keep national parks fresh at a time when they are facing a drop in visitor numbers. Baby boomers, formerly their core constituents, are unable to access the outdoors with the frequency they did a decade ago. Parks need new methods of connecting with more diverse audiences. Creative programming is one of the ways they do this.

It works because the job of an artist goes beyond just making art — artists also act as translators. When they paint, photograph or otherwise reflect their own experiences, artists open windows onto those experiences and invite viewers along. Northern Ontario is tied to the Group of Seven as surely as the poems of Robert Service cast the spell of the Yukon from the printed page. Whether framed by canvas, camera or composition, art introduces viewers to places they might not otherwise know and teaches them to appreciate wild spaces in entirely new ways.

There is perhaps no better place in Canada to examine transformation than among the quartzite caps, granite ridges and gneiss rocks of Newfoundland’s Gros Morne National Park. These ancient mountains play perfectly into Jane Isakson’s interest in the way time and change present themselves in the natural environment.

In 2008, when Isakson travelled to Gros Morne from her home in Whitehorse, she expected to spend most of her time by the water’s edge. Instead, the dramatic and inaccessible cliffs that crust the park’s seascape forced her inland, where she became mesmerized by the exposed rock formations. Aesthetically and geologically, they formed a timeline of the Earth that testified to large-scale shifts and land adaptations.

This sense of time both inspired and impeded Isakson’s painting process. The shakeup in surroundings made her question whether she could approach a foreign landscape in the same way she treated the Yukon hills of home. After a two-week struggle with her first painting, she decided she was thinking too much — she only had to represent her initial response to the land. This realization brought about subtle changes in her style. The pieces inspired by Gros Morne are more angular and have a simpler structure than her paintings of the North.

The shock of the familiar

When the 19-seat Twin Otter bounced down the tundra runway and disappeared between the British Mountains, Paul Fortin was overwhelmed by the crushing silence of Ivvavik National Park. Although the quiet was something he missed during later residencies at The Banff Centre, Ivvavik presented its own set of challenges.

Fortin is a painter who divides his time between Peterborough, Ont., and Inuvik, N.W.T. On that first trip to Ivvavik, he was forced by the sheer vastness of the park to view his residency as a research mission. Instead of producing on-site, he explored Ivvavik on foot, snapping thousands of reference photographs along the way.

Back home and staring at pictures of the hills and hummocks he’d recently hiked, Fortin felt that the digital renderings had become static and as familiar as highway billboards. A sense of removal rather than recognition made him wonder: When we look, how much do we really see? How does Canadian perception of the North differ from what the North is truly like? 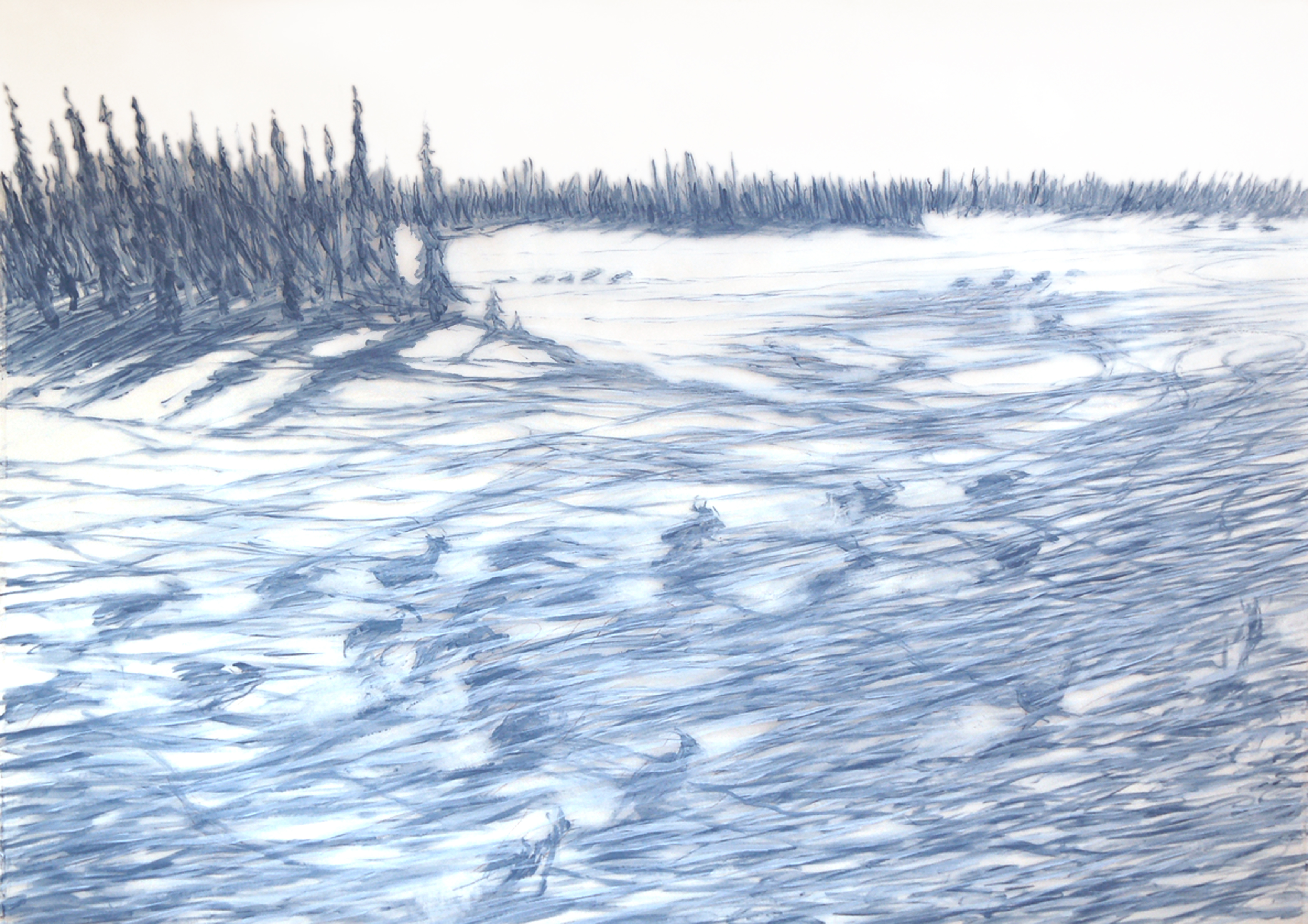 During the 1980s, Katharine Harvey spent her summers in Dawson City, Y.T., slinging drinks and waiting tables to finance a fine arts degree from Queen’s University, in Kingston, Ont.

In 2006, when she was invited back to the Yukon to Ivvavik National Park, Harvey, now living in Toronto, planned to focus on the landscape. Instead, she found herself drawn to the people, particularly Inuvialuit park interpreter Gerry Kisoun. Trailing him through Ivvavik’s rolling, unglaciated hills was an education in lifestyle as well as landscape. Kisoun’s stories — of the Arctic Games, northern government and growing up on the iceberg-dotted shores of the Beaufort Sea — illustrated a strong connection to a dynamic land.

Harvey’s work in Ivvavik developed in response to the isolated grandeur of her surroundings. Trading paint, her medium of choice, for the instant gratification of pencil, she based a series of Mylar drawings on the swift, singular moments she saw in the whorls and eddies of the Firth River rapids.

Marie-Jeanne Musiol is one of the few photographers who cares little about imagery; her interest lies in energy. In 1994, the Gatineau, Que., artist turned from traditional to electromagnetic photography when the limitations of standard cameras frustrated her. Her technique of “energy botany” uses specialized scientific equipment to record the images of leaves that have been subjected to electromagnetic discharge.

In 2003, Musiol was invited to participate in a residency at Gros Morne National Park. While eager to capture the palpable radiance she felt at the park, she had two limitations: her equipment was too bulky to bring with her, and Gros Morne’s status as a national park prevented her from taking leaves home.

As such, residency became a research trip. Working with park botanist Michael Burzynski, Musiol took copious notes on the plants of the park’s lowland, coastal and mountain forests. When she returned to Quebec, she sought out the species of Gros Morne at the Montréal Botanical Garden. The resulting body of work — a collection of images of leaves rendered in thin, silvery lines that seem to quiver with intensity — was shot there.

A painter and outdoor guide in Whitehorse, Joyce Majiski, founder of Artists in the Park, spent 22 years leading tourists through Ivvavik before being given the opportunity to play the tourist herself. The inaugural 2003 residency was the first time she watched the wind-whipped turquoise waters of the Firth River without wondering how she might paddle them.

Much of Majiski’s work focuses on the 100,000- strong Porcupine caribou herd that passes through the park each year en route to the Alaska coast. Twice in her life, Majiski has been boxed in by thousands of the animals as they snort, shake and stamp their way through the park’s peaks and valleys, leaving behind nothing but ghost impressions: the scar of hoofprints on the land or a distinctive smell in the air.

Her paintings convey the surreal sensation of being isolated, inundated and deserted in a matter of minutes.