Into the Arctic: Film trilogy launches July 17 on Youtube

Fifteen years ago, Cory Trépanier set off on the first of five expeditions to the Canadian Arctic. His mission? To explore and record the sublime beauty of the remote wilderness of the Far North. The filmmaker and painter would travel more than 60,000 kilometres between 2006 and 2018, using the landscapes he encountered as inspiration for more than 100 oil paintings and three documentary films.
Into the Arctic: Painting Canada’s Changing North preserves a changing land in a limited-edition coffee-table book that includes Trépanier’s behind-the-scenes stories about each painting (a selection included here), as well as thoughts from fellow Arctic enthusiasts and experts who evoke the power and magic of the polar region through their words. Contributors include guide Billy Arnaquq of Nunavut Experience Outfitting Services, acclaimed naturalist and painter Robert Bateman, celebrated explorer and cultural anthropologist Wade Davis and Royal Canadian Geographical Society CEO John Geiger.
Trépanier has said that through conveying “the sense of wonder and awe I have when I’m out there,” he hopes his work will inspire efforts to preserve and protect the fragile Arctic ecosystem and the way of life of the North’s inhabitants.
Into the Arctic can be pre-ordered now through the Trepanier Online store at https://www.trepaniershop.com/collections/books and other retailers. Release date is October 12, 2021. 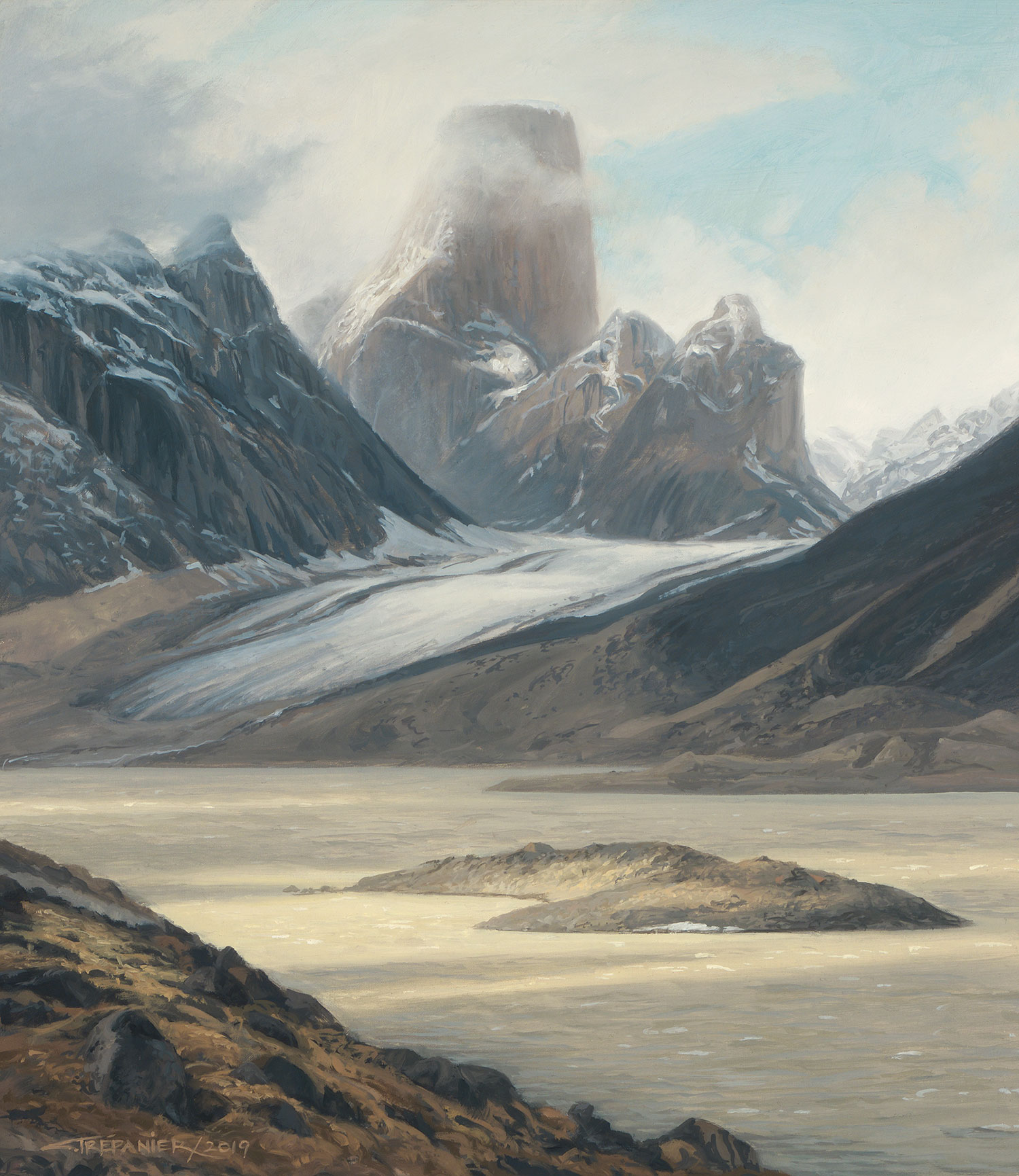 In Norse mythology, Asgard is the dwelling place of the gods. In the Arctic, it’s a spectacular mountain in Auyuittuq National Park on Baffin Island, Nunavut. I first heard about the mountain, known to the Inuit as Sivanitirutinguak, while preparing for my 2007 expedition. I never made it there, as my attention was instead consumed with Thor Peak [also in Auyuittuq National Park]. Eleven years later, a 50-kilometre hike brought me and my daughter Sydney there at last. Camping on the edge of Glacier Lake, we watched Asgard rise into the clouds.

I had been searching for a striking view that could lead to a large companion painting for my Thor canvas. Packing up camp under a dusting of fresh snow, I struggled with the idea of leaving this place. Then the sky opened and I disappeared over the rise in search once more. A composition formed unlike any I could have imagined. The light caught the fresh snow on Asgard, streaking intermittently across the surface of Glacier Lake, tied together by the icy tongue of Turner Glacier spilling down the valley.

Within half an hour, it was over. The mysterious mood that piqued my euphoria gave way to a different kind of beauty as clouds were replaced by clear skies and a clarity seldom found elsewhere. I sat and took it all in, trying to absorb the experience — to bottle it up inside in hopes it would spill onto a large Asgard canvas back at the studio, so I could share with others the wonder I felt. I cannot help but wonder what will remain of this rapidly receding Turner Glacier if I have the good fortune to return here 30 years from now.

At 180 kilometres from the nearest Arctic community of Clyde River and over 3,000 kilometres from my home in Caledon, Ont., Kangiqtualuk Uqquqti (Sam Ford Fiord) defines “remote.” The variety and beauty of countless jagged peaks overwhelmed me as I wielded my brush to document this magical place. I hope this painting conveys the grandeur of this wilderness.

The 1845 Franklin Expedition gravesite on Beechey Island is one of the most vivid examples of the history of Arctic exploration by Europeans. I was there with Inuit outfitter Randy Nungaq and his son Sheldon, from Resolute. They watched for polar bears as I approached the graves, headstones bathed in the warm glow of the setting sun. Despite my fascination with history, I found myself caught up in the present, amid the ethereal beauty of this sombre place. 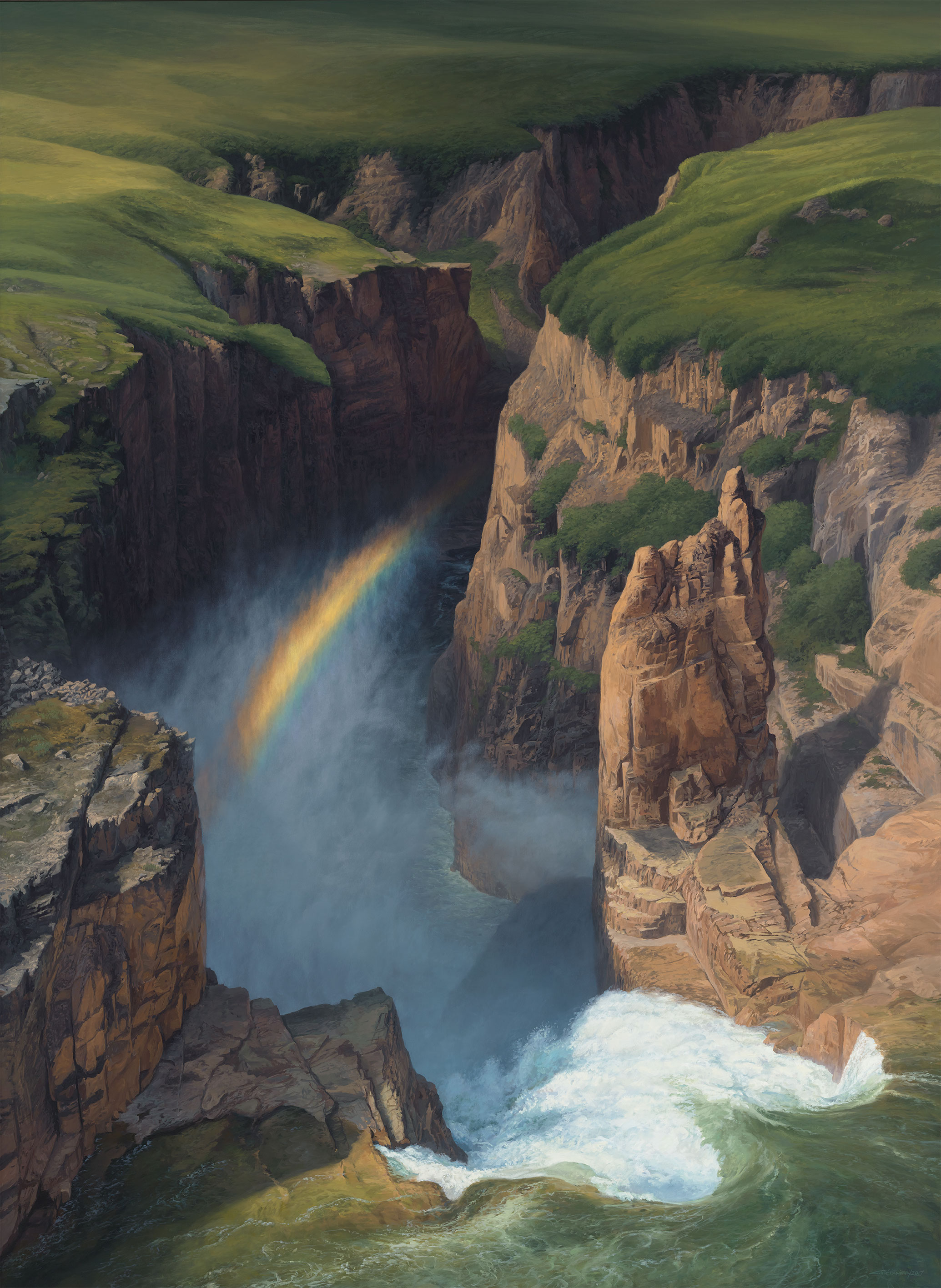 Painting in the Arctic has offered me a wealth of new experiences: encounters with wildlife, learning about Inuit culture, connecting with history, studying hardy and ephemeral Arctic flora. This is Kattimannap Qurlua (formerly called Wilberforce Falls), Nunavut.

Some of the only art I had seen from this hidden gem is an etching from explorer John Franklin’s first expedition, which travelled up the Hood River in 1821. His crew included artists George Back and Robert Hood, from whose sketches an etching was derived. Franklin was so impressed with the falls during his early explorations that he named them after William Wilberforce, a British politician whose life’s work led eventually to the abolition of the slave trade in most of the British Empire.
This natural wonder captivated me completely as I tied my easel to a nearby bush at the cliff’s edge. I revelled in the roar of the water, was mesmerized by the colourful, shifting prism in the mist and was awed by the steep, red-walled cliffs. Here, I felt the exhilaration of painting in a truly wild place, one that I hope will remain so forever.

Ephemeral Beauty, 2020. Tanquary Fiord, Quttinirpaaq National Park, Ellesmere Island, Nunavut. Oil on linen, 20" × 60". (Painting: Cory Trépanier)
Gracing the land briefly each summer, the flora carpeting each side of the creek was a sight to behold. In this harsh land so far north, it is always a wonder to witness such delicate beauty surviving against all odds, including a short growing season that plunges into winter darkness and cold for months each year. I also loved the contrast against the raw mountains in the background and the rare opportunity to use such vivid magenta hues in an Arctic painting. This painting was created in Quttinirpaaq National Park on Ellesmere Island, Nunavut.

Cory Trépanier's award-winning Into the Arctic film trilogy, in partnership with Parks Canada, presents everyone — everywhere — the opportunity to embark on an inspiring journey to six of Canada’s most remote Arctic National Parks: Ivvavik, Sirmilik, Auyuittuq, Aulavik, Tuktut Nogait and Quttinirpaaq. The tripogy will be available July 17 on YouTube. Watch the trailer below.