In January 2020, many of us lit fireworks, opened champagne bottles and celebrated as if it was going to be a better year than the one before. Little did we know that two months later, the world would change in seemingly unimaginable ways. As the planet was gripped by the COVID-19 pandemic and many discovered their hidden baking talents, I got to work on making the most of my photographic talents in this unique situation.

Together with Lazy Bear Expeditions in Churchill, Man., I started putting plans in place for what would be an expedition very few people have experienced: camping along a remote part of coastal Hudson Bay with dozens of polar bears. The trip itself was a roller coaster — much like 2020 itself! — that tested my limits, but also a trip that in turn changed my life. Here are the highlights. 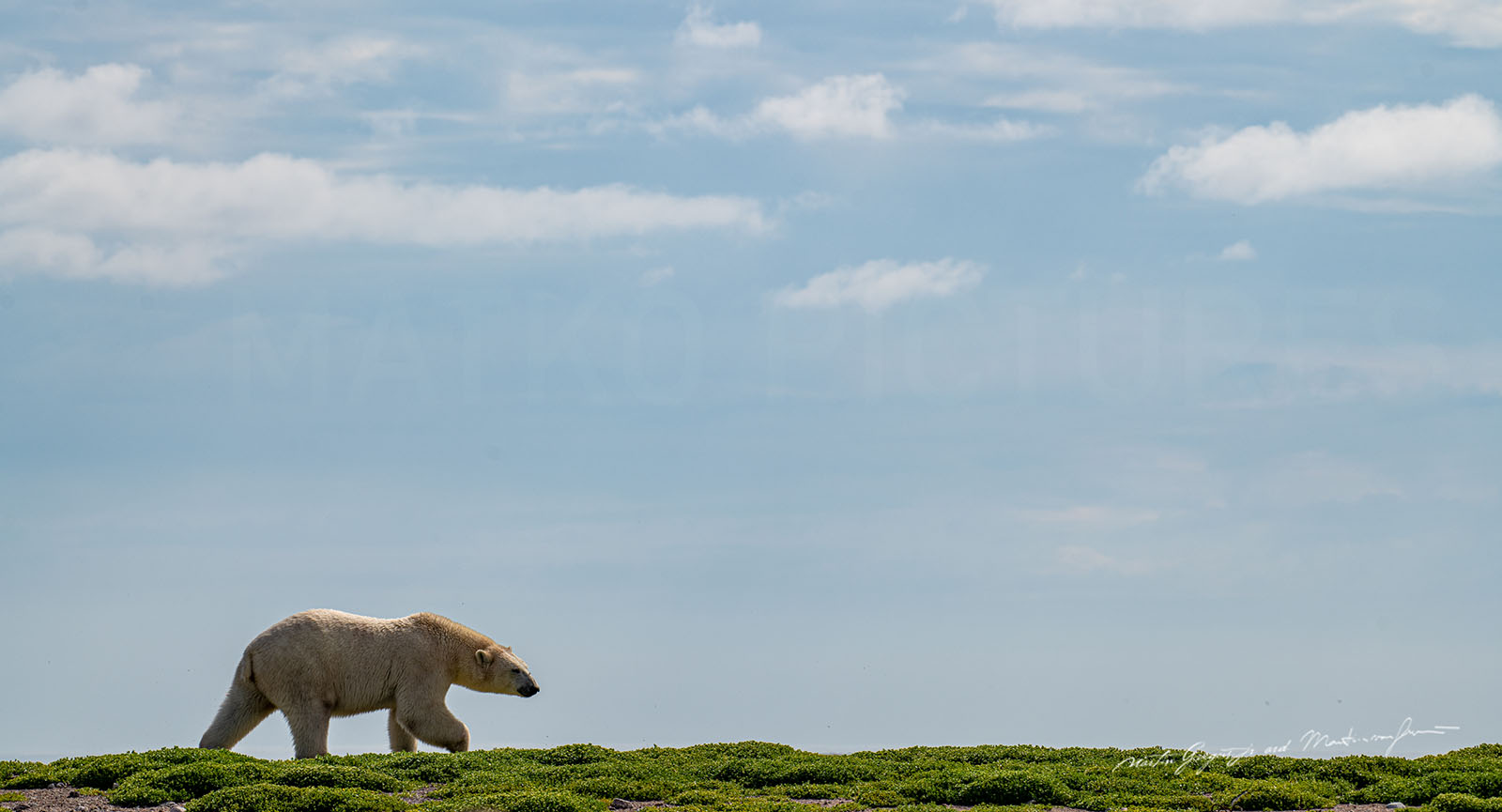 Given the global pandemic, I was afraid and anxious to travel. I mean who would be crazy enough to sit in a plane full of travelling strangers? Me, it turns out. After travelling from Vancouver to Churchill, Man., with five suitcases full of gear and three backpacks, each as heavy as a small child, I finally made it to the polar bear capital of the world. Knowing I'd have lots of time to photograph polar bears during the trip, I wasted little to quickly photograph some of the thousands of beluga whales that gather near Churchill before we set off further north.

2020 seemed to be a weird year for literally everything, including an unusually late arrival of summer in the southern Hudson Bay area. At first I loved it, seeing large ice sheets — many hosting bearded seals and some with polar bears — the size of towns passing by the boat day in and day out. But since polar bears would much rather be out on the ice, its presence meant the bears weren't congretating along the coast. So it was a few days before I was regularly seeing the bears. 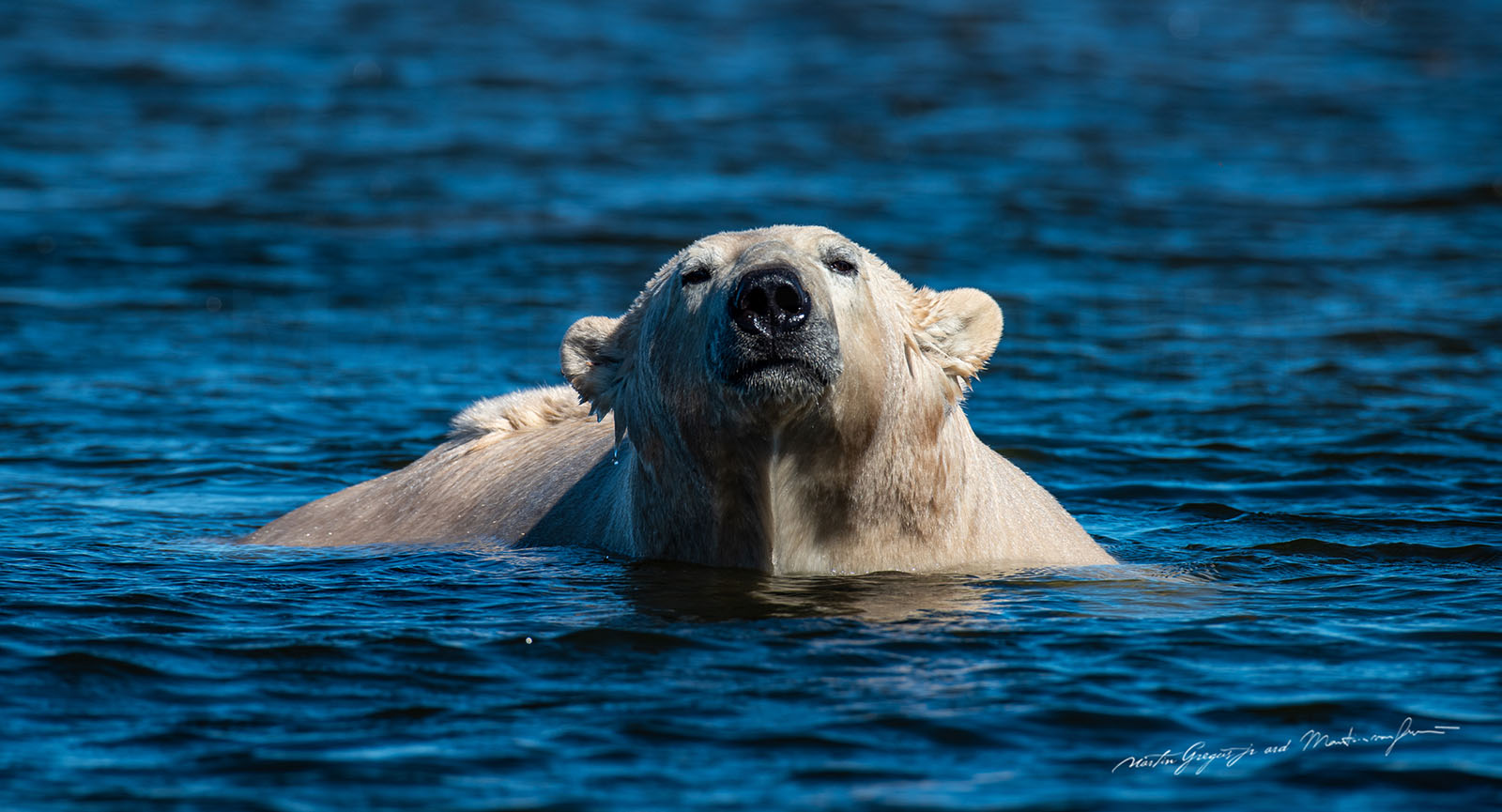 Turn of the tide

Once the ice pack started circulating in the bay, more and more bears started showing up on the coast. The ice essentially like a conveyor belt slowly but steadily delivering bears from the bay. Polar bears on the remaining ice were drifting with the currents and winds right toward Churchill. Of course, at first I was unaware of the ice breaking up 500 kilometres from shore, so I happened to be busy documenting a few locals hunting beluga whales when the first bears started showing up to shore.

With thousands of kilometres of coastline, there are only a handful of places along Hudson Bay where truly unique natural events happen. It took some local knowledge and lots of luck, but I was finally getting the scenes of bears I was after. One day mid-trip I encountered on a cold windy morning, the kind of day where you just want to lie in bed and wait for it to be over. I waited out the storm, before boarding my guide's boat to set out on what we thought was a regular scouting trip. It took two hours to clear the fog bank before the western shore of the Hudson Bay opened up before us. Sitting on the boat cabin's roof, I started scouting for bears and it wasn’t long before I located two polar bears hunting for beluga whales along the shore near a large rock. I soon realized it wasn’t a rock, but in fact a grizzly bear also hunting belugas, a behaviour that to my knowledge had never been documented. Certainly photographing polar bears and grizzly bears together in the wild isn't common! 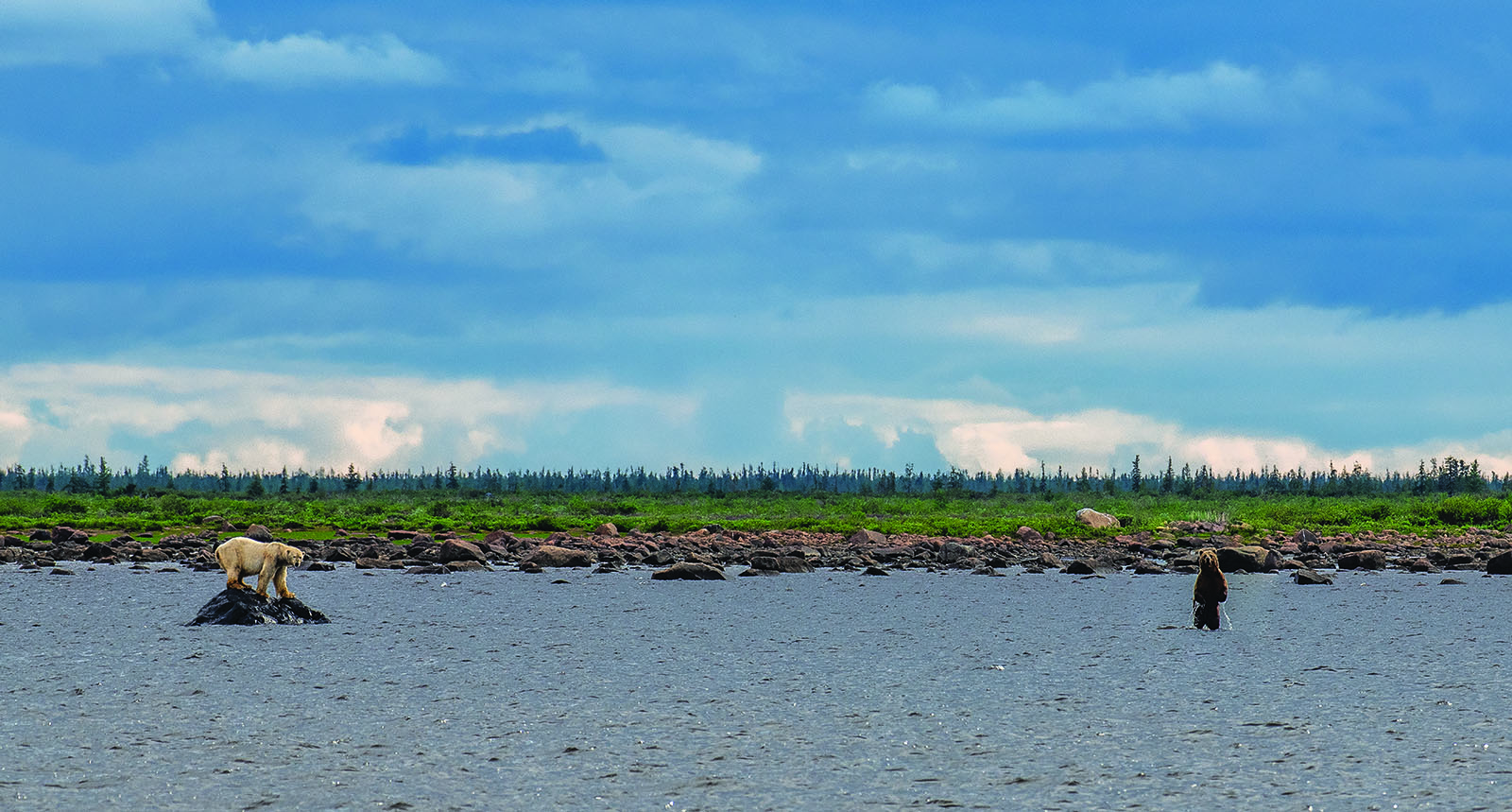 Leaving my crazy grizzly encounter behind, I headed up the shore to a small patch of coastline that would serve as my base crazy for the next two weeks. Beaching the guide's small boat, we setup camp on a cold, foggy afternoon and went to bed. During the next 14 days we documented 27 different polar bears, spending countless hours with many of these world's top predators. 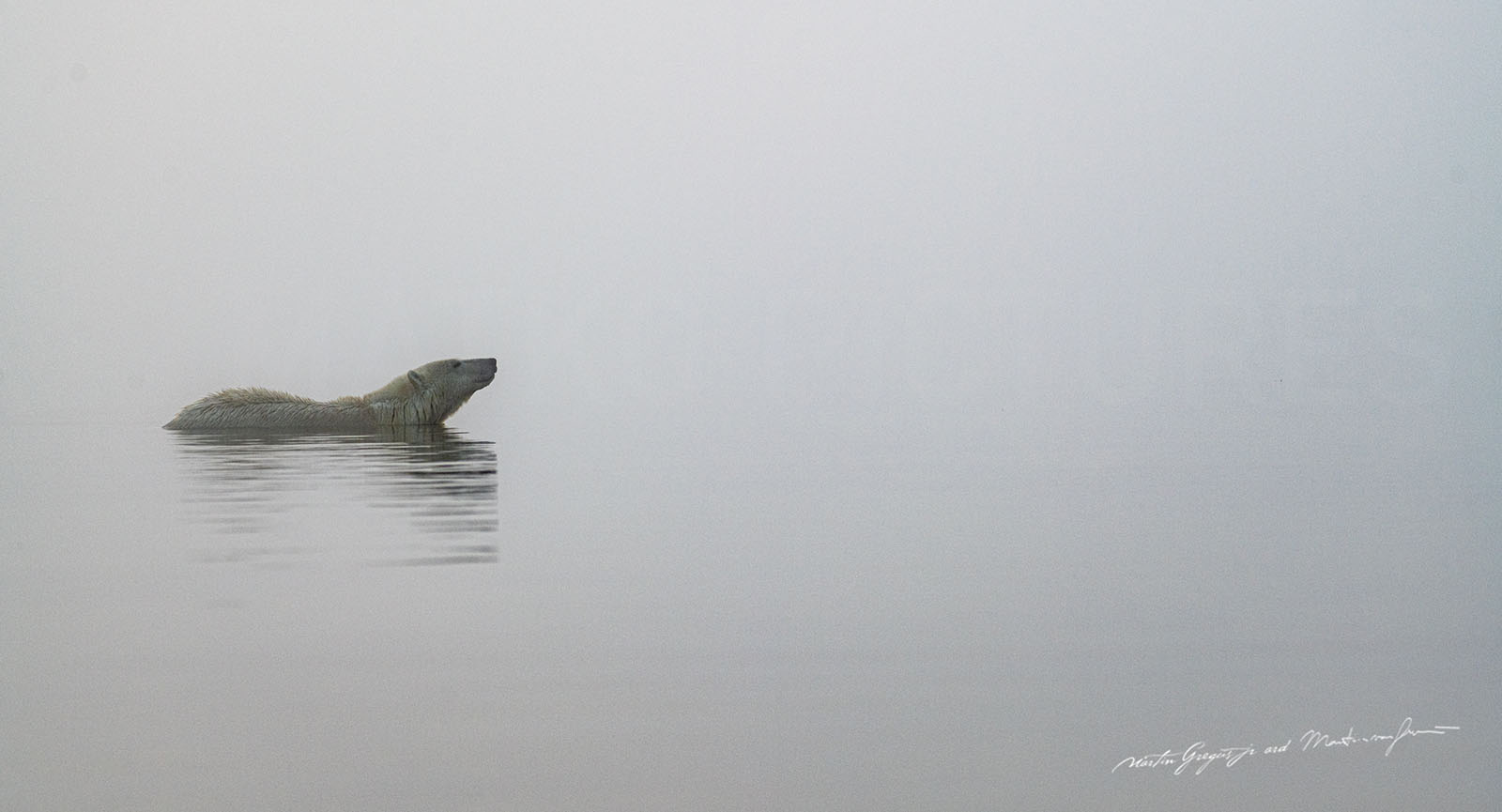 As I spent more and more time with the bears, I began to decern different personalities of each. It was like going to a country bar where you wouldn’t mess with the old beat-up guy with tattoos, but found it pretty easy to strike up a friendship with the mom and kids or a flamboyant teenager. The biggest female bear I saw became a top attraction, appearing as though she was doing yoga a few times a day. Another female and her two-year old, three-legged cub, meanwhile, became known as troublemakers, as they would often trip our motion sensors and keep us awake at night. Indeed, one night a bear's head poked into our tent. Thankfully an airhorn and the shock of a man in his boxers scared it off. Another female and her three cubs, got so accustom to our presence that by the end of the trip, mom let the kids swim right next to our boat as she napped more than a dozen feet away. 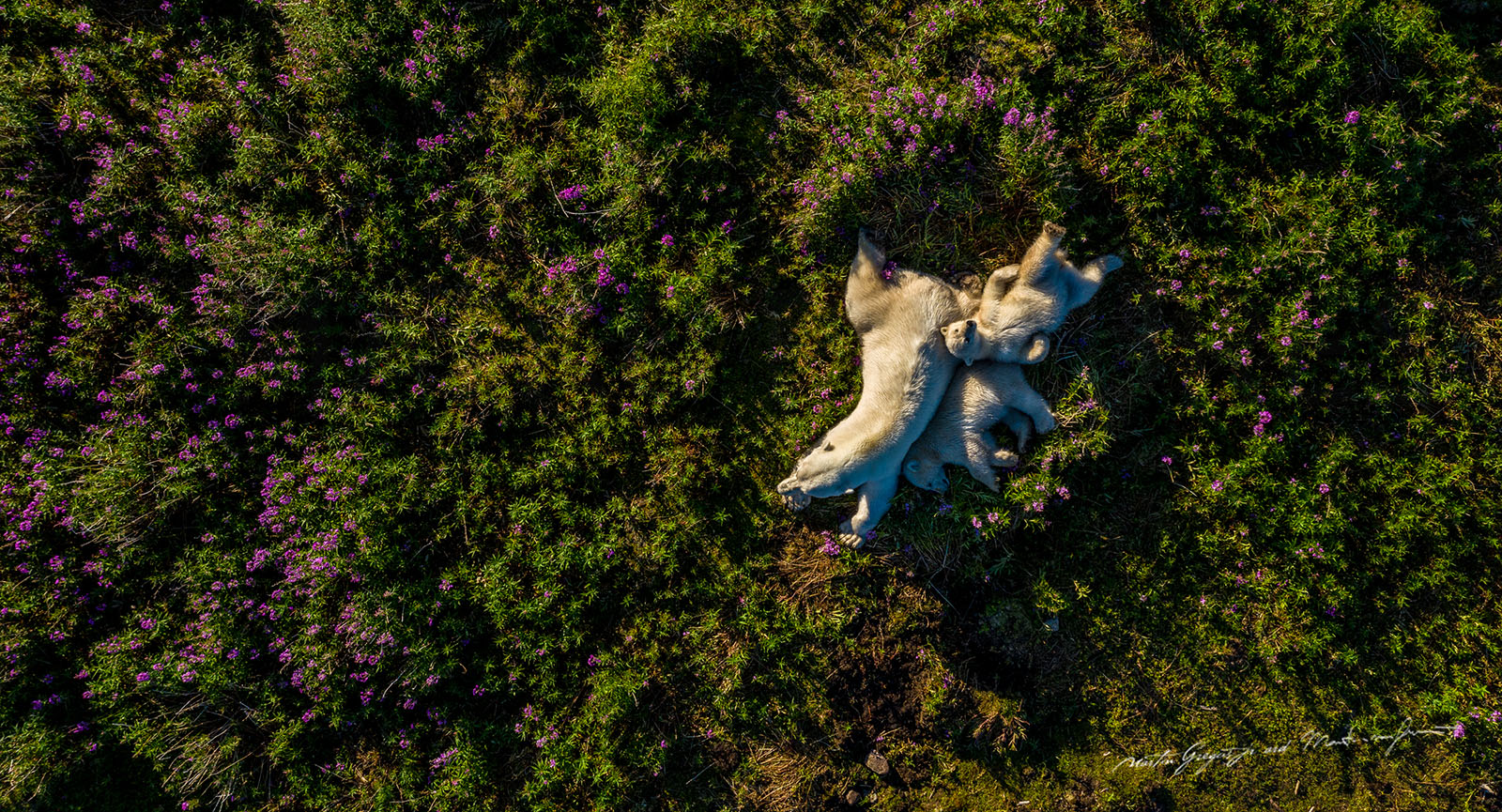 Saying this trip was an adventure is an understatement. How many people can say they camped out with polar bears for two weeks in the middle of nowhere? It’s an interesting feeling. I assume it’s similar to what Indigenous Peoples and explorers such as Amundsen, Nansen, Franklin and dozens of others felt. It's a sensation that you really get to feel only when you’re truly alone.

In order for great stories such as this to happen, you need an amazing team. With the help and backing of Lazy Bear Expeditions, myself and my assistant Thomas Gasior, along with our bear guard Henio Ruitenbeek, captured some amazing and often unique moments (some we believe that may never have been filmed before) from the ground and from the air with drones.