The amazing sea wolves of the Great Bear Rainforest

First Nations and scientists work side by side to better understand — and protect — coastal wolves living in the Great Bear Rainforest
By Ziya Tong
August 6, 2021

"The wolves eat the brains" says William Housty. If you’re walking along the creek beds of the Great Bear Rainforest and see decapitated salmon scattered about, it’s a tell-tale sign that sea wolves have been in the area. “They just take a bite take out of the head, and everything else is left fully intact.” This unusual feeding strategy has evolved among the coastal wolves that live in and around Bella Bella, B.C.
Housty was born and raised here. His grandmother is head of the Wolf Clan of Heiltsuk Nation, and he chairs the Heiltsuk Integrated Resource Management Department Board. The wolves, he says, are shrewder than the local bears, who eat the fish whole and as a result are often riddled with tapeworm. Eating the head alone, might also be a way to avoid “salmon poisoning”, a bacterial toxicity from eating raw fish — concentrated in the kidneys and muscles — that can be fatal to dogs and other canids. “Wolves are very, very intelligent animals,” continues Housty, “We respect them, and they respect us.” I listen rapt as he shares stories of living alongside these beautiful howlers in his home territory, but I’m also bit embarrassed — embarrassed as I, too, grew up in British Columbia, but never realized we had “sea wolves” living on the coast.
Until recently, scientists didn’t know much about sea wolves, either. Paul Paquet is a leading wolf expert and senior scientist at the Raincoast Conservation Foundation, a non-profit conservation science organization that, since 1990, has focussed on the power of research to protect the lands, waters and wildlife of coastal B.C. He says the first inkling that these wolves were unique was “discovered” by a zoologist named Ian McTaggart-Cowan in the 1930s. It was only in 1998, however, that research on these particular wolves began in earnest. But Paquet is clear to point out that the existence of these animals was certainly not news to the coastal First Nations, whose knowledge of the wolves dates back to their earliest origin stories. After all, how do you discover something you’ve always known? 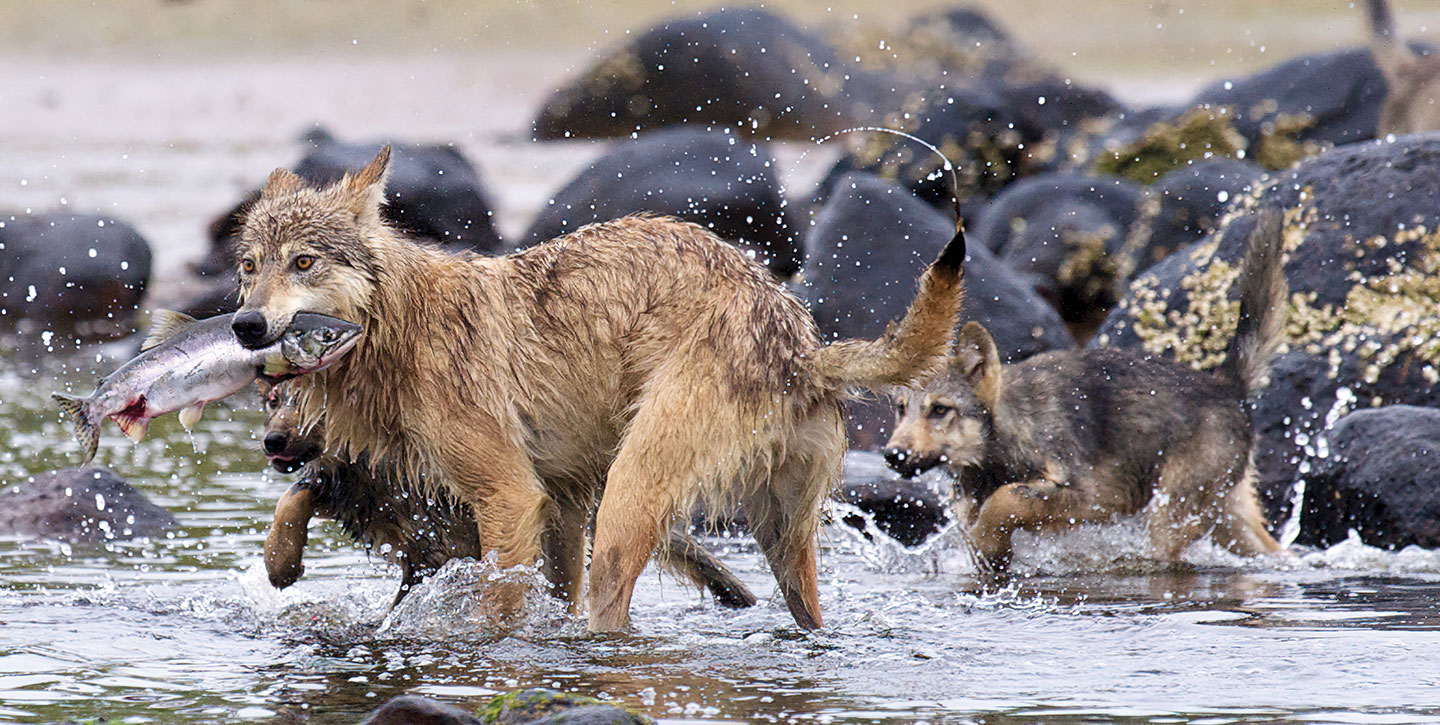 The wolves eat only the brain of the salmon, which allows them to avoid tapeworm and other parasites found in the raw flesh. (Photo: Klaus Pommerenke) 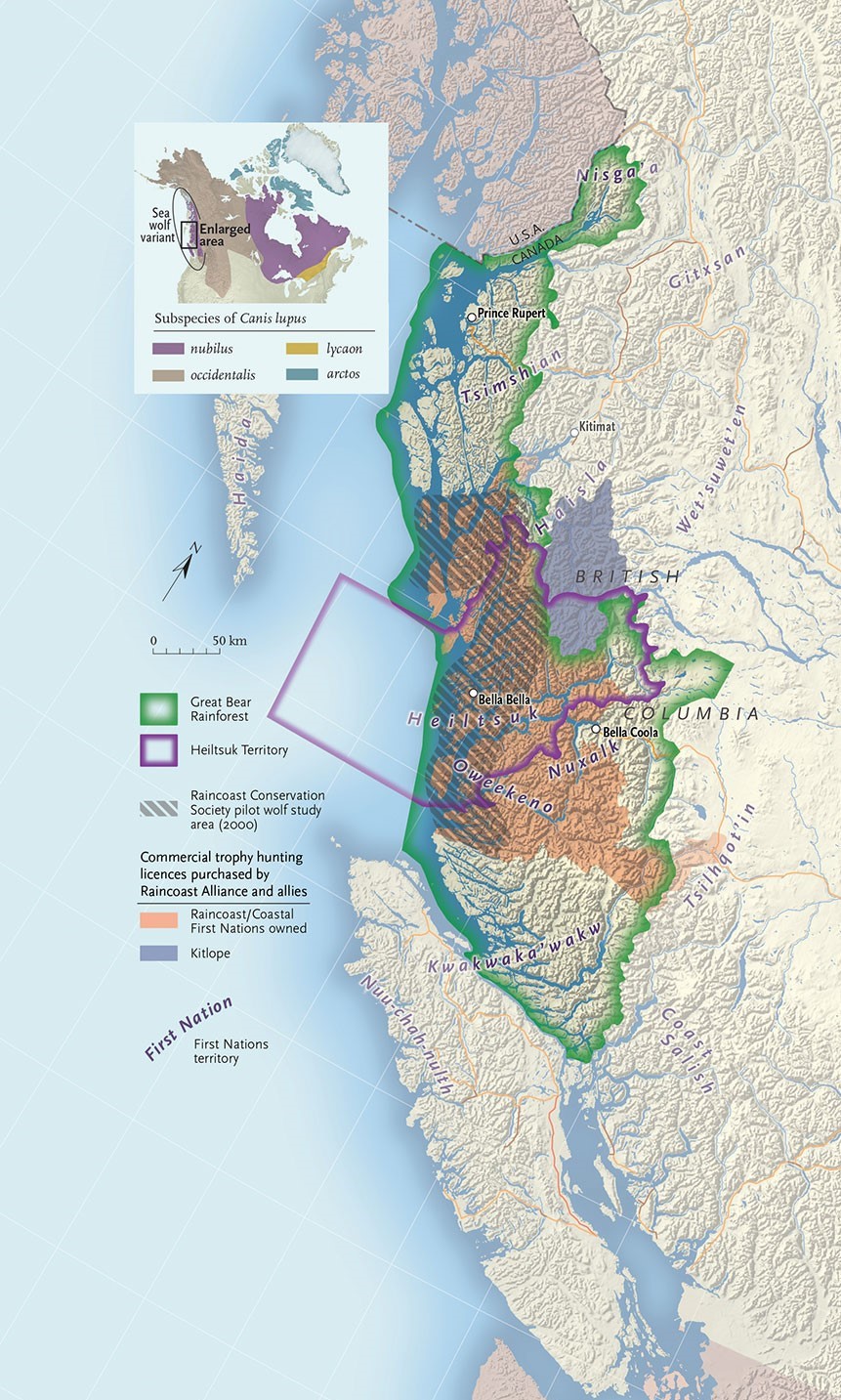 Map: Chris Brackley/Can Geo; Map data: wolf data derived from Raincoast Alliance  maps and reports; Heiltsuk Territory derived from Heiltsuk Integrated Resource Management Department map; Wolf range data 2021: The IUCN Red List of Threatened Species. Version 2. iucnredlist.org. Downloaded Oct. 4, 2015.
This is why today, Paquet, and other scientists who work in the Heiltsuk territory, take an integrative approach to studying the wolves; one that pairs traditional ecological knowledge (TEK) with modern science. This Sci-TEK strategy has its foundation in a consilience model, or the bringing together of different ways of knowing and evidence from multiple sources, to develop a more holistic understanding of the wolves. And what it has revealed about coastal wolves and their habitat is fascinating.
Firstly, sea wolves — or marine wolves as they’re also known — are fast, powerful swimmers. Housty remembers an encounter he and his father once had while boating: “We looked ahead of us and we could see something in the water. We couldn’t tell what it was, but it was moving. As we got closer, it was actually two wolves swimming across the channel.” One reason they’re tricky to spot, is because the wolves move stealthily in the water, their backs and bodies submerged and with only their eyes, ears and snouts peeking above the surface.
The wolves aren’t just dog paddling, either; they’re distance swimmers. There are packs living on the big island off the coast, which is 13 kilometres from Bella Bella, and there is no other way to get there — except to swim. We also know that the wolves aren’t sedentary. Many of them migrate through the archipelago, swimming from island to island throughout the year. At times, they’re tracking the salmon, but other times they show up even when there’s no salmon to be found. That’s because sea wolves have a diverse diet. A recent study found that it can be up to 90 percent marine-based: lone wolves take down seals and otters, ¬while packs have been spotted feasting on the occasional whale carcass. The carnivores also, surprisingly, eat shellfish. Using their paws, they dig in the sand for clams, and use their powerful jaws to crack open the shells of mussels. As for the remaining terrestrial diet? Like their larger mainland counterparts, the timber wolf, they also hunt moose and black-tailed deer. 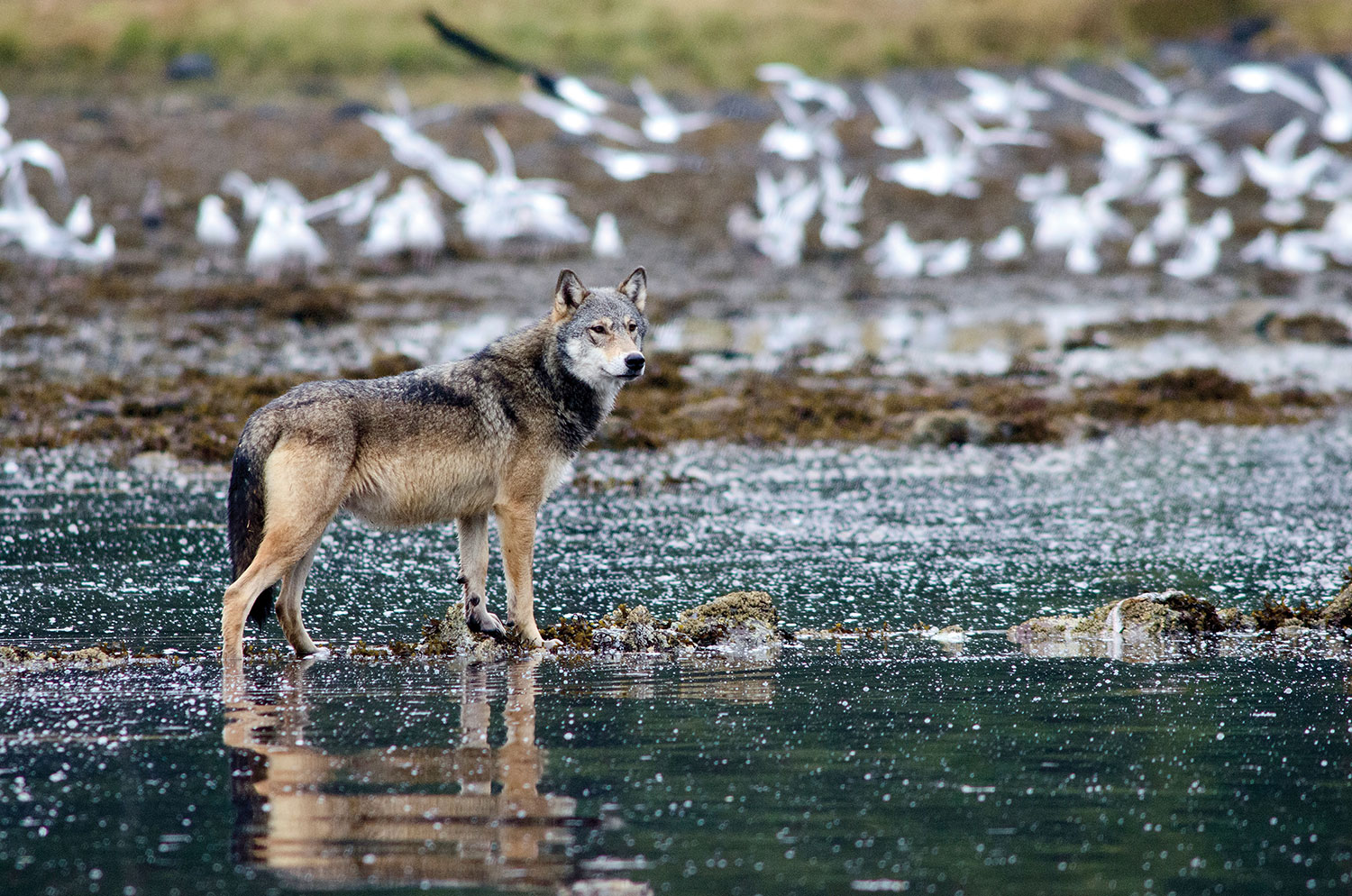 A white muzzle is an indication of age and maturity. (Photo: Kyle Artelle)

It was Chester "Lone Wolf" Starr, a Heiltsuk Elder and mentor to many of the Raincoast scientists, who pointed out key differences between the mainland and marine wolves — inspiring the hypothesis that the latter may be genetically distinct. Subsequent testing has revealed that they are, indeed, a distinct ecotype, even though geographically the two are close neighbours. Today, we know that marine wolves have an extensive range, from southern Alaska all the way down to the northern Washington islands.

And while a typical pack size is five or six individuals, what’s harder to pin down is a precisepopulation number. That’s because working with Indigenous knowledge keepers means the scientists must respect the animals. The wolves are family. And capturing and tagging family is not allowed.

To get more data, scientists have had to look to a non-invasive technique. Luckily, nature is the original mother of invention, and the wolves conveniently leave behind a very rich source of data every day: faeces. Dr. Heather Bryan, a former student of Dr. Paquet’s and now a professor in ecosystem science at the University of Northern British Columbia in Prince George, remembers one of her first tasks as a wolf researcher: “The first thing you have to do is put [the scat] in the oven and cook them for a few hours.” The heat kills off parasites and harmful bacteria so the team can work with sterile samples. She recalls sitting in class, while her classmates sniffed around as “this warm aroma started filling the room — this smell of cooking scats took over the whole biology building.” So it’s fair to say, perhaps, that when it comes to wolf research, “non-invasive” is a relative term.

Today, more than a decade and 7,000 scat samples later, scientists have a much clearer picture of the wolves’ ecology and physiology. The scat has revealed information about their genetics, their hormone levels, and the types of parasites and bacteria they harbour. Hair and bone fragments found in the droppings also offer details on their prey. And while the scientists may not have the help of GPS collars, the scat samples do offer a different form of location mapping, offering data on the animals’ range and habitat. And critically, of course, there’s the value of the DNA obtained from the faeces. Information gleaned through DNA analysis aligns with Elder Chester Starr’s initial observation that marine wolves are genetically distinct. 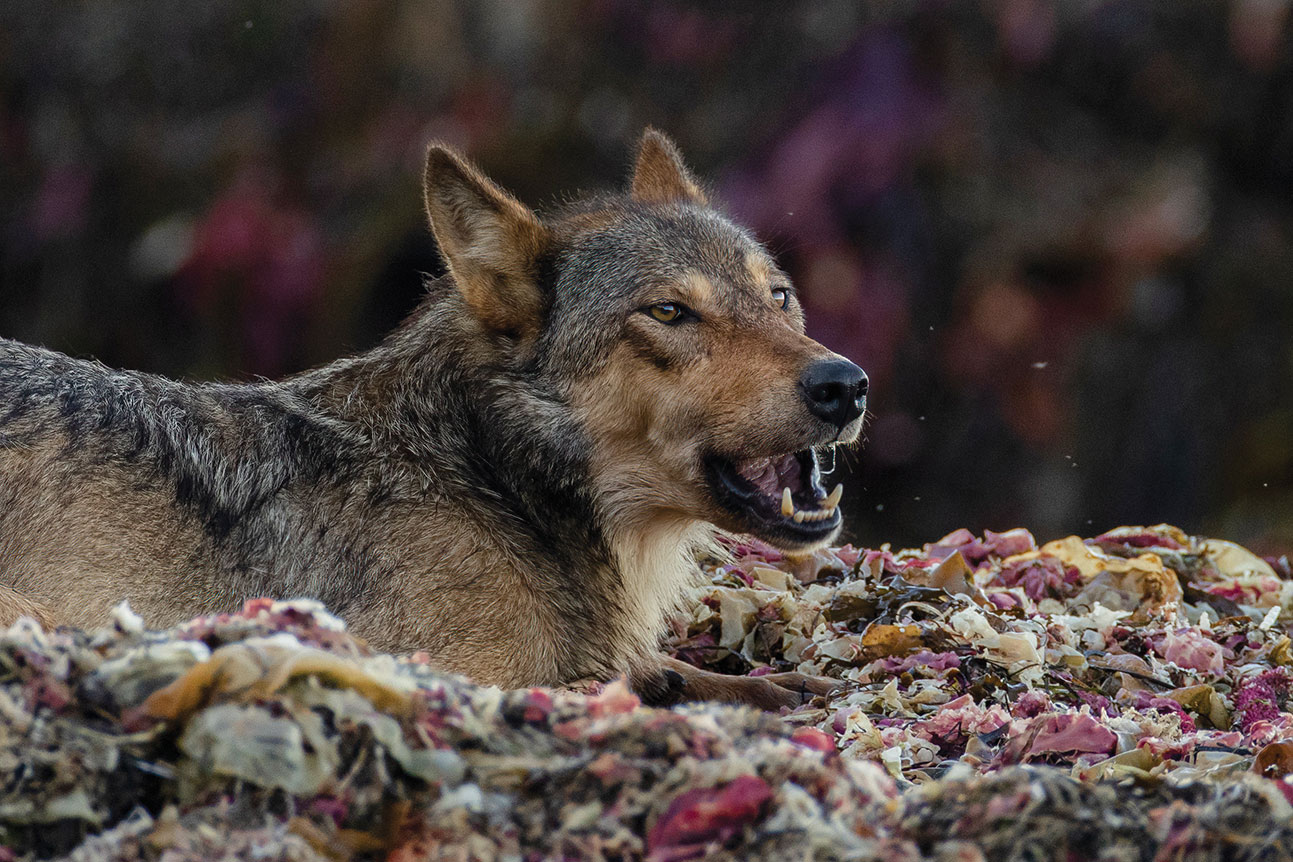 Sea wolves have a diverse diet. This one is having a snack of kelp. (Photo: Steve Woods) 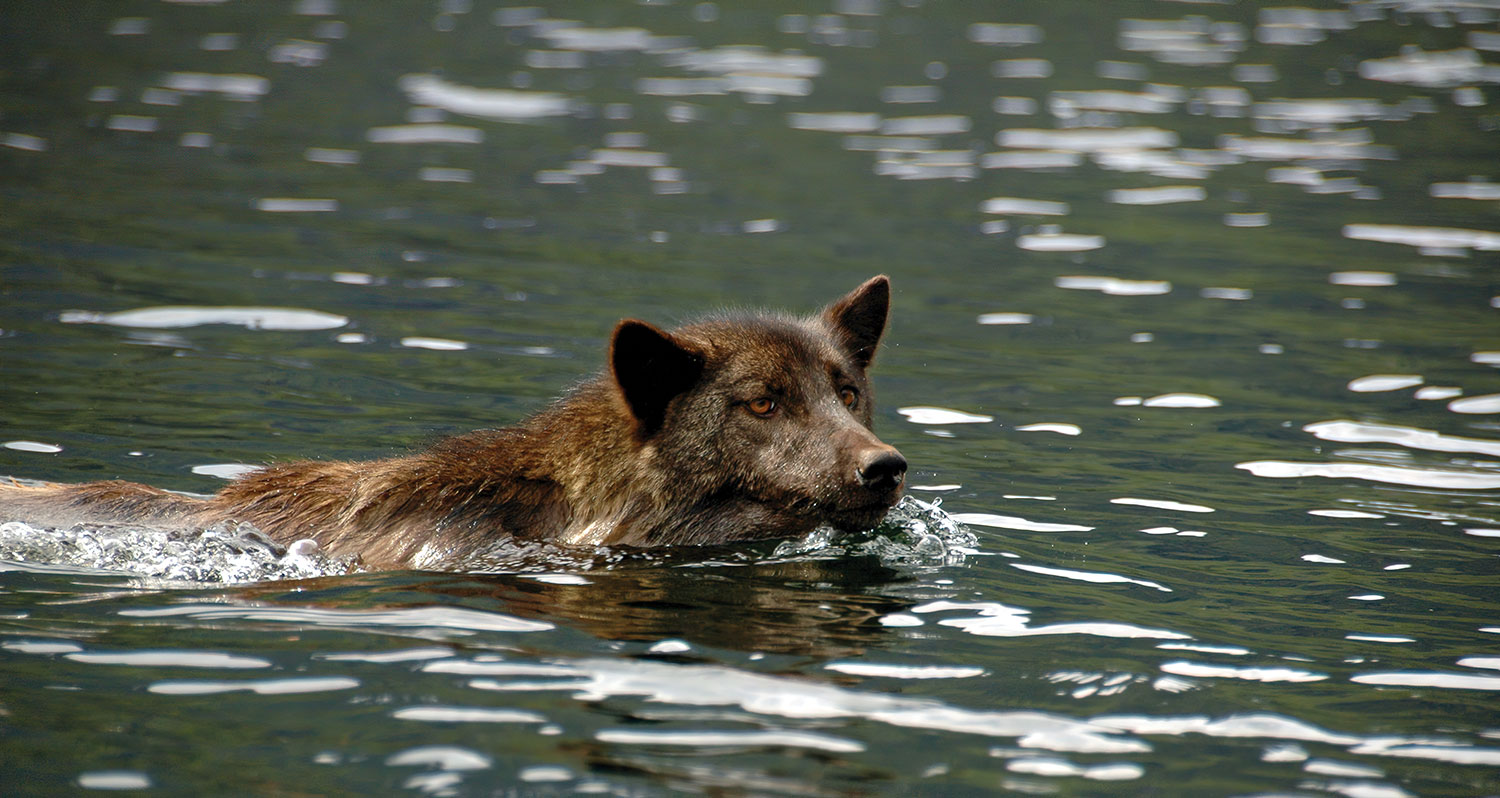 The wolves are powerful swimmers and often move between islands. (Photo: Chris Darimont) 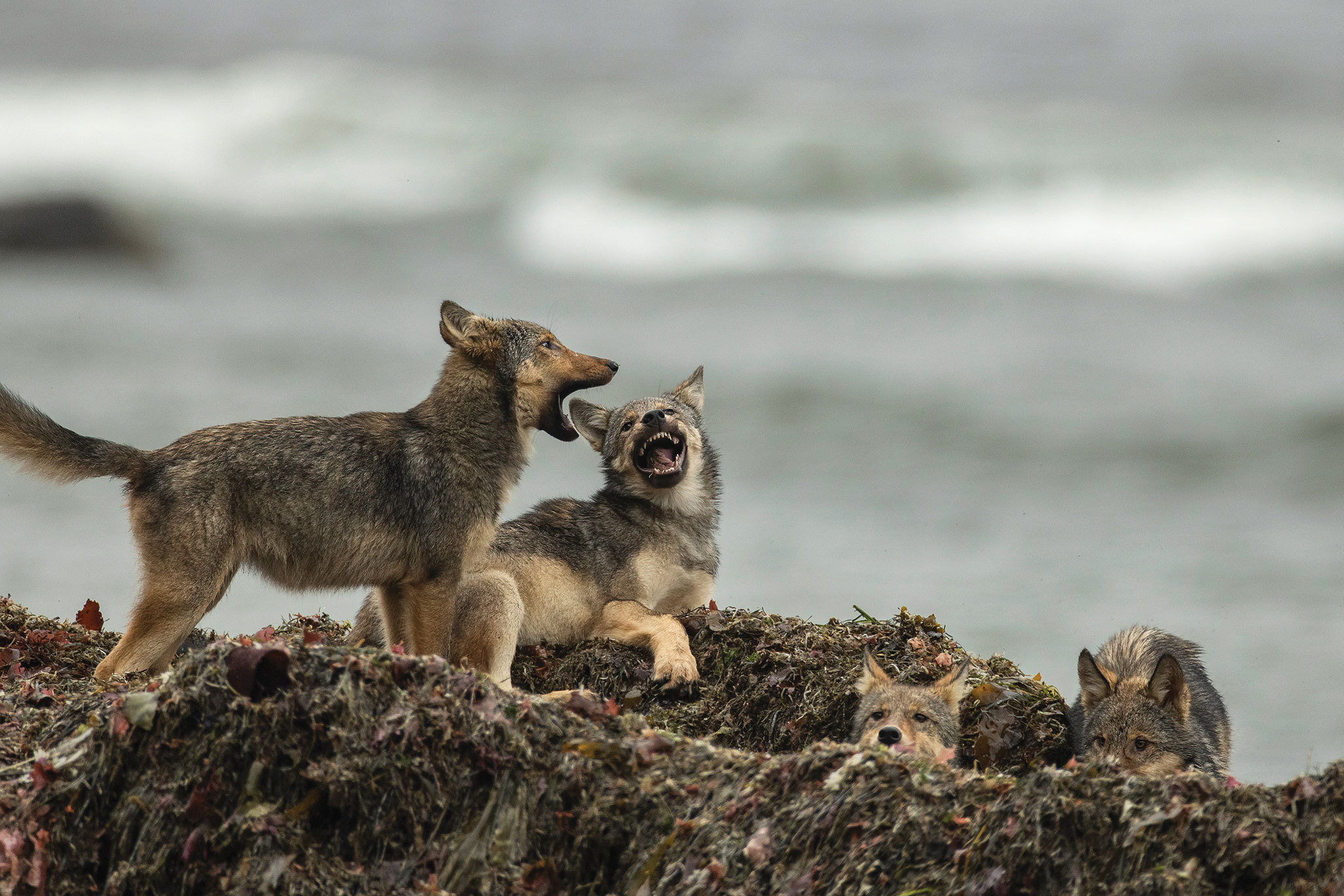 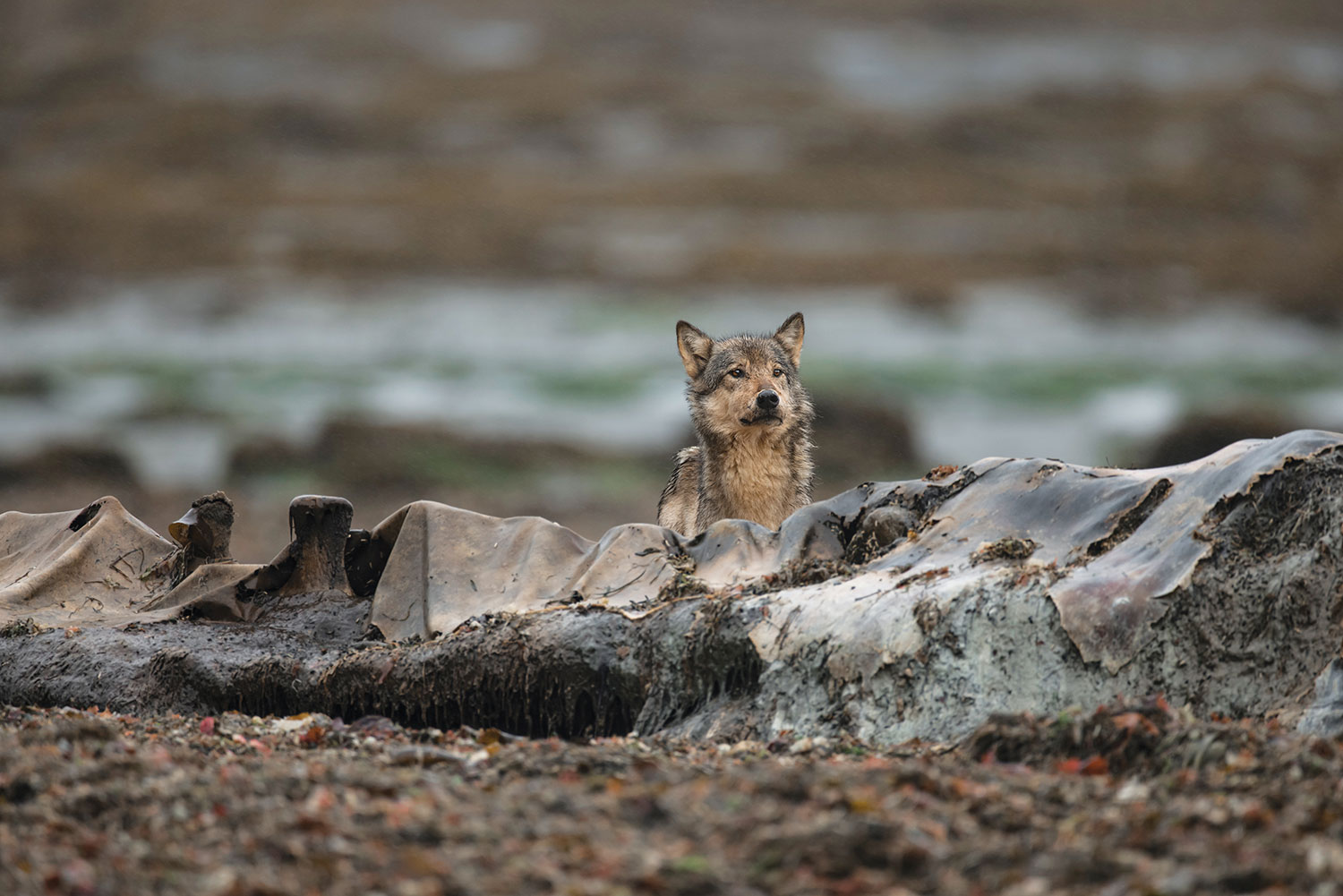 Once upon a time, wolves — next to humans — were the most widely distributed terrestrial animals on Earth. In First Nations’ stories, the wolf is a keystone species and remains a keystone figure in First Nations culture. In Western societies, however, the “big, bad wolf” plays the role of the villain in our tales. We have banished and demonized this majestic animal, and in many places hunted and culled the wolf to near extinction.

When asked about the threats currently facing the coastal wolves, Housty and Paquet point to three that stand out as most significant: industrial logging, climate change and trophy hunting. Logging is detrimental for the obvious reason that it destroys the rainforest habitat of both the wolves and their prey. Clear-cuts disturb the soil and increase runoff, which in turn impacts marine species such as salmon. Climate change, too, is beginning to have an impact. As Housty notes, prey animals are now coming into the territory at different times, and in different numbers. With heat changing the onset of the seasons, their timing is off, and this causes ripples throughout the food chain. 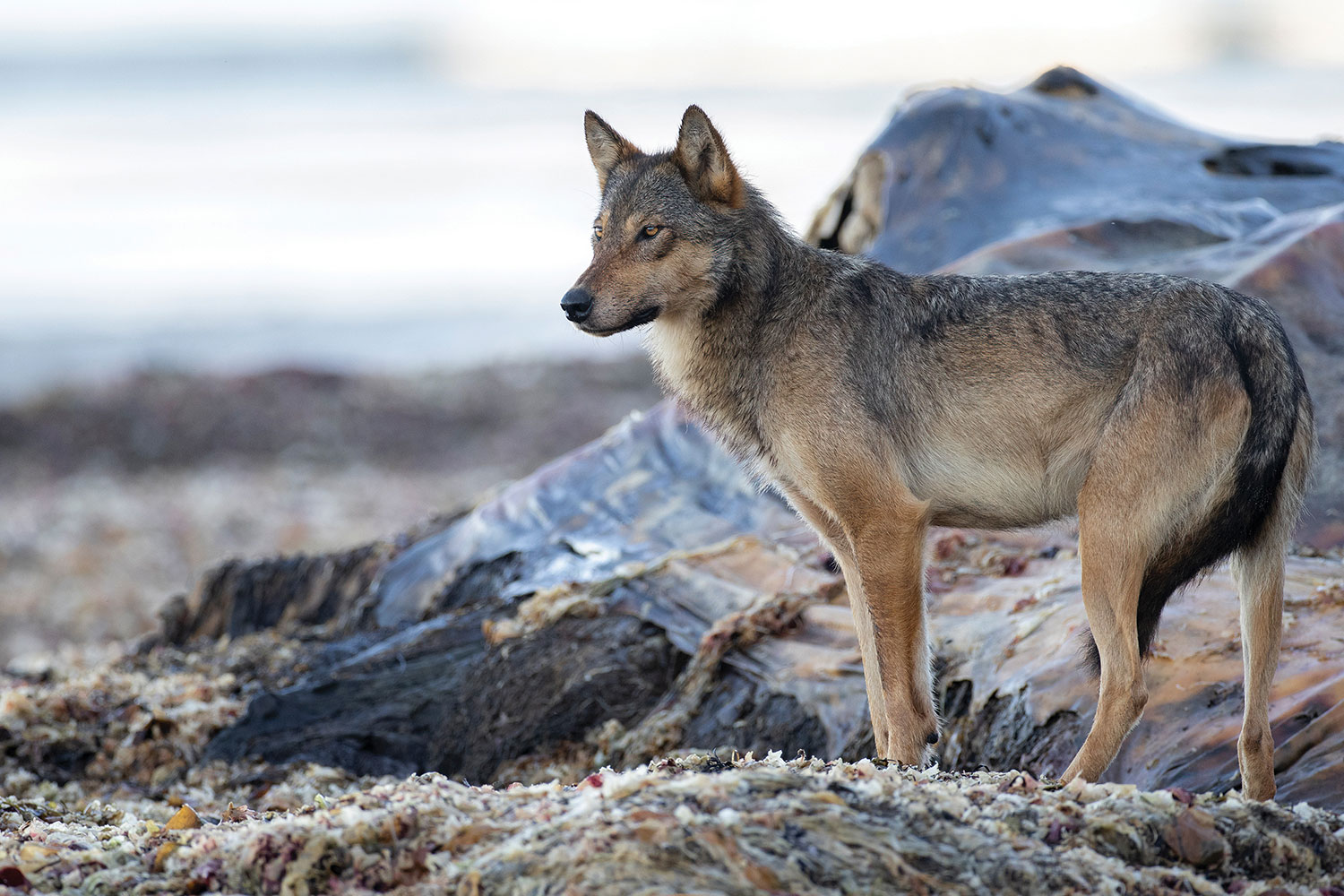 Scavenging wins out over hunting when a whale carcass washes up. (Photo: Steve Woods) 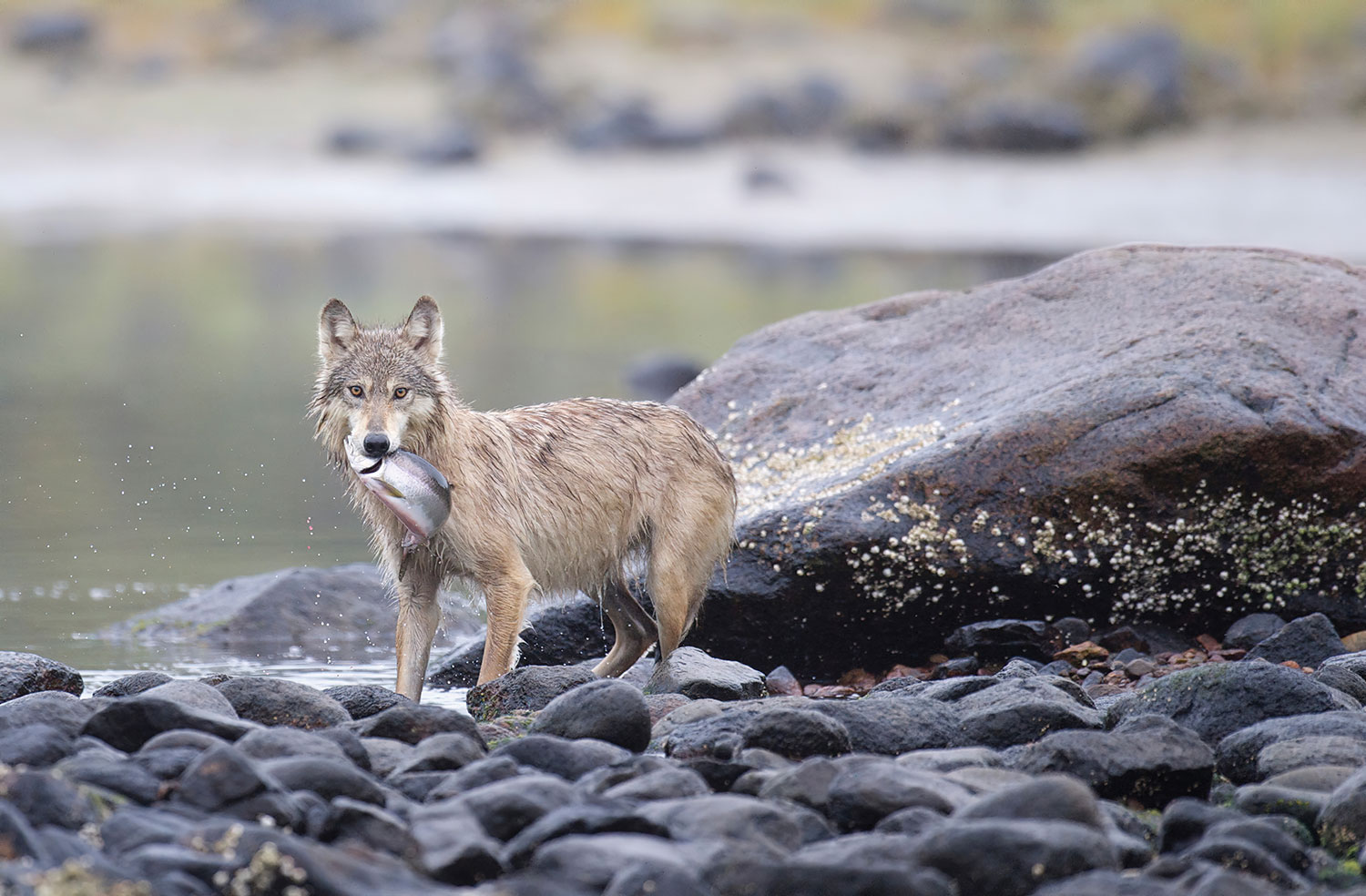 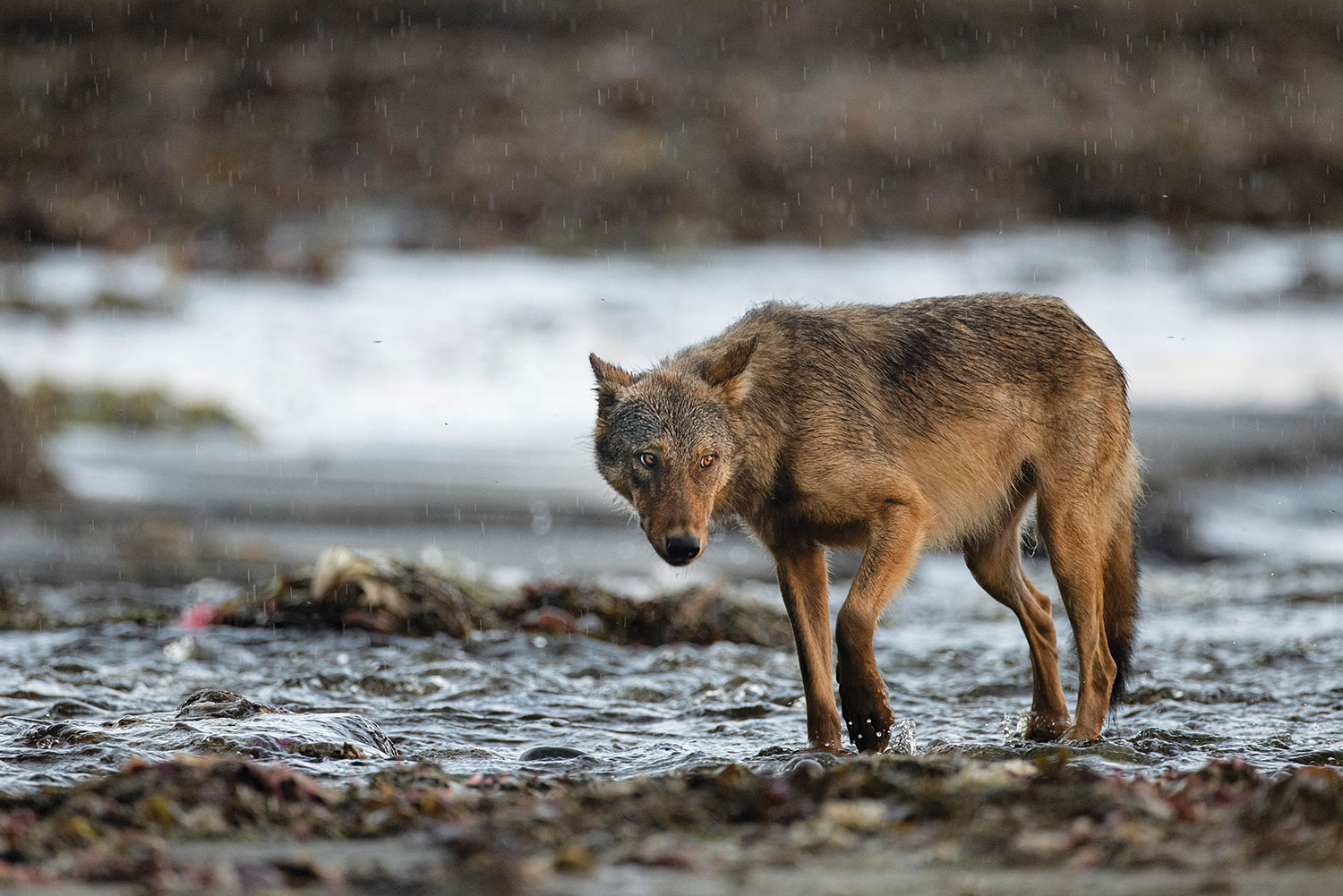 Prowling the beach to see what has washed up. (Photo: Steve Woods) 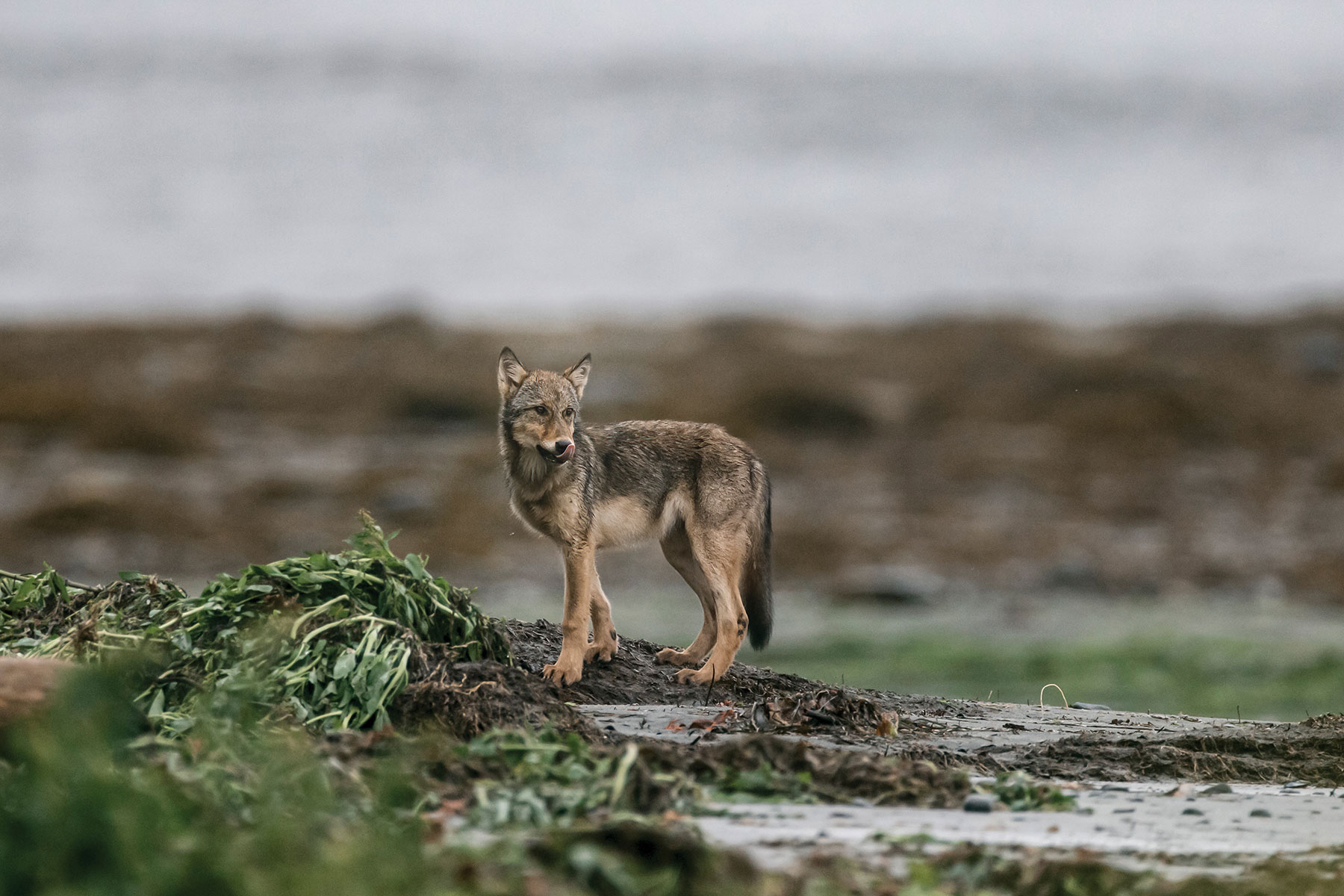 This cub will benefit from a campaign to stop hunting. (Photo: Steve Woods)

But there is also very good news, and it speaks to the power of conservation under Indigenous land management. Today, wolves are largely safe from the threats of logging and hunting in Heiltsuk territory. That’s because 55 per cent of this land is protected, and the rest is under ecosystem management. Only 11 per cent is open to industry. Working together with coastal First Nations, the Raincoast Conservation Foundation has also developed a highly effective campaign to stop hunting. Since 2005, the foundation has raised funds to buy out all the remaining hunting licences in the Great Bear Rainforest and Kitlope Conservancy, bringing a permanent end to commercial trophy hunting in 38,800 square kilometres of B.C.’s Great Bear Rainforest.

This partnership between scientists and First Nations is a leading example of what can be accomplished when both groups work side by side on conservation. Housty estimates that this year, in his territory, the wolf numbers are up. But beyond the numbers, the protection of this ecosystem is something you can literally see on the wolves’ faces. That is, just as men age and grow white beards, a white muzzle on a wolf is an indication of age and maturity. The fact that today there are plenty of sea wolves with white muzzles in the Heiltsuk territory, is a beautiful and powerful testament to their longevity on the coast.