50 years of multiculturalism: Who is gate-keeping Canadianness?

On Oct 8, 1971, then-Prime Minister Pierre Trudeau announced multiculturalism as an official government policy. On the 50th anniversary of the announcement, Canadian Geographic is publishing a series of five essays that explore the theme. The series forms part of Commemorate Canada, a Canadian Heritage program to highlight significant Canadian anniversaries. It gives Canadian Geographic a chance to look at these points of history with a sometimes celebratory, sometimes critical, eye.

I have often argued that multiculturalism is like marriage: even when you have a good match and are happy in the beginning, you have to keep working on it. You have to keep it alive and keep transforming it. Canadian society and Canadian institutions have largely succeeded in that and yet many sore spots remain.

In a recent digital storytelling project, launched in June 2021, we worked with 28 graduate students from across Canada to answer the question: Who am I? Who are these young and not so young graduate students from Yellowknife to Halifax, from Victoria to Hamilton? How do they see themselves and how do others see them? How “visible” are they? And how — or what kind of — Canadian are they made to feel, 50 years after multiculturalism has been proclaimed an official policy in this country?

A few answers emerge quite forcefully and spontaneously in their 28 short films.

Can I just call you Sue? 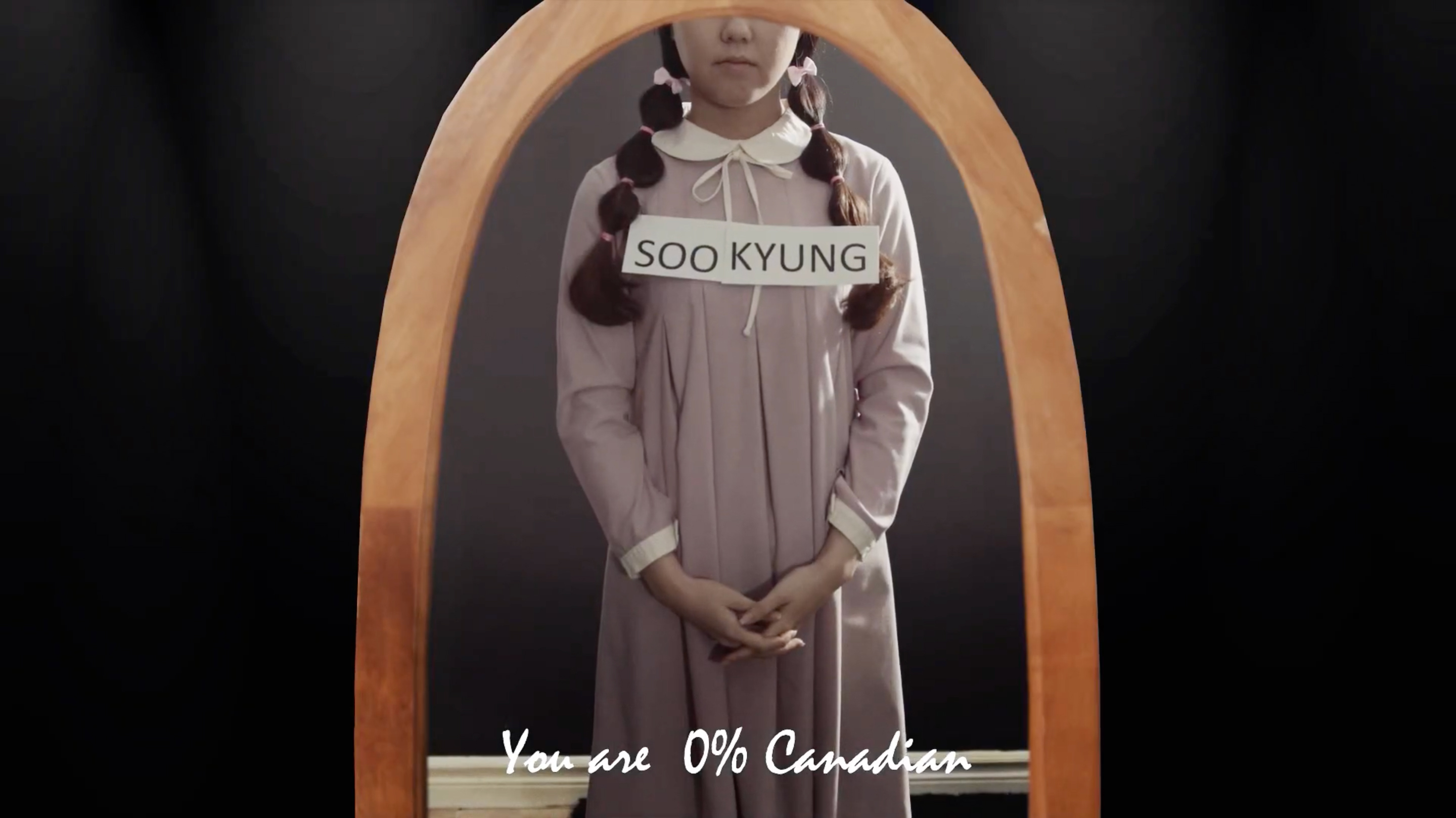 A still from “Can I just call you Sue?” by Soo Kyung Min

While being an immigrant is nearly part of being Canadian, there is still an indirect pressure to assimilate. In “Can I just call you Sue,” Soo Kyung Min invites the viewer to reflect on the pressure to conform, to have an English name: “We have a new student with us today. (...) That is really hard to pronounce. Do you have an English name? Or can I just call you Sue?” says her teacher to 10-year-old Soo.

And the questions that she has faced continue: “You really do not know how to skate? What did you do in your childhood?”

“Is this your natural hair?”

And, later, as she grows up, “Are you not from Canada? Is that your legal name?” At the same time the family and the community put pressure on the immigrant child or adolescent to stick with tradition (use your sticks, not a fork) and keep the customs of the culture of origin. And the question arises, can we compartmentalise a single person? Who is “100 per cent Canadian” and how do you assert that?

Where are you really from? 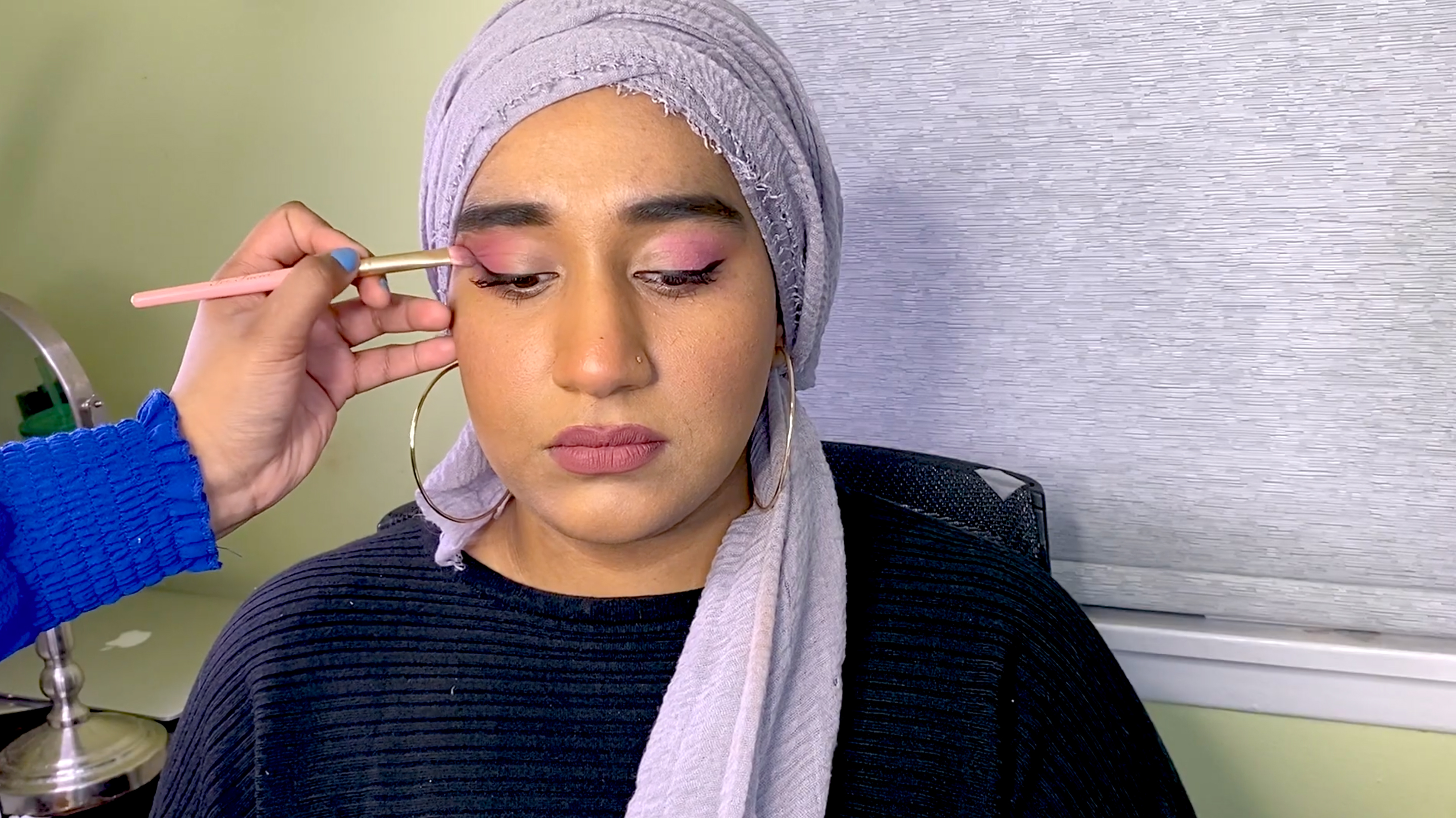 A still from “Existing is Exhausting” by Sana Patel.

These are questions that remain relevant for people born in Canada, too. In the short film “Existing is Exhausting,” Sana speaks of her everyday experiences as a young Muslim woman with a foreign-sounding name: Sana. (What is a Canadian-sounding name? she asks.) People at work think they are being nice by saying: “Oh, Sana; what a beautiful name. Where are you from?”

“I am Canadian,” she replies and then she reflects: “But that was not good enough. Sana is not a Canadian name. What is a Canadian name supposed to sound like? Who is gatekeeping Canadianness?”

The (in)famous question of “where are you really from?” sounds familiar to all Canadians who do not look white (or should I say, Anglo-saxon), even if they are born and raised in Canada — sometimes even if their parents were born and raised in this country. This question has no boundaries: you can be asked when serving at a fast food restaurant, at school, or at an academic conference. Actually, Sana explains it is even more unnerving when it happens in the latter space because this is where you would expect people to be more sensitive and knowledgeable about ethnic and religious diversity. And she asks: “Can I be a normal woman? Do I need to take off my hijab for that? Why the unnecessary labelling?” 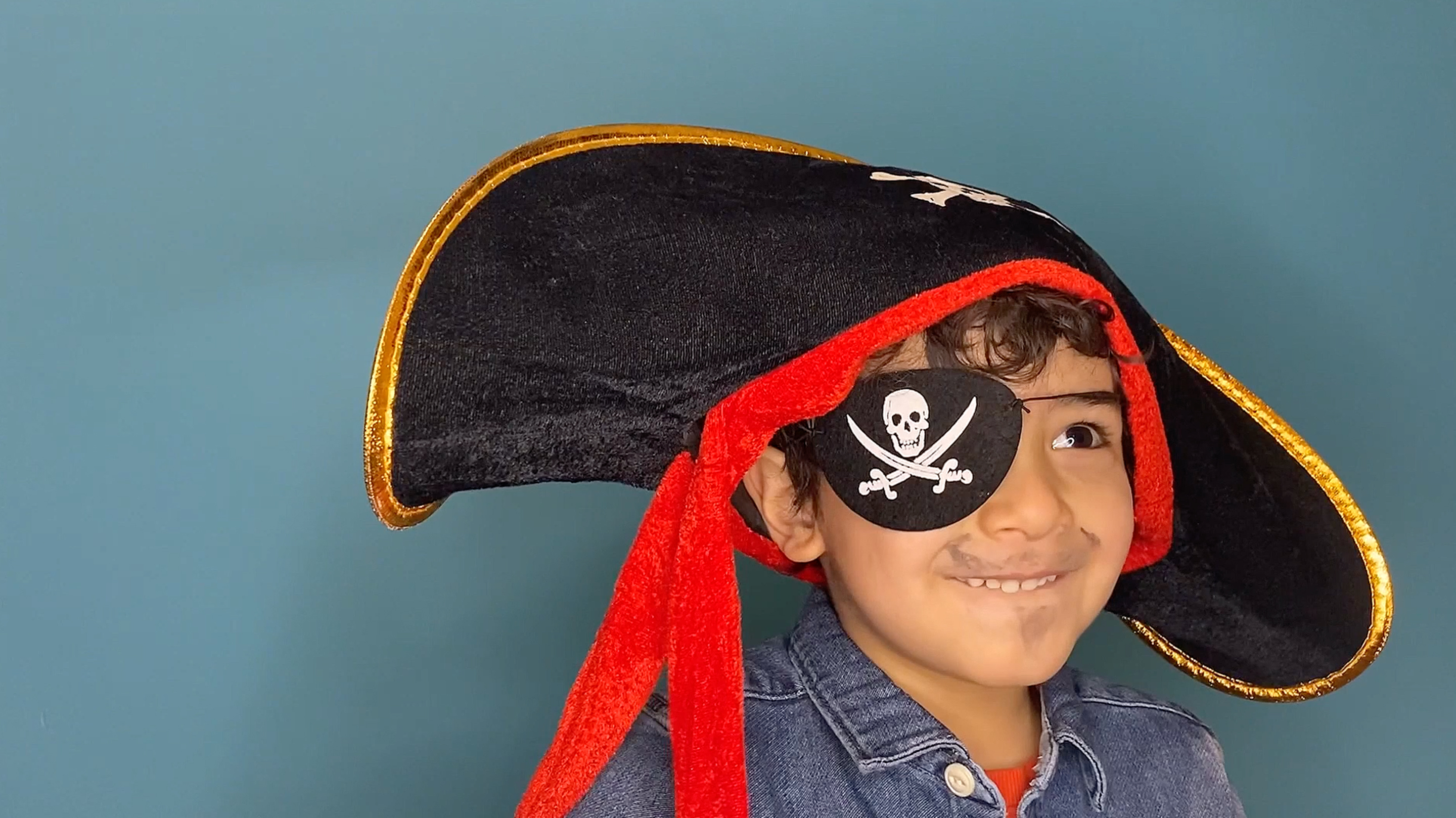 A still from “Pirates Don't Meow” by Danah Elsayed

Danah offers a different perspective in “Pirates Don’t Meow.” You can choose to be identifiable as a young Muslim woman through wearing your hijab and that can make things easier because people already put you in a box. In a way, you wear your identity. However, you also challenge the prevalent categorisations because you are studying, working, having a family and acting in ways different from what is expected based on the stereotype: Well, actually, then pirates do meow! Maybe less often, but they do! And being visibly different can help you feel both more yourself and more Canadian. This is, indeed, an achievement of Canadian multiculturalism.

When you see an Indigenous person, who do you see? 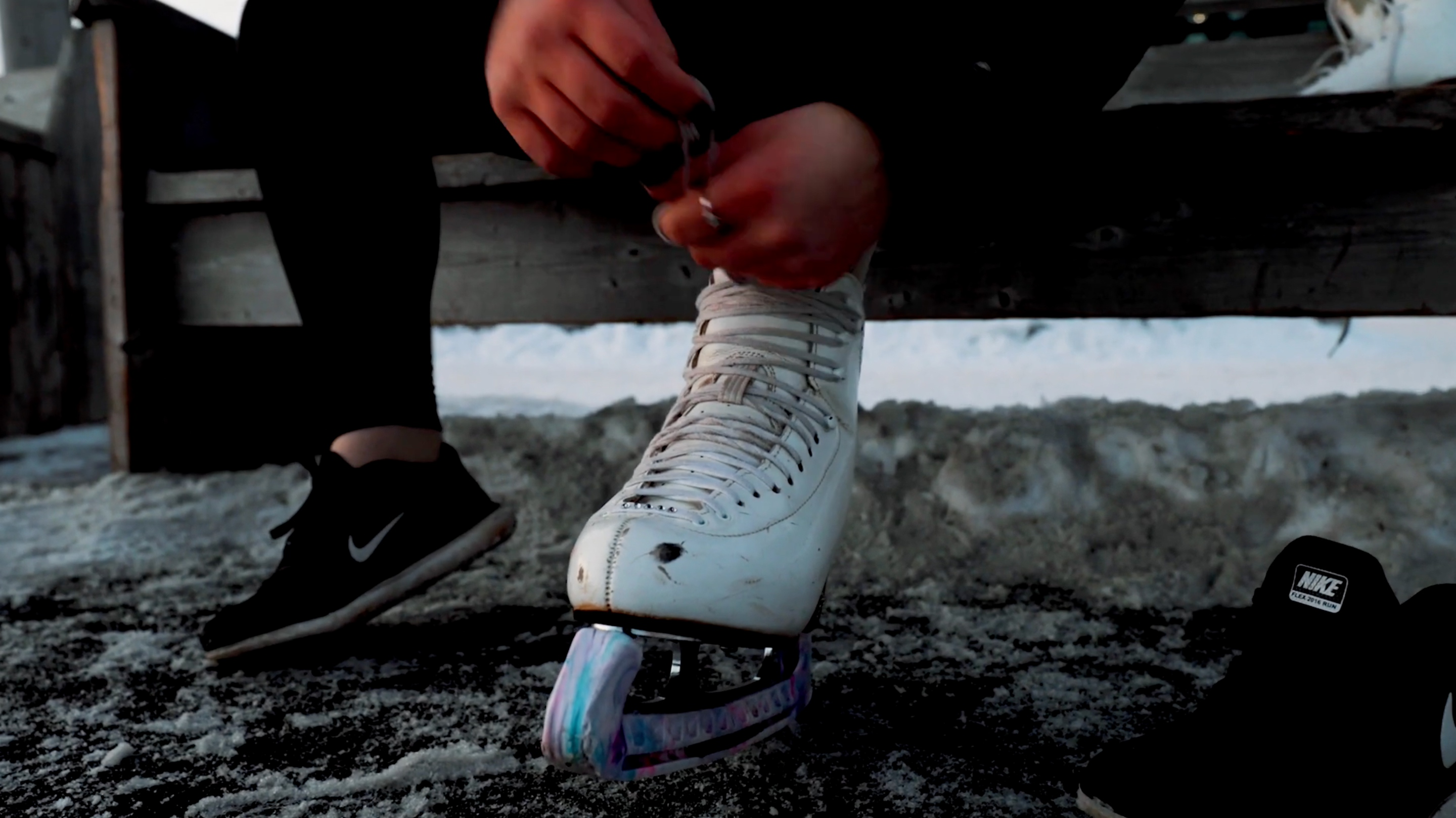 A still from “How do you see me?Nicole Lee

Nicole’s mother is Italian and her father is Indigenous, but she “does not look the part.” She has struggled with it all her life. “When you think of an Indigenous First Nations person, who do you see?” she asks, and confesses that when she went to pick up her status card “every person in that room had their eyes on me.” She was both excited and scared. But she has come to terms with it: “This is me and none can tell me otherwise.”

FINE: Freedom is not Enough 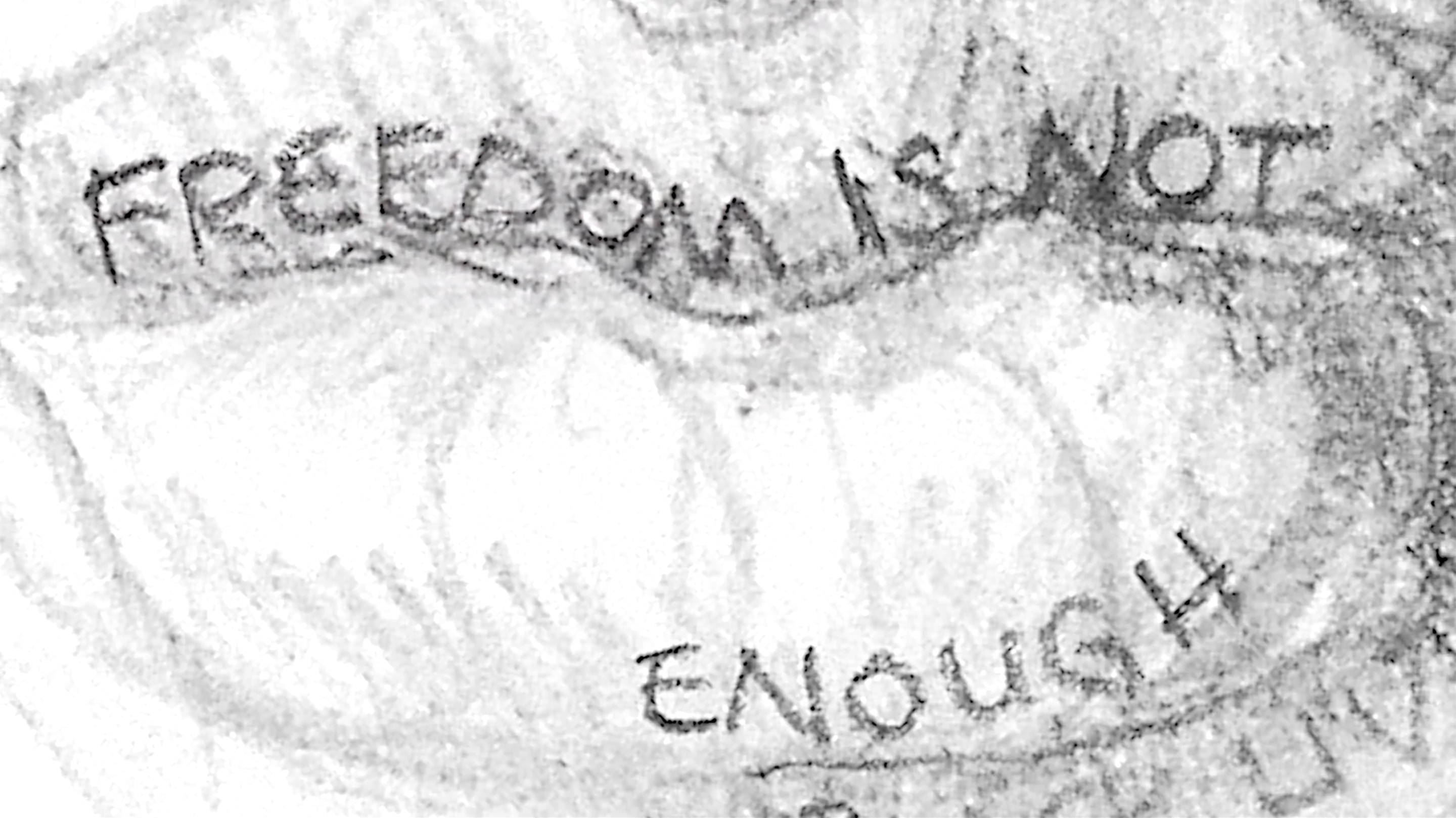 Things have been harsh for Black Canadians. Philip’s parents learnt this the hard way in the 1960s. His mother was told that she was hired because the disgruntled HR manager who hired her was leaving and they wanted to create havoc in the company: “They had never seen a Black person, they did not know what they could do, they never thought [that they could do a great job].” His father was doing a skilled job with an unskilled labour contract and salary. Philip faced racism and won over it in the late 1970s as a Toronto Police Officer. He says you need “allies, mentors, advocates” because while things have improved, freedom is not enough. There is still a long way to go. He adds, “If you are a racialised minority person, you know what I mean; and if you are not, do you care? Should you care?”

Fifty years after then-Prime Minister Pierre Trudeau stated that “no official culture would define the Canadian identity, but it is its cultural diversity that makes the country whole,” Canada is more diverse than ever. Canadians have complex, dynamic and fluid identities and racialised minorities and other migrants claim both their ethnic or religious heritage and their full-fledged belonging to Canada. Fifty years after, we can say that Canada is on the right path, but there is a long way to go to fulfill the multicultural ideal.

Anna Triandafyllidou holds the Canada Excellence Research Chair in Migration and Integration at Ryerson University. Prior to moving to Canada in 2019, she was Robert Schuman Chair at the European University Institute’s Global Governance Program in Florence, Italy. She has worked and lived in Italy, Belgium, Greece, the U.K. and the U.S., is the mother of four boys and is still seeking to come to terms with being a new Canadian and a settler in this land.