5 endangered species the Calgary Zoo has saved from extinction

Sandie Black canoes down a lake in Lakeland Provincial Park, the air mild and the sun shimmering in the September sky. She had just paddled through a narrow stillwater between lakes, drifting overtop and alongside reeds and lily pads, and the water was now opening out onto the next lake where she would continue her journey.

There is almost no wind, so she can hear the sound of birds flying very close overhead, their wings swooping in the air and cutting through the stillness.

Suddenly, she is overcome with emotion.

Four white whooping cranes fly over her head, gliding across the sky and calling out into the wild. Black turns to her friend giddily, her eyes wide and her smile beaming.

Black, Calgary Zoo’s head of veterinary services, has been working to save the endangered whooping crane since the mid 1990s. It is a species that only had 20 birds left in the wild three decades ago, and the moment she spotted them from her canoe three years ago was the first time she had seen them in Canada.

“When I saw these birds out in the wild and in their habitat, I was just beside myself.” she describes. “It seemed so meaningful that, just by chance, four of them flew over top of my head. It represented a whole body of work that I have been involved with over the past few decades.” 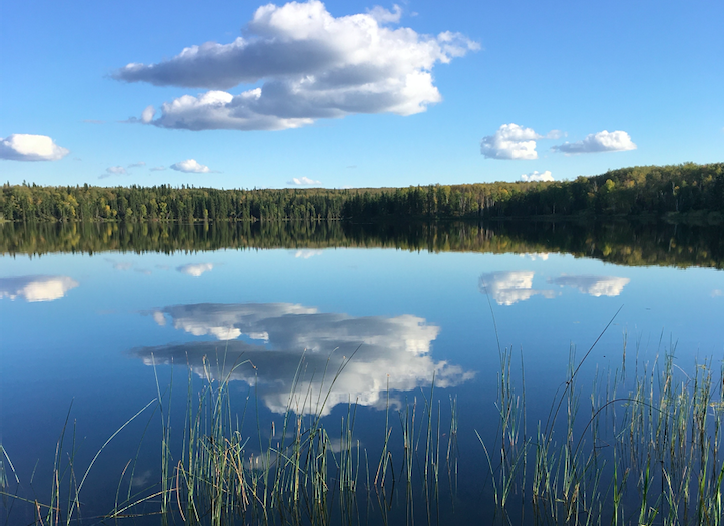 In September 2017, Sandie Black was on a canoe trip with her friend in Lakeland Provincial Park when she spotted four whooping cranes in their natural habitat. (Photo: Sandie Black)

Today, there are 826 whooping cranes in the wild. This is, in part, thanks to the Calgary Zoo, which has been instrumental in saving these birds from extinction, along with four other endangered species: the Vancouver Island marmot, burrowing owl, greater sage-grouse and northern leopard frog.

“It’s hard to express the profound reward that you get when taking on an immense challenge like saving endangered species,” says Axel Moehrenschlager, the zoo’s director of conservation and science. “It’s a situation where, right off the bat, the odds are stacked against you. The fact that species are endangered means something has gone terribly wrong.”

The Calgary Zoo is Canada’s only facility that breeds whooping cranes for release into the wild, using incubation research to identify ways to increase egg production. The program also uses artificial insemination and other breeding practices to help the whooping crane population bounce back, Black explains.

As a member of the International Whooping Crane Recovery Team which works with the Calgary Zoo, Black also collaborates with other experts from Canada and the United States to develop conservation strategies.

“The passion and the depth of the work to save these animals is incredible,” she says. “What drives this conservation work is people’s expertise and our ability to work together in multi-functional layered teams. We are so much better we work together.”

At the Calgary Zoo, the burrowing owl program is in its third year. As part of their head-starting program, owlets unlikely to survive are brought into captivity for 10 months before they are tagged and released in pairs to lay eggs in the wild .

The zoo uses radio transmitters to monitor 143 sage grouse and their movements in the wild, studying the effectiveness of various breeding techniques like incubation processes or hen-rearing.

For Jamie Dorgan, the director of animal care at the Calgary Zoo, it is a program that he says is especially close to his heart.

“In Canada, the greater sage grouse has been seeing a big decline to the point where we were worried that within a decade, they could just disappear completely in the prairies,” he says, pointing to how about 80 per cent of the greater sage grouse population has disappeared over the past 30 years because of habitat loss and degradation. “So we are fortunate to be able to step in and help. It has been incredibly rewarding.”

In partnership with the Nature Conservancy of Canada and Parks Canada, the Calgary Zoo has significantly helped bring back the sage grouse population. In 2018, a conservation site was purchased in Alberta for the purpose of releasing these endangered birds. Thanks to these efforts, about one hundred chicks are released by the Calgary Zoo every year into the wild.

“It’s incredibly inspiring to be able to see this, but also very disheartening to know many other species have gone extinct over the past 50 and 100 years,” Dorgan says. “Any time we have the ability to participate and try to save a species that could be gone forever, it’s incredibly important to do so.”

Of course, Dorgan says there are always challenges. The breeding season can be incredibly emotional, as many animals won’t survive in the wild. But, he says it is incredibly important to put the animals back into their natural setting so their populations can gradually rebound.

The zoo has also helped save the Vancouver Island marmot, an endangered species that is unique to Canada and found nowhere else on the planet. In 2008, it was estimated that only 30 marmots existed in the wild, but the population has significantly grown since then because of the Calgary Zoo’s breeding program. 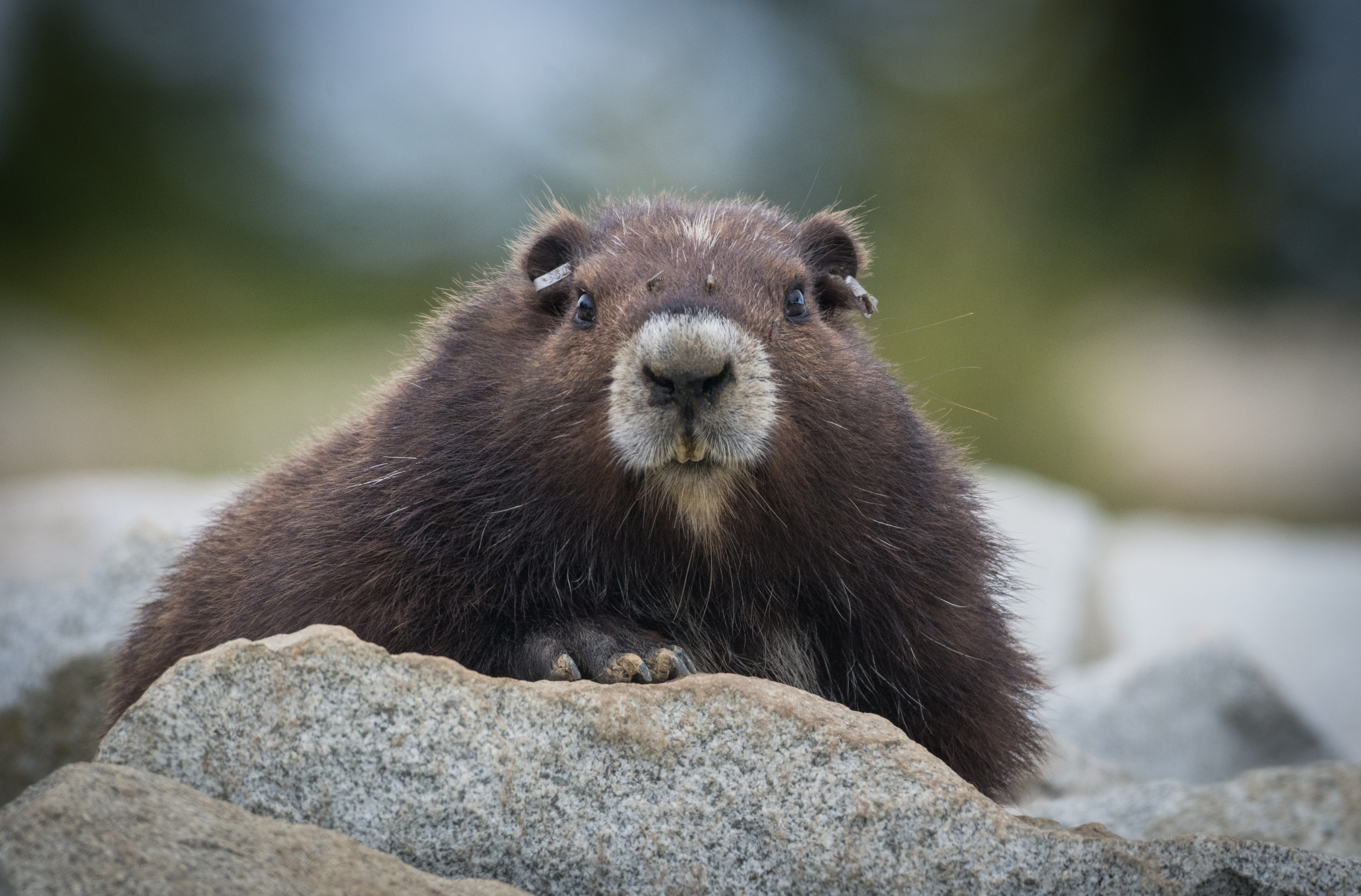 The Vancouver Island marmot is uniquely Canadian and considered to be one of the rarest mammals in the world. (Photo: Troy Wood/Can Geo Photo Club)

With only one surviving native population of the B.C. northern leopard frog left in the wild, the Calgary Zoo is also focusing its conservation expertise on this endangered species.

It’s not just helping recover species unique to Canada that the Calgary Zoo prides itself on. Conservation is an international effort and only through a collaborative effort can endangered species thrive again,  Moehrenschlager says.

“We have 21 permanent conservation scientists from 35 different universities and have collective experience in over forty countries. Many wouldn’t expect that of a zoo, but it shows the kind of commitment we take,” he says. He explains the Calgary Zoo is helping protect the world’s most endangered antelope as well as bringing extinct species back into the wild, such as the Guam Kingfisher that went extinct 30 years ago.

As thriving species are integral to a healthy ecosystem and, consequently, a healthy planet, Moehrenschlager says it is necessary to protect these species. Though not all species survive breeding and reintroduction efforts, he says the Calgary Zoo will continue to push onwards.

“I feel like sometimes we fight an underdog fight, but it’s worth the attempts,” he says. “Often we are successful, sometimes we fail. But the alternatives of not acting are unthinkable.”