Three Canadian photojournalists among those honoured for visual storytelling
By Sabrina Doyle
February 15, 2017

125 countries. 5,034 photographers. 80,408 images. This year's World Press Photo Contest drew entries from around the world, and following an intensive judging process, has announced the 45 winning photographers.

Among them was Albertan photographer Amber Bracken, whose work has previously appeared in Canadian Geographic. Two other Canadian photojournalists – Darren Calabrese and Giovanni Capriotti – were also awarded prizes.

The World Press Photo 2017 Exhibition will be visiting Canada via Montreal and Chicoutimi from August 30 to Oct. 1 and Oct. 20 to Nov. 12, respectively.

Below is a selection of the winning images. 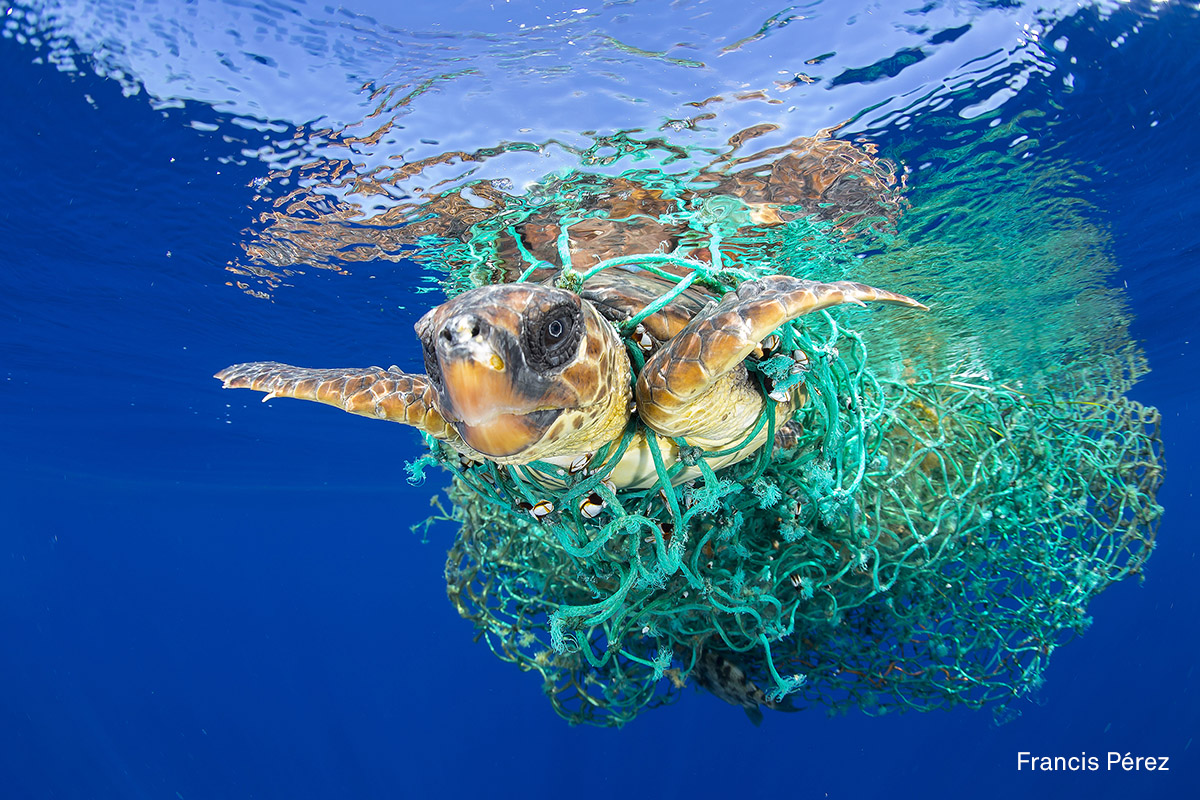 A sea turtle entangled in a fishing net swims off the coast of Tenerife, Canary Islands, Spain, on 8 June 2016. Sea turtles are considered a vulnerable species by the International Union for Conservation of Nature. Unattended fishing gear is responsible for many sea turtle deaths. (Photo: Francis Pérez 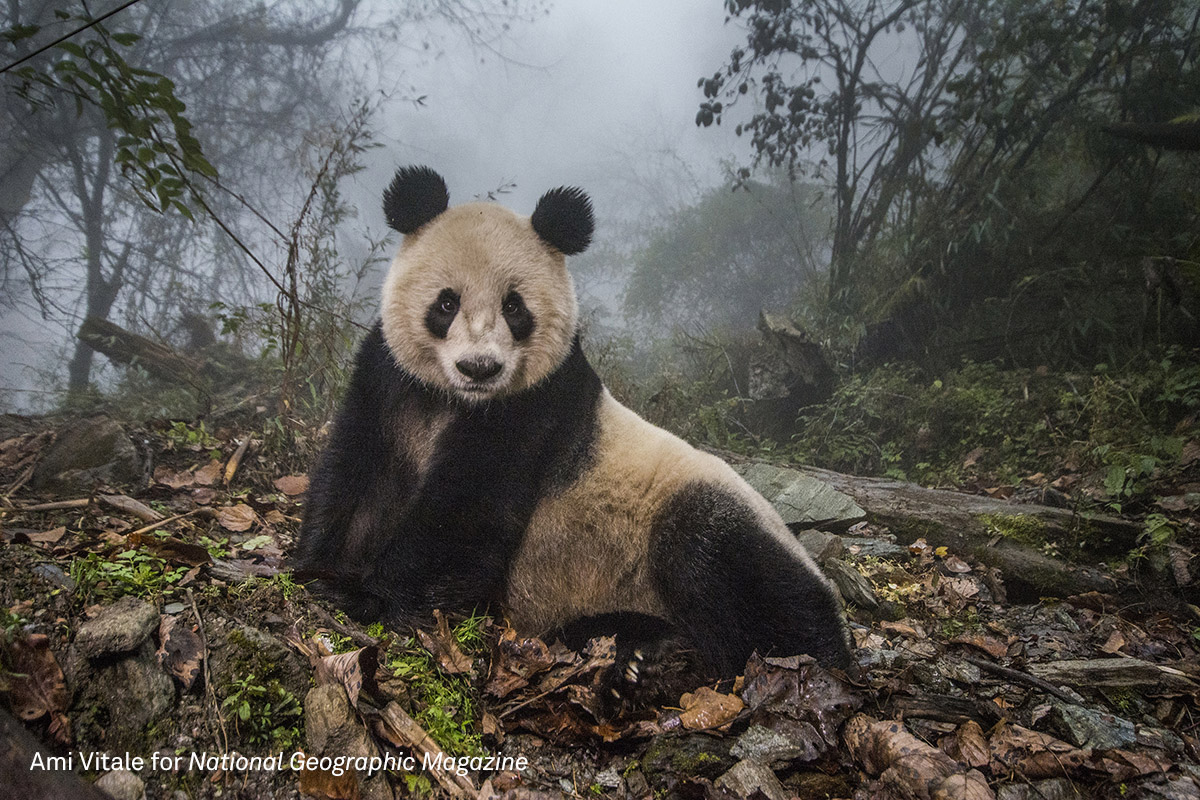 Ye Ye, a 16-year-old giant panda, lounges in a massive wild enclosure at a conservation center in Wolong Nature Reserve. Her 2-year-old cub, Hua Yan ("Pretty Girl") was released into the wild after two years of "panda training". Her name, whose characters represent Japan and China, celebrates the friendship between the two nations. (Photo: Ami Vitale) 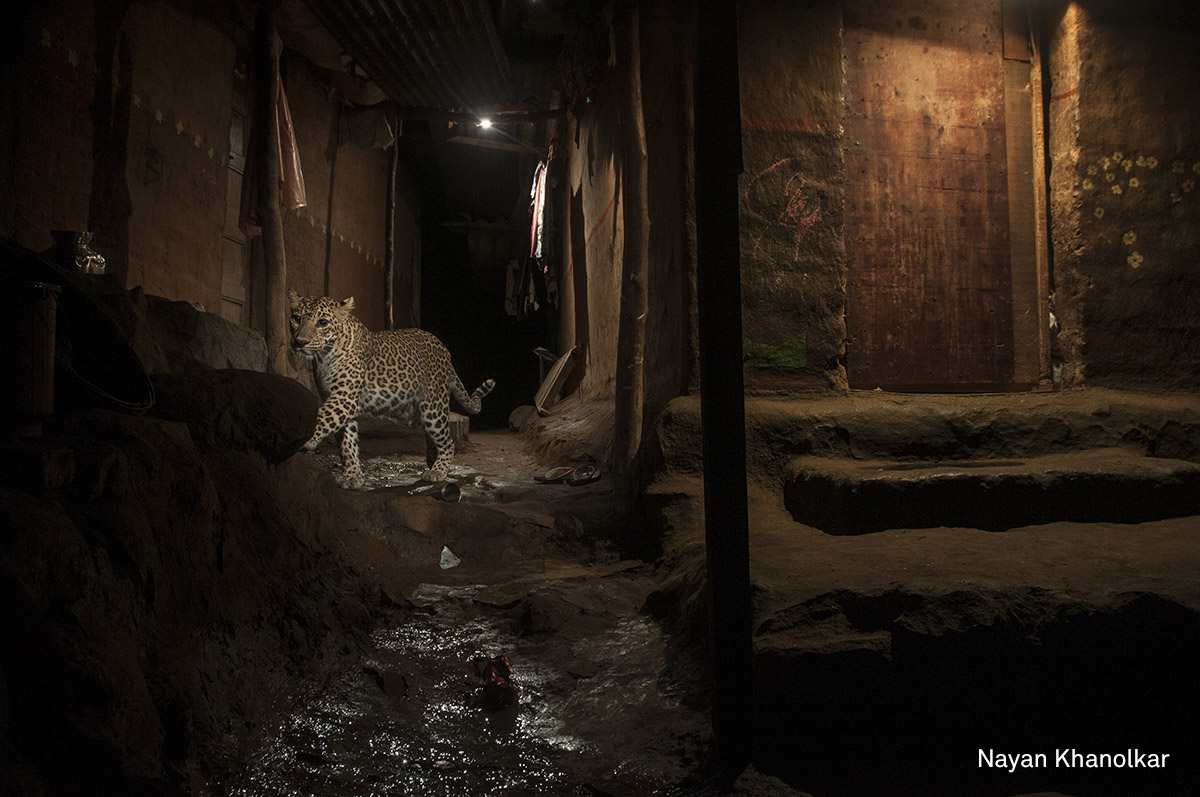 A wild leopard strolls through Sanjay Gandhi National Park, a protected area in the northern part of Mumbai city, India, on 24 September 2016. The leopard is on its nocturnal prowl in the adjacent human settlements in search of food, which in these areas is typically dogs or pigs. (Photo: Nayan Khanolkar) 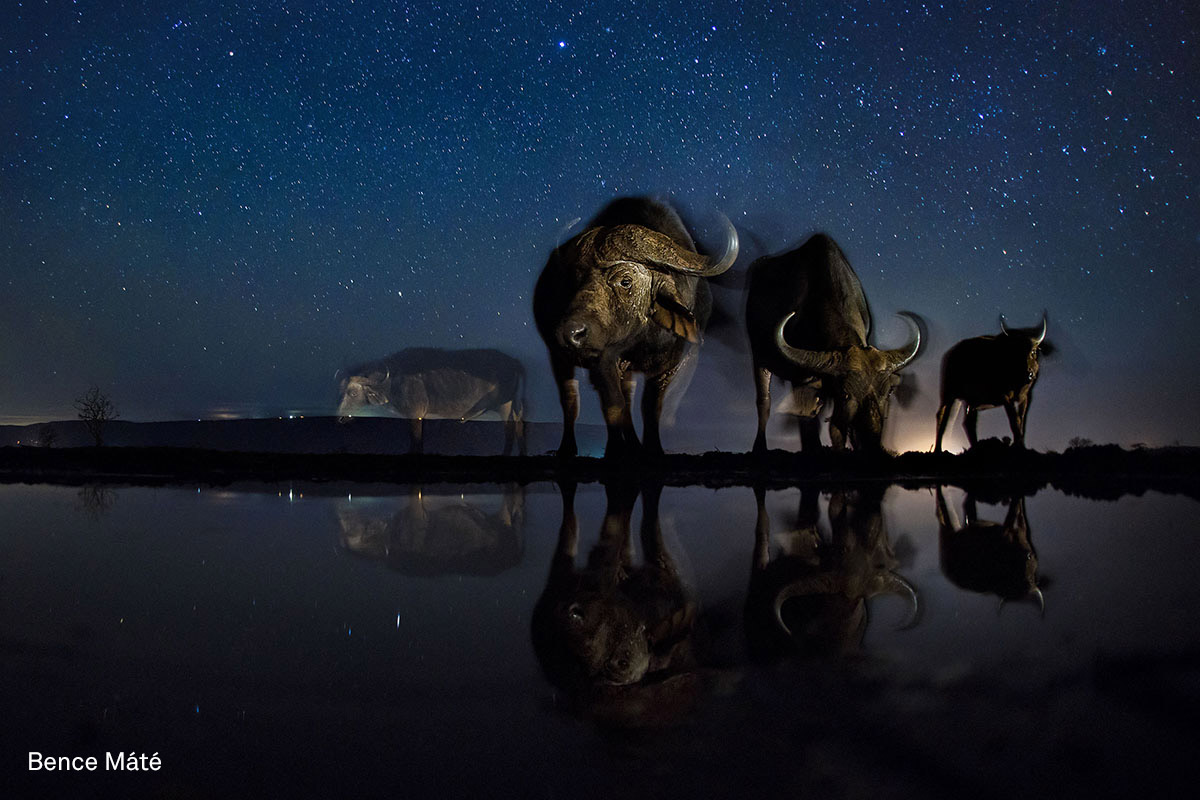 Buffalos at the drinking station. These photos combine a well-known natural phenomenon: the starry sky and portraits of wild animals not visible to the naked eye. The series needed very accurate planning, research and preparation as the photos were made with remote control, and no modification was possible while capturing the photos. (Photo: Bence Máté) 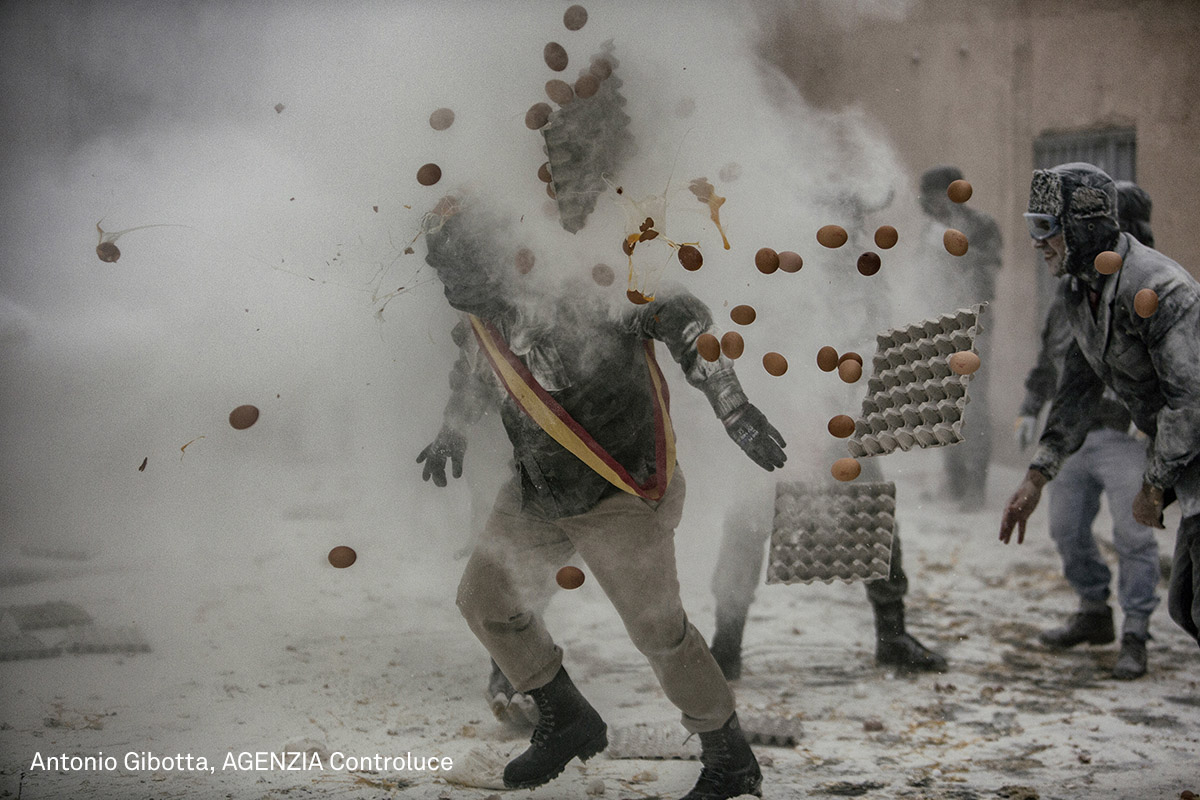 On 28 December each year, the “Floured War" takes place in Ibi in the province of Alicante, Spain. During the festival, the citizens are divided into two groups: the 'Enfarinat' (the floured) group simulates a coup d'etat and a second group tries to calm the rebellion. The teams play with flour, water, eggs and colored smoke bombs. The 200-year-old tradition is known as “Els Enfarinats”, marking the biblical Massacre of the Innocents by King Herod. (Photo: Antonio Gibotta, Agenzia Controluce) 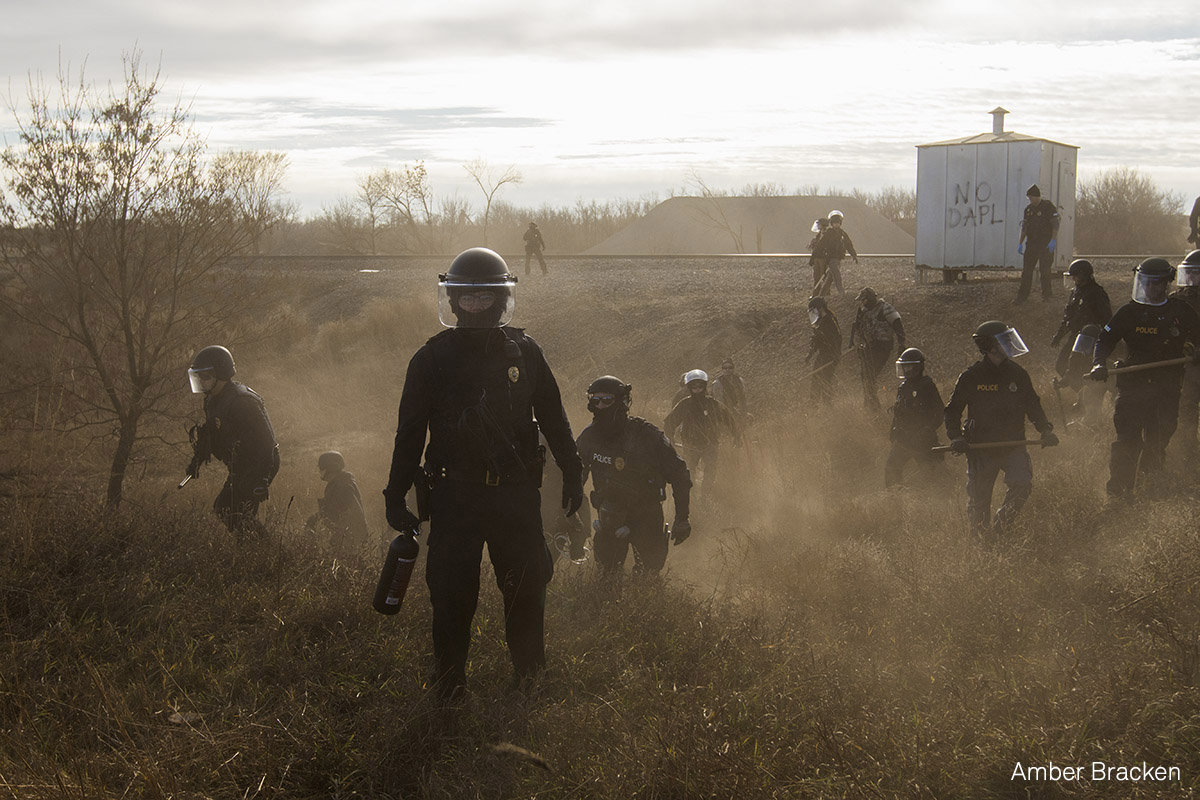 Riot police clear marchers from a secondary road outside a Dakota Access Pipeline (DAPL) worker camp using rubber bullets, pepper spray, tasers and arrests. In other incidents they've employed militarized vehicles, water canons, tear gas and have been accused of using percussion grenades.
For nearly 10 months, members of the Standing Rock Sioux tribe and their allies camped out in opposition to the Dakota Access Pipeline crossing their territory and threatening their water supply. The estimated $3.78 billion project, backed by Energy Transfer Partners, is nearly complete, covering almost 1,172 miles. In military vehicles and body armor, police used tear gas, pepper spray, rubber bullets, and water cannons against the protesters, and have been accused of inhumane treatment of arrestees. (Photo: Amber Bracken) 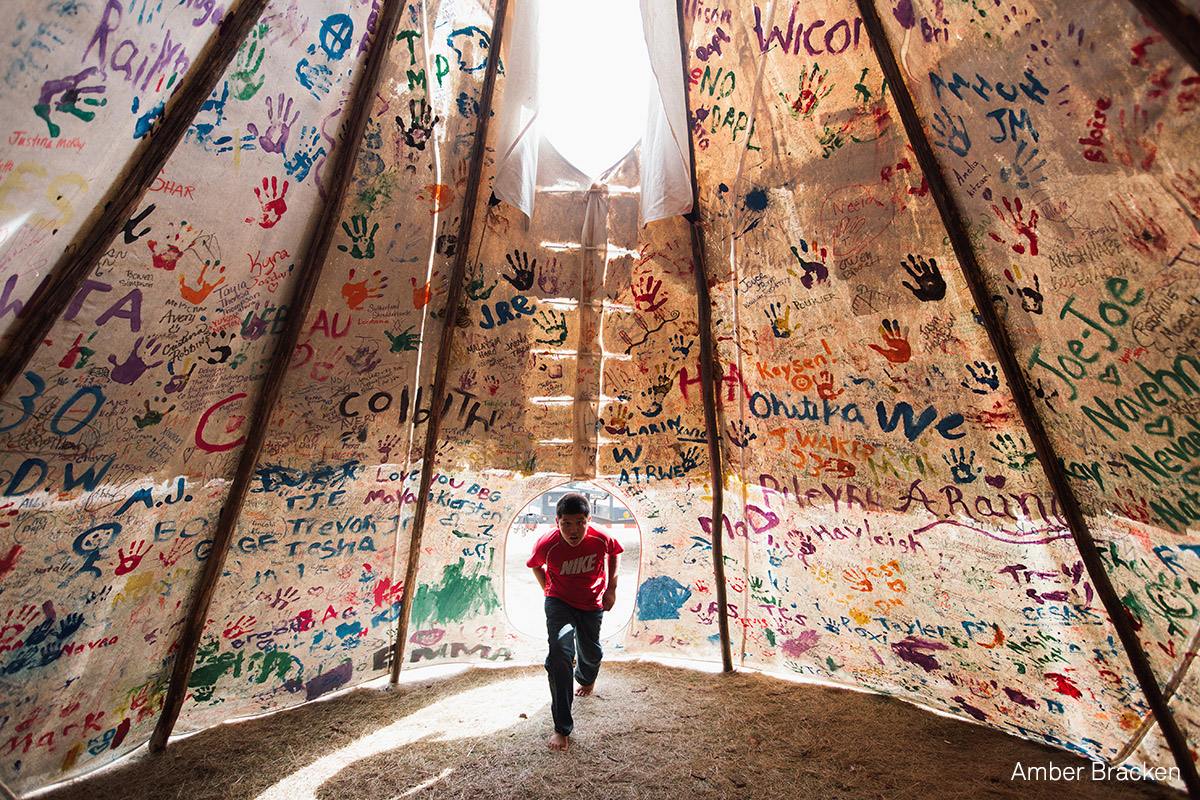 Jesse Jaso, 12, enters the Unity Teepee, at the Sacred Stone Camp. The teepee is signed by camp supporters from all over North America and around the world. Oceti Sakowin, or the Seven Council Fires, is the true name of the great Sioux nation and refers to the coming together of the different factions of the tribe. Oglala, Cheyenne, Ut, Cree, Hopi and non-indigenous all are among the 200+ tribes represented in the camps and on the front lines. The last time there was a similar gathering was before the Battle of the Little Bighorn, 1876. (Photo: Amber Bracken) 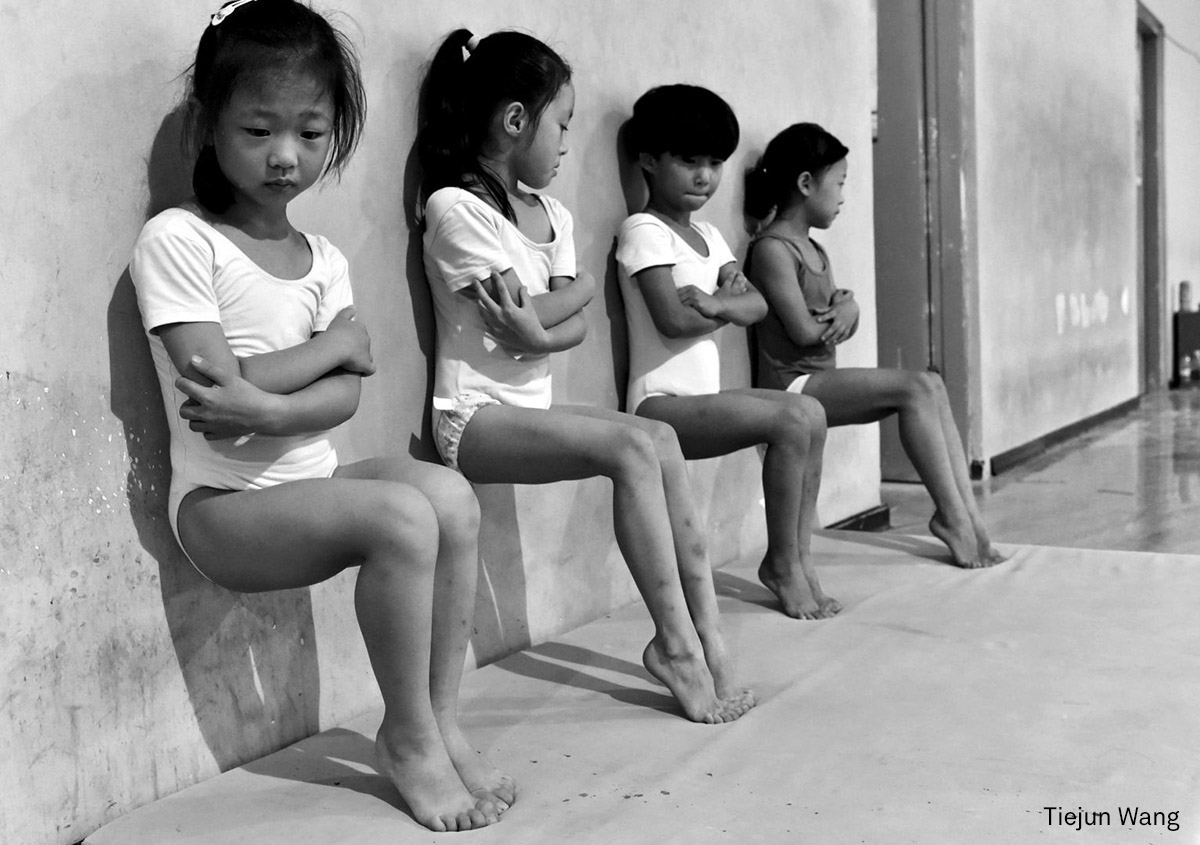 Four students of a gymnastics school in Xuzhou, China, do toe-pressure training for 30 minutes in the afternoon. (Photo: Tiejun Wang) 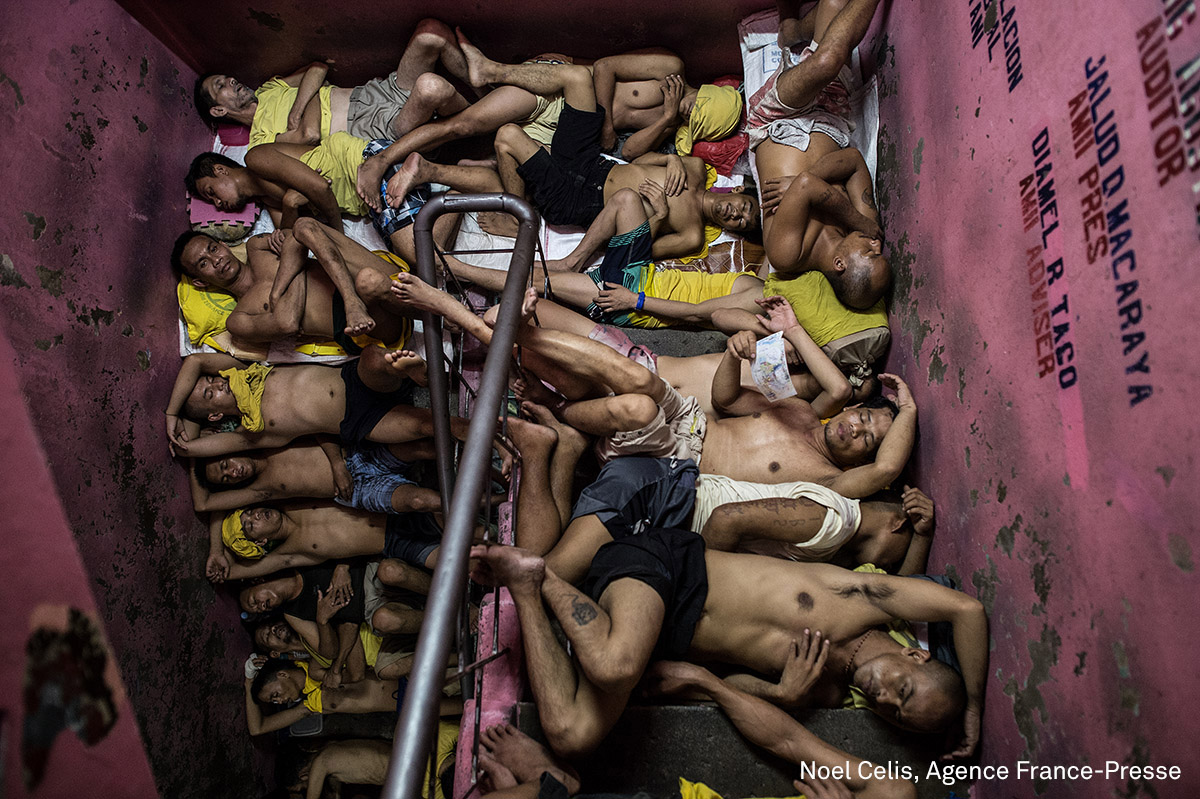 The photos show scenes from Quezon City Jail, one of the Philippines' most overcrowded prisons. Conditions are getting worse as police wage an unprecedented war on crime. There are 3,800 inmates at the jail, which was built six decades ago to house 800, and they engage in a relentless contest for space. Men take turns to sleep on the cracked cement floor of an open-air basketball court, the steps of staircases, underneath beds and hammocks made out of old blankets. (Photo: Noel Celis, Agence France-Presse) 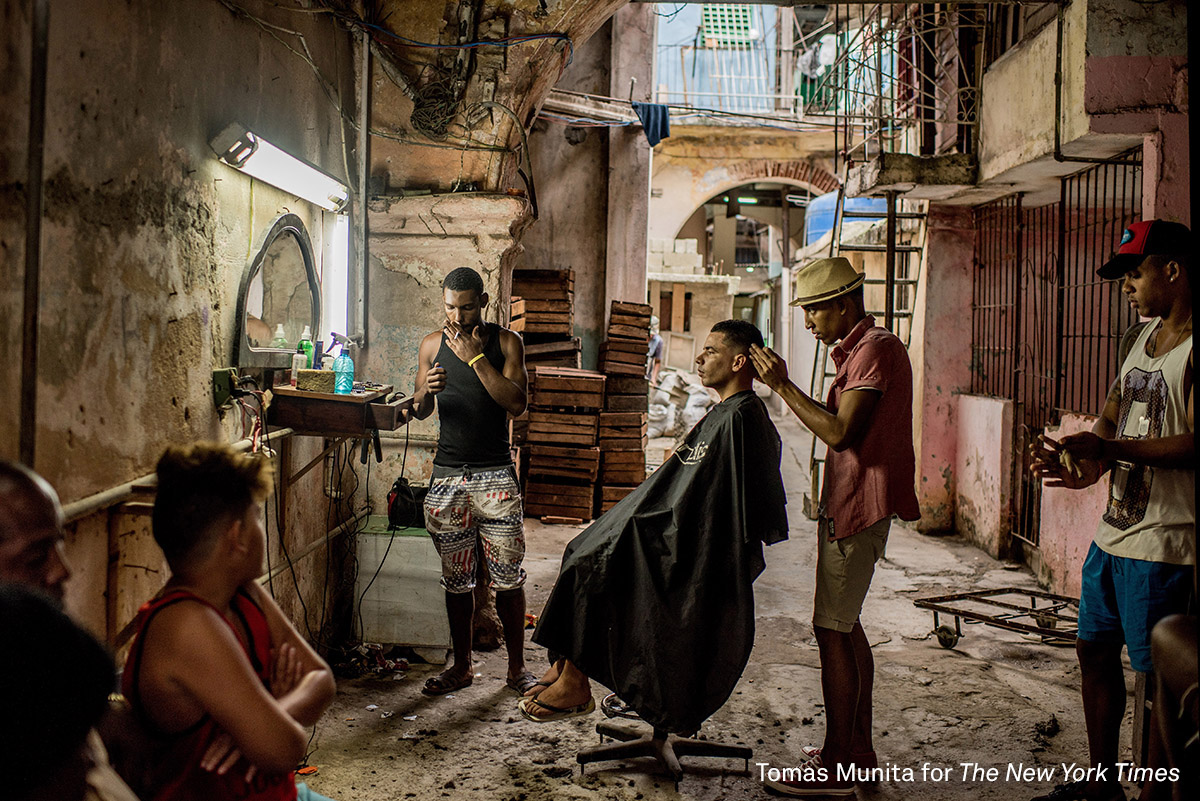 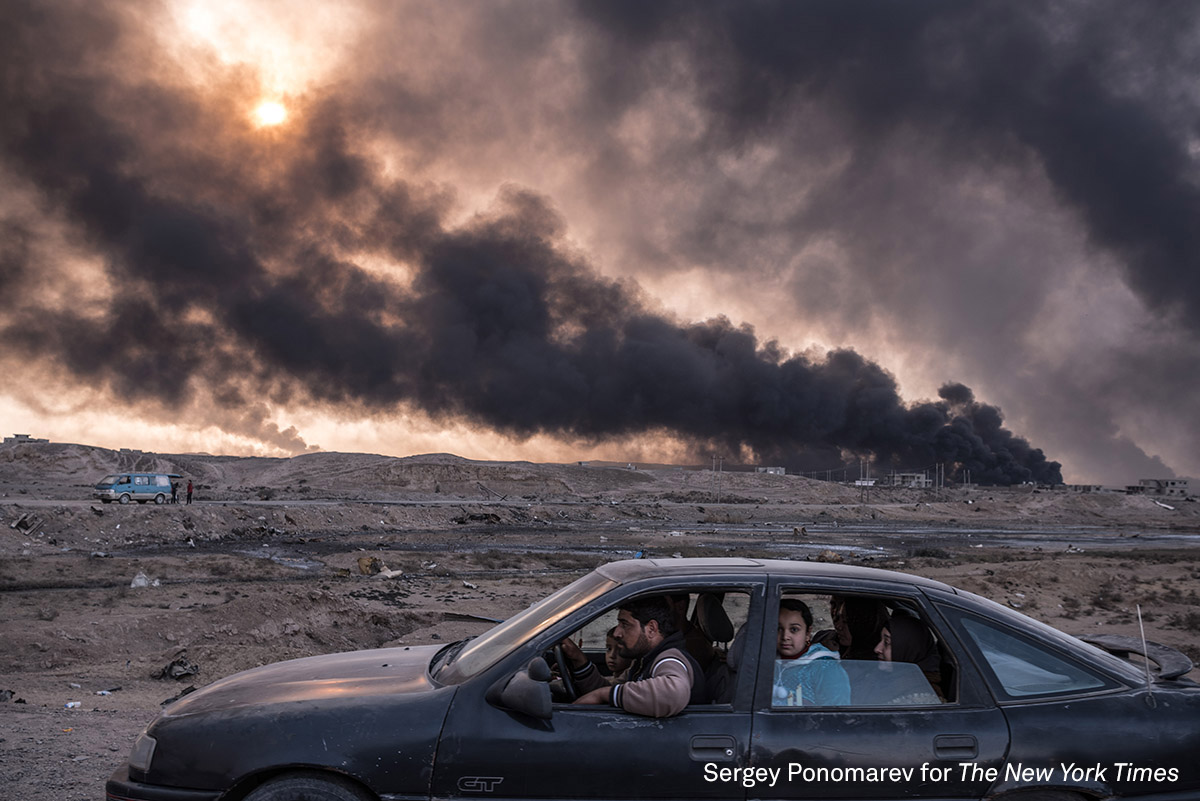 A family flees the fighting in Mosul, Iraq’s second-largest city, as oil fields burned in Qayyara, Iraq. More than two years after the Islamic State first blitzed across Iraq in 2014, Iraqi security forces are scrambling to evict the militant group from Mosul, its last major stronghold in the country. The campaign has displaced nearly 70,000 Iraqis, and may uproot hundreds of thousands more. With an escalating number of civilians caught up in the battle, some military officials are second-guessing their initial strategy. (Photo: Sergey Ponomarev, for The New York Times) 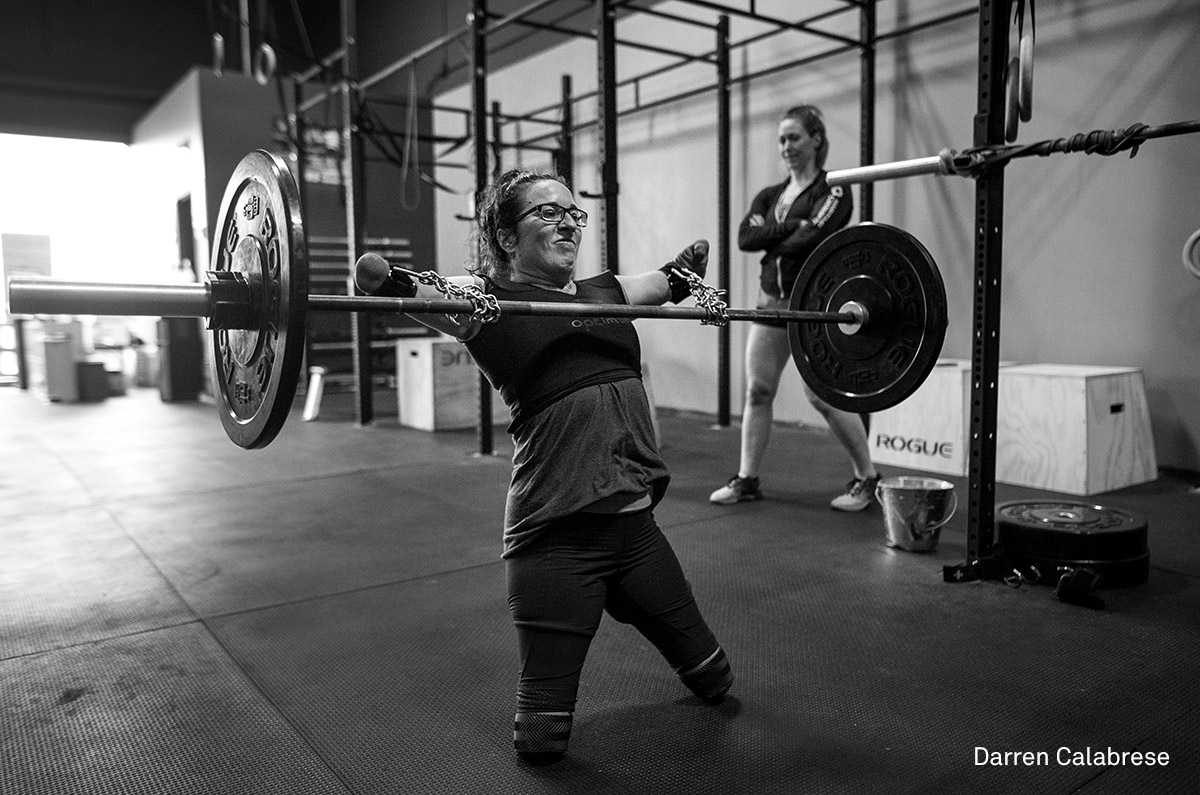 Lindsay Hilton, from Halifax, Nova Scotia, Canada, can lift 100 pounds. Lindsay was born without arms and legs. She throws all of the weight around with the help of chains from a local hardware store, straps, and Velcro. Aside from weight lifting, Lindsay holds a passion for swimming, soccer, hockey and especially rugby. When asked what motivates her and whether or not she feels accomplished, Lindsay replies, “I don't feel like I've actually done anything because I don't want to be 'good for someone without arms and legs', I want to be good.” (Photo: Darren Calabrese) 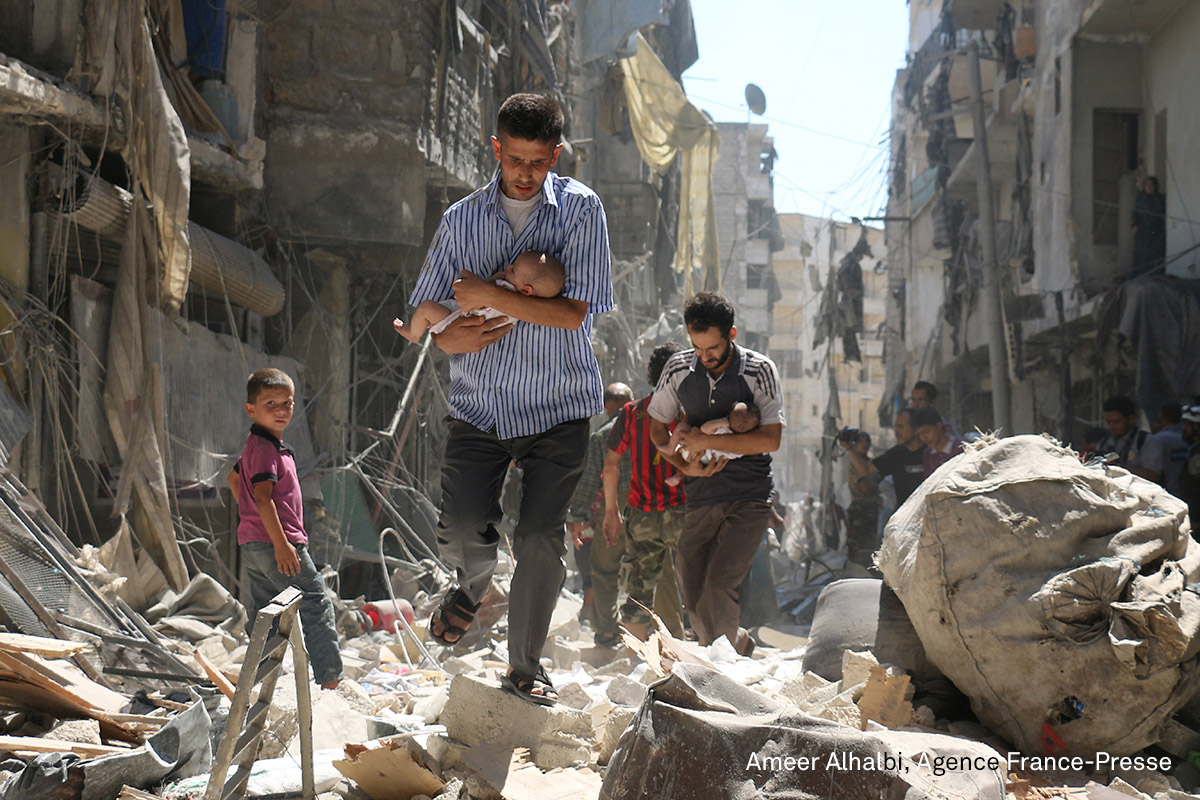 Syrian men carrying babies make their way through the rubble of destroyed buildings following a reported airstrike on the rebel-held Salihin neighborhood of Aleppo on 11 September 2016. Airstrikes have killed dozens in rebel-held parts of Syria as the opposition considers whether to join a US-Russia truce deal due to take effect on 12 September.
Since 2012, Syria’s northern city of Aleppo has been divided between rebel and regime-held districts, but a devastating regime offensive launched in mid-October saw the rebels ousted from their iconic former stronghold. The army’s victory in Aleppo was marked by heavy shelling which destroyed all established hospitals in the area and much of the city was reduced to a wasteland by air and artillery attacks. (Photo: Ameer Alhalbi, Agence France-Presse) 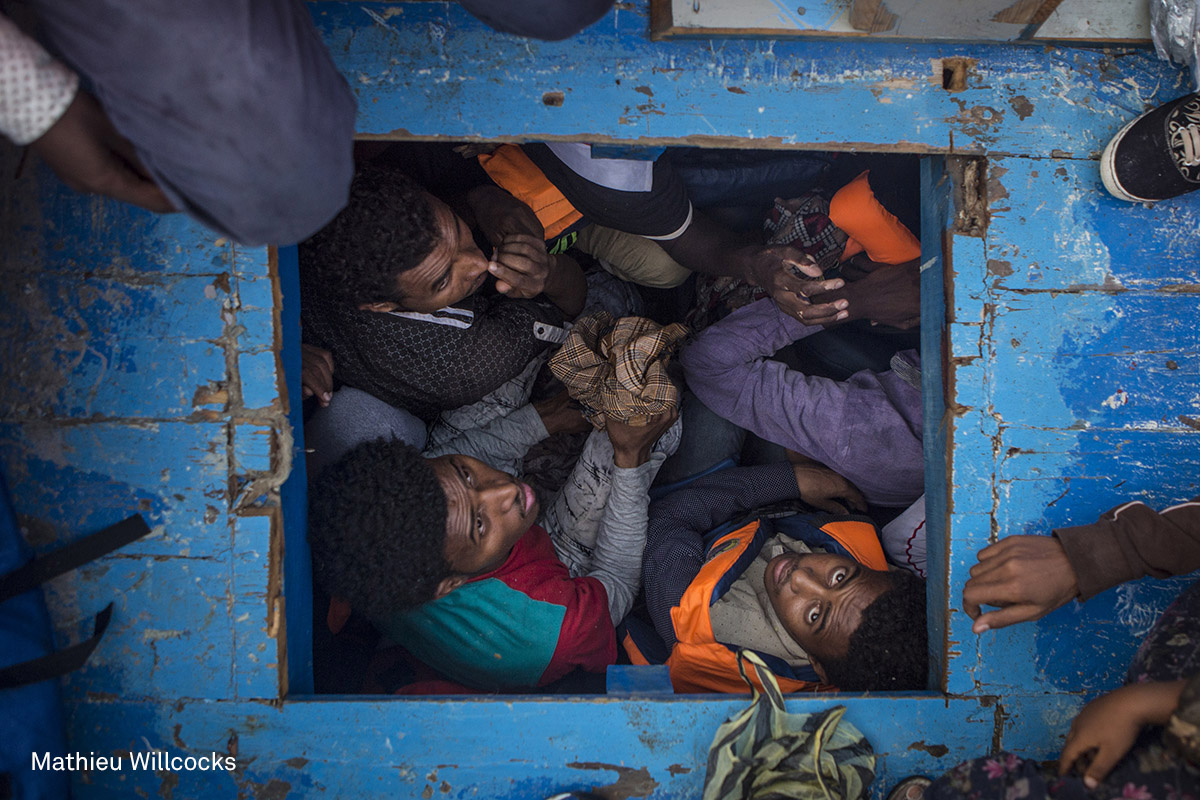 Eritrean migrants seen cramped in the hold of a large wooden boat which carried approximately 540 men, women, and children.
The central Mediterranean migration route, between the coasts of Libya and Italy, remains busy. According to reports by the UNHCR, 5,000 people died while attempting to cross the Mediterranean in 2016. NGOs and charities such as Migrant Offshore Aid Station (MOAS) continue their efforts to patrol the patch of sea north of the Libyan coast, in the hope of rescuing refugees before the potential of drowning. The rescue team on board the MOAS’ Responder are there to mitigate loss of life at sea. Operating like a sea-born ambulance, they rush to assist and rescue refugee vessels in distress, provide medical assistance, and bring the refugees safely to Italy. (Photo: Mathieu Willcocks)