These images from the first half of the 20th century show Canada's oldest national park when it was still young
By Harry Wilson and Erika Reinhardt*
January 16, 2017

Today, Banff is about as modern as a Canadian national park can be. But what was it like for visitors in the first half of the 20th century?

To coincide with the parks theme of its January/February issue (coming to a newsstand near you Feb. 6), Canadian Geographic has gathered a collection of photos from Library and Archives Canada that showcase Banff National Park like you may have never seen it before. 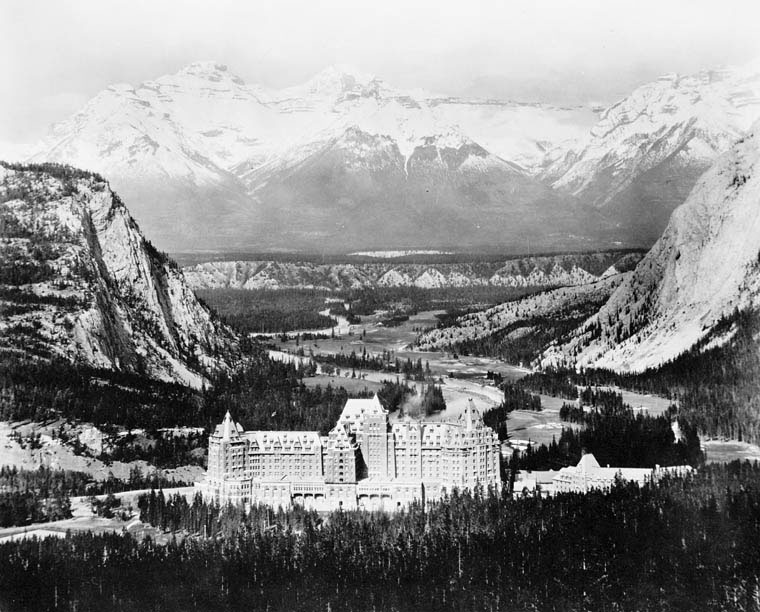 “Since we can't export the scenery,” said William Cornelius Van Horne, the general manager of the Canadian Pacific Railway in the early 1880s, “we'll have to import the tourists." And so they did, with many drawn by the Banff Springs Hotel, which opened on June 1, 1888. This photo shows the hotel as it appeared circa 1920. (Photo: Photothèque (Canadian Government Motion Picture Bureau)/PA-148556) 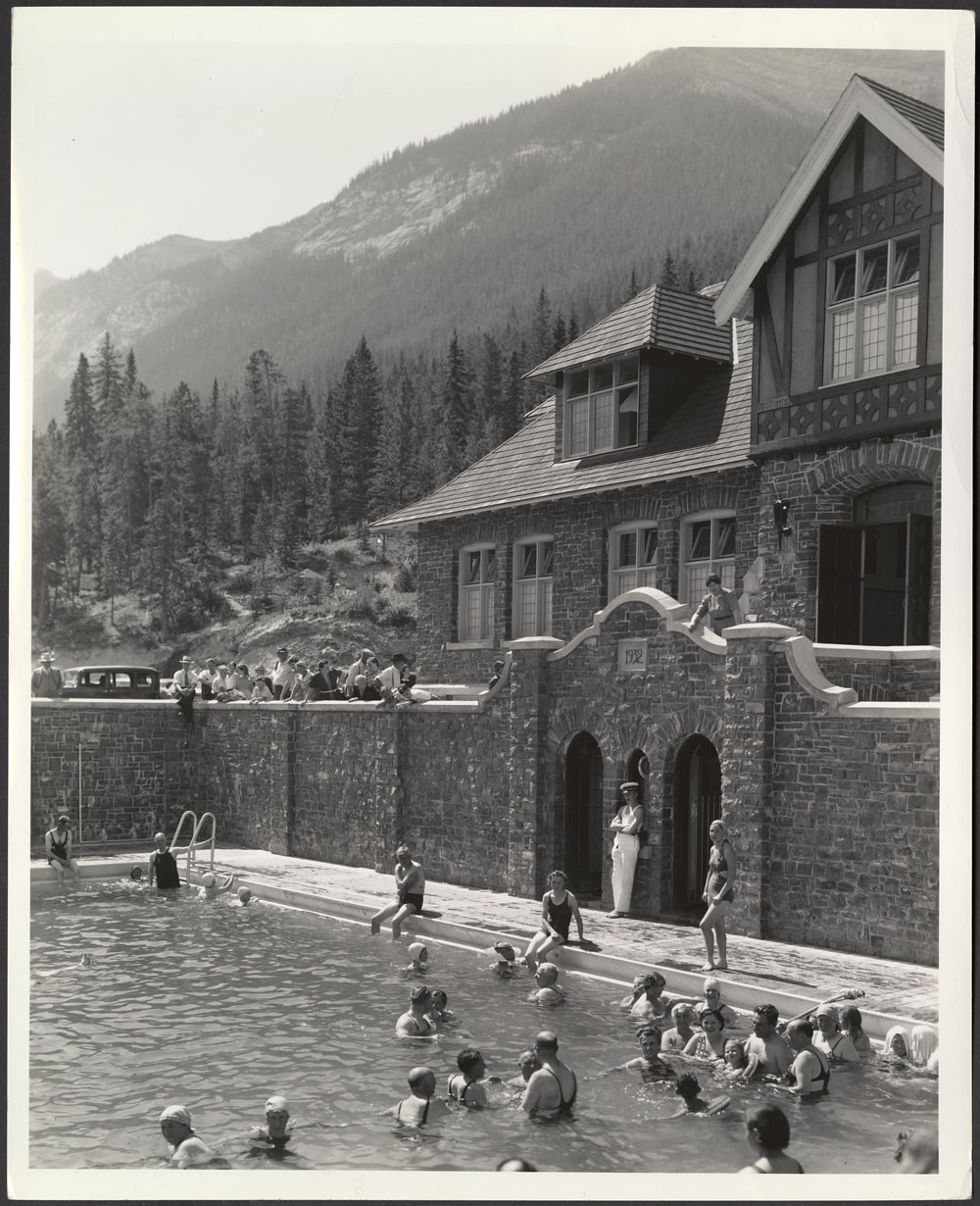 An undated photo of bathers in the waters of the park’s Upper Hot Springs. (Photo: Government of Canada) 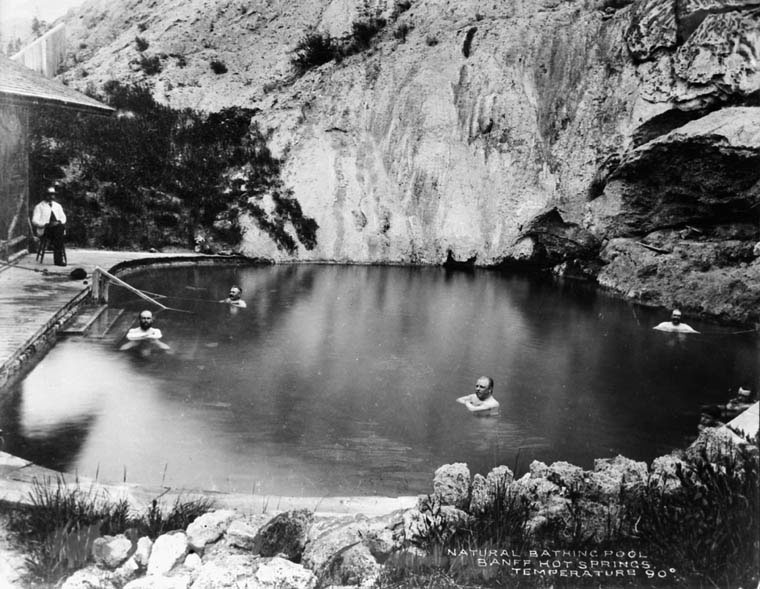 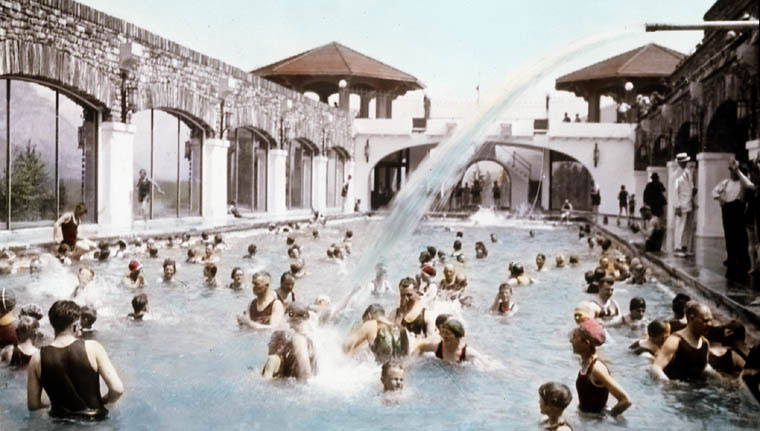 This coloured glass lantern slide from the 1920s was probably used by the Department of the Interior as an educational photograph. (Photo: Swimming Pool, Banff National Park. Library and Archives Canada / PA-179859) 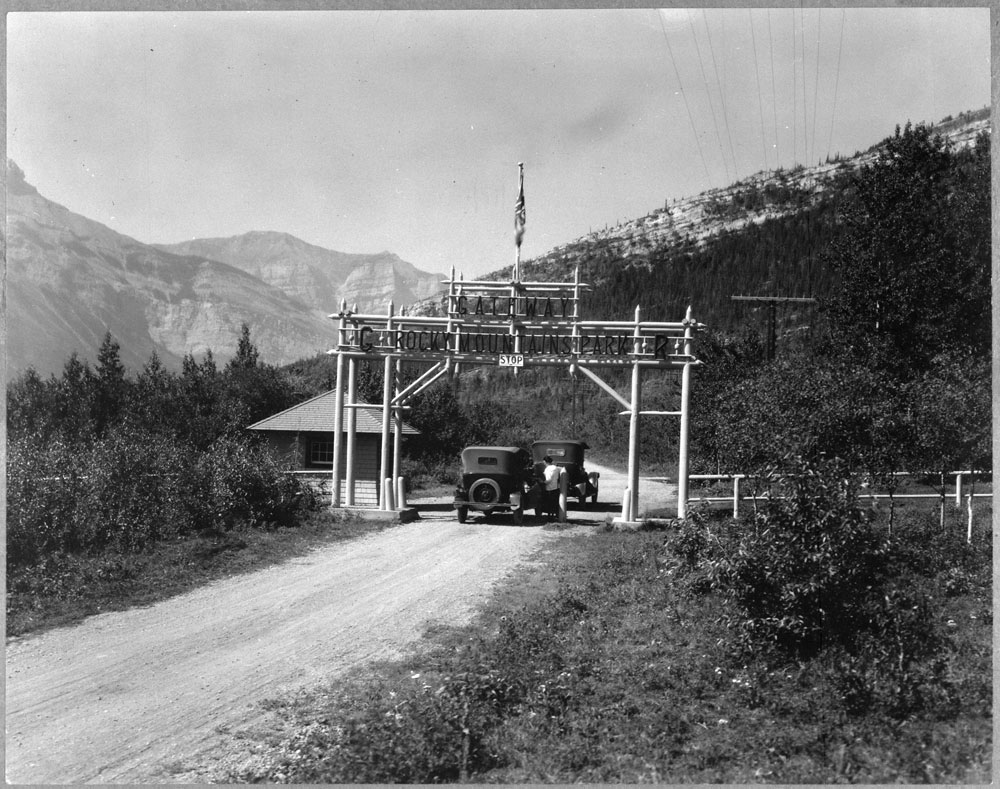 Cars in 1922 at the Exshaw entrance of what was then known as Rocky Mountains Park. Banff National Park became the official name in 1930. (Photo: National Parks Branch / Library and Archives Canada / PA-058074) 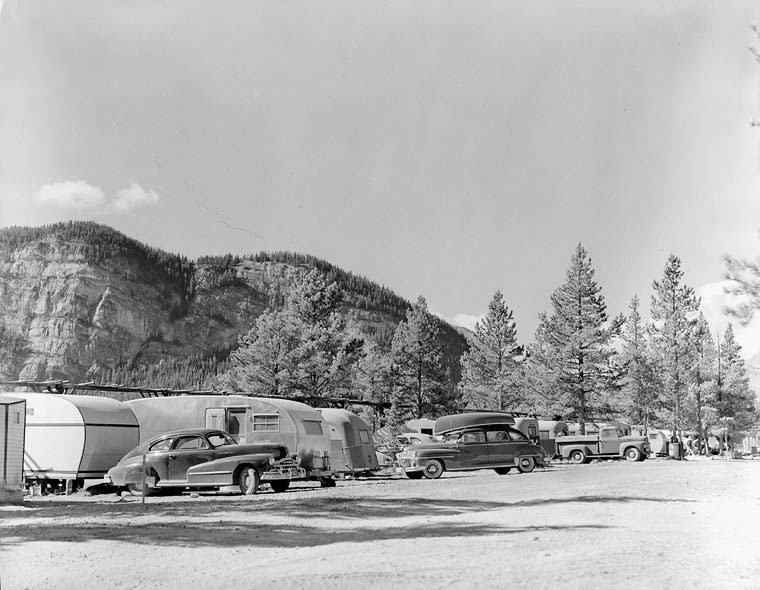 They may be the poor older cousin of the gleaming motorized behemoths you see in Banff today, but the presence of the classic Airstream-style trailers seen here indicate that car camping was thriving in the park as far back as 1948, the year this image was taken. (Photo: Frank Royal/National Film Board of Canada/Library and Archives Canada/PA-176683) 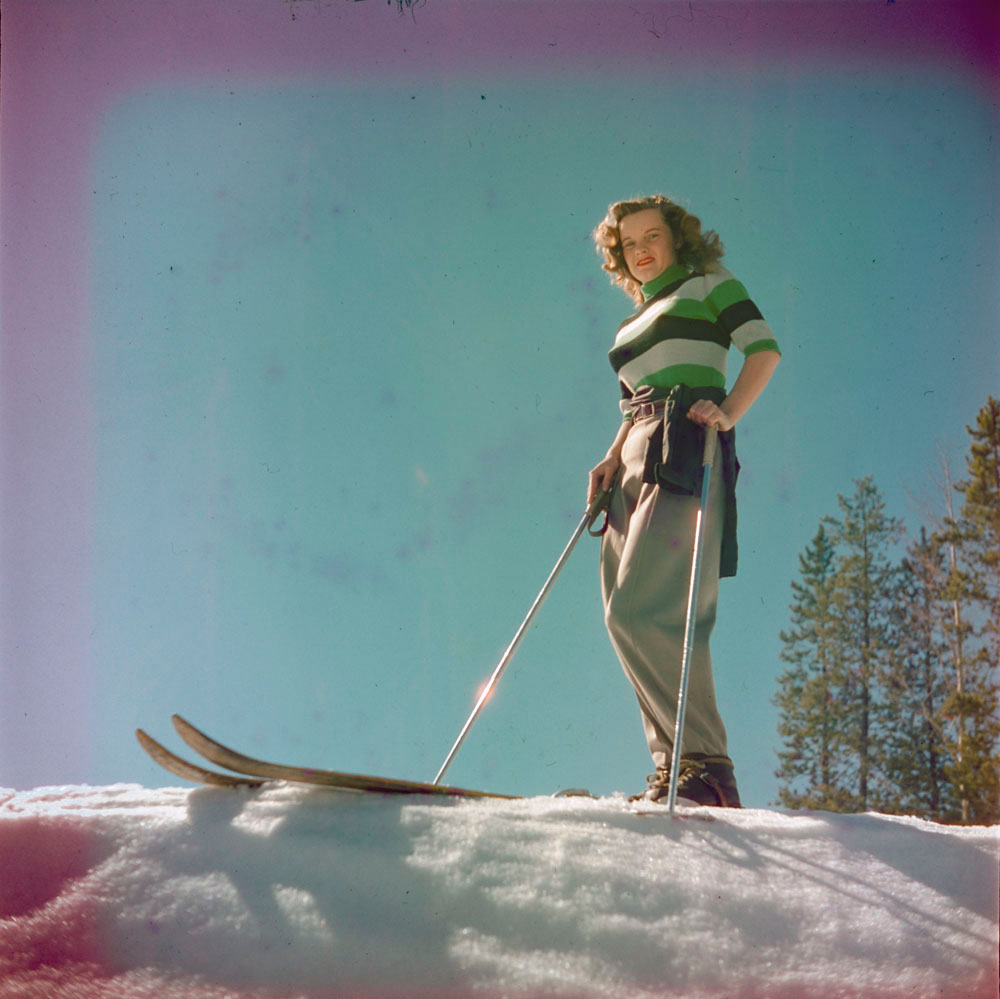 A woman named Shirley Cain poses at Sunshine Ski Lodge in 1951. Cain featured in a number of these now vintage-style images that were taken by photographer Bill Gibbons, who had moved to Canada from the United Kingdom in 1941 and settled in Banff with his wife after the war. According to the Archives Society of Alberta, Gibbons “made extensive use of models, many of who were young women employed by his Banff store,” British Photographic Laboratories. (Photo: Bibliothèque et Archives Canada; Gouvernement du Canada) 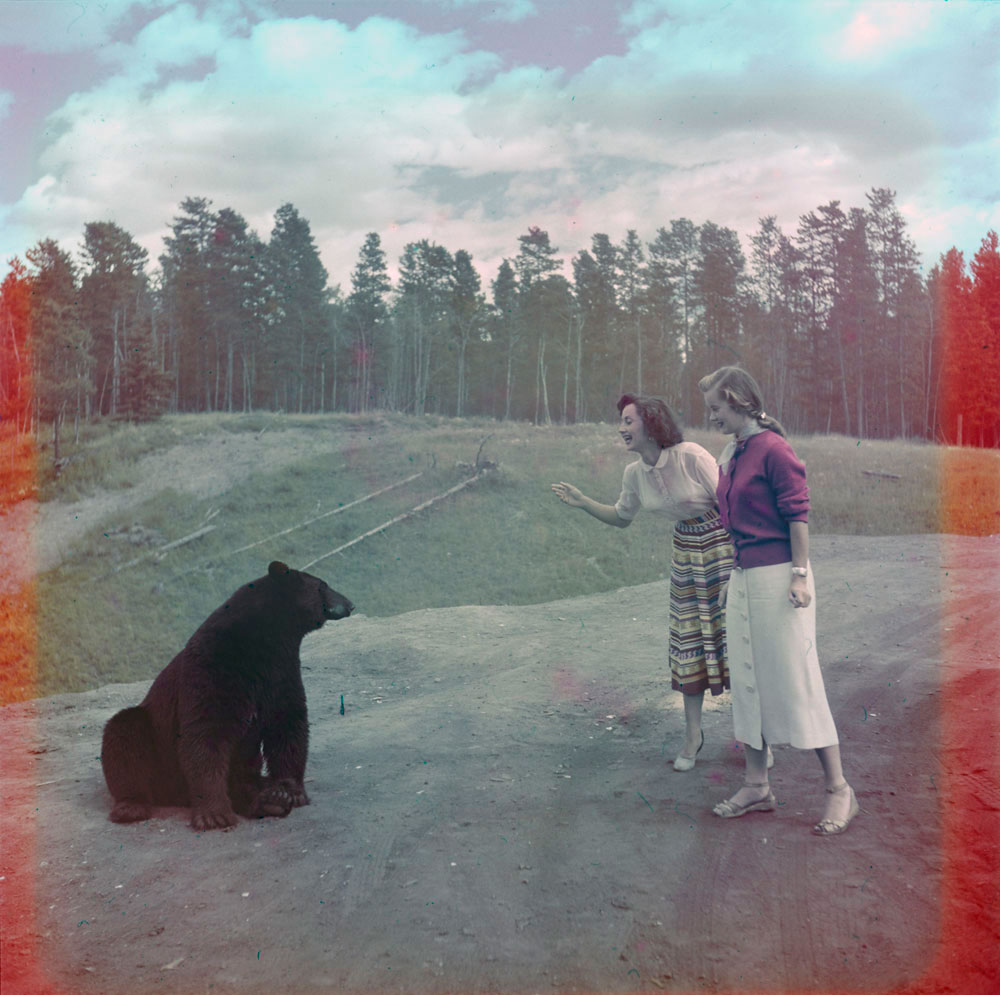 Yes, visitors to Banff were doing what they shouldn’t be doing in a national park (or anywhere else, for that matter) in 1951, the year Bill Gibbons captured this shot of two women feeding a black bear at Nuisance Grands, Banff National Park. (Photo: Library and Archives Canada; Government of Canada, e010948979-v8) 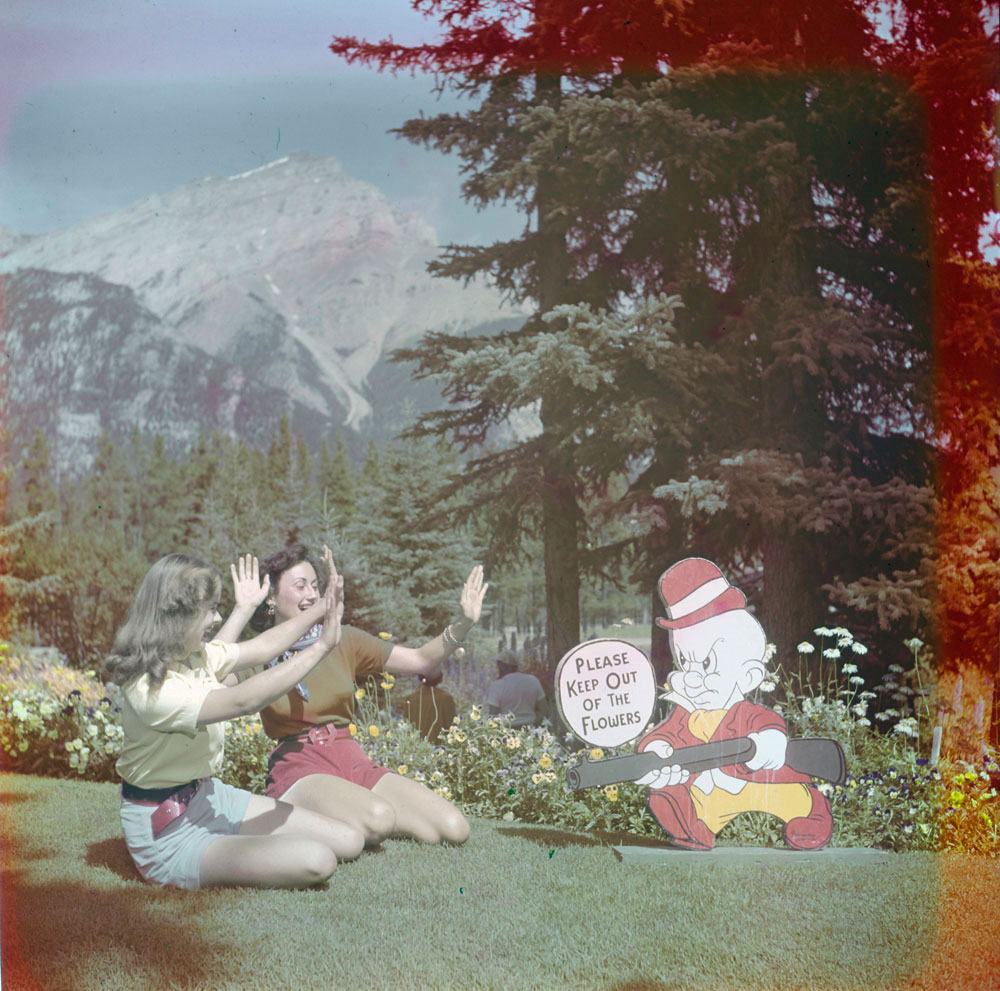 Elmer Fudd was well known by the time Bill Gibbons took this shot of two women recoiling from a sign in the character’s likeness in 1951, on the lawn of the Administration Gardens, Banff National Park. (Photo: Library and Archives Canada; Government of Canada, e010948978-v8) 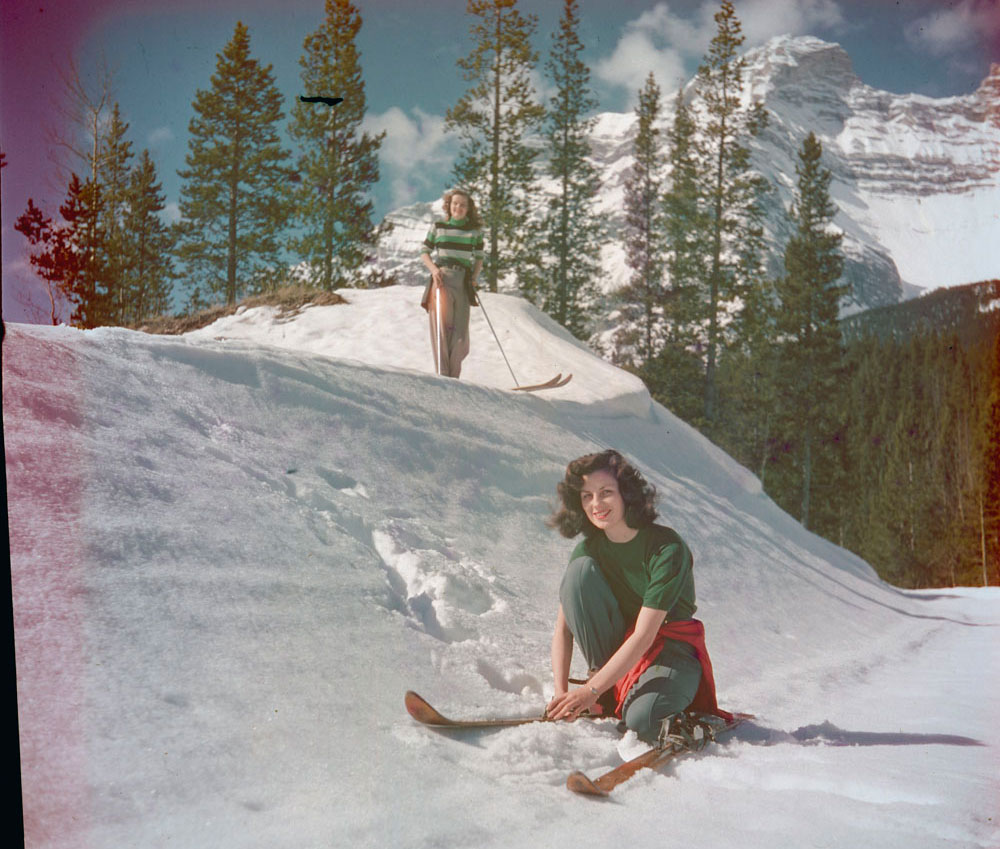