10 facts about Elections Canada on its 100th anniversary

Ballots boxes used to be made of metal and voter registrations lists used to be tacked to telephone poles — here are 10 things you probably didn't know about the federal election in Canada.
By Angelica Haggert
June 30, 2020

In March of 1920, after a series of controversial decisions about how federal representatives were elected during the First World War, a special committee made up of both Conservatives and Liberals was put together to come up with a way to run federal elections moving forward. The Office of the Chief Electoral Officer, commonly known as Elections Canada, was officially created on July 1, 1920.

Here are 10 things you may not know about federal elections in Canada:

There have only been seven chief electoral officers

When the office was first created, the chief electoral officer was appointed for life. Now Parliament appoints the position for a 10-year term. The first person to hold the position was Oliver Mowat Biggar, who was tasked with organizing the vote for an electorate that had just doubled in size — because women* were allowed to vote.

The Chief Electoral Officer is the only Canadian citizen of voting age who is not allowed to vote in federal elections.

*White women’s right to vote was recognized by the Dominion Elections Act of 1920, but it would be another 40 years before all women in Canada, including Indigenous women and racial minorities, were able to cast a ballot. See a timeline of women’s suffrage in Canada.

Enumerating was a big door-to-door task

For most of the last 100 years, the list of eligible and registered voters was compiled by volunteers going door-to-door across the country every time an election was called. If you’re old enough, you might also remember registered voter lists being tacked to community bulletin boards or telephone poles! You won’t find that happening anymore, after privacy concerns won out. Instead, Elections Canada sends a personalized information card to every registered elector. 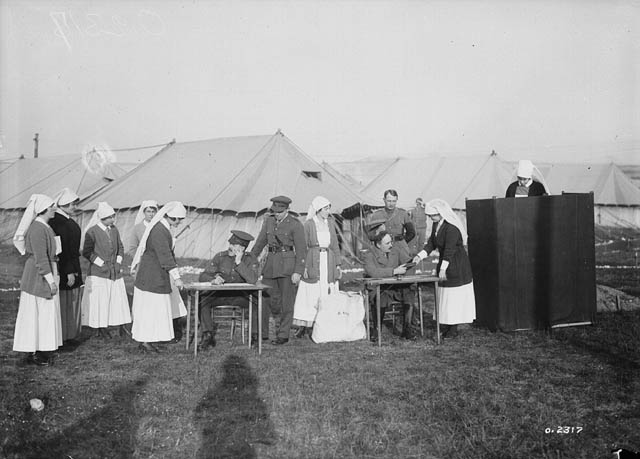 About 50 per cent of the population was eligible to vote in the 1921 election. Canadian men and women could vote if they were 21 or older. This changed in 1970, when the voting age was lowered to 18, after Pierre Trudeau took office — due in part to active youth campaigning. These youth, mobilized by their success, lobby Parliament to lower the voting age. There was little debate in passing the bill.

Today, about 75 per cent of Canada's population can vote in federal elections. The remaining 25 percent do not meet the age or citizenship requirements.

Some jobs, backgrounds and religions were excluded from voting

Originally, people with certain jobs, such as judges and government workers, were excluded from voting. So were people from certain racial backgrounds, such as South Asian Canadians. First Nations people could only vote if they gave up their Indian status under the law. In 1948, racial and religious barriers were removed. Mennonites and Doukhobors were both religions prevented from voting in early federal elections, because most members of both these groups refused to perform military service for religious reasons.

In 1992, polling stations were required to be accessible to those in wheelchairs or with mobility devices.

In 2015, Elections Canada administered Canada's longest federal election, which lasted for 78 days. Elections law requires a minimum campaign of 37 days. It does not impose a maximum length. Then-Prime Minister Stephen Harper chose when the campaign began, essentially choosing to make the 2015 election the longest traditional campaign in Canadian history.

"Everybody knows the election date and the campaigns of the other parties, as near as I can tell, have already begun,” Harper told CBC at the time, about why he began the election so early. "I feel very strongly...that those campaigns need to be conducted under the rules of the law. That the money come from the parties themselves, not from government resources, parliamentary resources or taxpayer resources."

During a typical 37-day election period, each party can spend a maximum of $25 million. For each additional day, that limit is increased by 1/37th, or an extra $675,000, meaning an 11-week campaign would allow parties to spend more than $50 million. 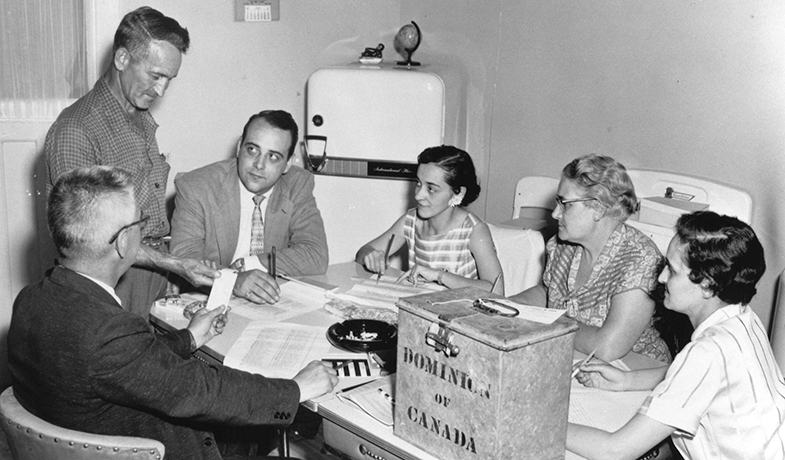 Six people seated at a table with a ballot box in 1957. (Photo: Library and Archives Canada)

Elections must be on Mondays

Elections Canada is required by law to hold federal elections on a Monday. This became law in 1929, after the first Chief Electoral Officer, Biggar, pointed out that with the election being held on a Thursday, the advance voting provisions had been of little use to commercial travellers: they were already out on the road when the advance polls opened for the three days preceding the election. Elections on Mondays mean advance polls are available on the weekend.

If the Monday is a federal or provincial holiday, then the election is moved to a Tuesday. Since May 2007, election day must be the third Monday of October in the fourth calendar year following the previous general election.

There have been two national referendums

In 1942, Canada held its first-ever national referendum, on whether military service should be compulsory during the Second World War. Based on the result, the government adopted conscription, but with an adjustment that those conscripted would not be sent overseas to active fighting.

Elections Canada also conducted the 1992 national referendum on the Charlottetown Accord, a set of proposed changes to Canada’s constitution. It was defeated. Topics addressed in the accord included the division of powers between federal and provincial jurisdiction, federal institutional reform and the Aboriginal right to self-governance.

Elections Canada workers in the 1960s. (Photo: National Film Board)

Ballot boxes used to be made of metal

When Parliament introduced the secret ballot in 1874, the first ballot boxes were wooden and had a lock and key. They later became metal and, between 1988 and 1992, these boxes were gradually replaced with recyclable cardboard, eliminating the need to store them between elections.

Future voters can register at age 14

The Register of Future Electors was created on April 1, 2019. The Register contains information on youth aged 14 to 17 who have signed up. Upon turning 18, eligible individuals will be automatically added to the National Register of Electors and their information made available to political parties.

Think you know it all now? Try our new quiz!