The turtles we keep as pets don’t belong in the wild
By Madigan Cotterill
July 19, 2020

Being a turtle these days is tough. With the constant threat of habitat loss, impacts from human development, and predators ... It’s a daily fight for survival for native turtles. In Ontario, seven of the eight native turtle species are considered to be at risk by the federal government.

So the last thing our turtles need is another threat — like an invader — but here one is.

The red-eared slider is the most common non-native species of turtle in Ontario, and they are being increasingly found in wetlands and waterways, says the Ontario Turtle Conservation Centre (OTCC). Originally from central and south-central areas of the United States, the red-eared slider is now a common sighting throughout Ontario, especially in the Greater Toronto Area. So how did they get here? Turtle dumping.

“The way these turtles get into the wild is people irresponsibly letting go of their pets by releasing them into the wild,” says Donnell Gasbarrini, Adopt-A-Pond coordinator at the Toronto Zoo. “They compete with our native species for food and resources like basking sites and suitable habitats. They are also known to be more aggressive and larger than most of our native species.”.

The Adopt-A-Pond program began in the early 1990s and their mission is to preserve and conserve Ontario’s reptile and amphibian species. Part of the program includes the Turtle Tally project, a citizen science project where individuals report turtle sightings. Based on the information provided, Gasbarrini says that red-eared sliders tend to be more common in urban areas.

As the most common species of turtle to have as a pet, red-eared sliders are often purchased when they are about the size of a Canadian toonie. Not all owners are aware of the commitment needed to properly take care of a turtle, or mindful of how large they can be. In captivity, red-eared sliders can live up to 40 years and reach 12 inches in length.

“It’s a super cute turtle, an adorable little thing,” says conservation biologist Marc Dupuis-Desormeaux. “It’s small when you get it, but then when it grows to its full size it becomes too big for whatever little aquarium you had it in. Then you feel bad and release it into the wild.”

Working closely with the Toronto and Region Conservation Authority, Dupuis-Desormeaux studies turtle demographics in urban and man-made wetlands. He says that people have the well-intentioned idea to release their pet turtles back into the wild thinking that is what is best for the animal, but actually many do not survive.

Areas in Toronto such as the Don Valley Brick Works and Tommy Thompson Park are both places where red-eared sliders are frequently dumped.

Pet turtles end up bigger than owners bargained for

“It’s definitely become quite a large problem,” Gasbarrini says. “People don’t really understand everything it takes to care for them for their whole lives.”

A common myth people believe is that turtles will grow to fit the size of the container or tank they are kept in.

“That’s just not true,” says Gasbarrini. “They will continue to grow regardless of what type of enclosure they are in.”

When the turtle becomes too big, or the owner no longer wants to keep it, individuals seek out ways to get rid of their pet. Surrendering a turtle properly, however, can be difficult.

To help relocate, rehabilitate and rescue pet turtles, the organization, Little RES Q (red-eared slider quarters) was founded to help prevent animals from being released into the wild. Located in Southern Ontario, Little RES Q has helped to match almost 2,000 turtles with new homes. Founder and shelter manager, Marc Ouellette says that this is still not enough.

“Right now, surrendering requests are more than double the adoptions by far,” he says. “We have had a waiting list for at least half of the time we have been around.”

With the capacity for about 250 turtles, the shelter receives two to three calls a day from owners wanting to surrender their pets.

“It does weigh on me,” Ouellette says. “I know what people are doing because they don’t want to wait. I can only do so much.”

Now found in every state in the U.S., all provinces in Canada and 64 countries, Dupuis-Desormeaux says that red-eared sliders are being released constantly into the wild.

“You can even trace their popularity to when The Teenage Mutant Ninja Turtles movie came out,” he says. “It’s all because of the pet trade.” 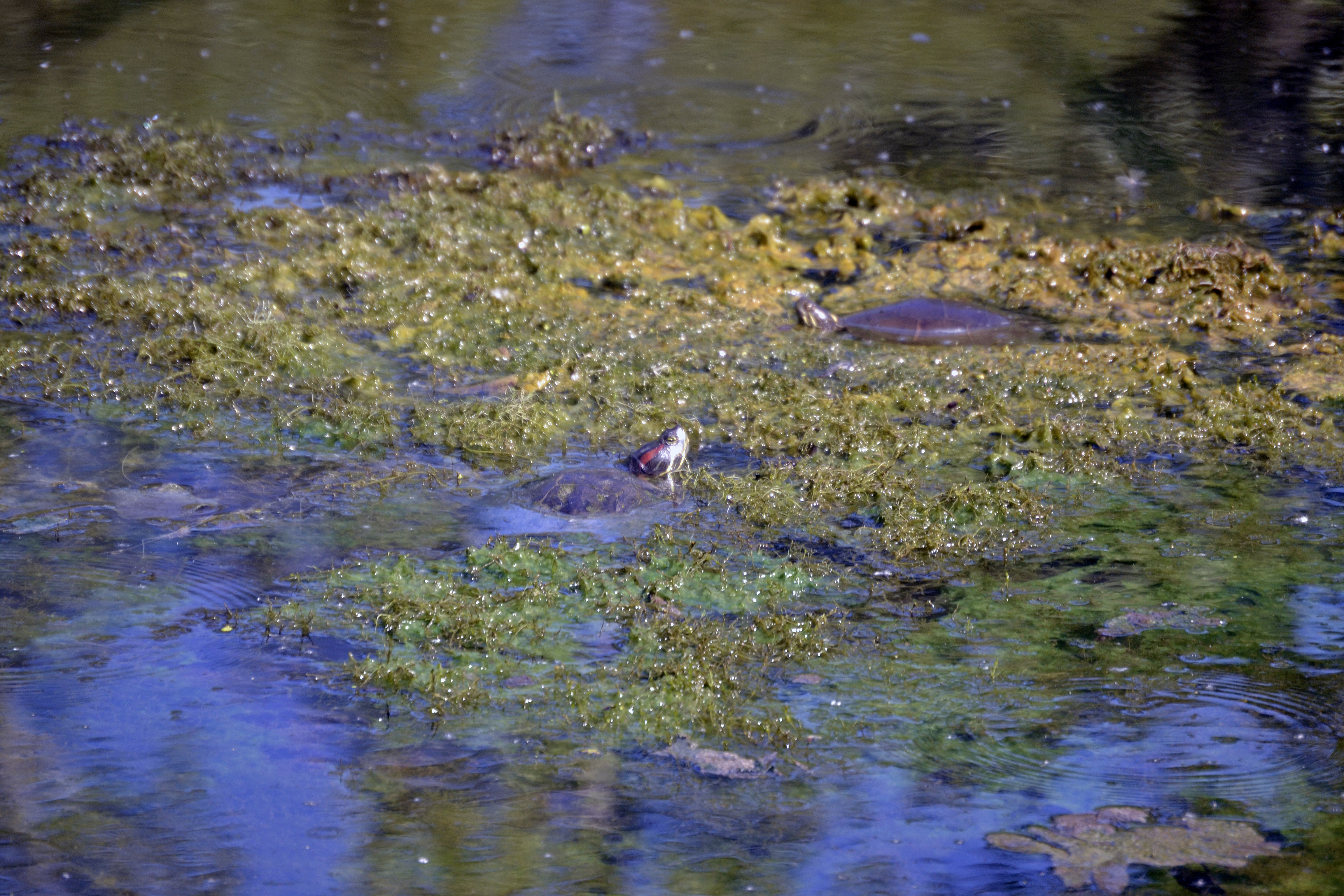 Red-eared slider turtles, commonly owned as pets, often end up dumped in the wild when owners realize how big they get.
(Photo: Madigan Cotterill/Can Geo)

Having trapped more than 1,000 turtles, Dupuis-Desormeaux says that five to six per cent are red-eared sliders. At this point, Dupuis-Desormeaux says that there are examples of red-eared sliders successfully mating and having nests in Ontario, but we shouldn’t be worried about them reproducing — what we should be worried about is the spread of diseases.

Kristen Janke, a veterinarian at the OTCC says there has been at least one confirmed case of herpes virus in a red-eared slider brought into the centre.

“Whenever we have a new species coming into an area the question is always, ‘What are you bringing with you?’” says Janke. “Usually the answer is disease and parasite.”

With the mission to protect and conserve Ontario’s native turtles and their habitat, the OTCC says that the issue of dumping red-eared sliders is definitely problematic.

“We know they are invading the natural habitat here in Ontario because we are actually seeing them being brought into the centre after being hit by cars or injuries out in the wild,” says Janke. “Because they are adults, we know that they have either been released or are successfully living years out there, like our native turtles.”

Playing an important role in Ontario’s ecosystem in terms of biomass contribution, mineral recycling, and feed distribution, Dupuis-Desormeaux says that maybe the introduction of red-eared sliders can be a good thing.

“Given where we are in Ontario and how our native species are already under siege by so many things, there is an argument to be made that having another turtle, just for the ecosystem services that it provides is not a bad thing,” says Dupuis-Desormeaux.

Increasing the number of turtles in Ontario’s ecosystem is something that Dupuis-Desormeaux is always working towards. He says that more native turtles would be ideal, but because of how much the ecosystem has changed the question is whether or not we should accept this new turtle. “If the red-eared slider can adapt to non-native environments, I wouldn’t be so quick to judge if it is a bad thing.”

The perspective taken by the OTCC, however, is that the goal is to maintain healthy populations of the native turtles we already have.

“By introducing a new one (turtle), we are just adding more threat that could reduce our native populations even more than we already have,” says Janke. She says that the OTCC is making a real difference for native species, and attention needs to be put on reducing the threats native turtles already face, not introducing new ones.

Red-eared sliders may be seen as invaders, but the truth is that they are not the ones to blame.

“All of this is just a result of human action,” says Gasbarrini. “It is not the turtle's fault, it’s the people.