Trudeau was recognized for his passionate commitment to the environment, including his government’s leadership on climate change, its historic investments in Indigenous-led nature conservation and Indigenous Guardians programs, and its action on ocean conservation and protection, including in reducing plastic waste.

“I share this with Indigenous communities, young Canadians, activists and all Canadians who are helping to protect our land and oceans and who are partnering with us in the fight against climate change,” said Trudeau in a video message shared with the Society’s College of Fellows.

Trudeau, an outdoor enthusiast, has connected with the Society’s Westaway Explorer-in-Residence Adam Shoalts, personally greeted and congratulated Canadian Geographic Challenge winning students, and joined the late Alex Trebek at the official  2019 opening of the Society’s headquarters at 50 Sussex Drive.

“Prime Minister Trudeau has been a strong advocate for the environment, and for geography. He has a great deal of backcountry experience, and as much as anybody understands what is precious about Canada and our incredible natural inheritance,” said John Geiger, RCGS CEO.

Jean Trebek, wife of Mr. Trebek (who served as the Society’s Honorary President from May 2016 until his passing) and president of the Trebek Family Foundation, has also been recognized with an Honorary Fellowship. Jean has attended numerous Society functions and has shared Alex’s commitment to support education, the arts, and health and human services around the world. The foundation support has included critical programs of The Royal Canadian Geographical Society.

A keen hiker and traveler, Jean Trebek co-founded the lifestyle brand website insidewink.com in 2019, which embodies her philosophy: It “strives to encourage kinder living and to see the world’s perpetual generosity.”

Jean Trebek, president of the Trebek Family Foundation and wife of the late Alex Trebek, at the grand opening of the Royal Canadian Geogeographical Society's headquarters in Ottawa in May 2019. (Photo: Ben Powless/Can Geo)

“Jean has been, and continues to be, a gracious ally of the Society and our continued efforts to acknowledge and honour the Trebek legacy and, in particular, its support of geographic education,” said Geiger, pointing to the Society’s Trebek Initiative, a new joint program with the National Geographic Society to support emerging explorers in Canada, as well as the Alex Trebek Medal for Geographic Literacy program, which recognizes outstanding educators.

Meanwhile, as the world grapples with a historic health crisis, the incredible contributions of healthcare professionals, including members of the Canadian Armed Forces, have been increasingly recognized.

As Commander of the Canadian Armed Forces Health Services, Rear-Admiral Rebecca Patterson has played a leadership role in the Services’ aid of seniors living in long-term care facilities during the COVID-19 pandemic. Patterson was also named the CAF Defence Champion for Women in 2018, and continues to serve in that capacity.

“Over the past 32 years, my travels across Canada and many countries throughout the world as a member of the military provided experiences that challenged the limitations I thought existed for me,” says Patterson. “I could never have imagined that these opportunities would offer countless occasions to realize my full potential. I am delighted that my service to Canada has been connected to the RCGS mission of ‘making Canada better known to Canadians and to the world.’ This means so much to me.” 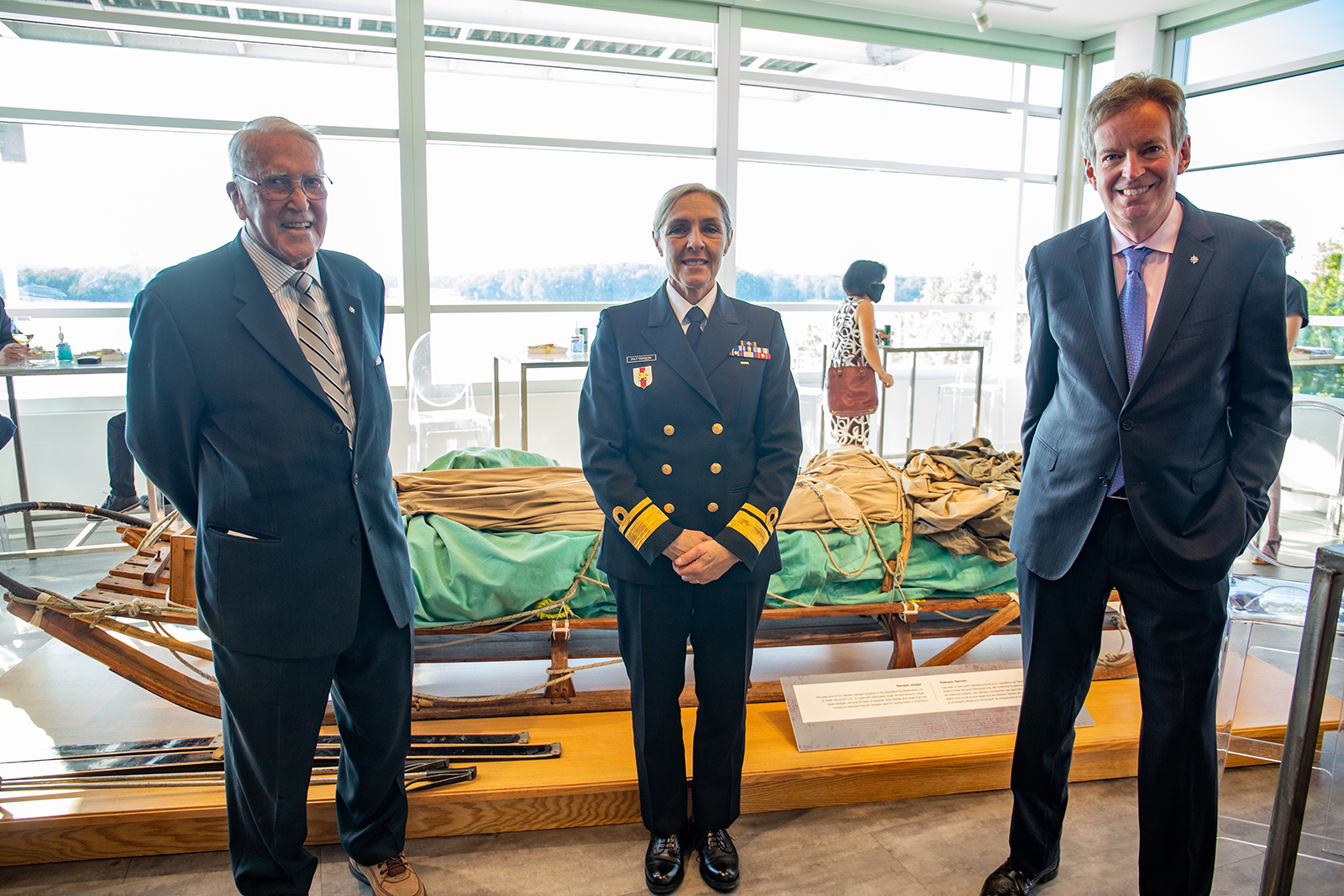 Geiger added that “we are all deeply indebted to healthcare professionals and indeed to Armed Forces personnel for their heroic efforts during the current pandemic. Admiral Patterson has been an exemplar of service throughout her distinguished career, and never more than during the challenges of the past year.”

Society President Gavin Fitch congratulated the three recipients on behalf of the Society’s Board of Governors and welcomed them into the fellowship. “Each in her or his own way has helped to advance the Society’s vital mission and ultimately its ability to help chart Canada’s future.”