Testing the future of tidal energy in Nova Scotia

In the Bay of Fundy, technicians are putting a groundbreaking new tidal technology through its paces
By Alexandra Pope
August 29, 2019

It’s a bright, windy May day in Nova Scotia as the freight ferry Kipawo pulls out of Westport Harbour and, fighting the powerful ebb tide, makes its way into the Grand Passage channel. Kipawo cuts through this narrow strip of fast-moving water between Brier and Long islands at the extreme western tip of Nova Scotia’s Digby Neck peninsula toward Sustainable Marine Energy’s new tidal energy technology, PLAT-I.

A 32-metre trimaran bearing four submarine turbines on hydraulic lifts, PLAT-I’s steel hull and outriggers are painted green and white and the platform looks at home among the aquaculture cages and wooden piers scattered throughout the passage. Its arrival the previous fall caused a stir in Westport, a tight-knit community of about 200. Until now, fishing and tourism, the latter mostly geared toward whale watching in the nearby Bay of Fundy, were Westport’s main industries. If PLAT-I works the way SME anticipates it will — and clears a raft of provincial and federal regulatory hurdles — it could be a game-changer for the renewable energy industry and similar isolated coastal communities hoping to harness the power of their local tides.

As Kipawo pulls alongside PLAT-I, Jason Clarkson, SME’s project manager, is greeted with good news: the platform continues to generate power, as it has done almost every day for two months. Inside the control room, which thrums with the vibrations of the spinning turbines below and is a good 20 C warmer than the crisp ocean air outside, Clarkson and a team of technicians gather around the console and watch as the wattmeter ticks upward, showing the platform’s current output. Outside, water is flowing out of the passage at more than two metres per second, creating the illusion that the platform is drifting even though it’s securely moored in place. Stand on an outrigger and look straight down and you can see the turbines churning in the clear, aquamarine water.

Right now, the power is feeding into a heat exchanger on the platform, but SME’s goal is to see PLAT-I connected to the provincial grid, where it will contribute enough energy to power up to 3,000 homes. 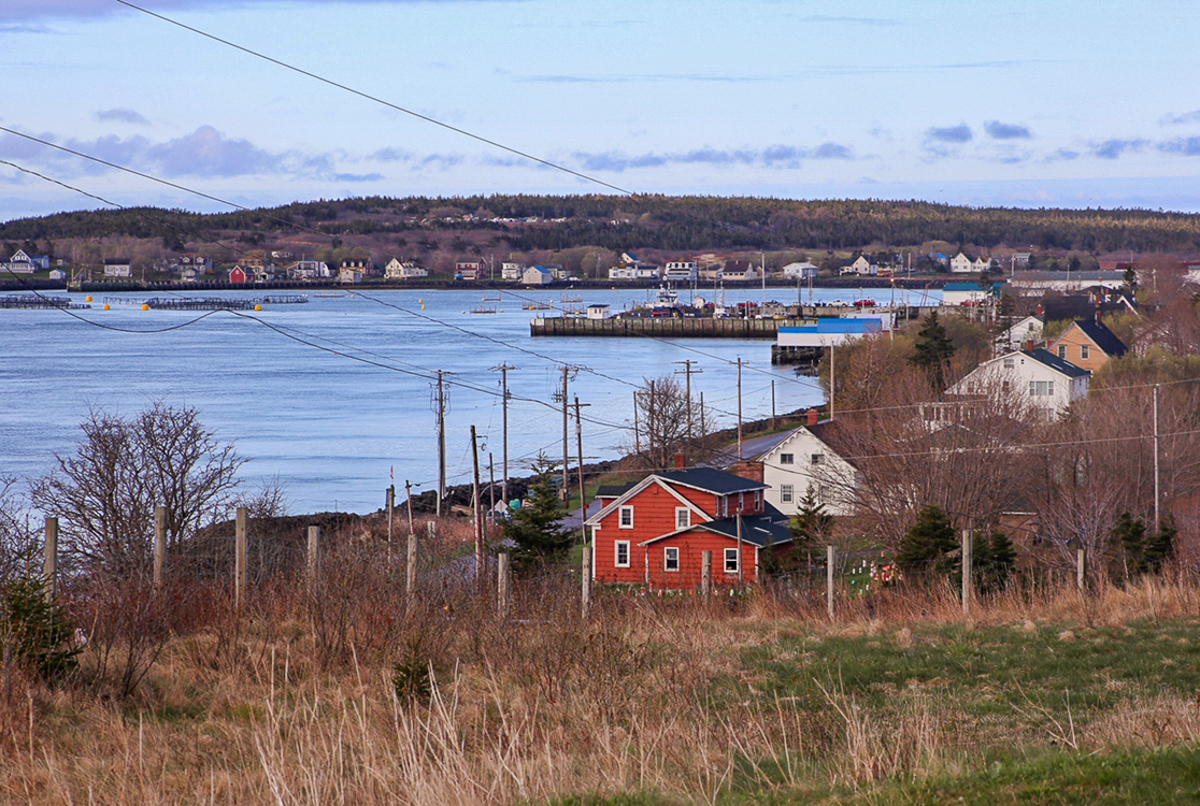 The village of Westport on Nova Scotia’s Brier Island, where PLAT-I is being tested.
(Photo: Alexandra Pope/Canadian Geographic)

Various technologies have been tested to harness the estimated 42,000 megawatts of energy potential off Canada’s coasts, with mixed results. Canada’s first in-stream tidal energy project, the Race Rocks Tidal Energy Project, saw a horizontal axis turbine installed on the seabed in the Strait of Juan de Fuca, southwest of Victoria in 2006. It generated power, but was removed in 2011 after a series of mechanical and electrical failures.

Nova Scotia, a natural proving ground for tidal energy thanks to Fundy’s legendary tides, is home to North America’s first tidal energy power plant at Annapolis Royal. The plant is an example of the “barrage” method of tidal generation, which uses a dam-like structure and sluice gates to control tidal flow. It was ordered to shut down in April 2019 after the Canadian Science Advisory Secretariat reviewed data on fish mortality. The secretariat found the province had failed to disclose to Fisheries and Oceans Canada reports of dead fish downstream from the turbine. Fisheries research from the 1980s showed, for example, that Annapolis Royal’s turbine killed almost a quarter of American shad that passed through it, but the plant operated for three decades with minimal scrutiny from federal regulators.

In the summer of 2018, Cape Sharp Tidal installed an enormous two-megawatt tidal turbine on the seabed at the Fundy Ocean Research Centre for Energy in the Minas Basin, about 400 kilometres northeast of Westport. So-called in-stream devices like the Cape Sharp turbine do not use dams or enclosures and so are considered to have a smaller environmental footprint than tidal barrages. But that project too had its opponents, with local fishers expressing concerns about the turbine’s impact on marine life and what they saw as a lack of adequate public consultation as early as 2016. It also didn’t work. Days after the turbine was installed, its owners declared bankruptcy, though a September 2018 Canadian Press report noted it had been operational before being damaged beyond repair, probably by a faulty generator component. It’s still unclear who will cover the costs — estimated at up to $3 million — of removing the turbine from the seafloor. 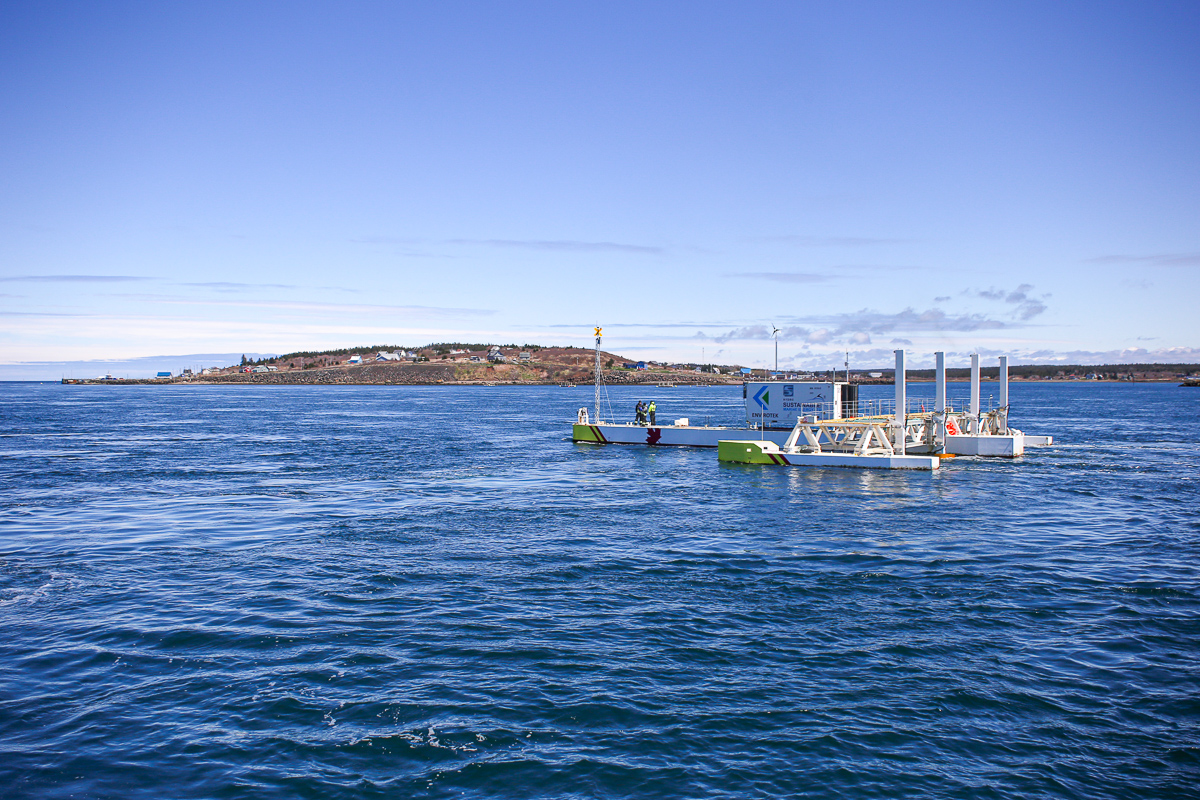 PLAT-I in the Grand Passage, with Westport and its harbour visible in the background.
(Photo: Alexandra Pope/Canadian Geographic)

PLAT-I, meanwhile, was designed specifically to overcome the problems with earlier tidal energy technologies. It’s surface-based rather than seabed-based, making it easier and less costly to maintain and repair. Its four turbines are mounted on hydraulic lifts, so they can be independently raised out of the water for maintenance without taking the whole system offline. And, if more extensive repairs are needed, or severe wind is forecast, the entire platform can be towed to shore.

“The serviceability of this device is incredible, and we can do it with much smaller vessels than have been previously used in the Bay,” says project manager Clarkson. “Really, the only thing that’s a restriction for us is the weather, but we’ve had 60-knot (111 kilometre per hour) wind gusts in the passage and the platform has stayed in the same spot.”

PLAT-I’s size and passive design also mean it should have less impact on the marine environment than seabed-based turbines.

To help ensure that, underwater cameras on each of PLAT-I’s outriggers are continuously recording the turbines. The footage will be analyzed by a third-party and the results forwarded to the Fisheries and Oceans, who may recommend adjustments to the platform based on observed interactions with wildlife.

Clarkson also has the ability to stop the turbines with the push of a button on his phone if whales are sighted nearby.

Watch: Testing PLAT-I in the Bay of Fundy

Ouaknine’s background is in telecommunications; in the 1990s, he built and successfully scaled up three technology companies, two of which he sold to publicly-traded corporations. The third went public on the London Stock Exchange. For a second act, Ouaknine wants to apply his expertise to climate change solutions. Often, he says, clean-tech companies have no trouble attracting startup capital, but struggle when it comes time to bring a product to market. With PLAT-I, Inerjys invested in both the parent company, Schottel Hydro, and SME, helping to bring the technology out of the lab and into the water.

“If you listen to the climate scientists, they’re saying the march to renewables has to happen much faster,” says Ouaknine. “What we’re trying to focus on is technologies that will bring down the cost of clean energy, that will get deployed — otherwise you’re not actually moving the needle on emissions.”

But not everyone is as bullish on the future of tidal.

Penny Graham has operated Mariner Cruises Whale and Seabird Tours out of Westport since 1994 and worries about the potential impacts of projects such as PLAT-I on marine mammals who are already facing increased pressure from shipping and plastic pollution in the bay.

“It’s good to have new inventions and to have the ability to reap the benefits [of our tides], but are we going to bring harm?” she says. “Whales are our heritage, so that is my concern.”

Graham has suggested protective baskets could be installed around PLAT-I’s turbines to prevent injury to passing cetaceans. “[Enclosing the turbines] would give everybody peace of mind that they’ve done everything they can possibly do to protect what we’re so proud of,” she says.

Hayman says buy-in from the community is essential to the success of PLAT-I. SME’s long-term vision is “the democratization of energy.” By adding energy storage and grid stabilization (to manage supply and demand) to the platform, energy produced in Westport could power Westport businesses. “You can start creating a situation where these coastal communities can actually take control of their energy production.”