“You’re a real target,” my husband chuckles after someone dressed like a character from The Purge franchise lunges at me, stopping just inches from my face. This is about the twentieth time a character has purposely tried to scare me since we entered Universal Orlando Resort's Halloween Horror Nights event, and though I should expect it, I can’t help but jump and let out a little shriek. Every. Single. Time. What can I say? I’m a good audience.

As we make our way through the hordes of people gathered on a hot evening in Universal Orlando Resort theme park in Florida, I feel giddy as a kid on Halloween, sprinting from one jack-o-lantern-lit house to another. Halloween Horror Nights, an annual event held at Universal Studios select evenings from mid-September to November 4, is like Halloween on a frantic sugar-high — a scare event on a dizzying scale that could only be pulled off by one of the best theme parks in the world.

For more than 20 years Universal Orlando Resort has scared the pants off guests, transforming itself each fall into what it calls the premier Halloween event in the United States. Actors don spine-chilling costumes and lunge at patrons, movie-quality haunted houses draw huge crowds and streets are transformed into the settings of popular horror films.

I spot one of the first creepy characters of the evening: an actor dressed as the Bride in Black from the Insidious franchise. The bride, costumed in a black wedding dress with a veil obscuring its demonic-looking face, is roaming one of the event’s Scare Zones (which is exactly what it sounds like) and momentarily pauses its eerie parade to swipe at guests — and pose for the occasional selfie. I see other costumed actors terrorizing guests all around me. The whole place is buzzing with shrieks and giggles, camera flashes and the odd patron running for their lives. I can’t wait to explore. 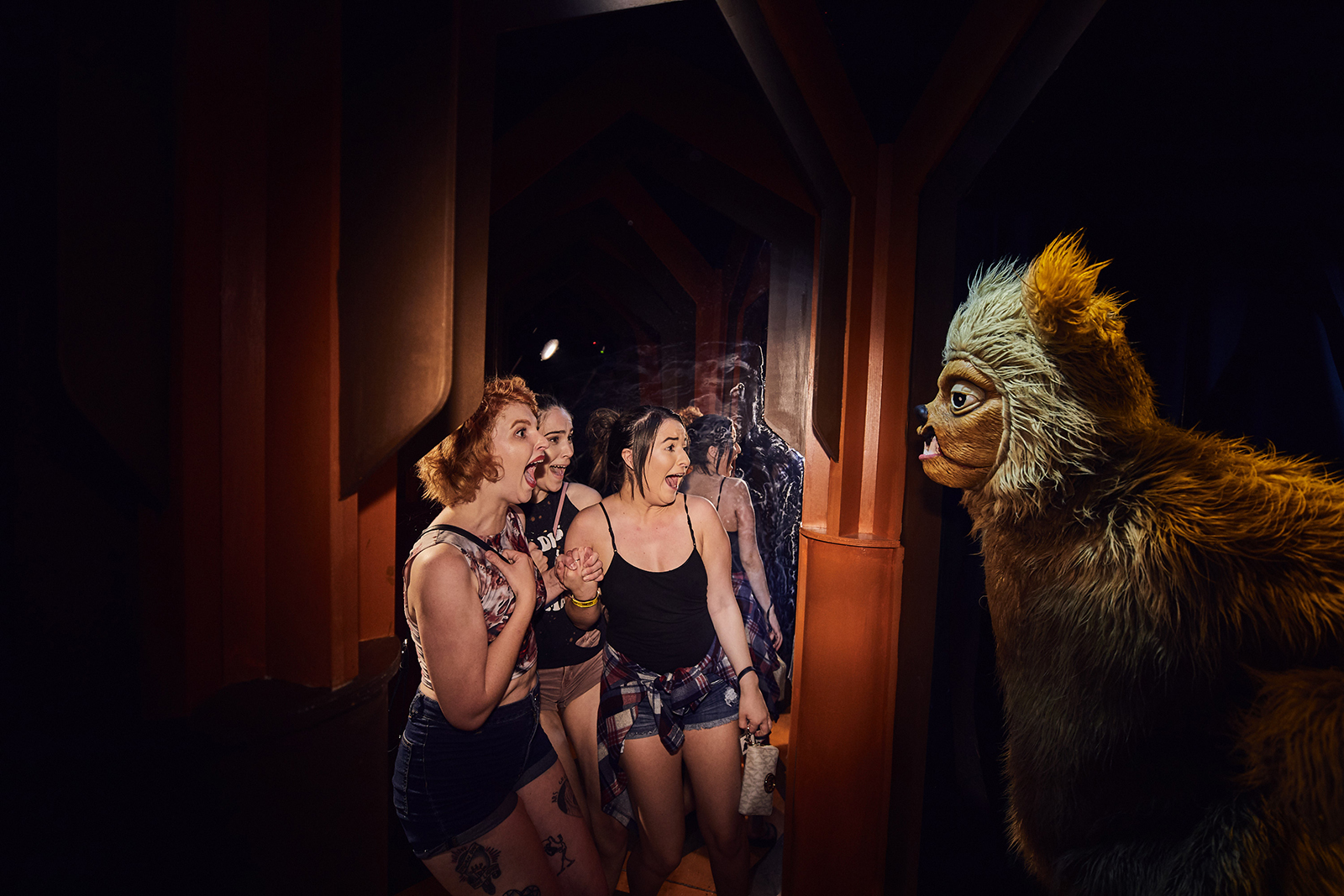 “Hey, what’s in there?” My husband points to one of the nine haunted houses in the park. The line-up is huge, snaking up and down aisles and along barriers, but we’re armed with express passes (worth it!) and run-walk to the end of a much smaller line awaiting entrance to the Overlook Hotel, a space that’s been transformed into the haunted setting of the 1980 horror classic, The Shining.

“Here’s Johnny!” growls one of the actors playing main character Jack Torrance, as he bursts through a broken door with a hatchet — hopefully dull — in hand. I jump and shriek again, as has become my custom, and grab onto my husband’s hand. If you’re going to tackle a classic horror movie, like The Shining, you had better do it right. And this attraction was scary good. From the geometric orange carpet to the bloody elevator to the ghostly bar and finally, to the snowy hedge maze, Universal Orlando's take was terrifyingly realistic. 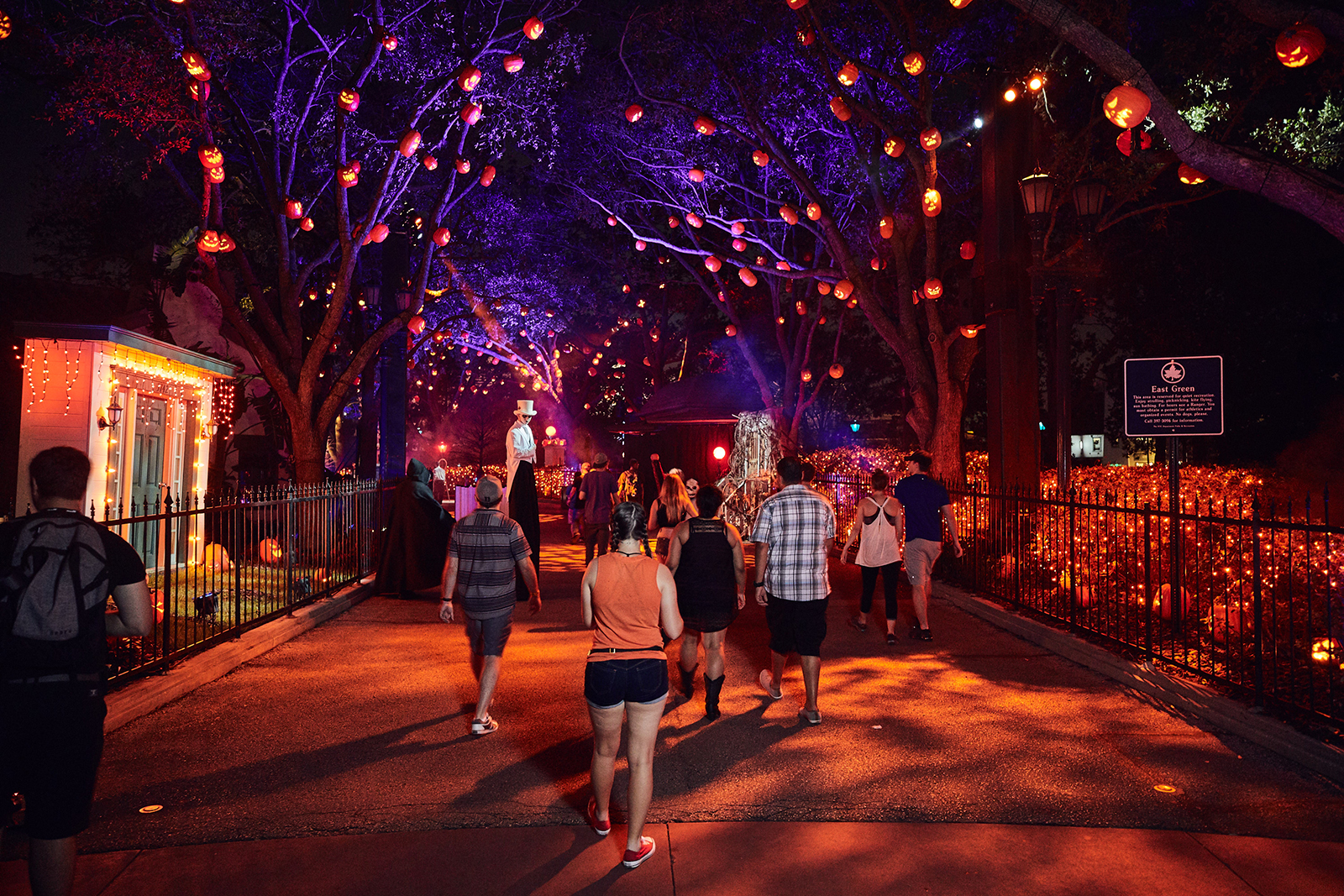 As we exit the Overlook, I sing its praises to the courteous staff, and immediately begin planning the next thrill. In one direction, strange figures move behind the fog on a desolate street; elsewhere, another snaking line-up waits to enter a Saw-themed attraction. In the distance, I spot a giant archway of jack o’ lanterns, and get those same butterflies in my stomach. I grab my husband’s arm and sprint towards the glow.