Lead author Aaron MacNeil discusses what this means for coral ecosystems and what Canadians can do to help
By Madigan Cotterill
August 17, 2020

Sharks are the apex predator of the sea, but they also play an important role in marine ecosystems, helping to balance marine food chains and remove diseases from the water. Due to unregulated fishing, however, many shark species are in severe decline with an estimated 100 million sharks being killed each year for their fins and meat.

Revealing an alarming loss of shark species, a new global study has found that reef sharks are ‘functionally extinct’ in nearly 20 per cent of surveyed reefs.

The study, published in Nature by Global FinPrint, was launched by the Paul G. Allen Family Foundation and a team of researchers. Founded in 2015, Global FinPrint is the world’s largest reef shark and ray survey. Using baited remote underwater video systems (BRUVS) to record what species of sharks are found on coral reefs, Global FinPrint deployed more than 15,000 BRUVS in almost 400 reefs in 58 different countries. The goal of the project was to get a baseline picture of the status of reef sharks globally, and to understand their variations in different places.

Lead author of the study, Aaron MacNeil, completed his undergrad at Dalhousie University, where he now works as an associate professor. During his time as a student, MacNeil was influenced by the work of Ransom Myers, a world-renowned marine biologist and conservationist who was doing his pioneering research on the decline of shark populations. This research interested MacNeil and inspired him to look at declining shark populations in a quantitative way.

Canadian Geographic spoke to MacNeil about the study and what Canadians can do to help shark populations in the country and around the world.

On what was discovered

In terms of what we found, there were some things that were surprising and some things that weren't. I think given the state of reef sharks in the open ocean we were expecting there to be a lot of depletion and that's what we saw. We found that 20 per cent of the reefs that we surveyed had no sharks on them at all. And this is what we consider for the reef sharks to be ‘functionally extinct’ in ecosystems. This means they don't play any role in terms of functioning, of how those ecosystems are working right now.

On how it’s not all bad news

There were eight countries where we found basically no reef sharks at all, which is pretty disheartening and pretty disturbing. But, on the other hand, of the 58 countries that we've surveyed, 20 of them are doing pretty well. We found actually that there was kind of more resilience overall than we might have been expecting. There are places that are demonstrating that they can support reasonable size populations of reef sharks so that was really encouraging.

The other things that we found were relationships and various management positions. At the top end, you have shark sanctuaries. These are places where they banned all catch and trade in sharks. They are places that didn't tend to catch sharks anyway, but they did put in this legislation and they are places that had tended to have the highest abundances. They were certainly a globally important kind of reservoir for reef sharks.

We also found that management areas (closed areas), can be very effective for protecting reef sharks, provided they're large enough. These are tens of thousands of hectares, so pretty big.

On how fishing gear plays a role

We also found that in places where people do fish, and do fish for sharks, that there's a trade-off in terms of the gear that they use. So the most destructive gears that we found are gill nets and long lines and they catch indiscriminately, regardless of whether people are going for sharks or not. This type of gear will catch the shark, and if they are not swimming, they'll drown. So they're very effective at killing sharks. Whereas places that were using hook and line fisheries predominantly, they tended to have much higher abundances of reef sharks. There is a trade-off there that can be made, if you're in a place where people are willing to do something about the fisheries that they're engaged in and to change their gears to have a more targeted gear, then you can see these really strong benefits for reef sharks. All of these things together really mean that there's kind of a portfolio of options for reef sharks around the world in terms of how they might manage in the future.

On why sharks are important to coral ecosystems

This gets into what role they play. We know from other systems that we study, like the classic lions on the Serengeti, that predators control the herbivores that eat the grasslands. If you don't have enough predators, then the herbivores overtake the grasslands, and the whole system collapses. These are the types of roles that predators play in these ecosystems that we know well, and we're almost certain that this happens on coral reefs. But what we don't know is exactly how it happens. In the savannah system, you're talking about predators, grazers, and the grassland itself, those are kind of three ecosystem components. Coral reefs have thousands of species, and certainly dozens to hundreds of different functional components. Trying to work out exactly how that all fits together is much more complicated and difficult. But that said, we know that in ecosystems, predators do control the populations that are below them. You just have to think about the fact that these ecosystems would have evolved with these predators in them. In terms of how they function, and how they evolve to function, this is the way they should function. Certainly, things will get out of whack, relative to how the ecosystem evolved if they are not present there.

On what this means for Canada

The real global concern for sharks really started with that work, and those are sharks that were copied off our coasts and throughout the open ocean ecosystems. Things like white sharks, oceanic whitetip sharks, and makos, all these various open ocean shark species. The decline of those was documented by Ransom and Julia 20 years ago, and trying to understand what the ecosystem effect of that is, is important. I think what the reef shark case does is it sort of gives us a more concrete case to understand the roles that sharks play in ecosystems generally. Once we learn about that, we can then go and look at these other ecosystems and maybe see the role that sharks may have played in ecosystems in the open ocean. Even look at the ones here in Canada, and see how they've responded to the threats that we have that are ongoing from overfishing and climate change. It's really about learning about the sharks and their functional role, and then we can take that knowledge and apply it here in Canada where we have had very large scale declines in open ocean shark populations.

On what Canadians can do to help sharks

In general, what we're talking about here mostly has to do with overfishing. One of the results that we have is that some of the places that are doing the very worst are places where there's really entrenched poverty, where there are bigger scale problems than just sort of conservation problems. But for a lot of places around the world, the sharks have been reduced to very low levels due to over demand and overfishing. And so, as Canadians, we import a huge amount of food, some of which is seafood from places overseas. I think making sure that the seafood that we are eating is sustainable [is important]. There are eco-certification programs for people that want to do a quick and easy check, or you can speak with people who are involved in various fisheries to understand how sustainable seafood is. I think it's important that as consumers and importers, we drive the global demand for seafood to some extent. 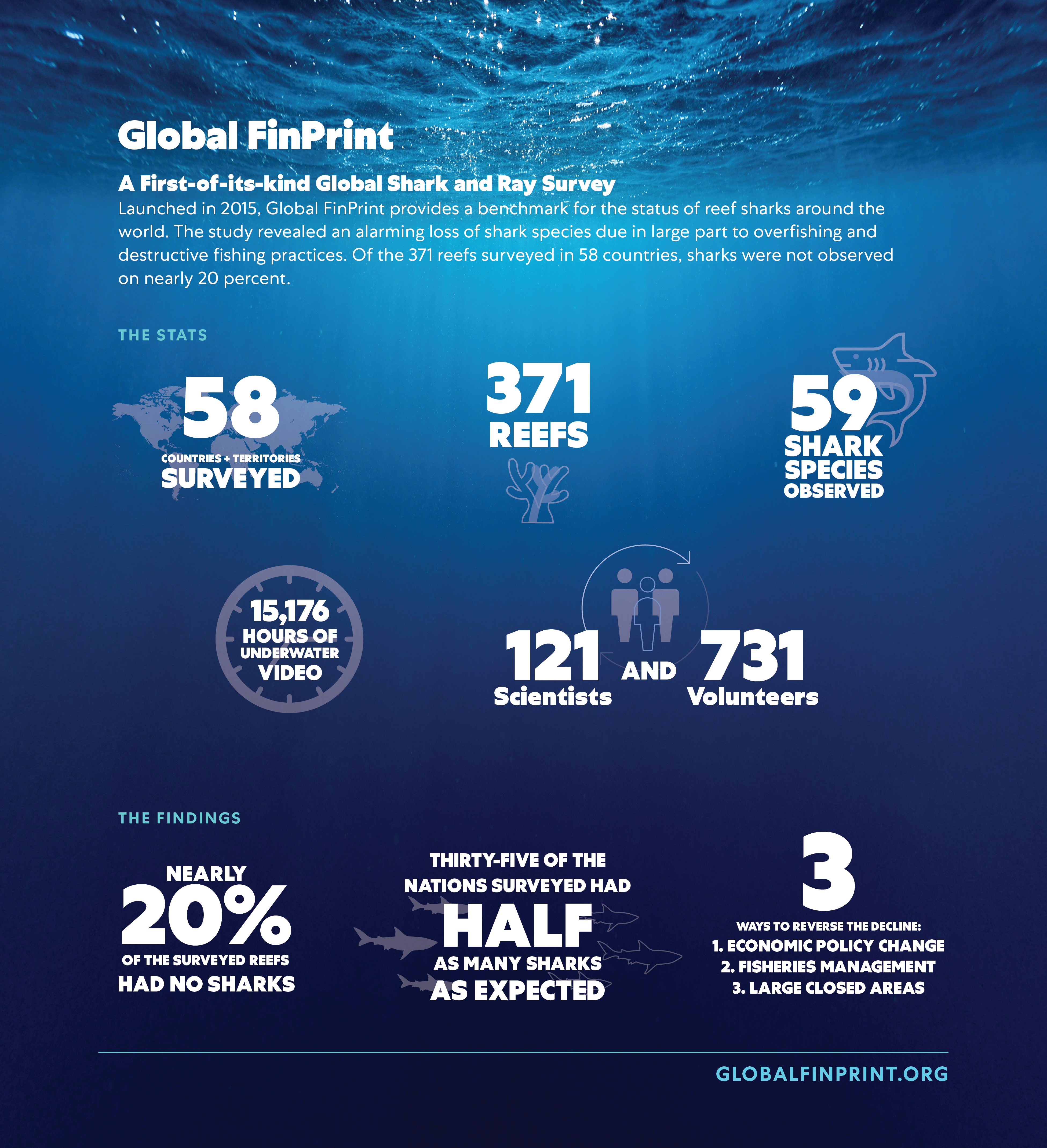