Sinking or swimming? The challenges of polar bear research in a changing Arctic

“If you shoot a polar bear with a dart and the ice is thin and broken up, it could get into the water and drown. It’s not a safe environment for researchers either.”

Steven Amstrup is Chief Scientist at Polar Bears International, an organization dedicated to polar bear conservation and public education. More than 40 years of experience has given him a unique understanding of the challenges, costs and dangers associated with polar bear research.

There are 19 distinct polar bear subpopulations, 14 of which are in Canada or based on land Canada shares at least a partial claim to. The remaining five are spread between areas claimed or partially claimed by Russia, U.S.A., Norway, Denmark and Iceland. Since the start of satellite records in 1979, the number of days per year that sea ice is present has declined in every single region.

Take the Barents Sea area, which encompasses Russian and Norwegian territories. Data collected by the Polar Bear Specialist Group (PBSG) for their 2021 polar bear status report shows that since 1979, there has been a 156-day reduction in days that sea ice is present. This means 156 fewer days per year for polar bears to hunt seals — their preferred prey — in ideal conditions. The story is consistent across each subpopulation. Where once there was multi-year sea ice, there is seasonal ice; and where once there was seasonal ice, there is open ocean. In 2018, the US National Oceanic and Atmospheric Administration concluded that multi-year sea ice had declined by 95 per cent since 1985.

With sea ice disappearing at the rate it is, one would expect polar bears to be doing the same. Yet the reality isn’t so simple.

The PBSG 2021 polar bear status report showed that while three of the 19 subpopulations have likely decreased over the last generation, four are stable (including the Barents Sea subpopulation) and two have actually increased. The remaining 10 subpopulations lack reliable data to such an extent that trends can’t be determined. Why is our picture of the status of polar bears — an iconic symbol of the fight against climate change — still so murky?

“Polar bears live so far away from people that logistical arrangements can be very difficult and very expensive,” says Amstrup. “So it’s always been a challenge to gather data. In fact, costs are going up dramatically.”

Amstrup says that while we have a good understanding of what polar bears require to live and their genetic status, their way of life makes it difficult to track population trends.

While bears do spend time on land — particularly females with young — much of their lives are spent at sea, says Amstrup. Moreover, satellite tracking shows the bears have the potential to cover a massive range. One satellite-tracked female trekked 4,796 kilometres from Alaska to Greenland to Ellesmere Island and back to Greenland. To even use this tracking method requires researchers to go out onto the ice, far from human settlements, and capture, tag, collar and release the bears. 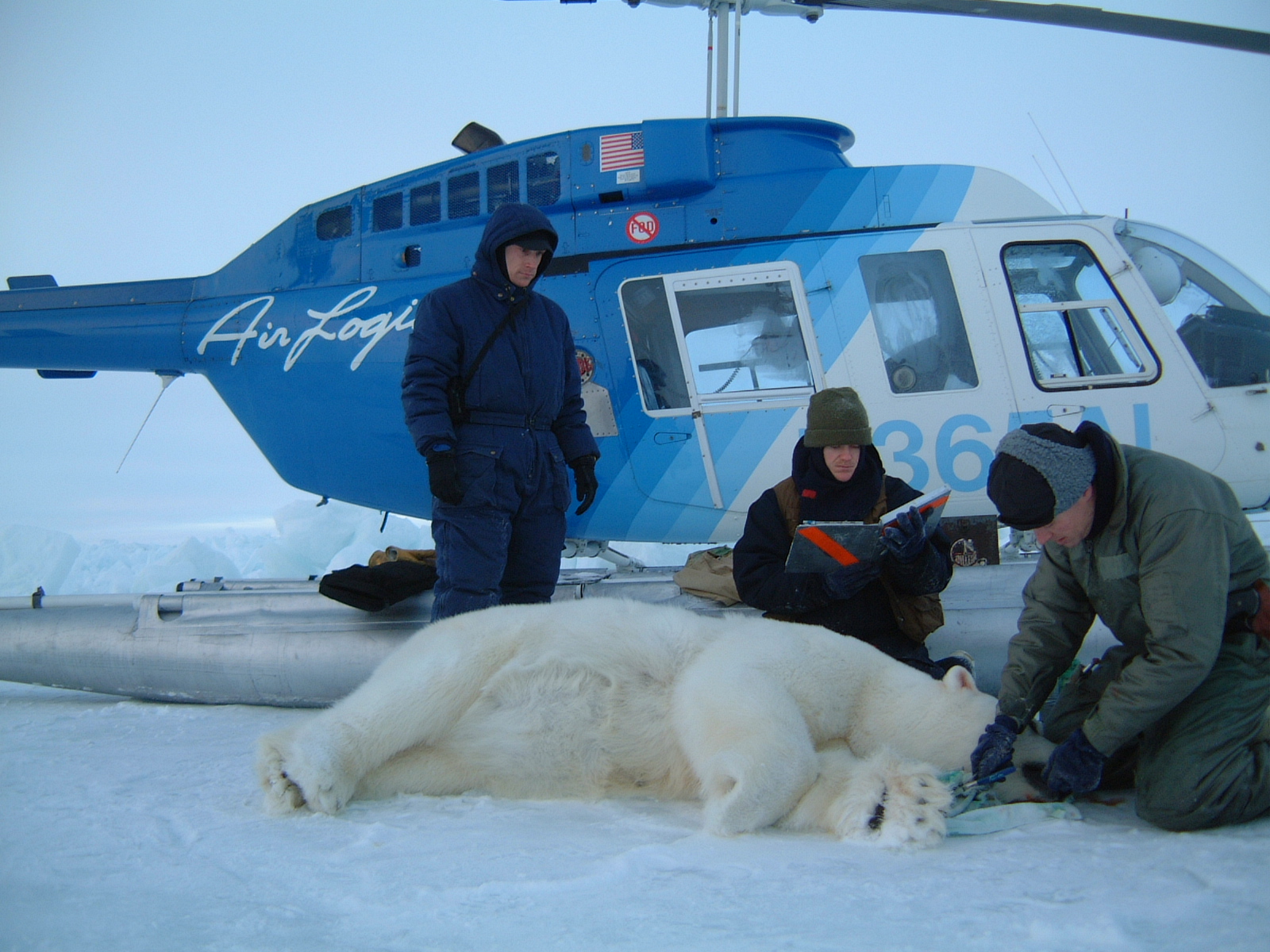 Biologists capture and work on a bear during the Arctic autumn. (Photo: Steve Amstrup/USGS, CC BY-NC-ND 2.0)

It’s also becoming more dangerous, for scientists and bears alike. Patchy ice coverage means more places for a near-tranquilized bear to stumble off the ice, says Amstrup, and the same goes for researchers.

As well as being difficult to collect, the scientific data and methods often conflict with what is seen and believed by the people living closest to polar bears.

“There’s an honest reluctance for people who have thousands of years of history with the bears, and who have a reverence for them that doesn’t include this type of work,” says Amstrup of live-capture tagging methods.

Alternative data collection methods have been trialed with varying degrees of success. Aerial surveys provide a good population estimate. However, they don’t provide a population trend unless they are carried out year after year. Nor can they provide any information on the bears’ body condition — an important indicator of the health of the local ecosystem.

Another alternative is biopsy darts: darts with small blades that take a plug of flesh from the bear before detaching. They are safer, as the bear isn’t immobilized and the researcher can retrieve the dart without spending much time on ice. The drawback, again, is the reduced amount of data that can be collected. 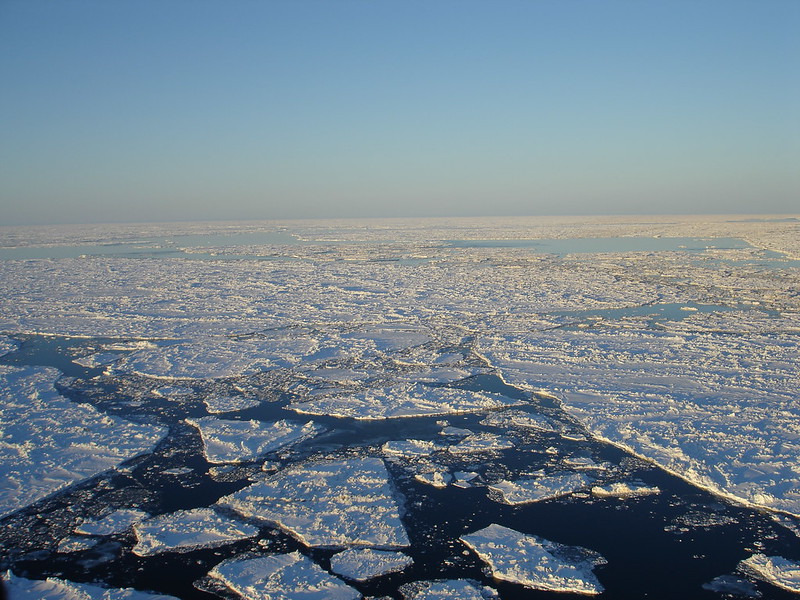 One innovation does offer a way forward, according to Amstrup. In a 2020 paper led by University of Toronto researcher Péter Molnár, Amstrup and his colleagues describe a method of modelling the future of polar bears without having to venture into the field for data.

“We went back to what polar bears require,” says Amstrup. “What are the energetic limitations that they face? What kind of a data point would help us address that? And we found out that the real limiting factor for polar bears is the number of ice free days.”

By modelling how the number of ice free days will change over time, and combining this with the known energy requirements of bears, Amstrup and his colleagues can predict when bears in each region will begin to suffer — all without having to set foot on the ice.

“The important aspect is that it recognises the limitations we face and tries to understand the future of polar bears in a different way,” says Amstrup. “It doesn’t give us a direct estimate of survival. But it does tell us when survival is going to be dramatically reduced. From a management standpoint and conservation standpoint, that's really what we're after.”

Studying these bears is undoubtedly hard. Managing them, with such an incomplete picture of their status, may be even harder. Novel techniques provide a safer way of modelling the future of polar bears, away from the thinning ice. Consensus says, however, that the danger posed by a warming Arctic is greater. And while some subpopulations are not yet touched by this danger, they eventually will be.