Salmon in the city

Yonge Street, University Avenue, and Bloor Street are all popular roads entangled in the busy city of Toronto. Used by citizens as transportation routes, these roadways are a constant bustle of activity.

Toronto’s river system is also used as a heavy traffic route — by salmon. The river system in the city is made up of numerous man-made and natural waterways, from the Don to the Humber River. These water highways dominate a large part of the city, and one of their more frequent voyagers is salmon.

Every fall, thousands of coho and chinook salmon perform a salmon run, leaving Lake Ontario and making their way up the river system to find spawning grounds. They try to get as far north as they can to find cold water and gravel, appropriate for them to spawn in and lay eggs.

Rick Portiss, senior manager of Aquatic Monitoring and Management for the Toronto and Region Conservation Authority (TRCA) says that Toronto’s waterways are integral to the salmon’s life cycle.

“They are just as important as they have ever been,” he says.

The salmon’s ability to get to their destination, however, can sometimes be a challenge.

Implemented to help mitigate flooding after Hurricane Hazel in 1954, weirs (low dams used to regulate water flow) were placed in the Humber River to control erosion and manage water levels. These weirs became barriers for the salmon, preventing them from moving upstream.

In 2000, the Ministry of Natural Resources and the Conservation Authority would electroshock the salmon, place them in buckets and transport them to Woodbridge to get them to their spawning grounds, says Canadian historian Madeline McDowell. This allowed the salmon to get to where they needed to be to spawn.

Then in the early 2000s, several four metre wide trapezoidal notches were cut into the weirs to concentrate water flow and reduce the height of the weirs. This enabled the salmon to then move upstream without the need for human intervention.

Today, in September and October during the salmon run, these weirs along the Humber become popular meeting places for the public to come and observe the salmon. Each year, the TRCA runs an annual salmon festival, which Portiss says can see two to three thousand people.

“The locals, they come down, particularly to the first and second weirs, with their lawn chairs, says McDowell. “They cheer for the salmon leaping because they don’t always make it. That’s their entertainment on Saturday or Sunday, rather than watching the television or something like that.”

As a founding member of Heritage Toronto and the Toronto Historical Association, McDowell has a great love for the Humber River and the environment.

For Toronto residents like Giulio Villani, observing the salmon is something he does with his children and grandchildren. 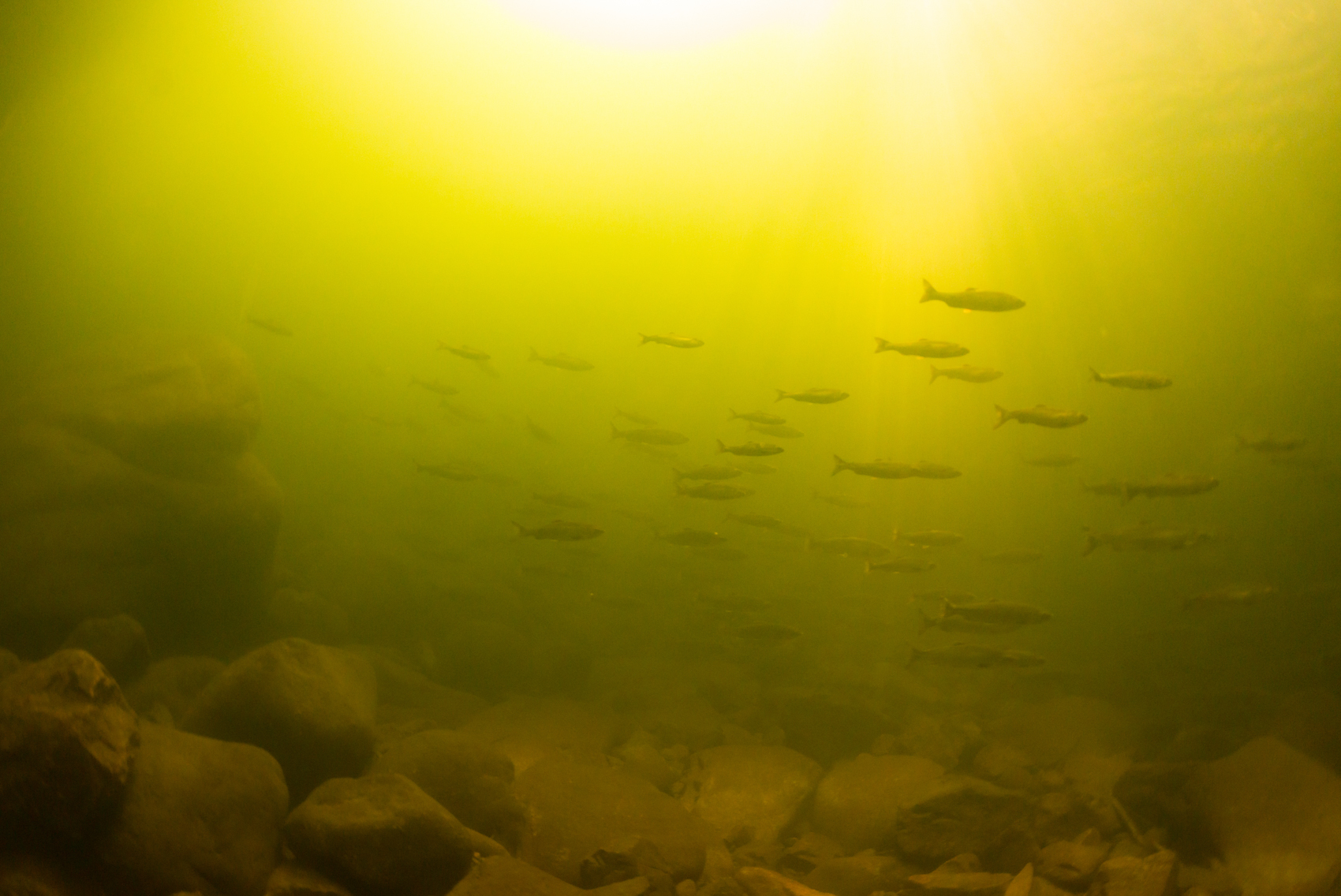 Pacific salmon are the most prevalent in Toronto, but aren't native to the area. (Photo: Fernando Lessa/Can Geo Photo Club)

“I can see them spawning from my backyard,” he says. Overlooking the Humber, Villani’s garden has an ideal view of the river. “It’s nature at its best.”

Although Pacific (coho and chinook) salmon are the most prevalent in the city, they are not native to the area. Historically, Atlantic salmon were found in Lake Ontario, but became extirpated in 1898 after European Settlement. In the 1990s, after intense stocking programs throughout the 1900s, coho and chinook salmon were discovered in Lake Ontario and surrounding areas after the Atlantic salmon had disappeared.

In recent years, efforts have been made to restore Atlantic salmon to the area. In 2006, the program Bring Back the Salmon was launched. Co-led by the Ontario Federation of Anglers and Hunters (OFAH) and the Ontario Ministry of Natural Resources and Forestry (OMNRF), the program also works with more than 40 partners to help deliver the program. The goal of the program is to restore a self-sustaining population of Atlantic salmon to Lake Ontario, and its surrounding tributaries while also supporting recreational fisheries.

Historically, Atlantic salmon were once an important food source for Indigenous and European settlers, says OFAH Atlantic Salmon Restoration Program Coordinator, Kathryn Peiman. They were also once one of the top predators in Lake Ontario.

Structured into five-year phases, the Bring Back the Salmon program is built on four pillars: Fish production and stocking, water quality and habitat enhancement, outreach and education, and research and monitoring. Right now, the program is finishing up its third, five-year phase, and moving into the next one.

“Every time we [move into the next], we learn about what we’ve done and how to do it better,” says Peiman. “The program has been going on now for 15 years, which is not that long considering what Lake Ontario is now, it is certainly different than it was in the 1800s.”

Since the launch of the Bring Back the Salmon program, the presence of Atlantic salmon has been noticed. Portiss says that the TRCA has seen them in surveys, both in Lake Ontario and the surrounding river systems. Other species of salmon, such as chinook and coho have all been able to reproduce on their own in vast numbers.

As an important part of Ontario’s natural heritage and biodiversity, it is important to try and restore Atlantic salmon to Lake Ontario.

“We do not pay nearly enough attention to the natural environment and looking after it,” says McDowell. “They really are great big fish and they’re quite exciting to watch.”

This StoryMap created by the Bring Back the Salmon program provides more information on the history of the extirpation of Atlantic salmon in Lake Ontario.