One year into her term as Lieutenant Governor, Her Honour, the Honourable Salma Lakhani reflects on her journey so far and her hopes for her province and country
By Kate Helmore
August 26, 2021

In 1972, Salma Lakhani became a stateless person. Her home country, Uganda, had expelled its entire Asian minority population. An undergraduate student in the U.K. at the time, Lakhani was suddenly stripped of everything she and her family owned, except her education.

Five years later, Lakhani arrived in Edmonton as a new immigrant; today, she is Lieutenant Governor of Alberta.

Canadian Geographic spoke to Her Honour about her extensive volunteer work, her focus on inclusion and education, and what it means to be the first South Asian and Muslim person to hold the high-profile role.

On her reaction upon being appointed to the role

My first reaction was, “I don’t think I can do justice to the role.” My work has always been grassroots, working with communities, new Canadians and marginalized populations. And I always did it in a quiet way.  But sometimes you just have to step into something that you’re not comfortable with or feel that you cannot do. And that is good; it will build you into a stronger and more knowledgeable person. I think all of us have different potential and abilities and really sometimes all it takes is stepping outside your comfort zone and saying, “Yes, I’ve never done this before and yes, I am anxious, but I will give it my best shot and I will be able to contribute something.”

I think the appointment marked a promising step forward in our country’s history. And it speaks to our country’s values of diversity and inclusion. And it also tells us that at the highest levels, this country is accepting of all of our contributions. I was the first Muslim and the first South Asian, but I know I won’t be the last. Of course with some of the things that have happened in the last little while, we all realize that we have to pull together and work a lot harder toward inclusion, making this country welcoming for all people who live in Canada.

On her memories of arriving in Canada

I’ll never forget the first day I arrived in Canada. My husband and I had been married just one week before. We flew from London, England where all my family was and arrived in Edmonton on June 25 around midnight. We got in the rental car and started driving. There were no streetlights at the time, so we kept on driving in the dark, kilometre after kilometre. We stopped in the first motel we saw, a truck stop. I had a few tears that night. I said to my husband “I don’t know if we’ve come to the right place. I don’t know what life has in store for us.” I felt really lonely and low. He consoled me by saying we’d only be here for his education, just one or two years. And, well, one or two years turned out to be a lifetime, and an amazing lifetime at that. 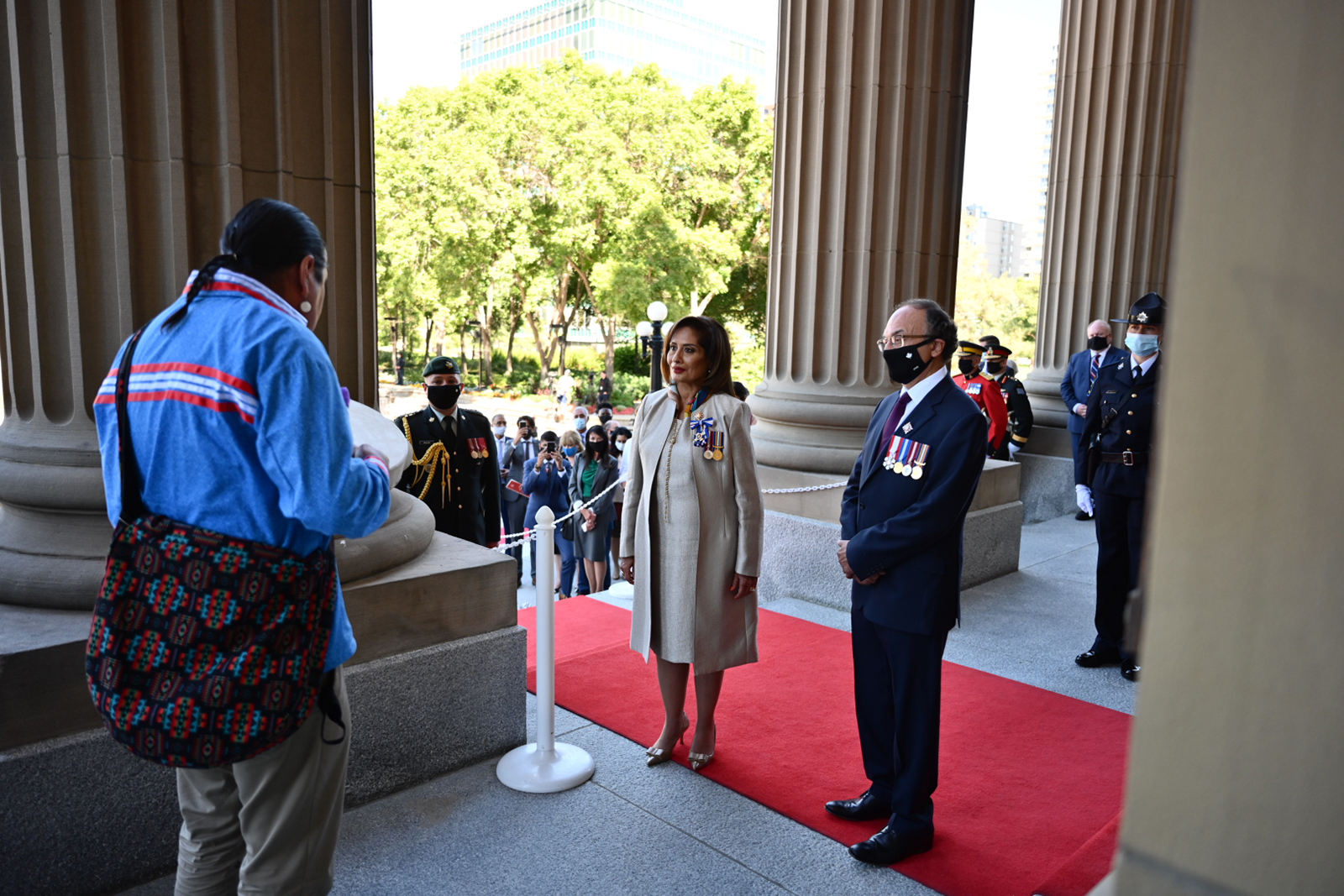 Lakhani, pictured here with her husband, His Honour Dr. Zakeer Lakhani, was installed as Lieutenant Governor of Alberta on August 26, 2020. Drummer Rocky Morin, left, of the Enoch Cree Nation performed the Honour Song as part of the ceremony.
(Photo courtesy Legislative Assembly of Alberta)

On how Canada can become more inclusive of all peoples

I think the main thing is to have dialogue and conversations. For example, after the discovery of the mass graves at Kamloops Indian Residential School, I had a meeting with a First Nations Elder, Roy Lewis. And he said to me that while this is extremely sad for all Indigenous people, and it’s sad for all Canadians, it is an amazing opportunity to learn and to understand. This is where I hope to be able to play a role. You know, showing people that while we might look and dress differently, talk differently, we actually have so much in common and we can work together to build a more inclusive, welcoming, and tolerant society.

On the importance of education

When we were expelled from Uganda, both my husband and I were students in the U.K. Prior to that we had excellent high school education. We lost everything when we were thrown out of Uganda. They stripped us of everything of material value; we could only leave with what we could fit in a small suitcase. But the one thing they couldn’t strip us of was what was in our head. So I always say to never give up on your education. It is something that will stay with you forever.

On her plans to spotlight volunteerism in Alberta

My own journey has drawn me to grassroots movements. I believe that this is where the work happens, and I believe that most volunteers do what they do because they care. They care to make the province and country a better place. Yet, most of them don’t get recognition. So I wish to shine a spotlight on these volunteers who are making things happen, who are building a vibrant, successful, inclusive society and community.

On her hopes for her term as LG

As someone with African roots, I always think of the word ubuntu. Simply translated, it means “I am, because we are.” It talks of the interconnectedness of each one of us around the globe, not just in little communities. When any one of us succeeds, we all succeed. What I would like to see when I leave office is people all feeling invested in our country, and that they can develop their potential to the fullest.