The latest in our Colour the Trail series
By Nyarai Tawengwa
June 25, 2021

Sandy Ward, from Lil’wat Nation, is doing what she loves in the outdoors, from snowboarding, to climbing and mountain biking. She is a backcountry enthusiast and snowboard instructor. She hopes to influence more Indigenous youth to get into the outdoors — and is a member of Indigenous Women Outdoors (IWO), which was founded by Myia Antone.

Colour the Trails caught up with Sandy on her love for the outdoors, integrating Indigenous knowledge and creating spaces for Indigenous women with Indigenous Women Outdoors.

On getting into the outdoors

The reason I really got into the outdoors was because of the First Nations Snowboard Team. I had wanted to snowboard,  so I ended up buying a snowboard with my first paycheck from my first job, and a friend teaching me. I broke my wrist the first time, actually, but that didn’t stop me!

When I had been snowboarding for a year or two, I got a call from the First Nations Snowboard Team. They wanted to put together a group of Indigenous youth to work towards getting a First Nations person on the podium at the 2010 Olympics — so I went for it. I trained really hard and I met amazing people. It really got me into the mindset of being an outdoor recreationalist and athlete, so I branched out into other sports from that. I really do think that without the First Nations Snowboard Team, I wouldn’t be who I am right now.

On becoming a part of IWO

Actually, it was through Facebook. I was tagged in one of Myia’s posts looking for other Indigenous women who were involved in backcountry skiing and I’ve always been known within my community as “the snowboarder”. I messaged Myia, and we got together last September. Myia had organised a hiking program for the Squamish Nation and was branching out when I met her. We thought to get both Lil’wat and Squamish Nation involved. IWO all evolved from her hiking program, which was very successful. We hit it off immediately and decided to partner in doing a backcountry program. 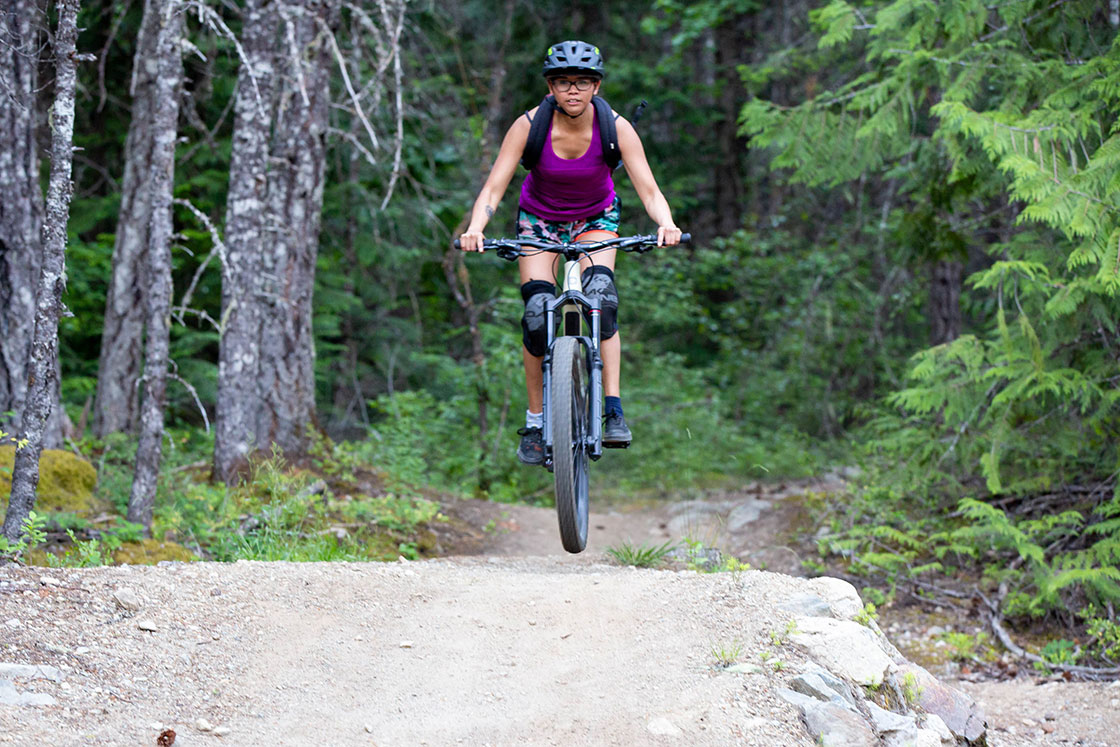 On the mission and goals of IWO

We hope to not just get women involved in outdoor recreation; we want to see them succeed within the industry. We provide a lot of training to get Indigenous women that knowledge, that experience, to become hiking guides or weather forecasters. Whatever they want within the outdoor industry itself. We’re not only focused on them enjoying themselves now — which is very important to our mission — but we also want to see them succeed in the future with employment within the industry.

For example, with the hiking program that Myia is running this summer, it’s very focused towards individuals who want to get their hiking guide certification. And, through this, getting more Indigenous representation into the outdoors. We can then influence the space, because culturally as Indigenous people we’re very connected to the land — we are the original land stewards. We took care of the territory, our territories. If we have more representation within the industry, I feel like we’ll be able to put that message out there ourselves, as our own people. I feel that will help in the preservation of our planet, our forests and everything that we have that we love so much.

And it’s not just for us, it’s for all BIPoC, all LGBTQ+ people. It’s for everybody. I hope that the change that we’re starting to see within the industry is going to influence more people to try and actively get into these positions, like snowboard instructing. It’s a stepping stone to get others into the outdoor industry.

On the importance of building up Indigenous women

Our culture was based on a matriarchy. The women were very important. They had very important roles within our communities, but with colonisation that changed completely to men being the main influences in our communities. With a lot of that, women were dehumanised, especially Indigenous women. We weren’t seen as people, so there was a lot of abuse.

We feel that together, as Indigenous women, we are very powerful. If we can lift each other up, hold each other up, then we have it in us, in our bloodline. We are very strong and we are very resilient. That’s why we have women, and people who identify as women, as the focus in our programming. We get asked this quite often as it’s seen as us only reaching out to half the population. But it’s because we need to, we need to influence these women to come into the roles they used to be. They need to be strong leaders because that's what we were. 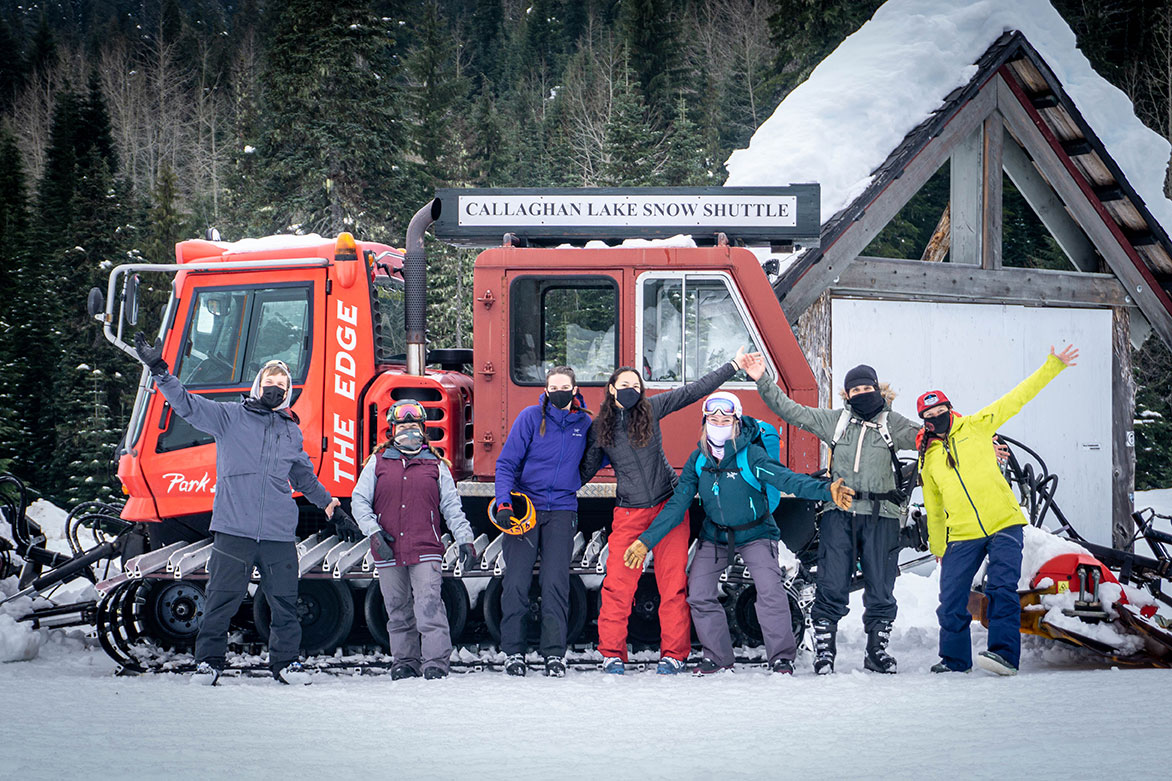 On futures anchored in Indigenous practice and belief

We gain so much knowledge through our stories, our histories and our ancestors on how to take care of the land. We know how to take care of our ecosystems. If that was to be combined with scientific knowledge, it would be unstoppable. We’d be taking care of this planet. We’d forever have our forests to recreate in, to gather our medicines and our foods. We have so much in our stories that has been passed down. In every story that I learn from my Nation there’s new things that I didn’t know before about our territories and the animals on it and how we can better serve them.

On things to look forward to for IWO

We hope that women who have been in previous programs jump in and mentor the next generation getting involved with IWO. For example, next year, all of the ladies from this year can come back and be paired up with a newcomer. They can then teach that newcomer what they learned, whether it’s avalanche training, or nutrition in the outdoors.

We hope to have a fully Indigenous crew. We would like to be able to train Indigenous women in roles we need so that we have fully Indigenous staff. We want to do more outdoor programming. For now, we’re focused on the backcountry in the winter and hiking in the summer, and we do a little bit of mountain biking, but cost is a barrier.

We also have the Indigenous Life Sports Academy (ILSA), which is a completely different program from IWO, but I feel like they mix together quite well. ILSA used to be the First Nations Snowboard Team, but they changed the name to be more inclusive of all the different sports. So many age out of ILSA and there’s nowhere for them to go to further their knowledge, and further that journey with the outdoors. Now we have women that are in IWO that came from ILSA, which is amazing.