In her quest to visit and get to know the parks, Marlis Butcher canoed, kayaked, mountain biked, backpacked, hiked, snowshoed, snorkelled, and trekked by whatever means of travel she could devise
By Can Geo Staff
April 7, 2021

Explorer Marlis Butcher has “bagged” all of the Canadian national parks. In her quest to visit and get to know the parks, Marlis canoed, kayaked, mountain biked, backpacked, hiked, snowshoed, snorkelled, and trekked by whatever means of travel she could devise. In her new book Park Bagger: Adventures in the Canadian National Parks, she shares her adventures, with the objective to encourage others to explore the national parks and to protect Canada’s vast wilderness.

Read an excerpt below:

Early in 2018 I received permission from Parks Canada for my team to walk into Vuntut National Park from the northeast and backpack 35 kilometres through the Declared Wilderness Area to the edge of the Old Crow Flats.

We sat on some larger rocks, observing the vast land around us. It seemed unreal. There was a lone caribou trotting along far down the valley. We watched it disappear beyond the horizon. The land stretched out invitingly before us, drawing us to follow that caribou. But the beauty was deceiving. We’d already experienced the inhospitable wet valley bottom. Furthermore, those dark clouds were rapidly coming in behind us. We had to find a place to set up camp, and soon. 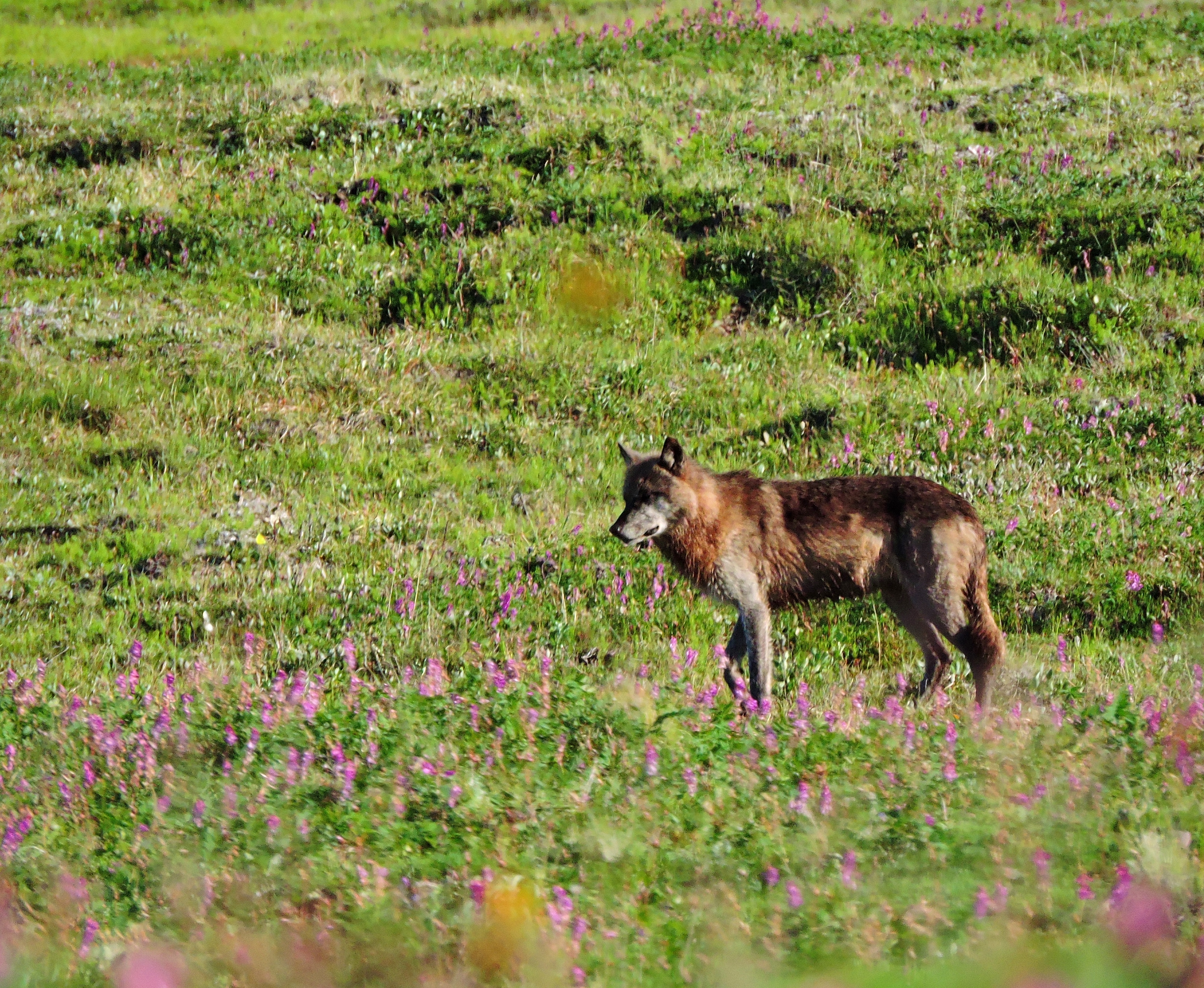 The rain started to fall lightly as we rounded the mountain into the next sloping valley. Within another hour we came upon a rather small spot that wasn’t waterlogged or rocky and was fairly level. This would be our first camp. We gave priority to setting up the three-man winter expedition tent – this thing was designed for the worst arctic conditions. Good thing too that we put it up first, because the wind had picked up as we worked.

By the time we were ready to set up the second tent, the rain was blowing sideways. The strong wind lashed at us, tearing the smaller two-man tent out of our wet grasps. It was impossible to get the tent poles in place. Soaked, cold, and exhausted, we gave up. We stuffed the small tent, along with our backpacks, into the larger vestibule of the expedition tent. This tent had two vestibules, one a square-metre space under the fly at the back of the tent, the other a half-square-metre under the fly at the front.

The wind was so strong that it had driven the rain right through our waterproof clothing. Each of us had become cold and wet, and hypothermia was setting in. Swiftly we piled into the expedition tent, leaving our soaking jackets and waterlogged hiking boots in the vestibule. Unfortunately our sopping wet inner clothes created huge puddles inside the tent. I noted that the guys were shivering. “Unroll your sleeping pad and bag,” I directed Blake. “Strip off all wet clothes and get into your sleeping bag, now.” Shocked at my forwardness, Blake just stared at me. I added: “I’ll face the other way. Just do it.” He did. John, teeth chattering, didn’t argue. He stripped down and slipped into his bag. Me next. So there we lay, the two men with me in between, in a space slightly wider than a queen-size bed, settling down for a one-hour nap.

Our winter sleeping bags were cozy and warm. We settled. One hour became two as we stared up at the bright yellow roof of the tent, the nylon billowing under the force of the wind. During that “nap,” I was planning ahead: we’d have to eat something hot to avoid going into another physical crisis. But where to boil water? We couldn’t risk going out into the storm again. Besides, we’d never get the kitchen tarp up and a stove started in that wind. We had no choice: we’d have to boil water in the small vestibule of our tent.

Shifting around inside the tent required a coordinated effort. The endeavour was made all the more complicated because we were each wearing only underwear and our sleeping bags. Like checkers on a board, only one person could move at a time, and somebody had to get out of their way first. I nudged to the front of the tent to open the small vestibule and pin the flap open away from the wind. John moved to the rear to get his stove, fuel, and water bottle from his pack in the large vestibule. Blake sat as close to the side of the tent as he could and passed the equipment forward to me. I set up the single-burner gas stove on the only flat spot I could find under the wind protection of the fly. Then I traded places with Blake and again with John, and then John with Blake, so that I was in the back to get the kettle out of my pack and John was up front to light his stove. I passed the kettle forward, Blake filled it along the way and John placed it on the stove.

But the stove, though tested before the trip, wouldn’t start. So I dug out my stove and passed it up to John, who passed his dead stove to me in the back. With relief we got the second stove started!

Blake and I traded places again so that Blake could dig three pouches of freeze-dried dinners out of his pack. John is vegetarian, but he wasn’t going to go through the trouble of getting to the back of the tent to get one of his dinners from his pack; he’d put up with meat that evening.

These dinners are designed to be eaten right out of their bags: just add boiling water, stir, and wait a few minutes for the precooked food to reconstitute. But we found that the kettle only held enough water for two dinners – we had to go through the whole checkers routine again to prepare the third dinner. Finally the meals were ready, and they tasted oh so good. There were no leftovers that night.

We folded up the empty food pouches into a special “smell-proof ” plastic bag and then into one of our bear-proof Kevlar bags in the large vestibule. Yes, we had cooked, eaten, and then stored food inside the tent. This was a big “no-no” in the wilderness because the food smells could attract animals. However, we’d have put ourselves in greater danger, of hypothermia, if we’d attempted to get the food outside, away from the tent. The wind was still howling and the rain pelting down when we finally called it a night. 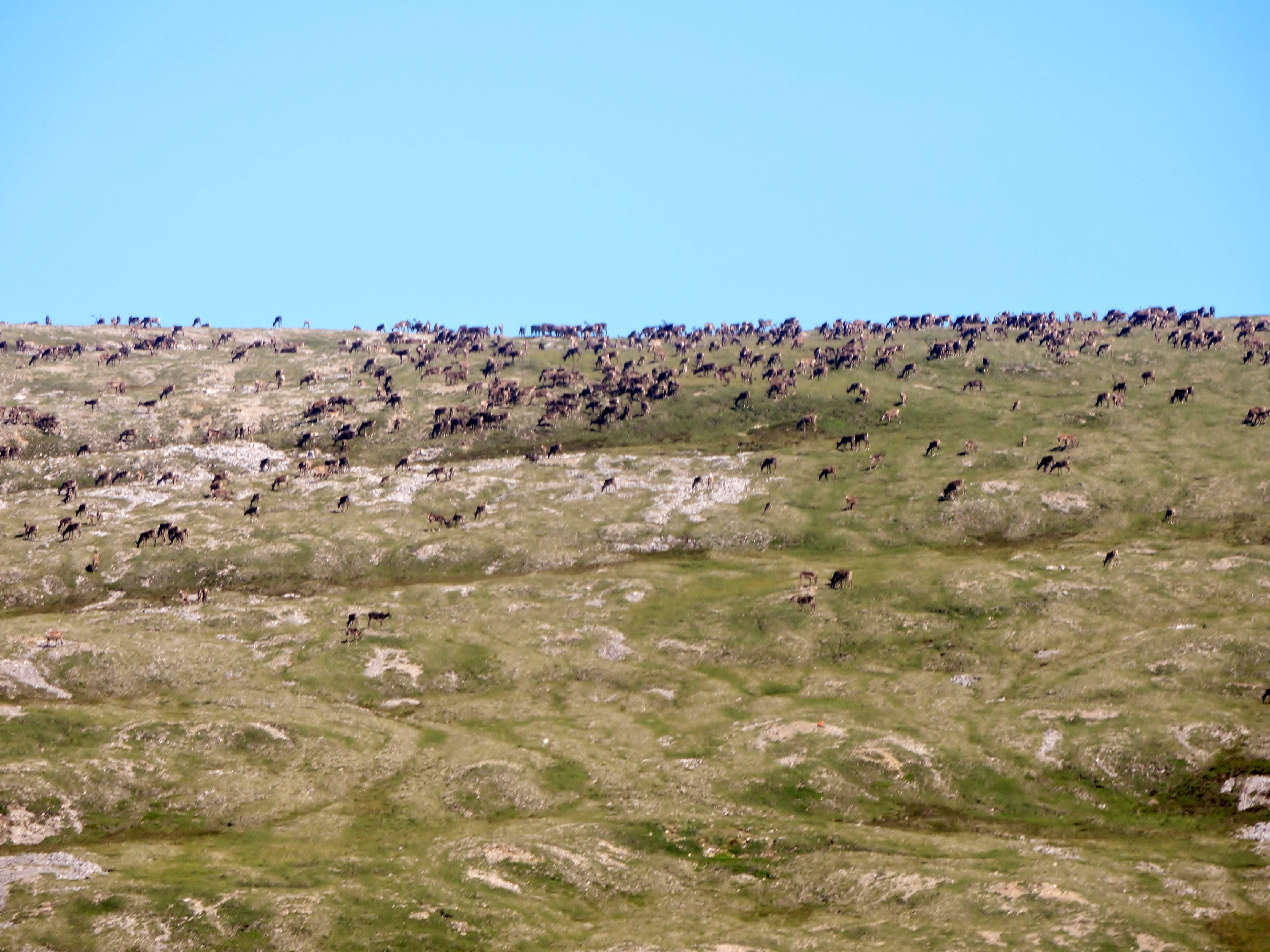 By morning the rain had subsided to a slight drizzle. I waited as long as I could, but eventually I had to go out to pee. The guys would have to move aside so I could get out the door. However, first I had to dress, and my clothing, stuffed into the tent’s inside pockets, was still soaking wet. There was nothing I could do about it. I sighed “Damn, that means I have to put my pants back on.” John and Blake burst out laughing – anywhere else such a statement would have had a totally different connotation. That sentence became the running joke each time we had to give each other privacy throughout the trip.

When I got back into the tent I stripped off again and crawled into my warm, dry sleeping bag. Together we went through the crazy checkerboard procedure again, to make coffee and instant oatmeal for breakfast, inside the little tent. The rain ceased while we were cleaning up, and slowly the clouds dispersed. We had bright sunny skies for the rest of our days (and nights) in Vuntut.