A conversation with filmmakers on how they captured this unique ecosystem, on screen.
By Abi Hayward
November 13, 2020

It’s difficult to protect an ecosystem you can’t see. Especially when that ecosystem is deep underwater, was only discovered in the 80s and the charismatic animal in question is a sea sponge. With towering delicate structures composed of living silica growing on the darkness of the seafloor, glass sponges are notoriously difficult to study — and convince people to care about.

When the glass sponge reefs of B.C. were discovered in 1987, it was the spongiology equivalent of realizing that T. rex wasn’t extinct. But because of how deep they were underwater, researchers couldn’t show them to the world. Now, this fragile invertebrate has found itself a champion in a ragtag group of citizen scientist scuba divers, who have made it their mission not just to document the sponge — but protect it. These sponge defenders are the stars of a new documentary that shows the underwater world of glass sponges in high resolution for the first time.

Canadian Geographic sat down virtually with filmmakers Nate Slaco (director) and Bryce Zimmerman (cinematographer) to see how their film Moonless Oasis came together to show the world of glass sponges — and the glass sponge people — in a whole new light.

On how it all started

Slaco: I was chatting with one of the workers at my building and I found out he was a scuba diver. He was telling me about his friend Hamish Tweed, who was doing this project on the glass sponge reefs. And he showed me some pictures and just... you know, me being a non-diver, it just looked like this insane alien life form. I was curious and I had to learn more.

Zimmerman: When you watch documentaries about exotic things in exotic places, it's hard to think that you might have that here [in B.C.] as well.  But then there's this world, that is very unique to the world itself, right here. And just finding that out was like pretty nuts. The task we put on ourselves was to make sure that we could show it in a way that was a lot more impressive than maybe it's been seen before — because it is so hidden. 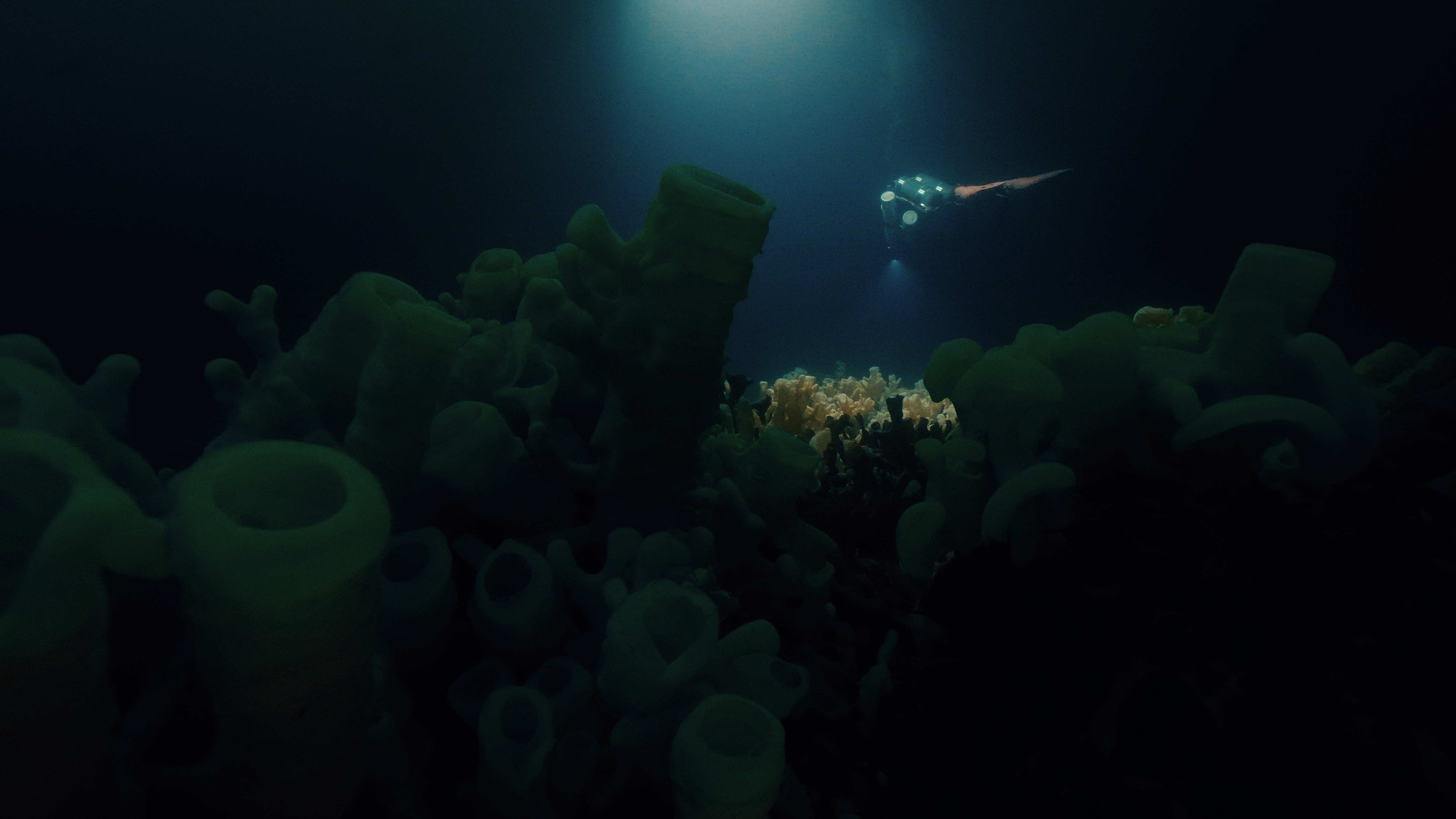 On the challenge of underwater cinematography

Slaco: We were pretty new to that world of shooting underwater. So Hamish, the main diver on the research team, brought a lot to the table. He was kind of doing his own cinematography, he had a GoPro attached to his [underwater] scooter, he was already recording a lot of his dives. And he did have an eye for what makes a good shot. Bryce kind of took him through a cinematography course — and then we just gave him a better camera.

Zimmerman: The fact of the matter is that we obviously can't go down there — like I'm a professional cinematographer; [Hamish is] a professional diver — it's a lot safer for him to learn to shoot than the other way around. He had developed his own style of lighting down there so that you could really see the space. The tough part is that doing anything that deep under water just gets complicated, so there were a ton of setbacks. We originally had planned to do three dives: we only got usable footage on dive six and dive seven. So clearly not simple as we thought. There were a lot more challenges than we expected.

Slaco: It's also a struggle because the deep dives we were doing — it’s a very slow cumbersome process just setting it up and planning it out. And there's no guarantee if they go out that day that they'll actually be able to dive, or that the conditions will be good underwater.

Zimmerman: Yeah — the first time around, the camera was turned off. (laughs)

Slaco: I mean, we feel like most things that could have gone wrong, went wrong. Honestly, that's part of the process — we can laugh at it now.

On how filming was affected by the COVID-19 pandemic

Slaco: We shot up to about mid-March when we got shut down. That actually gave us a moment to pause and reflect and regroup a bit — because at that point in time, that's when everything had gone wrong. Bryce and I were probably not in the best place. So that allowed us to look at what we had and see what we needed, and then we shot from June for maybe another month. But that was honestly the best time ever. Because one of the first shoots we had, it was a beautiful day out there — which doesn't necessarily translate underwater, obviously — but they got down there. Bryce and I...  once the camera's out of our hands, anything can happen. But they came up. They said it was a 100 foot [visability]. The camera was still working. We turned it on. We looked at it when we got home. And yeah... we got probably the most footage on that first day, those two days. It was just —oh!— The best feeling in the world.

Zimmerman: We wouldn't have a film if we hadn't got that footage. And it’s probably the only high quality footage that exists of Lost Reef — I think that only 10 people have gone to Lost Reef ever. So people are getting a viewpoint into something that few people have seen in real life. It's pretty fascinating. 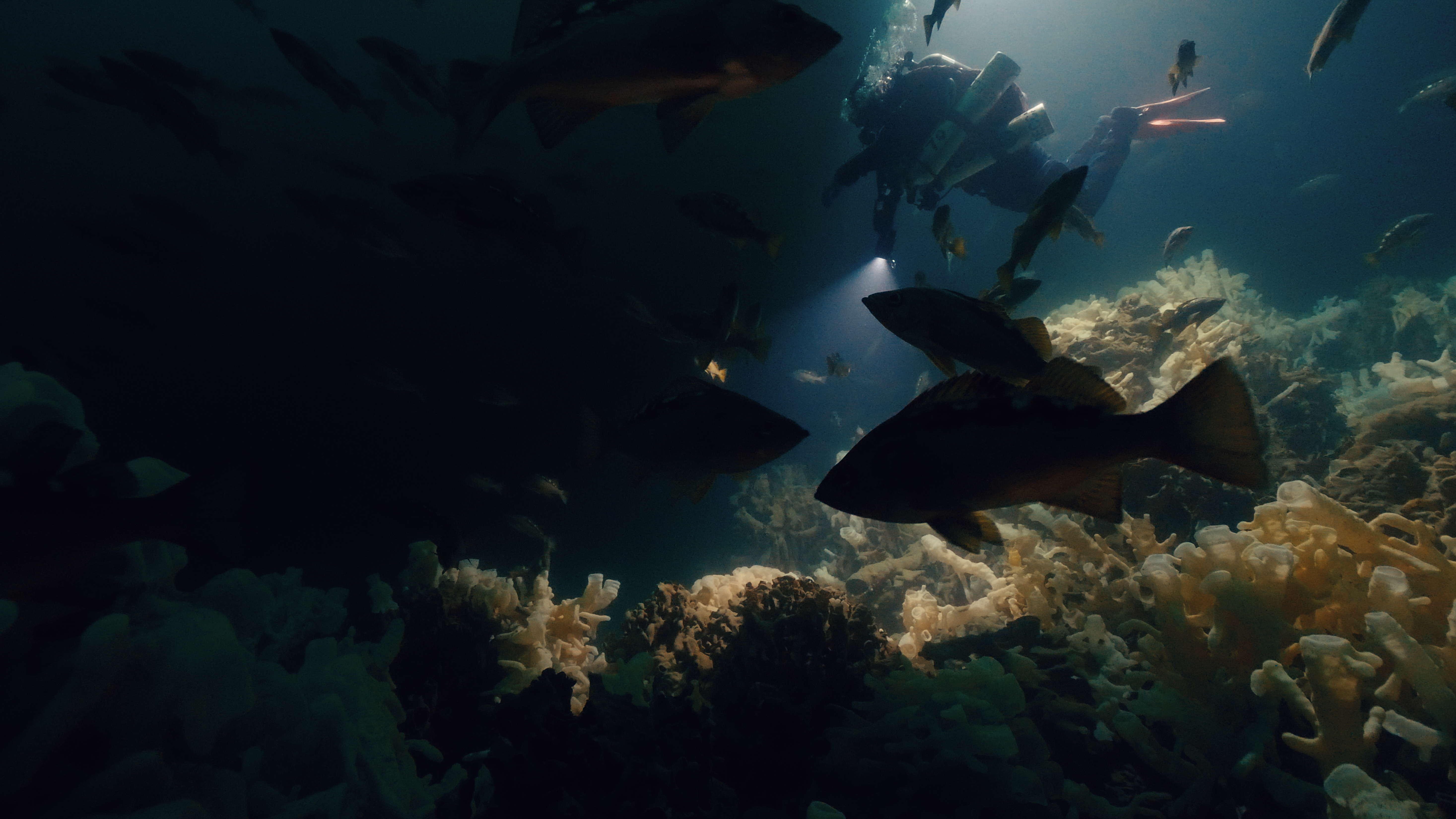 The glass sponges loom out of the darkness into the light of diver Rebecca Barrett as she explores Lost Reef (Photo: Perpetuum Films / Moonless Oasis)

Zimmerman: I think we were kind of losing it a bit.

Slaco: Especially after all those failures. We'd seen pictures of [the reef] but having a nice camera, having the lighting, having the visibility and just seeing what they were able to pull off was just the best feeling in the world.

Zimmerman: Yeah, it definitely felt special. It's funny because me and Nate shoot a lot of film photography — but with this, you set it up, it comes back and you have no idea what you're going to get… it's almost more exciting that way.

Slaco: That's the thing: we see the footage and it's showing the divers and they're freaking out and everyone's like, “this is the best we've ever seen it, there's so many fish.” Everyone was excited because that's never happened before. So it felt very special from the start. 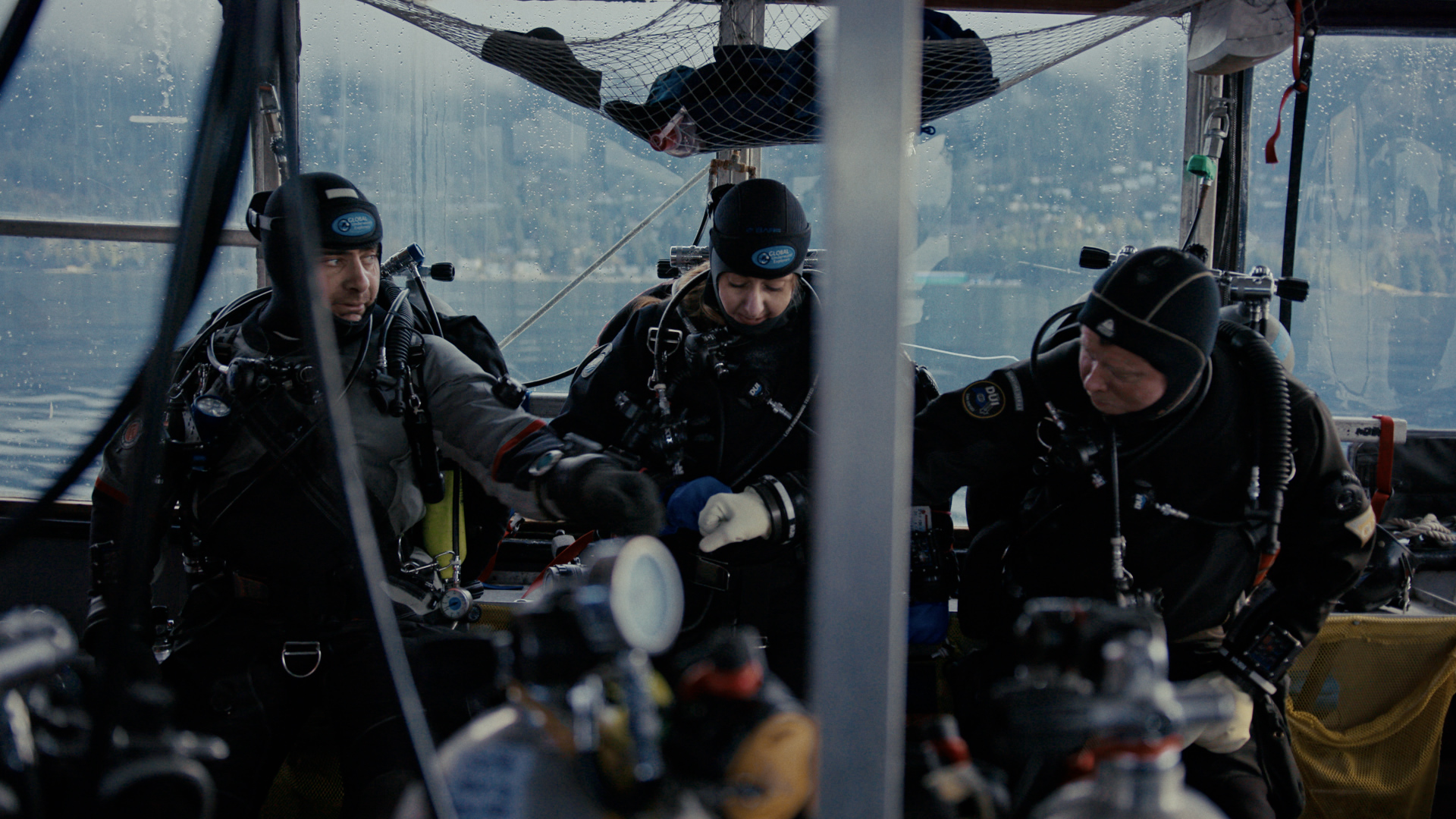 On the citizen scientists advocating for the sponges

Slaco: I feel like we kind of lucked out — we didn't really struggle with directing them too much. Bryce and I made the decision that we didn't necessarily want to make the story a scientific story about why sponges are important; we wanted to tell the story through the eyes of these people, why they think it's important and why they're so passionate to spend their time and money risking their lives to explore and protect these things. I feel that hopefully will help people, who aren't necessarily interested in the ocean, relate to that.

We basically found out that if you're going to go out and do this stuff, you're going to need a character ... like Glenn mapped the bottom of Howe Sound for 10 years by himself. That's not the most normal thing to do as a hobby! It's amazing. It's been super helpful. It's a huge contribution to the world. But, you know, I think someone who put that on themselves and builds homemade drop cameras and homemade technical instruments is just, by their nature, going to be an interesting person. And so all of the people that do this stuff are relatively interesting people. Jeff was great because I don't think Jeff can not be Jeff. It doesn't matter if the camera's on him or not, he's exactly the same person. And so that's the best you can ask for, I think.

Zimmerman: It kind of took us a little bit, too, to understand just how dangerous it was [for them to go down there] and just the fact that they are at life's edge at all times — it’s like life or death. And these people aren't doing this for a claim or for fame or for recognition persay; they're doing it for the sponge.

On what they took away from making the film

Zimmerman: The biggest takeaway for me is probably that you can go out and do something like this and make a difference in the world just by sheer force of will and perseverance. That whole team, that's all they do. And over time, you know, that group of people care enough and they have made a difference in being able to protect these areas. I don't know how much people are aware of what kind of work is being done like this. But if you care about the world you just go out there and make a difference. You'll don't have to wait for someone else to do it or to go through some sort of big organization. You can literally find something in your backyard and protect it.

Slaco: Building off what Bryce said, obviously this is a very B.C. unique thing, but, you know, every pocket of the world has something special about it. And you can hopefully relate what's happening here to what is in your backyard. It can sometimes feel futile, everything that's happening in the world. But the fact that these people have persevered and really, you know, every weekend, some times week day, going out there. Obviously, they enjoy what they're doing but just continuously doing that, I think that's really powerful.

On their glass sponge subjects and communicating that fascination

Zimmerman: There's this quote that I always remember that “wonder is the absence of interpretation.” And it's kind of like that moment when we first were first learning about the sponges — you always have to come back to and understand that feeling. And for us, you know, we were learning that [the sponges are] just living dinosaurs, underwater. There’s a story of the German researcher who was studying the fossilized remains of the glass sponges when they were discovered off the coast of B.C. I guess he just wept; he just cried because clearly it's like someone had opened up a cave and found this lost world. That's basically what we have here. And I think that part of it is what we're trying to communicate — just how wild and how special this is, because that's not normal to have this. There's not really any other place in the world that has something similar.

Moonless Oasis premiered on CBC’s Absolutely Canadian in British Columbia and Alberta, and is now available to stream on CBC Gem.