Canadian Geographic cartographer Chris Brackley continues his exploration of how the world is charting the COVID-19 pandemic, this time looking at how artistic choices inform our reactions to different maps
By Chris Brackley
April 21, 2020

Maps are rarely a story in and of themselves. They’re usually found tucked within a narrative to help qualify the story’s scope, scale and extent. That was not the case near the beginning of the COVID-19 pandemic, when a fundamental misinterpretation of a map posted by the WorldPop project at the United Kingdom’s University of Southampton created headlines such as “Horrifying new map reveals no country safe from coronavirus’ deadly tentacles.” 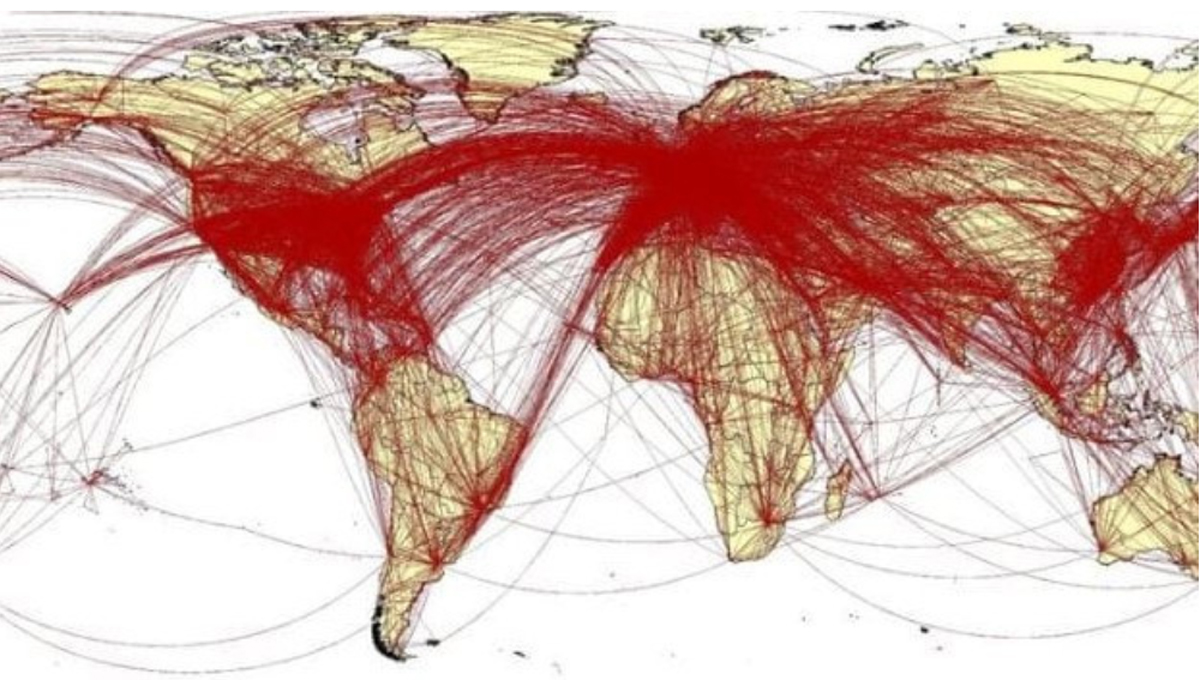 Let’s put aside the fundamental flaw in connecting this map to the spread of COVID-19 — the fact that this is simply a map of global air travel, which, because it was included in a post about the movement of residents of Wuhan in the two weeks before the region was locked down, was misinterpreted by several news agencies as showing the movements of millions of Wuhan residents who fled the city. Instead, let's focus on the immediate, visceral reaction that this map creates.

The density and intensity of red lines covering virtually all of the populated surface of the planet are panic-inducing. They make one feel a real sense of dread and doom. It feels like nowhere is safe, that the “deadly tentacles” are almost reaching out to grab us.

In truth, the data representing the actual spread of the virus during the last few months may well have had just as many tentacles, but to map this data well, cartographers have to strike a balance that tells the story in visual proportion to its reality. This “cartographic intensity” is driven most fundamentally by the colour and the size (and resulting density) of the symbols representing the data.

The go-to global map for many COVID-19 watchers is the COVID-19 Dashboard by the Center for Systems Science and Engineering at Johns Hopkins University in Maryland. 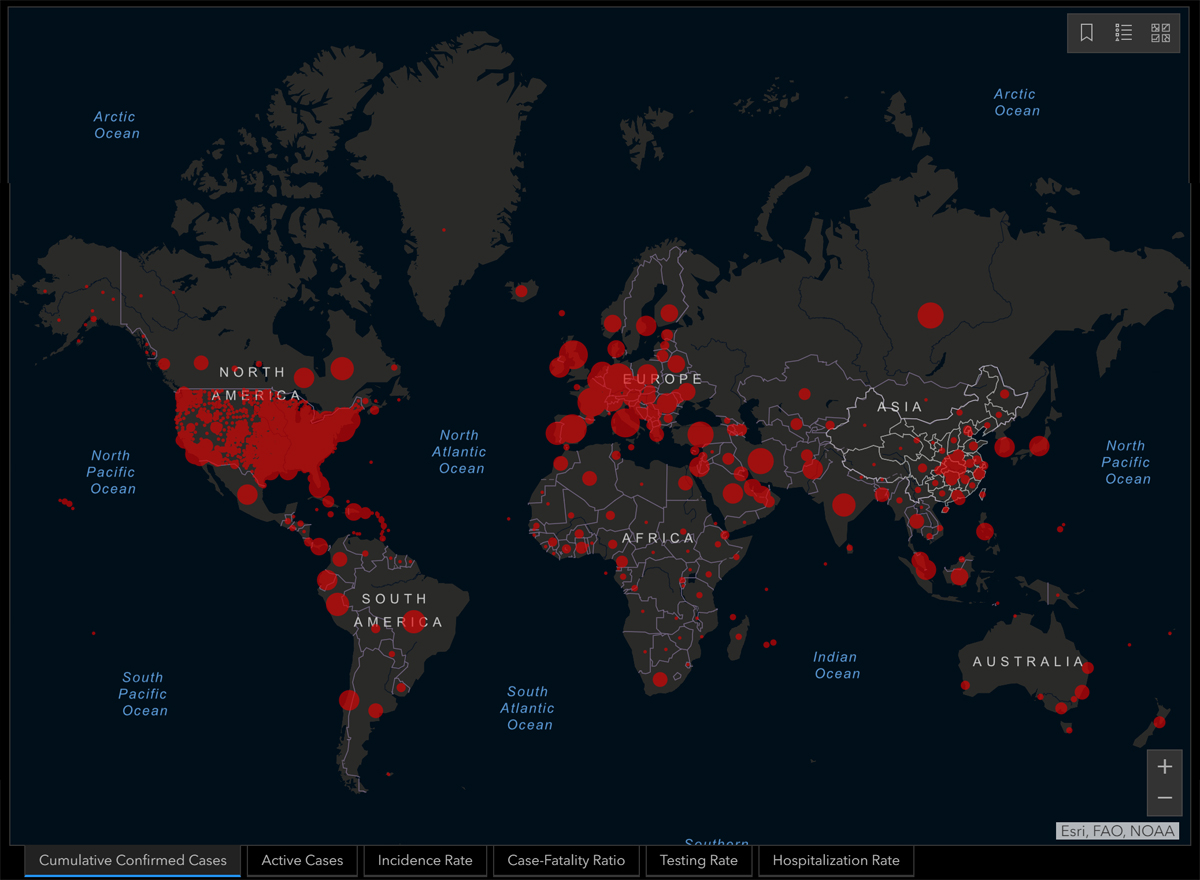 This map seems to follow many of the alarm-raising precedents of the air travel map. COVID-19 cases are shown as densely packed gangs of red circles, dominating Europe and the eastern U.S. Though there are aesthetic and design reasons to choose a black background, there is no doubt that dark maps feel heavier than the airy and open feeling of a light or white-based rendering. And red — though a great cartographic colour choice to represent data simply because it’s punchy, contrasting and stands out from all background colours — will always be associated with danger, heat or fire. It’s the warm colour, and when it’s used for proportional circles you can’t help but get a feeling of a spreading fire.

If we change the colour of the circles, does it change the feeling of the map? 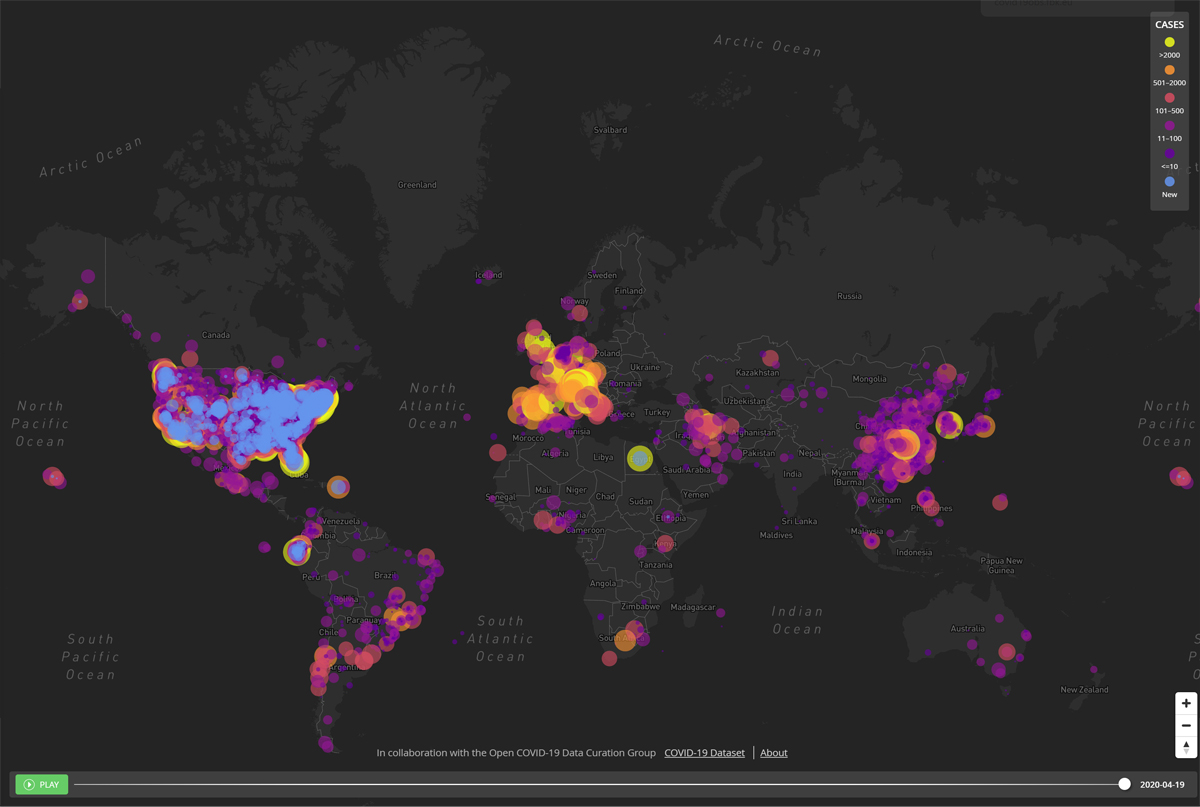 I would argue it does. This HealthMap from Boston Children’s Hospital feels brighter and more optimistic, as it blends the warm colours of yellow and orange with cooler colours of purple and blue. That said, the density of the circles on this map is even more intense than those of the Johns Hopkins map. And while I really like the inclusion of the blue circles representing new cases, their density is overwhelming at this global scale. Part of the challenge with interactive, online mapping is that cartographers have to wrestle with the reality that maps change as users zoom in. As a user zooms into this map, the land gets larger, while the circles stay the same size and get more spread out. The result? The density appears to decrease. It may well be that there’s a perfect scale where each of these maps speaks best to the reality of the data each is trying to represent, but in both cases this is not the scale of the whole world.

Google has stepped down the colour intensity on its own COVID-19 map, heading right to the cool and comfortable palette of blue on blue. 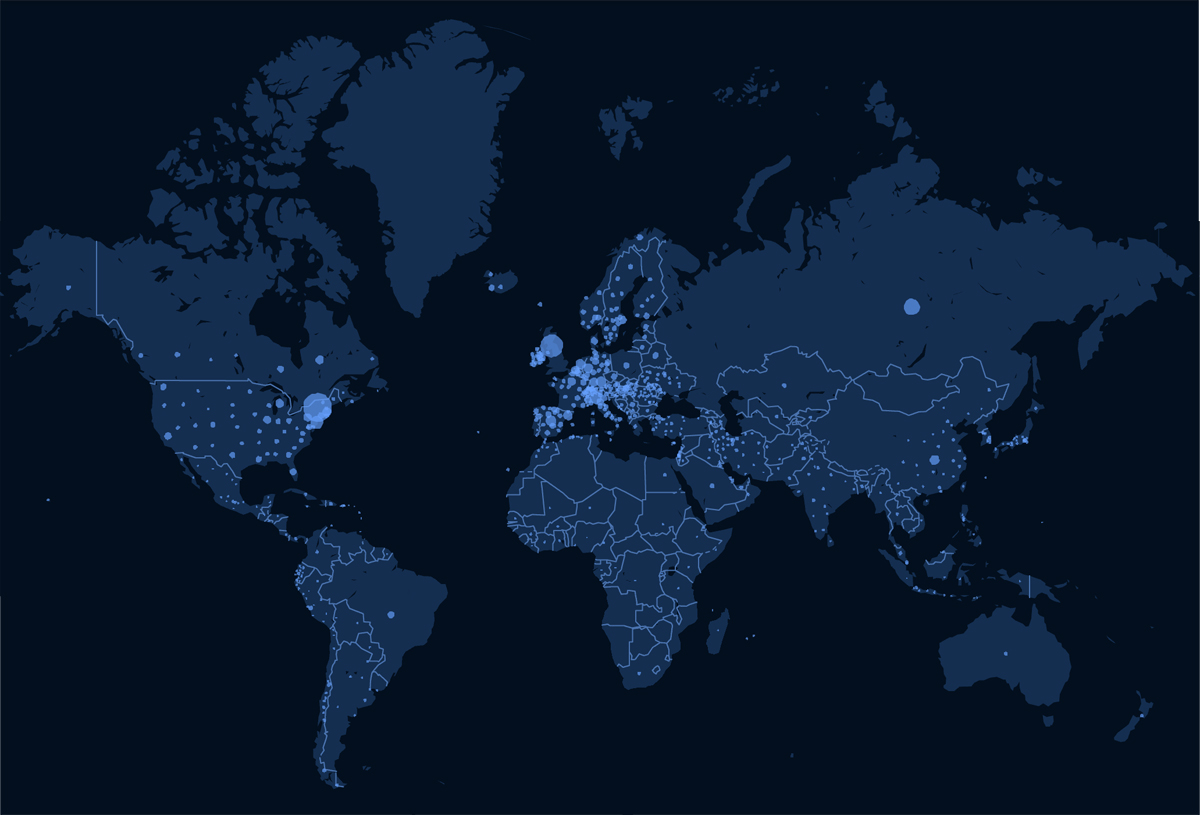 But they’ve gone even further to mitigate over-exaggeration of the global story by designing this map so the proportional circles are relatively smaller when zoomed out, then increase in size as a user zooms in. This means that at a global scale, the density of the pandemic is rendered much more in line with its relative proportions. On this map, you can pick out New York City and the United Kingdom as real concentrations of cases of COVID-19, and get a sense that Europe as a whole currently has the greatest regional density and spatial spread of the disease.

The World Health Organization has also chosen the calming palette of blues, but rendered them on a light-coloured map. 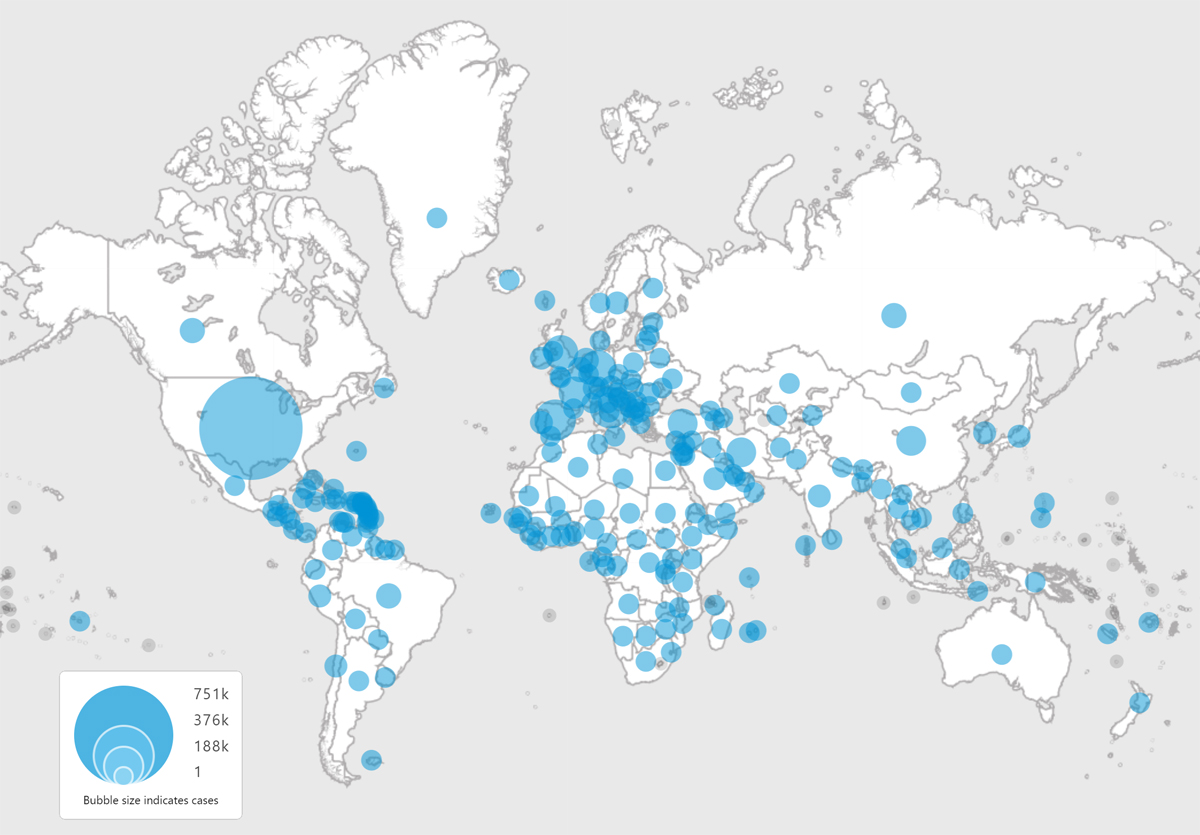 This is not a map that gets your heart rate up, and is a good comparison with Google’s map to get a sense of how a dark map makes you feel versus a light map. Arguably, from a colour standpoint, this map may have swung too far in the other direction, not creating enough of a sense of urgency. Density-wise, this map does a reasonable job of showing the relative spread across the planet, but ultimately does a poor job of scaling the relative sizes of the circles (a circle representing one case is nearly the same size as another representing 188,000 cases!). The result does not honour the data, in that most countries have circles that are relatively too large (representing a range from one to a few thousand cases, but being quite large), taking them too far proportionally from the numbers they are meant to represent. This over-emphasizes locations with few cases, and makes the differences from country to country almost impossible to see.

A map that may have struck an ideal balance of density and intensity comes from The New York Times. 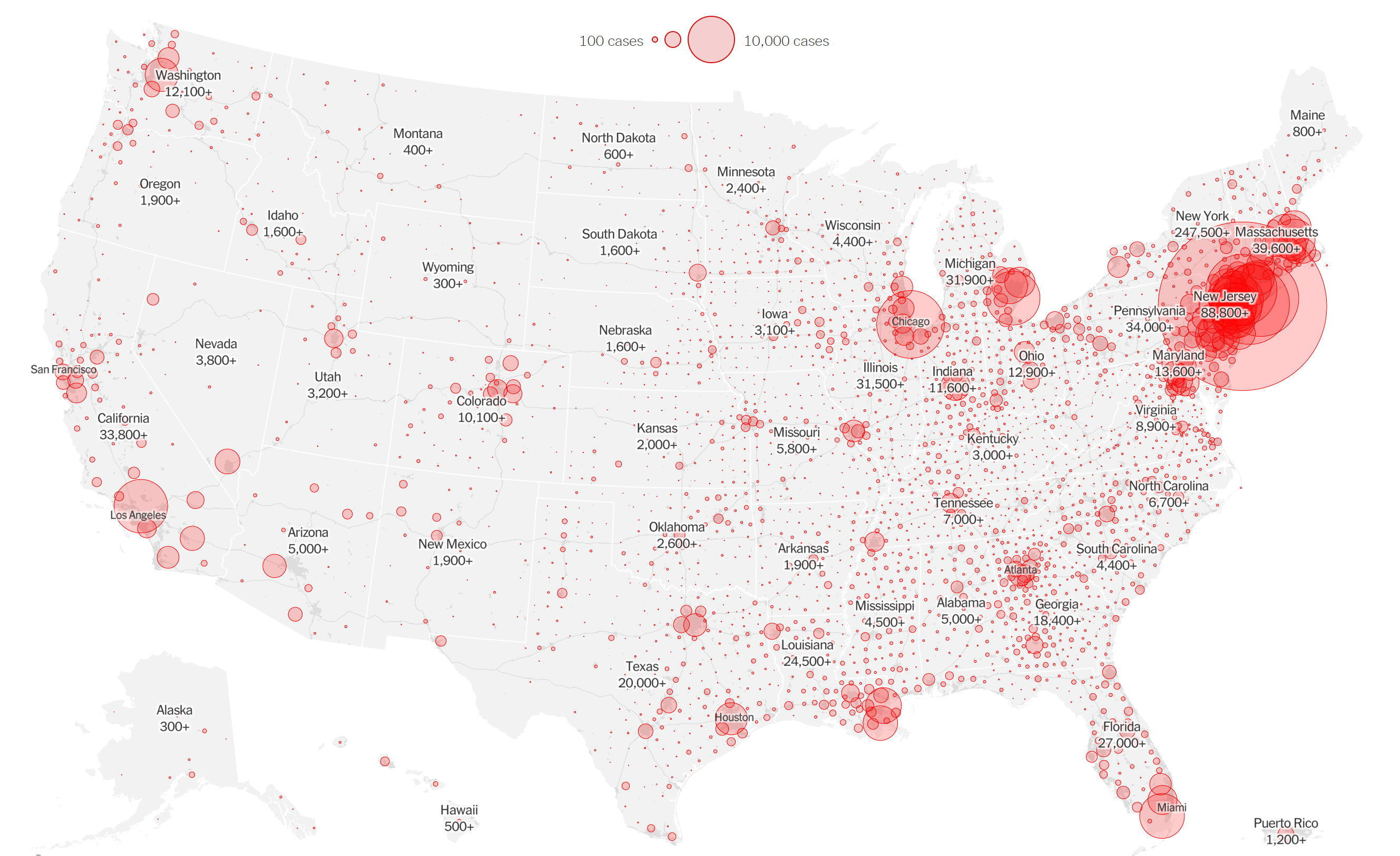 This map feels lighter thanks to its light background, but still uses red for the circles to make clear that this story has urgency. It uses circle sizes that seem to relate well to the actual numbers, where a single case is microscopic and thousands of cases become quite large. Further, each circle is transparent and so wherever multiple circles overlap, the red becomes darker. Though this technique was used in many of the other maps above, the other maps reached their darkest colour as soon as two circles overlapped, and therefore subtleties in relative density cannot be seen. Here, the darkest red is reserved for the truly dense reality of COVID-19 cases around New York City, where many large circles overlap.

So, it seems that cartographers have many tricks up their sleeves to bend data to tell the story they want to tell. All of these maps use much the same information, but have grouped, coloured and sized it differently to leave the map reader with different impressions. Cartographers, it has always seemed to me, are akin to journalists. We are storytellers who bend our maps to elicit feelings and imply interpretations.

More from Chris Brackley on mapping the pandemic:

• What are maps really saying about COVID-19 in Canada?

Thank you for being among the many thousands of readers who visit Canadian Geographic’s website each month. Our publisher, The Royal Canadian Geographical Society, happily makes this content accessible for free as part of its mission to make Canada better known to Canadians and the world. But we need your support to keep going. If you’ve enjoyed what you’ve read here today, consider subscribing to our magazine or making a one-time contribution of $25 to help us continue to bring you the best of independent, high-quality, made-in-Canada journalism, photography and cartography.