The painter and graphic designer discusses his roots, his craft — and his new collection of artisan canoe paddles
By Jack Zimakas
June 22, 2021

Patrick Hunter is a two-spirit Ojibway artist known for his Woodland art-inspired paintings and graphic design project. He has drawn attention to his Indigenous heritage through high-profile corporate collaborations that include the creation of the visuals for the Chicago Blackhawks’ land acknowledgement video. For National Indigenous History Month, Hunter partnered with Toronto-based Canada Canoe Paddles to design four artworks to adorn a limited-editio release of 300 paddles — a maple leaf, a feather, a hawk and a turtle. Hunter reflects on the project’s inspiration and connecting with his Indigenous heritage through refining and teaching his craft.

On his style and influences

Woodland art refers to the rough region of northwestern Ontario where it came out of. “Woodland” is not a culture; it’s just an art movement. The Ojibwe, the Oji-Cree and the Cree, they’re all part of Anishinaabe. There’s different dialects of French, but it’s still called French. There’s 94 languages spoken among First Nations people, and the culture varies — it’s kind of similar but still has its own flavour.

When I was really first getting going, the Canadian Group of Seven — A.Y. Jackson, Lawren Harris — they were big influences on my work, too. I kind of feel like I’m a little bit of a lovechild between the Woodland art form and the Group of Seven.

I grew up in a little town called Red Lake, Ont., seeing his Norval Morisseau’s artwork and other Woodland artists’ artwork as well. Red Lake is kind of ground zero for where that art form really began.

On the project’s origins

Mario [Zeskoski, Canada Canoe Paddles founder] came to me and said, “I’d really love to work with you.” More and more companies are coming onto the idea of reconciliation, but meaningfully — they want to create an impact and work with someone who has a message and a reason for the work that they’re doing. The paddle hasn’t only been used by Indigenous cultures for thousands of years, but also by other cultures to get around. It tells a story in itself: the importance of mobility on lakes and streams. 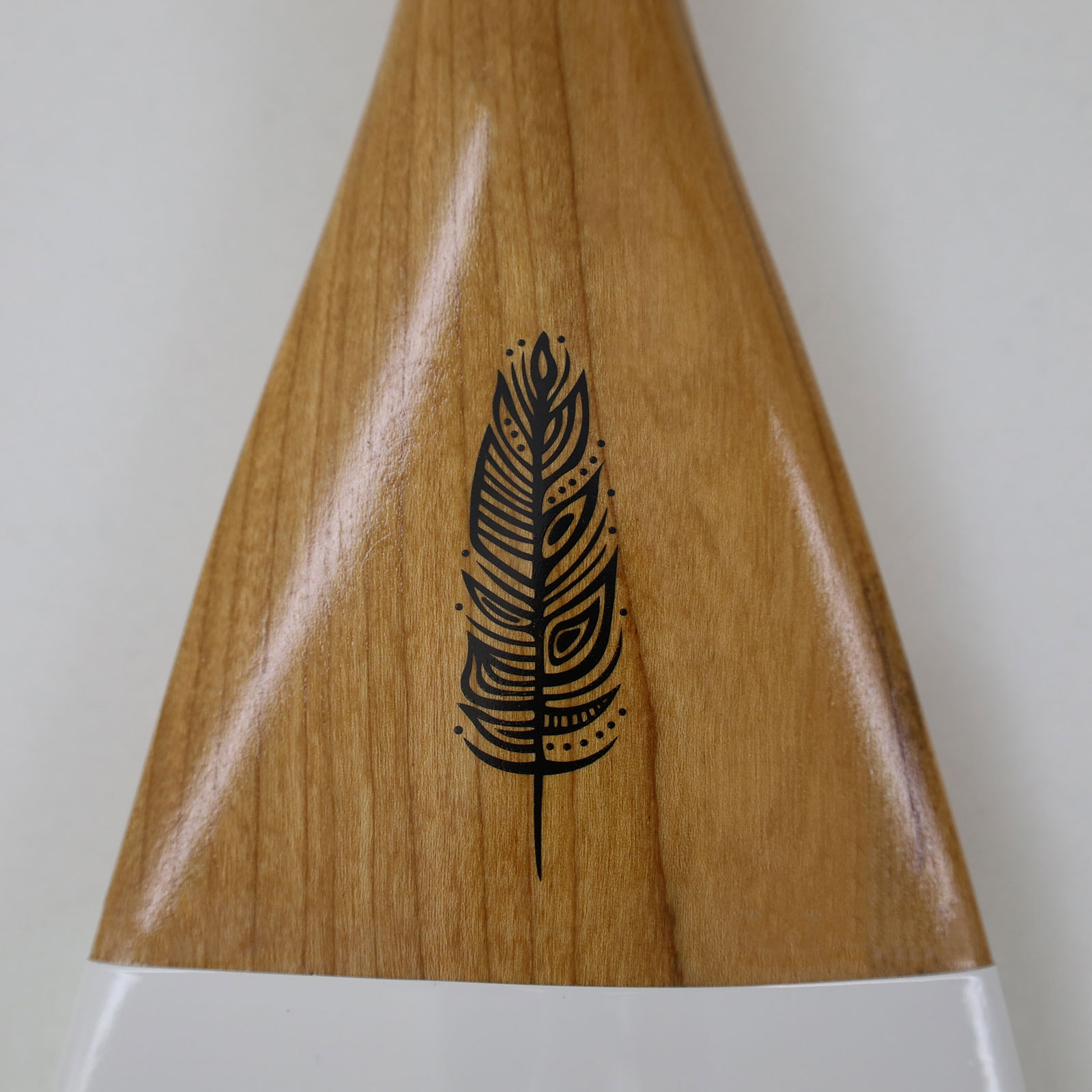 On the design process and symbols

All of these designs started out in a sketchbook between seven and 10 years ago, and were then turned into paintings. I then digitized them. The process for these paddles was silk-screening.

I do love being Canadian, I think it’s a wonderful place to live. Do they always get everything right? Not all the time. But in saying that, it’s always been my mission and my goal with artwork to at least start a conversation and not shame people into understanding what they don’t know about. Since 1492, Indigenous peoples have endured oppression. And that message is kind of subversively passed along through something that is recognizable, like a maple leaf.

The feather’s sort of my logo. In my community, and most Indigenous cultures, we believe that [the eagle] carries the prayers of the people to the Creator. Whenever you find [a feather], or are given one, it kind of just means that you’re on the right path in life.

I like to tell that teaching to people because it’s important to share the culture, but in a way that’s not shaming you for what you don’t know. Not everyone’s as well-versed as the next guy. So however I can get the work out there and put it on things in a public way that inspires people to ask questions, I think I’ve done my job.

The hawk has always been not a key figure, but kind of like the eagle’s little brother. The significance of the hawk is that he’s able to foresee danger and look out for the community, and that’s sort of his role. In a lot of cases as well, art for the sheer enjoyment of doing art is what I do sometimes, so initially I think it started out as, “Yeah, I wanna do a badass painting of a hawk.”

In my culture you’re identified by family clans. The turtle is one of the teachers, philosophers, thinkers, artists, and that’s the clan that I belong to. So turtles pop up in my work quite often.

On how he hopes people will react to this collection

I really hope there’s at least some inquiry: What is on this paddle? How do I know more? There’s links on the collection’s web page to my own website, so people can get to know a little bit more about me and my work. 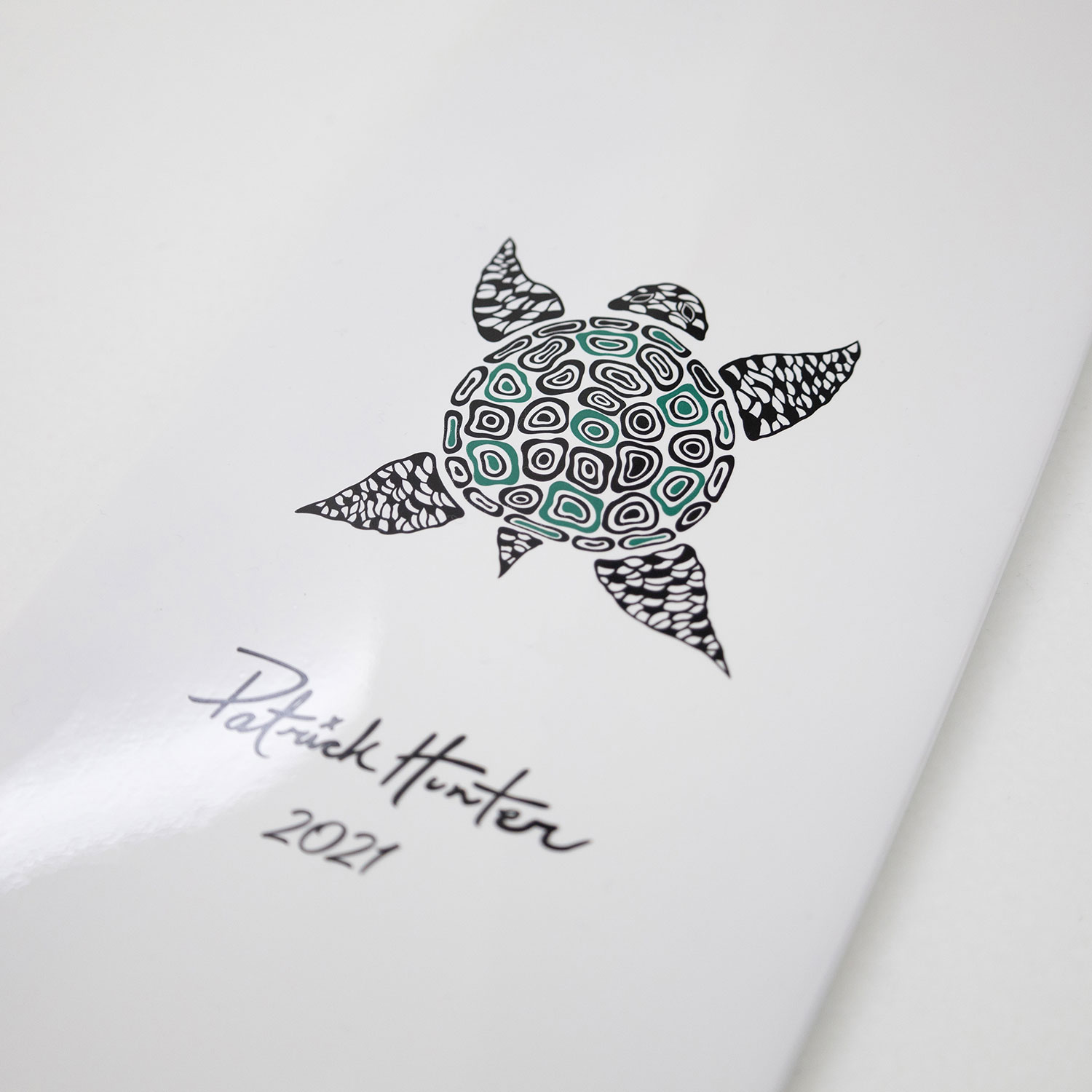 On his workshop initiative, which is supported by a portion of the project’s sales

I want to give the gifts that I have to other people and put the paintbrush in their hands, hopefully inspiring them to take a look at what I’m doing and try to do that in their own way.

Being able to offer some of these workshops for free would be awesome. I used to be a traveling artist; the last place I went to was Fort St. John in March 2020, before the pandemic hit. And it blows my mind that I’m paid to go out to these places to go paint with people.

But then everyone was stuck at home. I realized that not everyone has worked from home before, and there was a lot of stress and anxiety about, “What do I do to keep these kids happy? What do I do to keep myself happy?” So I started doing workshops for free on Facebook. Then I started getting requests asking if I could do workshops for businesses. And I was like, “Yeah, totally.” Had there not been COVID, I probably wouldn’t have developed a virtual workshop that’s actually fun and a good teaching tool to educate people about my Indigenous heritage.

The collection by Patrick Hunter and Canada Canoe Paddles is available for pre-order here.