“If this tree could talk:” The fight to save Zhelevo, Toronto’s most iconic red oak

Torontonians are rallying around a campaign to save Zhelevo, a massive red oak believed to have stood in North York since before the city was founded
By Madigan Cotterill
July 7, 2020

Coral Gable Drive in Toronto’s North York is the picture of an established suburb, with tidy bungalows set back on wide green lawns. Yet among its mature maples and oaks, one tree stands out: a sprawling red oak named Zhelevo that from the street appears to have consumed the house at number 76.

Standing 24 metres high, with a trunk circumference of 495 centimetres, the tree is approximately 300 years old, making it older than the city itself. Recognized as a heritage tree by Forest Ontario’s Heritage Tree Program since 2009, the tree is currently protected under the City of Toronto’s Private Tree By-law. The current homeowners are looking to sell the property, and new owners could apply for a permit to have the tree taken down. But a group of concerned citizens is determined to see Zhelevo preserved.

“I don’t go to church,” says conservationist and preservation activist Edith George, “but when that Ukrainian plane was shot out of the air [in Iran]; when Australia was on fire; and now with COVID … That tree is my cathedral.”

As an advisor to the Ontario Urban Forest Council and an expert on heritage trees, George has been advocating for the protection of the tree for more than 14 years. She says you cannot understand the magnitude of the tree until you see it in person. “The fact that you have a specimen like that in an urban setting that has never been felled by the axe, by any of the owners, is just unbelievable.”

Located near Summerlea Park, the Humber River and the Toronto Carrying-Place Trail, the tree could have previously acted as a marker on the historic fur-trading route, says George. “These trees can tell the stories of this land.”

Watch: Edith George explains what Zhelevo means to her

Named by George after the Macedonian word for “roots,” Zhelevo’s branches cover the roof of the home below it, and the tree’s root system has met the building’s foundation, putting the structural integrity of the house at risk. In Ontario, an oak can live for 450 years, says Mark Cullen, an expert gardener and tree advocate. According to Cullen, the tree is in good health and there is no practical reason why it should be cut down.

“It represents every moment in our city's history over the last 300 years,” he says. “For that reason alone, we absolutely have to save this tree. If we don't save it, then what does that say about the citizens of Toronto and the value that we put on our history and the lessons that it teaches us?”

Over the past several years, ACER, the Association for Canadian Educational Resources, has been monitoring Zhelevo. As a non-governmental organization that measures and tracks the effects of climate change, ACER last measured the tree in 2016. ACER says that if the tree were to be cut down and burned, more than 42 tons of carbon would be released into the atmosphere. 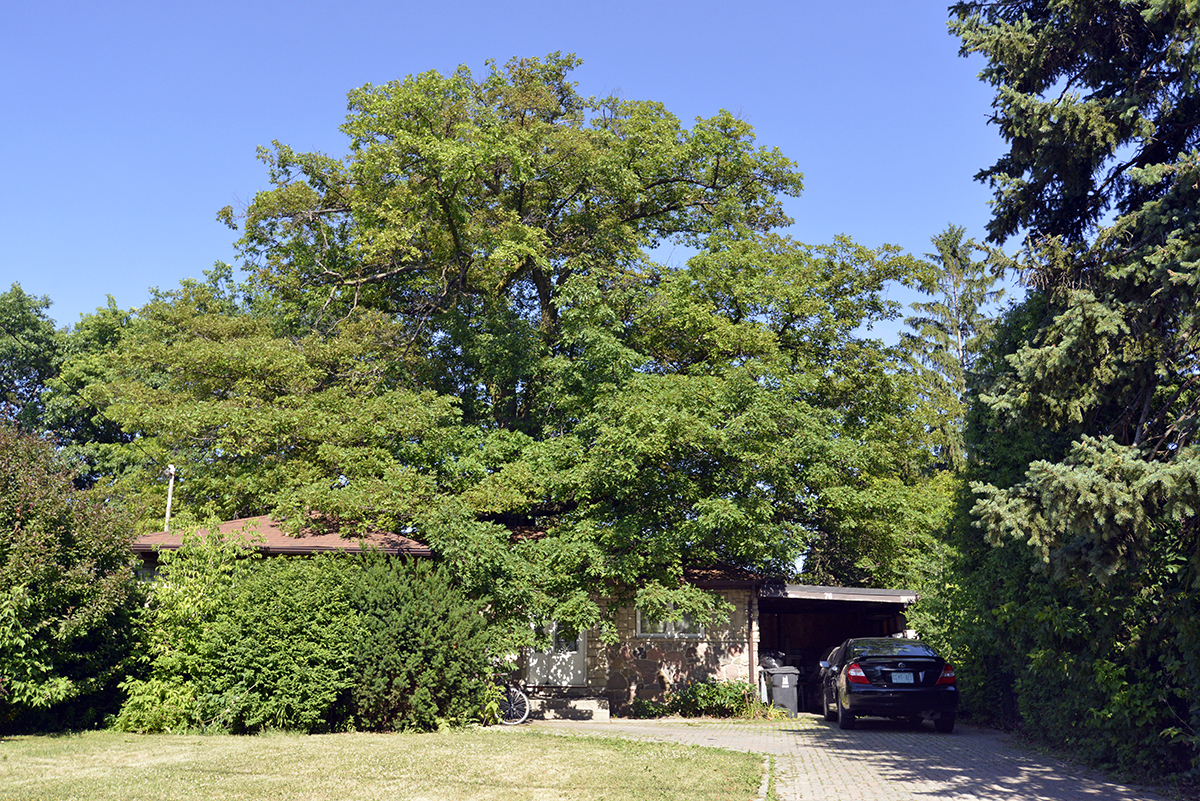 From the street, Zhelevo’s branches appear to have completely overwhelmed the house at 76 Coral Gable Drive. (Photo: Madigan Cotterill/Canadian Geographic)

Now that the property is up for sale, there is a chance for Zhelevo to be properly maintained and preserved.

With the help of George, the City of Toronto has launched a campaign to raise enough money to purchase the $860,000 property. The city has proposed that the plot of land, situated between two houses, be turned into a parkette. The existing house would be taken down and Zhelevo would be the primary feature. In that scenario, the community at large would be welcome to enjoy the natural wonder. The purchase, however, is dependent on Torontonians fundraising half the cost — $430,000 — by Dec. 12, 2020. The other half will be paid for by the city. To launch the campaign, Cullen and his wife Mary made a leadership pledge of $100,000 in late 2019.

In 2017, an oak tree around the same age as Zhelevo was cut down nearby after being deemed hazardous by the city. The wood from this tree is being turned into gifts, such as ornamental pieces by wood carver Trevor Comer, for major donors to the campaign.

The story of Zhelevo has captured the hearts of Torontonians of all ages, including nine-year-old Sophia Maiolo. After seeing a clip on the news about the possibility of the tree being cut down in 2017, Maiolo, then six, decided to help. Since then, she has raised about $2,000 through contributions from friends and family, lemonade stands and garage sales. “Trees are treasures,” says Maiolo.

As of the end of June, a total of $123,357 had been raised — about 28 per cent of the target amount. Although donations have slowed in recent months due to COVID-19, George is confident that the city will be able to raise enough funds to ensure Zhelevo lives on.

“It has survived toxins in the air, water and soil,” says George. “It has always given me hope for a planet that is in peril with natural and man-made disasters.”

To donate or to learn more about the campaign, visit www.toronto.ca/redoak.