Michelle Valberg has been to the Arctic 56 times. The celebrated adventurer, nature photographer and Canadian Geographic Photographer-In-Residence first visited the North in 2009, and was captivated by the region’s beauty and cultures. She has since focused her photography on revealing Northern wildlife, landscapes and peoples to audiences in southern Canada and around the world. Valberg was also inspired to co-found Project North, a not-for-profit organization that has since delivered education opportunities and hockey and soccer equipment to youths in nearly 30 communities in Nunavut, the Northwest Territories, Nunavik (northern Quebec) and Nunatsiavut (Labrador). On Project North’s tenth anniversary, Valberg reflects on the trip that started it all and where the organization is going.

On her first trip to the North

The first time I went to the Arctic, in 2009, I visited Pond Inlet, Nunavut, and went to the floe edge. I spent a bit of time in the community and I saw kids playing hockey. I saw that many people had hockey signs in their windows and I heard they were big Montreal Canadiens and Toronto Maple Leafs fans.

Many years ago, I heard a photographer speak about her time in the Arctic and how she delivered hockey equipment with the Toronto Maple Leafs. So when when I visited Pond Inlet, that clicked. I thought, “I’m travelling back with Adventure Canada in a couple of months, so why not ask if we can take some equipment up with us?” And Adventure Canada immediately said yes.

So when I got back to Ottawa, we held a used-equipment drive, and it was so successful we had too much gear to carry aboard the ship. I approached First Air to see if they could ship it for us, and they were also happy to help. Everybody just said yes, and that made those first deliveries really successful.

At that point, somebody suggested we apply for new hockey equipment from the NHLPA Goals & Dreams fund. They gave me 50 brand new full equipment sets, from helmets down to skates. Then Scotiabank got involved and First Air continued their support. Everybody was being so generous and I had so many amazing volunteers that I formed the not-for-profit. How could I say no to that when everyone kept saying yes?

Project North grew from what was going to be a one-time delivery to multiple deliveries every year, depending on our funding. Over the past five years, we’ve also had this incredible opportunity with Scotiabank and First Air to bring the Stanley Cup to numerous communities along with — this is the best part — retired NHL players: Lanny McDonald, Mark Napier, Marty McSorley and John LeClair, as well as current CWHL player Natalie Spooner. We also brought the kids tablets donated through another non-profit, Rumie. (One of Project North’s directives is to provide educational opportunities.) 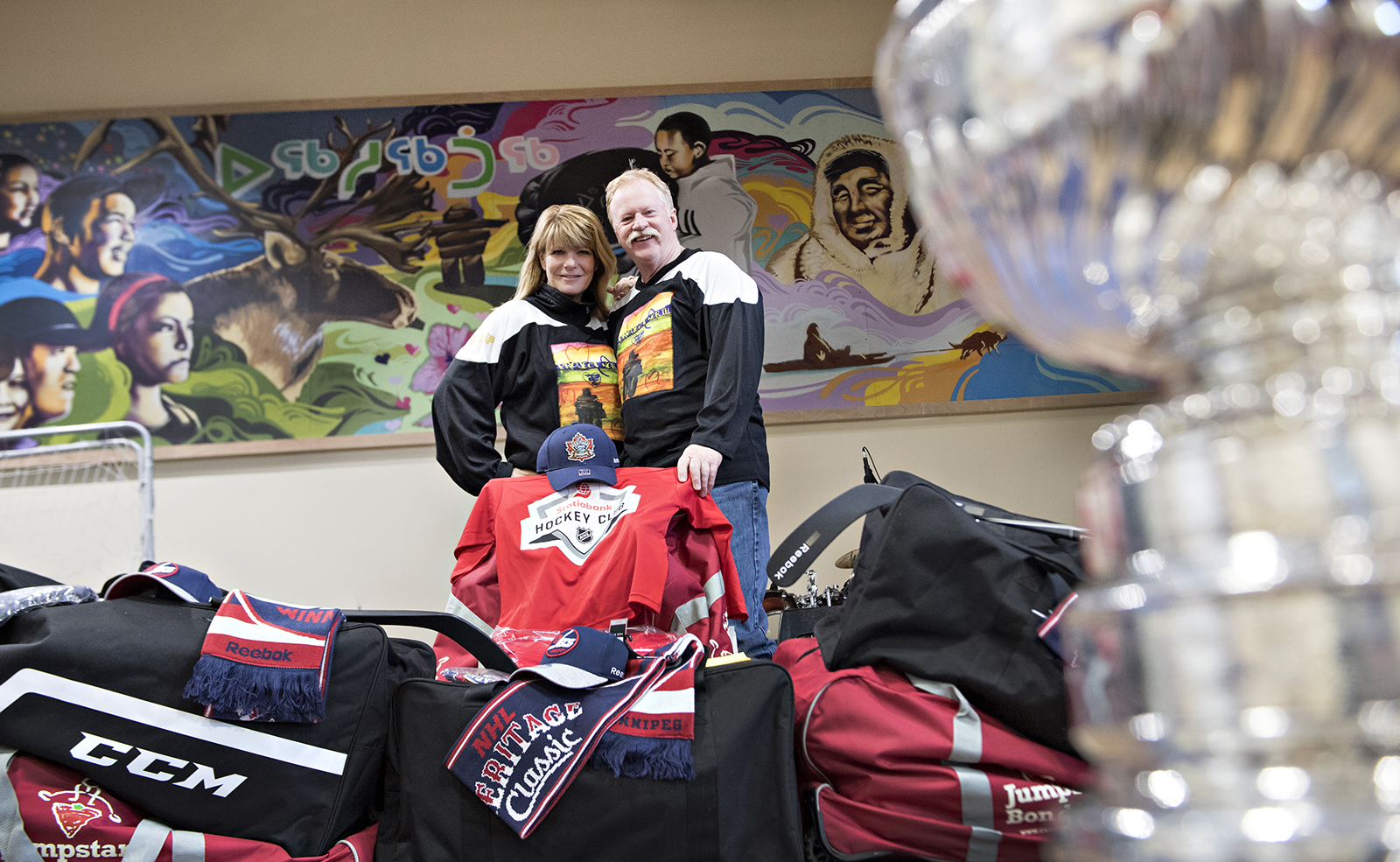 Pond Inlet was the first community that we delivered to in 2009, and we had a little community event to hand out the gear. There was pure joy on the kids’ smiling faces. One of the things we didn’t really anticipate, though, was that their parents would also became more engaged in the sport.

One of the most profound comments was from a woman in that hamlet, who simply said, “thank you for not forgetting about us.”

We hear we’re making a difference. More kids are playing, more kids are joining teams. Kids who have the talent but who didn’t have the equipment are now playing on Nunavut teams or have new opportunities to come down to the southern part of Canada to play.

Scotiabank has been very generous and just gave us another nice donation to buy more equipment, and we hope to have another fundraising event planned soon. We’re going back to Nain, Labrador, with Adventure Canada to deliver equipment. They’re huge hockey fans and we visited once before, about eight years ago.

Project North run is by volunteers: dedicated people who want to make a difference to children in Northern communities. We’ve raised more than one million dollars in 10 years. And I think that goes to show that if you have people who believe in the idea and want to help, anything is possible. 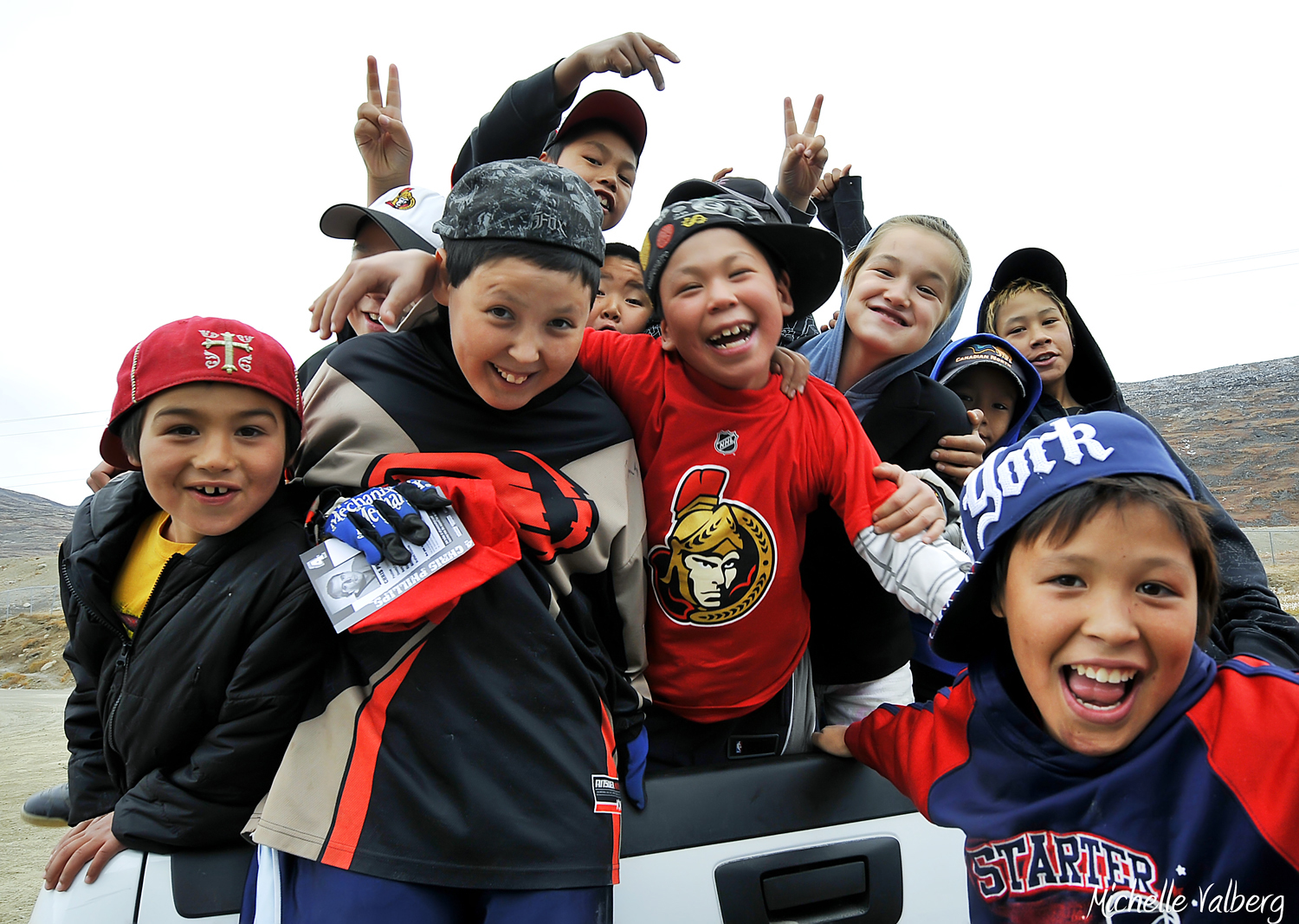 A group of excited youth in Pangnirtung, Nunavut. (Photo: Michelle Valberg)
Don’t miss an exclusive opportunity to see Michelle Valberg’s best images and hear her share highlights from her assignments around the world live in Ottawa on November 7, 2019! Reserve your ticket now.