Fisheries Minister Jonathan Wilkinson on the future of Canada’s oceans

The new Minister of Fisheries, Oceans and the Canadian Coast Guard sits down with Canadian Geographic for an exclusive interview on a range of topics, from salmon to whales to ‘last ice’
By Aaron Kylie
November 14, 2018

No shortage of action: that sums up the first few months of federal Minister of Fisheries and Oceans Jonathan Wilkinson’s tenure in the portfolio. Since he was appointed in July 2018, he’s announced a new Wild Salmon Policy Implementation Plan for Pacific salmon, introduced new measures to help protect highly endangered southern resident killer whales, celebrated the second anniversary of the Oceans Protection Plan and is at the helm of Canadian efforts to address the international issue of abandoned fishing gear. He’s also inherited oversight of saving the last North Atlantic right whales following last summer’s crisis in the Gulf of St. Lawrence.

Canadian Geographic publisher and COO Gilles Gagnier and editor-in-chief Aaron Kylie sat down with Wilkinson on Parliament Hill on Nov. 8, 2018, to discuss these topics and more.

On Indigenous collaboration in fisheries management

The fishery is important to many, many Indigenous communities, and we recognize that as part of the reconciliation process, fisheries is one of the areas where it is perhaps simplest to make tangible progress on the ground. That is something that has evolved in some measure through court decisions over the past number of years, but we’re also committed to ensuring we’re involving Indigenous Peoples, not simply from a food and ceremonial perspective, but in the commercial fishery that’s an economic engine for coastal communities. As we move forward, we can start to think more about co-management of the fishery.

We announced that in British Columbia on the same day we kicked off the International Year of the Salmon, with the province. One key piece of an effective salmon management plan is federal-provincial cooperation, because some concerns are provincial jurisdiction and others are clearly federal. With British Columbia, we’ve agreed that we need to align our work to ensure we’re being effective and judicious in the use of the resources. More money for habitat restoration is important, and in the short-to-medium term, additional investments in things like hatcheries are going to be important, too. We also need to know how we can address the emerging effects of climate change. The runs coming back on both the Pacific and Atlantic coasts are really problematic. That’s almost certainly in part a function of warming temperatures of the ocean.

On challenges in Pacific salmon conservation

Habitat restoration is a big one. The issue around hatcheries on the West Coast is a big one and looking at some of the issues around predation. I’m not convinced from a scientific perspective that predation is as big an issue as some people think it is, but we have to look at. And then there’s just how do you manage the fishery? What are you actually allowing from a take perspective, whether it’s commercial or recreational or ceremonial? We’re making decisions based on the best available science, but we could use more science, especially on some of the things like stock assessment. That’s a function of resourcing, and that’s something we need to address going forward.

We’re making decisions based on the best available science, but we could use more science.

On a plan to protect wild Atlantic salmon

Pacific salmon is iconic to British Columbians, and is very important to First Nations. Similarly on the East Coast, Atlantic salmon has a very strong cultural resonance, particularly in New Brunswick. As a national government we need to ensure that we’re addressing both of those issues concurrently. You will be seeing us come forward with an implementation plan that relates to Atlantic salmon. We’re working on it now, and it will definitely be announced as part of the International Year of the Salmon.

On Oct. 30, we announced an additional seven measures to our previous protection initiatives. We’ve identified two additional critical habitat areas on the west coast of Vancouver Island and we’ve talked about the idea of creating whale refuges or sanctuaries within some of them. Under the Fisheries Act, I can restrict fishing in a critical habitat area, but I can’t restrict transportation. With a sanctuary, you can restrict transportation. I met many times with coastal communities who are concerned about some of the restrictions that might be put in place. But the ultimate goal is effective protection and enabling long-term recovery of the whales. And we’re interested in the pathways that will have the least damaging economic impact. 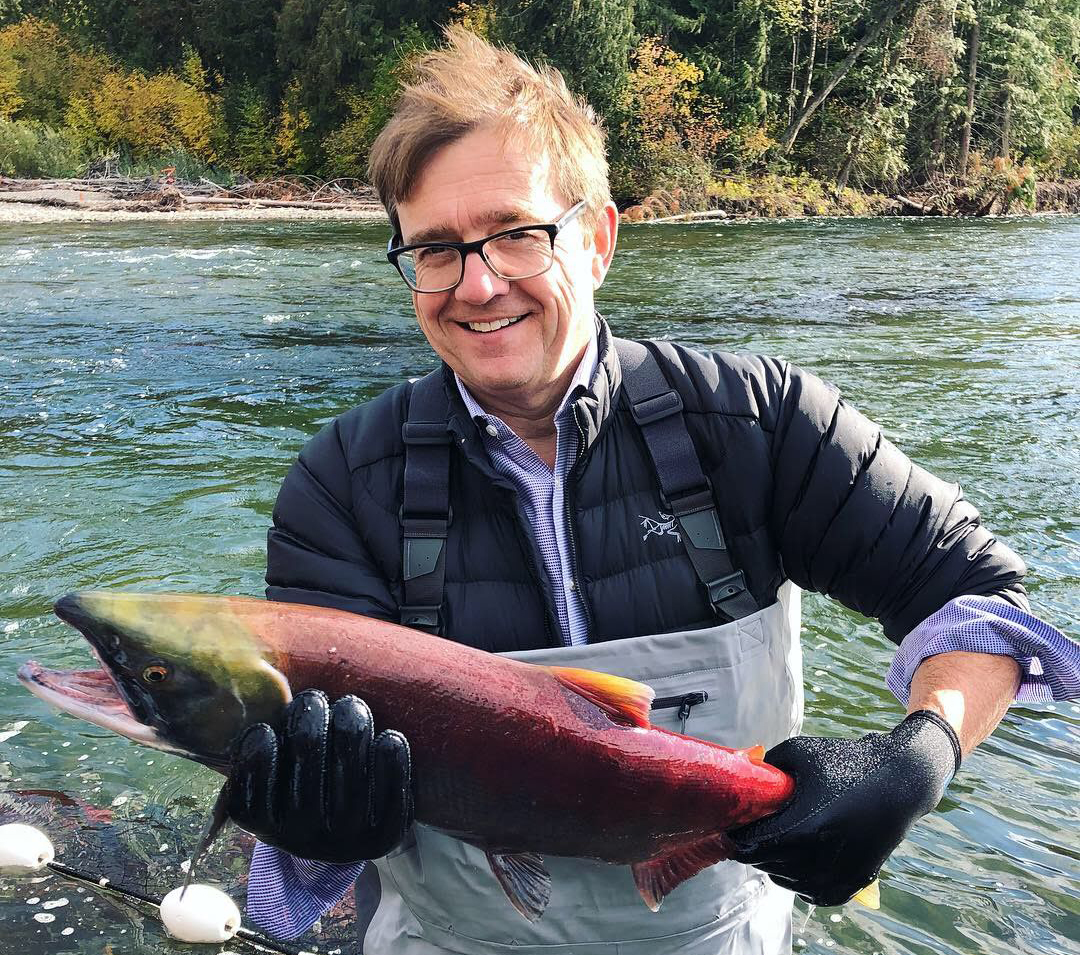 Wilkinson poses with a spawning sockeye salmon at the Salute to the Sockeye festival in Tsútswecw Provincial Park, B.C. (Photo: Office of Jonathan Wilkinson, MP)

On balancing economic and environmental concerns

The bottom line is you’ve got to have effective protection for species, so that’s where we start, but there are different pathways to get there. The first three years I was in Ottawa, I took responsibility for the terrestrial species at risk file, where I worked on caribou. There are pathways to effective protection for caribou that lead to the complete cessation of forestry in an area; there are other pathways that lead to continued activity, but protect critical caribou habitat. Why would you choose the first if you can actually get the same outcomes from the second? We would not be doing our jobs if we didn’t try to find the pathways that had the least detrimental economic impact.

On next steps for protecting endangered North Atlantic right whales

What [previous Fisheries Minister] Dominic LeBlanc did with right whales was very bold. There’s a strong correlation to the fact that we had zero deaths this year after 17 last year. That being said, we were reacting to a crisis situation. Going forward, we need to look at whether there are ways we can tweak those measures so that some of the impacts on fishing-dependent communities are not as dramatic. There was a whole group of fishers in Gaspésie who had no fishing last year as a consequence. That said, the benefit of the bold measures Minister Leblanc put in was that they had the intended effect, and they probably changed the nature of the conversation.

We would not be doing our jobs if we didn’t try to find the pathways to species conservation that had the least detrimental economic impact.

On the Oceans Protection Plan

This is the first time any government has really taken a comprehensive look at marine safety — and that’s everything from the safety of people out on the ocean to the safety of shipping. We’re thoughtfully managing, from an ecological perspective, the economic traffic, but we’re also ensuring that we are protecting mariners, whether that’s fishers in Eastern Canada, recreational boaters on the West Coast, or increasingly pleasure boaters in the Arctic. A lot of people try to reduce it to a particular project, but it’s far, far broader than that.

There’s a need for international leadership on these issues and to try to get everybody to do the right thing with respect to marking, and with respect to clean up, and with respect to producer responsibility. We joined the Global Ghost Gear Initiative [an international effort to solve issues related to abandoned fishing equipment], but for Canada to really lead on that, we need to get our own house in order. That means we need a domestic strategy that includes a review of existing regulations. Currently if you’re a fisher on the East Coast and you pick up abandoned nets, you may have too many nets on your boat and we will fine you. There’s a bunch of those kinds of things that we need to solve. We have committed to developing a domestic approach to ghost gear and we want to lead that conversation internationally.

The Aichi Biodiversity Targets were actually agreed upon by the previous government. When this government came to power in 2015, we were at one per cent of our marine target; now we’re at 7.9 per cent, so we’re within striking distance of the goal. We have a whole series of areas that we’re looking at in terms of marine protected areas and marine refuges. Based on all of the work we’ve done, we’re pretty comfortable we’ll get there.

We are very interested in ‘last ice’ [the only area of the Arctic where sea ice is predicted to persist year-round by 2050—Ed.]. There are a lot of us who desire to see protection up there. It’s a very unique area, and in the context of what is happening in the world, it’s going to become an even more unique area. There’s a process we need to go through and we need to respect the active discussions we’re having with Inuit leadership. Whether we will get there by 2020, I don’t know. If we were to achieve an agreement around protection of Last Ice, we would significantly exceed the 10 per cent marine Aichi Target.