Before Colin O’Connor was a teacher, he worked as a photojournalist. This recent school year, he witnessed an interesting body of work come together, a kind of historical document about the pandemic in Toronto from the perspective of his students. O’Connor is a communications technology and technological design teacher who teaches photography, filmmaking and bicycle maintenance and repair courses for grades 11 and 12 at several high schools in Toronto, Ont., including Humberside Collegiate Institute.

On the course and challenges during COVID-19

It's a course almost like a buffet where you sample a little bit of everything — photography, filmmaking, web design, audio production — basically telling stories using technology. Usually we’re in a studio and have access to a set of DSLR cameras and then some editing suites and computers. That changed this year. A lot of the classwork was done remotely. I teach a technological education course so it's basically experiential learning, so hands-on projects. I told my students, we're not going to learn photography by you listening to me talk about it on Zoom; that's not how you become a good photographer. Photography is a practice, so we have to go out into the world around us and engage with it. 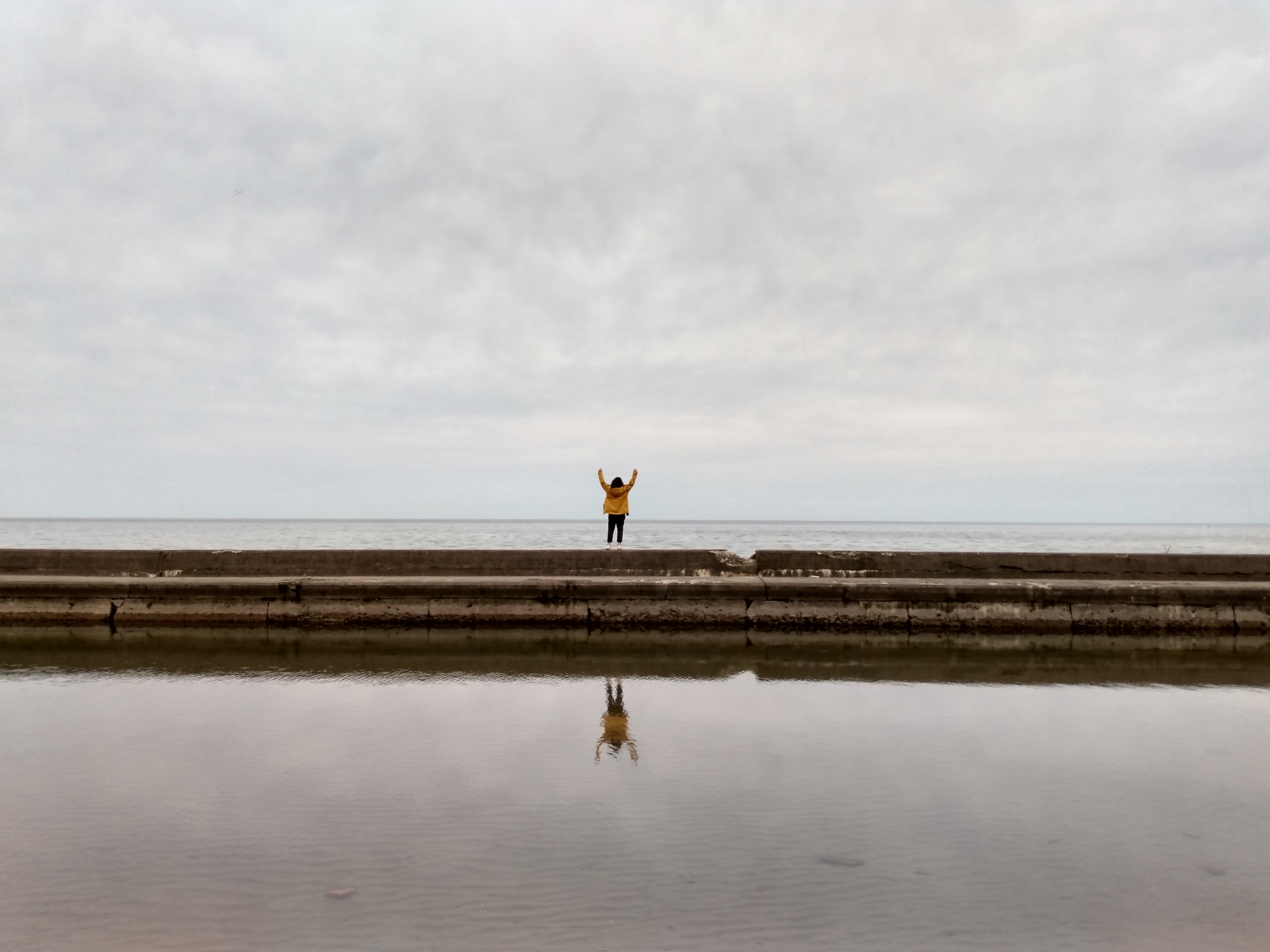 "In this photo the girl in the yellow coat stands on top of the stones in the middle of the lake. Regardless of her size relative to the world she still leaves a mark in the water. Just as she did, so can even the smallest of human beings leave a mark and make a difference in this big world." (Photo and caption: Vanja Dorovic)

Photography basically comes down to three things. Light is our medium — how is light playing around us. And then the next part is composition — what do you include within the frame and what do you exclude from the frame, and how are those elements arranged within the frame. And then the final thing is, which I think is the most important, is trying to generate an emotional response in the viewer through your photography, whether it's a beautiful landscape or you're capturing the human condition. I tell my students that even if you can just play with one of those things you're going to create something meaningful. 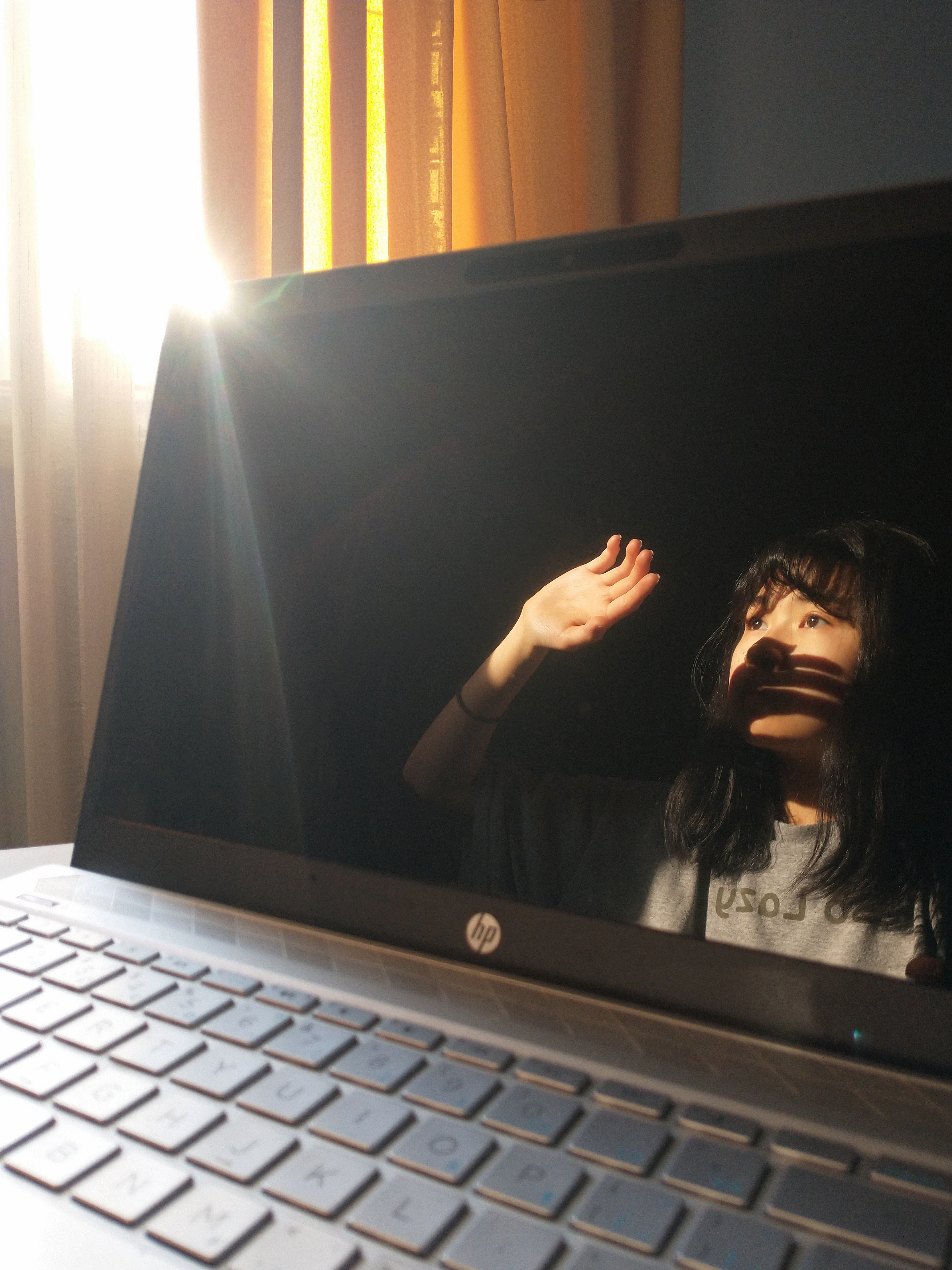 "This photo captures my reflection from the bright afternoon sunlight through my laptop screen, creating a trapped, quarantine-esque photo and the feelings of being caged in and alone, which are not exclusive to a pandemic. I was hoping to capture the power of voices and being silenced, as represented through the shadow of the hand over the lower half of my face, which could also be interpreted as a mask, but also the light of freedom, hope and identity." (Photo and caption: Cynthia Su)

On how photography relates to sense of place

I think photography is just a really good tool to engage with the world around us, whether that's socially, like taking pictures of people, or of natural or urban spaces. For example we did environmental portraits, where we take a picture of a person trying to capture that person's essence but within the context of a space so the subject matter is sort of sharing with us who they are, as well as the landscape around them contributing to their story as well.

I think that what photography makes us do is be really present, to be in the moment and then think about what story you want to tell about this particular place and how you want to engage with it. My students said, “There's nothing to photograph where I live.” And I always tell them, “You live in an extraordinary place during an extraordinary time and you are extraordinary. We just have to change how we see this place and how we open our eyes to the beauty that's around us.” 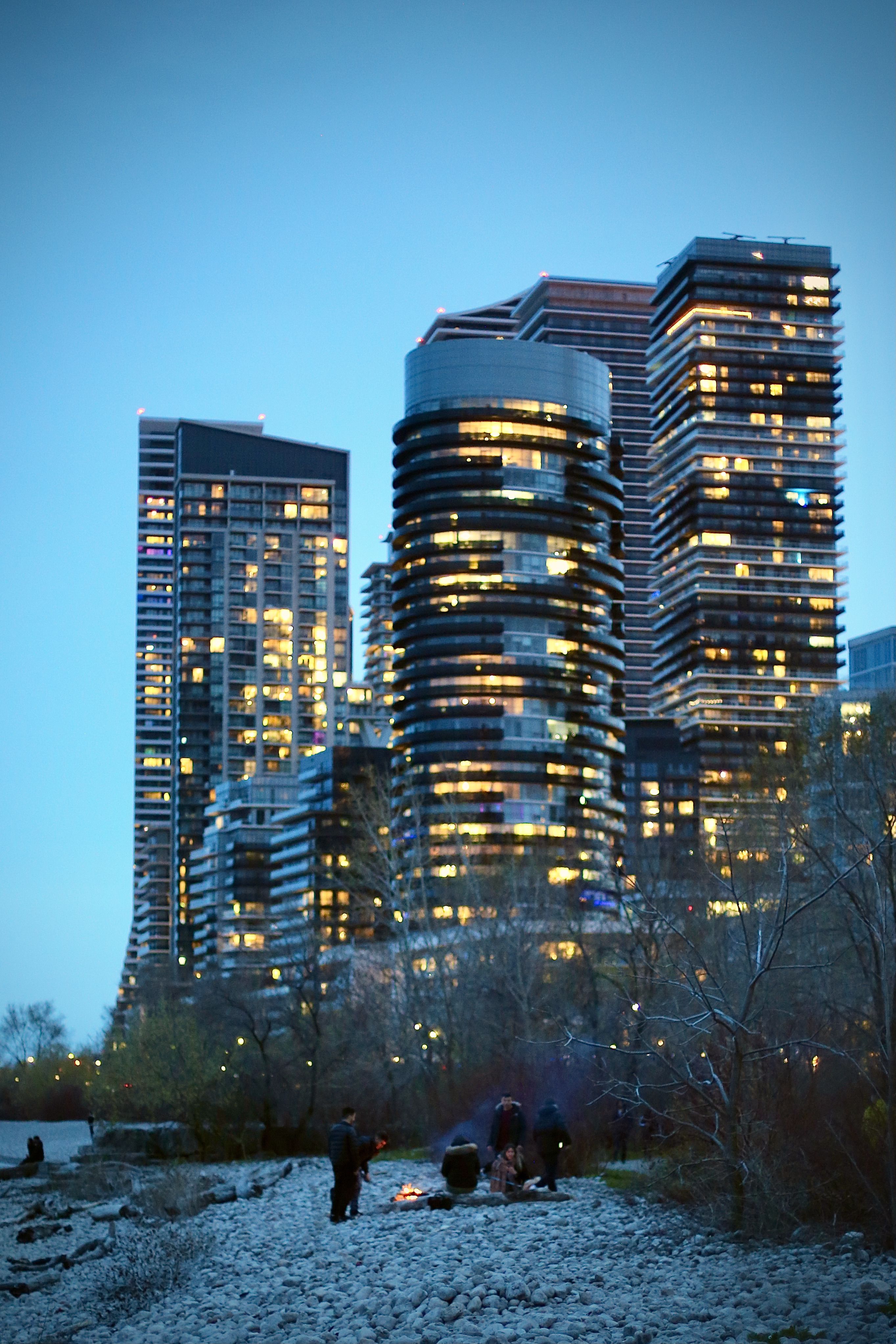 "In late April during the night of the pink harvest moon, small groups of individuals were getting together to enjoy the euphoric feeling of nightlife. After seemingly endless time in lockdown, it was refreshing to see people come to life together once again." (Photo and caption: Ashley Hope Balbaa)

On the importance of understanding human landscapes

I think that it's important to note that certain parts of the city have more access to natural green spaces than others. Humberside sits in a relatively wealthy neighbourhood with close access to High Park, the Humber River and Lake Ontario. But many students take public transit from other parts of the city and don't have immediate access to large natural public spaces in their neighbourhood. The variety of landscape photos that were submitted reflect the reality of these class differences. It is clear that the pandemic further highlighted inequality in our city and classrooms. We have seen higher rates of COVID-19 in communities with larger populations of black, Indigenous and people of colour. Many people living in these communities work as essential workers. Some students in my classes continued to work during the pandemic in restaurants and stocking shelves in grocery stores while some of their classmates headed off to family cottages for the weekend. 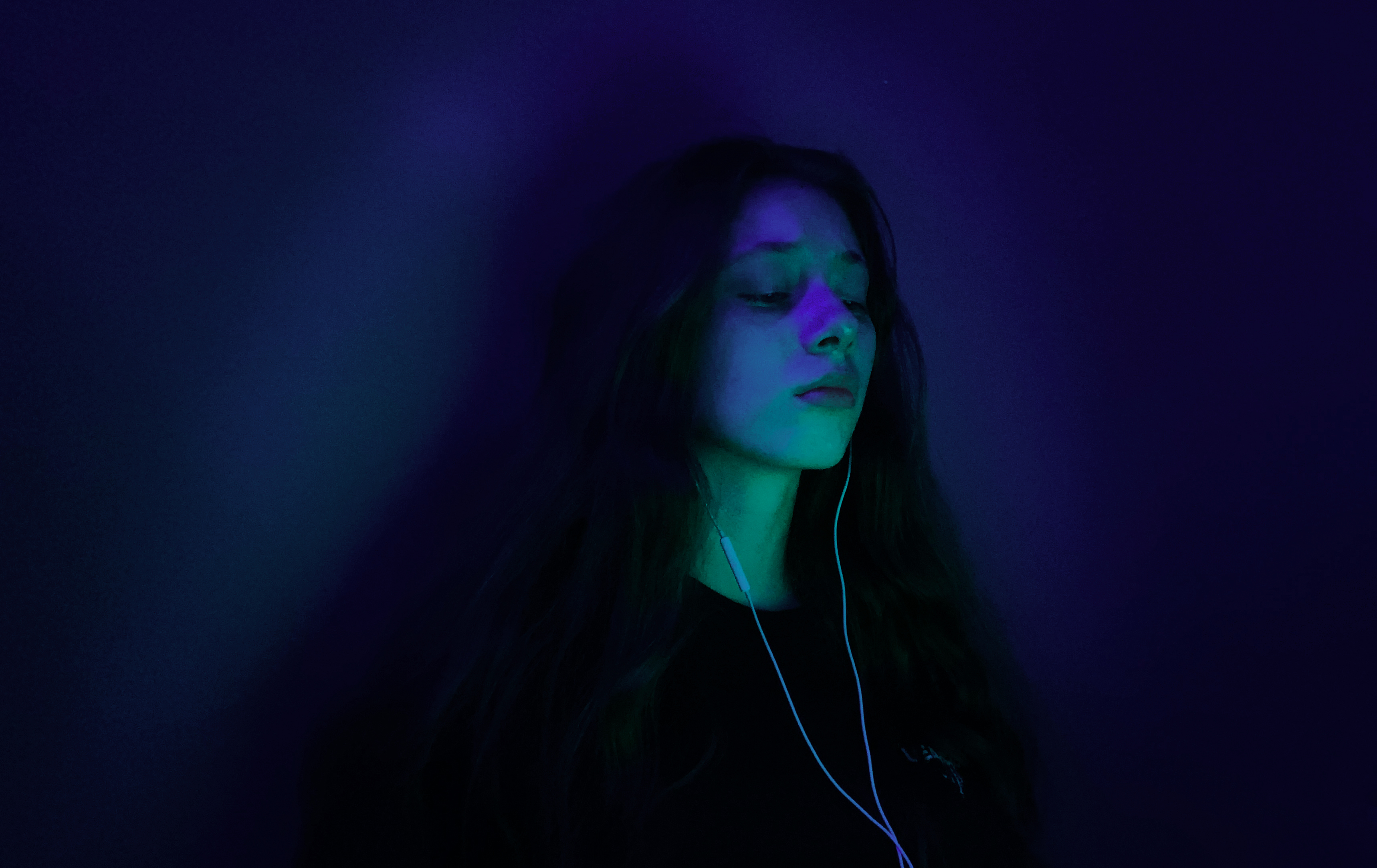 "Since this was my final course, I felt the ever-weighing set of responsibilities leading up to university and isolation towards the end of my high school career, having spent two years of it in my room alone. I conveyed my mentality about the COVID-19 pandemic and the use of online school with how the darkness is being consumed around my figure while I wanted my facial expressions to demonstrate a feeling of deep suffocated anxiety, dread and persistent worry." (Photo and caption: Nicole Gerlach Vitorino)

At the same time our class witnessed powerful images in the news documenting demonstrations in response to anti-Black racism, a vigil following an Islamophobic terrorist attack in London, Ont., and powerful testimonies commemorating Indigenous children killed during the genocide of Canada's residential school system. These events generated class discussions and included a viewing of Alanis Obomsawin's film Kanehsatake: 270 Years of Resistance during our documentary film unit. This film still resonates today and should be shown to every high school student across the country. It is evident to me that students are aware that these demonstrations, vigils and acts of resistance are, at their core, responses to processes of dehumanization. It is my goal that students see that photography and filmmaking, in their own small way, can be used as tools to document difficult truths and act as a means to tap into our shared humanity. 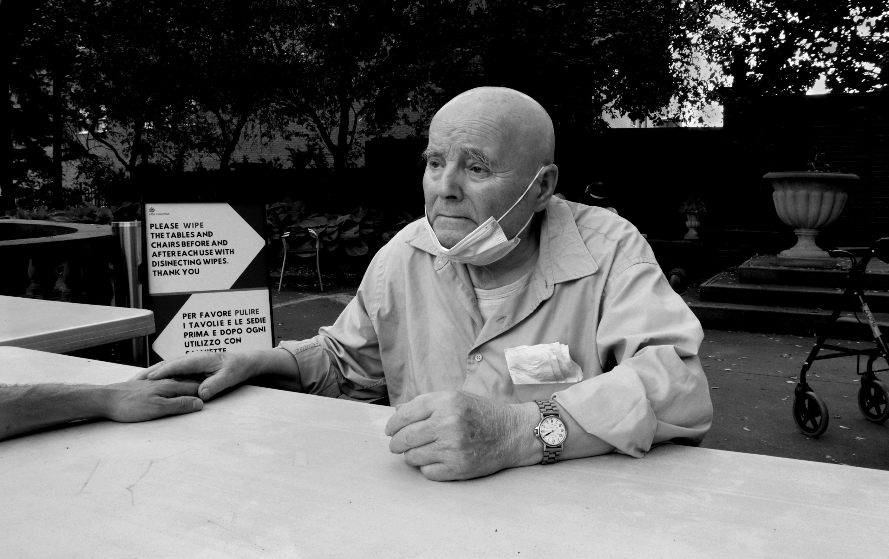 "In this photograph, I captured the relationship between my grandfather and my dad. During the many lockdowns, visiting long-term care homes was not an option. I took this picture one of the first times we could visit my grandfather and it was very emotional for us all." (Photo and caption: Victoria Campos-Gentile)

On how the pandemic affects perspective

Originally, in class they did a questionnaire, and a lot of them were struggling, understandably, with their mental health. I think that having a course where they didn't spend a ton of time on the computers but outside, a lot of them were grateful just to have that time and space to engage with the world that way. I think the pandemic has taught us the importance of public space and natural spaces around us, especially in a place like Toronto. People were really craving these spaces — we saw parks and bicycle pathways being flooded — and just realizing the limitations of being on a computer screen. My students intuitively knew this as well. That was a big focus and learning — something as simple as sitting by a pond and photographing a duck swimming by, or capturing birds and trying to identify them, or taking portraits of your friends in the park and just getting off the computer and being really present in the moment. 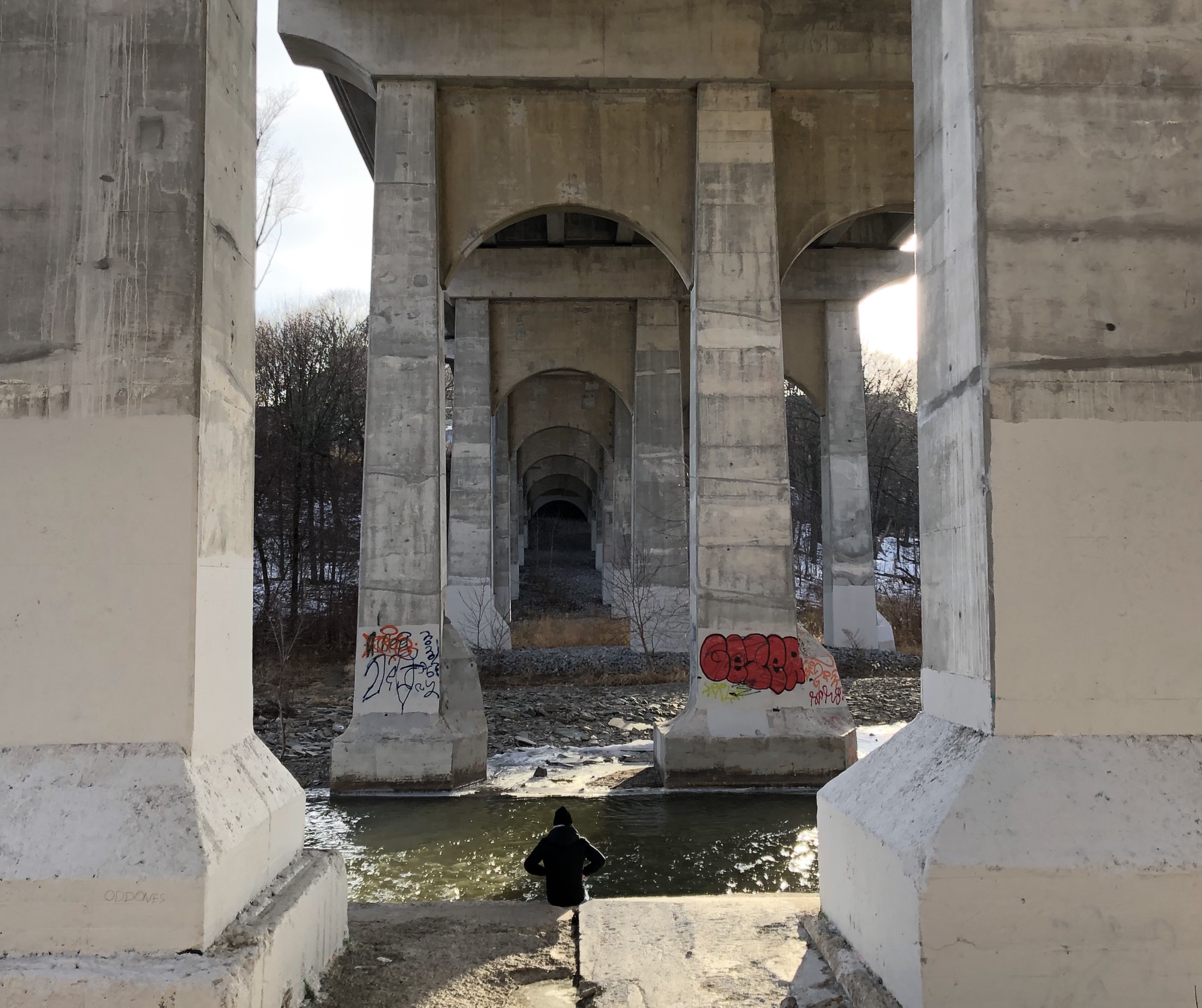 "Throughout lockdown my friends and I would walk along the Humber River most days of the week. Escaping the walls of our rooms and surrounding ourselves with the expansiveness of the park made all the difference when it came to our mental health. I chose to take the photo under this bridge to represent our size in relation to the world around us that we often forget when enclosed in our homes." (Photo and caption: Elliott Hoeckel)

In the studio, we were taking portraits of each other and at first the students were reluctant to take pictures with the masks, but these were kind of interesting and it forced us to play with the light a little bit differently. And there was a somberness to a lot of the work. I had students go out and photograph, for example, interactions with their grandparents in long-term care homes that they weren't able to see for a long time and they saw them for the first time or even a lot of the portraits at home that you could tell the students were struggling and that kind of came through in the work. But I saw a lot of hope as well in the photographs, and a lot of tenacity and resilience, especially the environmental portraits of the students, just kind of saying, you know, this is a difficult time, but here I am, surviving this, and we're going to get through this. And so there's beauty in that as well. I think they did a phenomenal job. 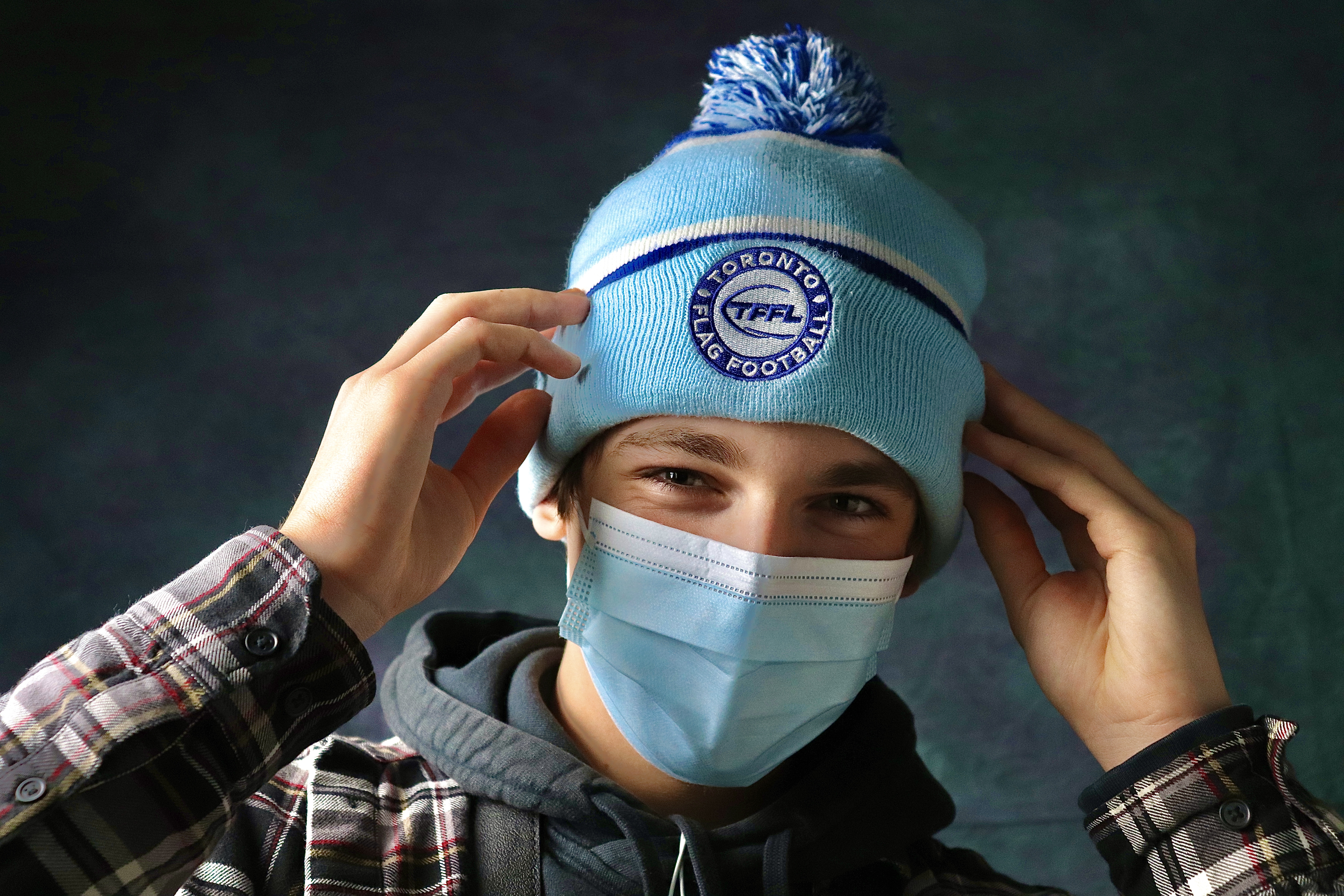 "This portrait captures the resilience of Humberside student Zachary Moens throughout the pandemic. While this year may have felt isolating at times, students were able to overcome barriers with a smile on their faces." (Photo and caption: Percy MacKinlay)

On what students are taking away

A lot of what the students appreciate is giving them the time and the space to create, go out and find stories that are relevant and meaningful to them and then coming back and sharing those with the class. We inspire each other that way. I'm always so impressed with the work and the different stories happening throughout the city that I normally wouldn't be aware of, because the students are out there engaged. I heard a lot of pride in their work. You can see the light go on for a lot of them in terms of creating something interesting and beautiful and different. My sense is that students began to gain a sense of legitimacy as photographers and artists. By the end of the course it is my hope that students feel that their work is important and that they have meaningful stories to tell. I always tell my students that powerful photos are not meant to be hidden on a hard drive but put out into the world. 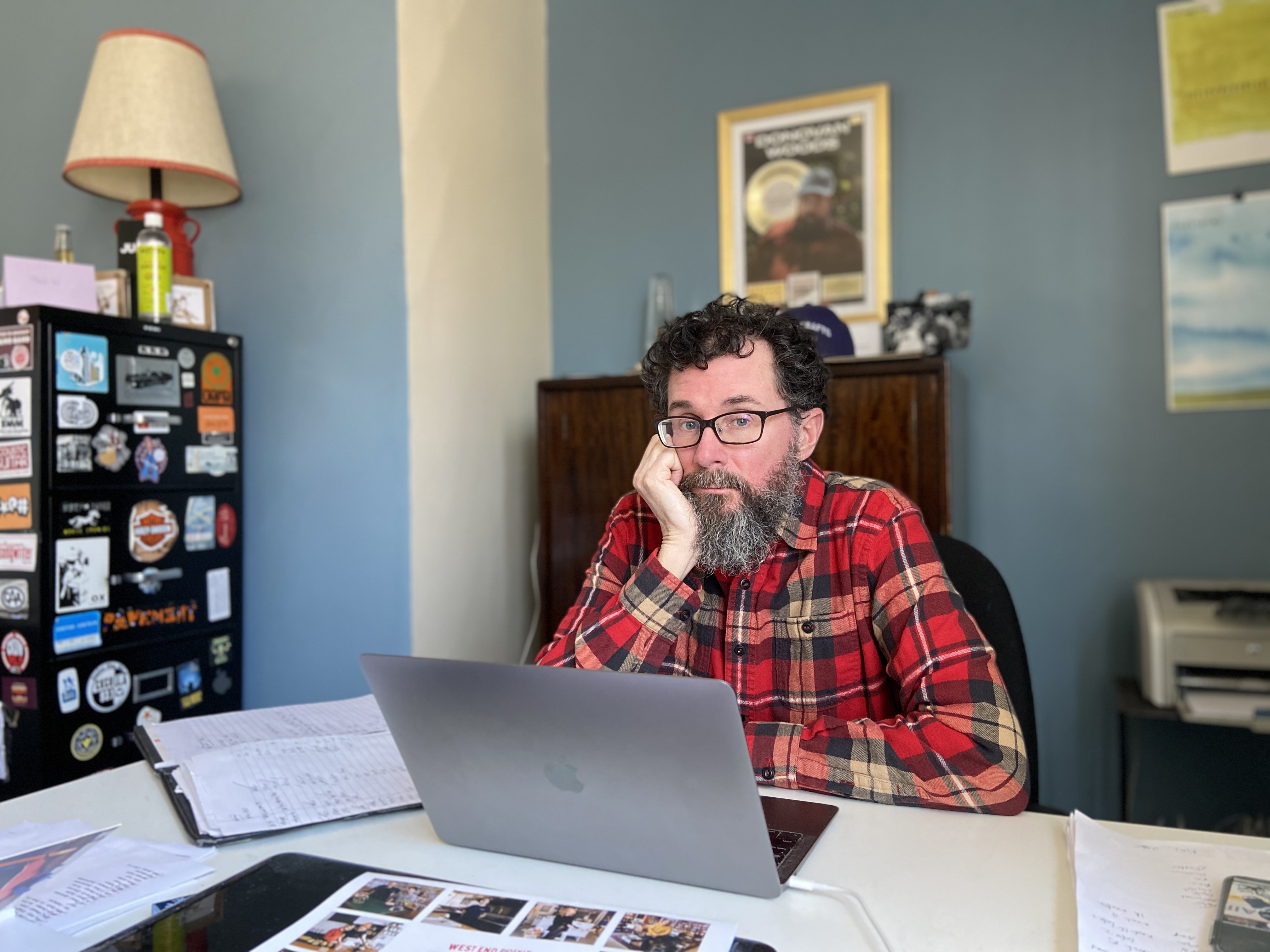 "This is a portrait of my father, Ken Beattie, who is a music publicist. On the right side of the image, hung up, are pictures of the two studio albums he released with his band Radiogram. Both of which he did the publicity for and did such a good job that he was hired by his record label to do publicity for other bands. From there he started his own company and has since helped artists from all corners of the world build up their careers." (Photo and caption: Cavan Kilkenny-Beattie)