The explorer versus the ice labyrinth

An exclusive excerpt from the new book Beyond the Trees: A Journey Alone Across Canada's Arctic by Royal Canadian Geographical Society Explorer-in-Residence Adam Shoalts
By Adam Shoalts
October 1, 2019

The island’s shore was made up of fist-sized rocks that made land­ing somewhat difficult, especially now that I was more conscious than ever of the need to minimize wear and tear on the canoe. Smashing through ice had been a necessity, but I knew what ice could do to a boat, as I’d seen Titanic — twice ...

I sprawled out comfortably beneath a spruce tree in the middle of the island and dozed off. The cool breeze kept the mosquitoes to a tolerable amount. An hour passed before I stirred to check on the conditions.

The sun, which had crept out from the morning’s clouds, was rap­idly melting the thinner chunks of ice around the island. Farther out, though, the pack ice that had blocked my route remained very much an impassable barricade. It was shifting on the wind, edging westward, the direction from where I’d come that morning.

Since it now seemed clear that I’d be waiting for some time, I decided to fetch my kettle and make myself some tea. After more than a month of continual travel, it felt like a vacation to suddenly be able to rest, enjoy a cup of tea and relax on the island. Perhaps being stranded in ice wasn’t so bad after all. I lit a match and held it to a bit of dry sedge placed inside a tepee of spruce twigs. 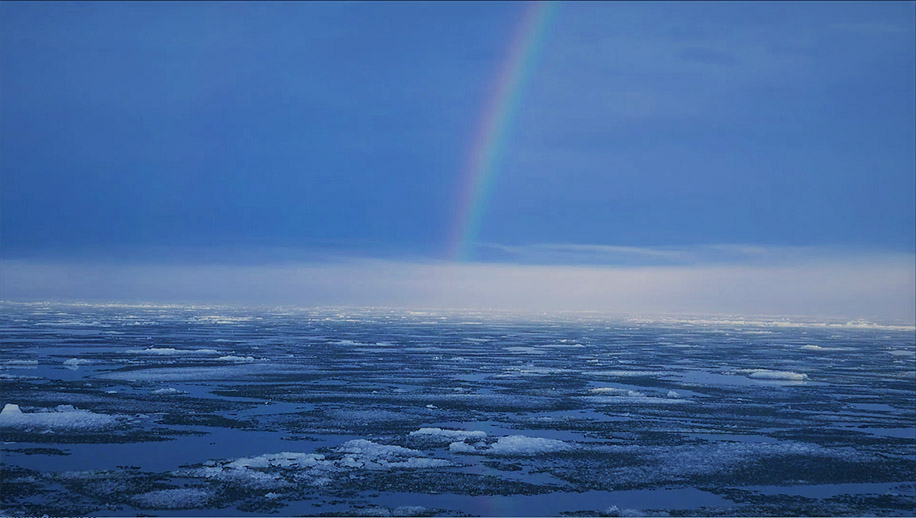 As the hours drifted by I drank tea, daydreamed, made notes in my journal and watched waterfowl fly across the bay. There were mer­gansers, pintails and goldeneyes, freshly arrived in these latitudes from their migration north. Just off the southern tip of the island was a large ice floe, still thick with several big blocks of ice heaved up onto it by the wind. A flock of pintails landed on it, making me think of penguins drifting on an ice floe. Gulls of various kinds, too, soared above the bay’s open water, hunting for fish. It’d been about a week since I’d last washed my face, so making the most of my island stay, I dipped my face into the ice-cold water along the shore.

As the morning and afternoon passed the pack ice shifted rapidly, the wind blowing it farther west. But more ice came along with it, keeping the route blocked. I was still hoping to push on that day should any break in the ice materialize. With that in mind I cooked up a freeze-dried meal, consuming the calories in the hopes that it would give me the energy needed to make a hard push that night along the lake.

But as the hours slowly ticked away the offshore ice to all appear­ances remained impenetrable. If anything, the evening had seen more ice drift into view. I’d assumed from what little I’d seen that the lake had largely melted, but the steadily drifting ice suggested that farther east much of the lake must still be frozen. Trouble was, without a bird’s eye view, how much or how little of Great Bear’s immense 31,153 square kilometres was open water or ice I had no real idea. From what I’d seen in the Yukon it had been shaping up to be a later ice melt than the previous year.

By late evening I’d resigned myself to the fact that for the time being I wasn’t making it any farther through the ice. I set up my tent on the island in the only place there was room for it, squeezed between some willow bushes and a spruce. Then I lay down to sleep, hoping that when I woke the wind would have shifted the ice enough to resume paddling.

Around midnight I stirred from my sleep. It was cold enough that I could see my breath inside the tent. I crawled out of the warmth of my sleeping bag and unzipped the tent’s door. It was still light out but the skies were clouded over, giving a twilit kind of gloom to things. I pushed through the willows to get a look at the lake, to find out what the ice had done since I’d been asleep. I was hoping that the wind would have blown it clear away, leaving me with open waters.

Instead, I could barely believe what I saw: the ice had multiplied, now the whole bay was iced over! The floes had drifted in all around the island, stretching off in all directions, entombing me on this little speck in the vast lake. I shook my head in surprise, but took heart in the speed with which the pack ice was plainly shifting on the winds. A few hours more and it might yet open up a passage for me. I thus climbed back inside my tent to sleep some more, hoping for better prospects the next time I woke.

Not quite three hours later, around three a.m., my eyes opened as I rolled over on a spruce root, which ran under the tent. I crawled out of my sleeping bag and back outside to find out what fate had in store for me now. Pushing through the willows, I was surprised to see...nothing at all. Thick fog had swallowed up the island, making it diffi­cult to see much of anything.

Nevertheless, my hopes rose a little, as I knew fog must mean warmer air temperatures were melting the ice. I scampered down to the south end of the island, pushing past willows out onto the rocks for a better view. There was some open water here, extending out a considerable way, at least before the mist obscured things. I couldn’t be sure, but it looked fairly encouraging. At any rate, a full day idle on the island had made me restless to push on, as what had initially seemed charming had now begun to feel more like an icy prison.

Anxious that the fast-shifting ice floes would close up the passage before I could escape, I raced to take down my tent, pack things up, and reload my canoe. By 3:30 a.m. I’d launched the canoe and was paddling away from the island back out into the lake. The fog limited visibility, but straight off from the island was a wide passage that was easy enough to make out. It brought me back in the general vicinity of where I’d tried previously to break across the ice. Pack ice still cloaked the lake as far as I could see eastward. An eerie, dead calm reigned, which at least would make things easier than they’d been the day before when the wind shifted the floes on me after I entered into them. 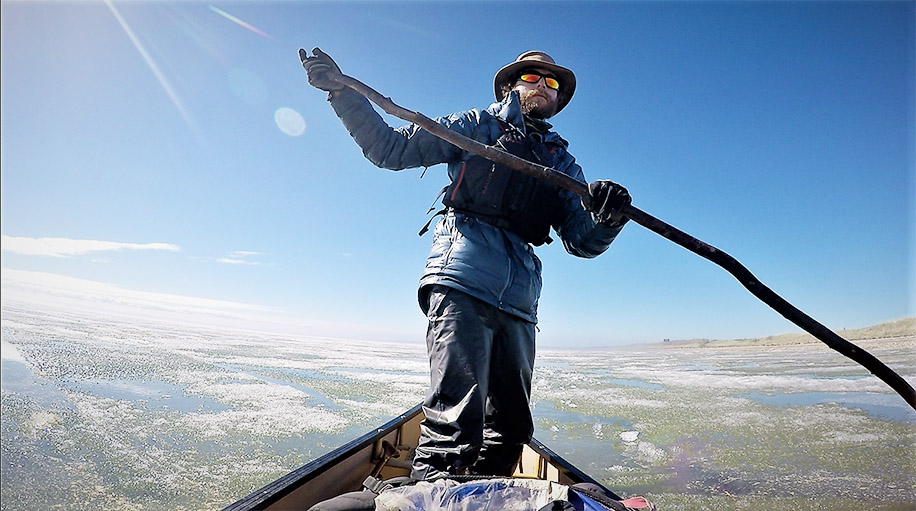 At times, Shoalts "poled" his canoe across frozen sections of Great Bear Lake, N.W.T., using a branch during his 2017 expedition. (Photo: Adam Shoalts)

I found a lead between two floes and began to weave into the pack. The core of the ice slabs, normally about the size of a big kitchen table, was still solid and opaque with white ice, but the edges had dissipated into clear ice that could be smashed and broken up. My canoe’s bow broke through this thin ice as I proceeded along, while I smashed with my paddle any other ice. In certain places, I’d have to put a little more muscle into it to split in two some of the larger floes that stood in the way. This took repeated jabs, aided by putting weight on the ice to force it down into the water. The water then flooding onto the ice helped break it up.

But in spite of my best efforts, it was soon apparent that the ice was still too thick to get through. I sighed, alarmed at the thought that for the second day in the row I might be stranded in the ice — my daily distance amounting to almost nothing. The odds of me finishing my journey before the onset of winter were dwindling. Up until now I’d been ahead of schedule, but Great Bear’s late ice breakup was a bad hand to be dealt. Even if I could get through the ice, wind and waves might still pin me down on the lake’s north shore. With a sinking feel­ing in my heart I pictured the sands of time in an hourglass remorse­lessly running out, winter on the horizon.

Excerpted from Beyond the Trees by Adam Shoalts. Copyright © 2019 Adam Shoalts. Published by Allen Lane Canada, a division of Penguin Random House Canada Limited. Reproduced by arrangement with the Publisher. All rights reserved.


Don’t miss an exclusive opportunity to hear Adam recount tales from his awe-inspiring journeys live in Ottawa on November 27, 2019! Reserve your ticket now.