Ewan McGregor and Charley Boorman, stars of Apple TV+’s new series Long Way Up, on electric travel, sustainability and where they’re headed after the pandemic
By Andrew Lovesey
September 19, 2020

With the world largely stuck at home, travelling digitally through Google Street View while sinking ever further into the sofa, Apple TV+ is premiering Long Way Up, a show that will remind us all of the adventures that remain to be had in the real world.

Long Way Up marks Ewan McGregor and Charley Boorman’s return to the screen more than a decade after their previous “Long Way” adventure. The series follows the Scottish film star and his actor friend as they attempt to travel 20,000-plus kilometres from Ushuaia, Argentina all the way up to Los Angeles, California. The catch: They are attempting the journey, through some of the most difficult regions on the planet, using electric motorcycles. And, to add to the odds, the bikes are a first-of-their-kind prototype. This is their first long-haul test.

The pair, who met on a film set in 1997, have travelled the world together: first in Long Way Round (2004), they travelled from London to New York — overland through Europe, Asia and Canada. Along the way, McGregor experienced such a life-changing moment that he returned to Mongolia months later to adopt his youngest daughter, Jamyan, who appears in the new Apple TV+ series.

Just a few years later, they returned to the saddle for Long Way Down, travelling from the northernmost tip of Scotland to the southern tip of South Africa. Then, life took the reins. Charley got in a serious automobile accident. Ewan raised his family while continuing his work in film. As is the case with many friendships, space followed time and suddenly the two were continents apart.

The beauty of Long Way Up is not just in the scenic vistas, or the enchanting-but-treacherous stretch of the Atacama. The real hook is the friendship McGregor and Boorman rediscover along the way.

The Apple TV+ show reunites the Long Way team to chronicle the struggles faced by indigenous communities throughout South America, the scourge of the cartels, the clear cutting of the rainforest, and invariably the challenges faced by early adopters of electric travel. McGregor and Boorman decided to tackle the near-impossible: making an epic journey using technology far more advanced than the available infrastructure can support.

Armed with custom Harley Davidson electric motorcycles, solar panels, a sprinter van and an electric Rivian truck, the team sets out to complete the trek. The first three episodes of the series premiere today on Apple TV+ — the Cupertino tech giant’s answer to streaming services like Netflix and Crave — and new episodes are scheduled for release each Friday throughout the fall.

Canadian Geographic had the chance to catch up with Long Way Up stars Ewan McGregor and Charley Boorman ahead of the premiere to talk sustainability, eco-travel and to learn more about their awe-inspiring adventure in the time of COVID-19.

On how a crash shaped the plan for this trip

CB: When I had the big crash in 2016 — where I had a meeting with the wall, and the wall kind of won — I smashed my legs up pretty badly. There was a possibility of losing part of my leg at one stage and I remember waking up in the morning with three of my limbs having bandages on them. I had broken my hands, my legs, and I was looking at myself thinking this was awful. I was starting to feel really sorry for myself, thinking if I had only left a minute before, or a moment later, then this wouldn’t have happened. And then I realized that I was sharing the room with someone else, and the person beside me was in a much, much worse state than I was. It was then that I looked at myself and thought, “this is alright, I’m actually quite lucky.” From that point on I wanted to get back on my motorbike, and back to my normal life. The idea of getting back on the motorbike then became my therapy, my physical therapy, that became my goal. All I wanted to do was get back on the motorbike. And I did. But then I had another huge crash and I had to overcome that as well. But that all enabled Ewan and I to reconnect properly again, when for once I was in London when Ewan was in London. So we hooked up and, as best friends do when you haven’t seen each other in a long time, we just picked up where we left off. Talking about motorcycles and planning the next Long Way.

EM: We are so bloody minded and optimistic, Charley and I, that we mostly were just talking about the electric charging. Worrying about mileages and how long it would take to charge the bike, how far we would be able to go. Those were really our worries. I don’t remember worrying about Charley’s condition because Charley was so gung-ho about it. Remember the first time you came here, Charley? You weren’t even able to walk around. You were on that little Honda Monkey Bike, riding down the path. Even then, I didn’t look at you and think “We’re not going to be able to do this.” We just thought we would figure it out. It wasn’t until we were riding in Bolivia that it was difficult. I was scared, on my bike. If you’re on rotted and sandy roads, and the front of your bike is kind of shaking its head at you. It puts your heart in your mouth. When you almost come off — but don’t. It gives you such an adrenaline jolt. On top of that, for me, I was looking at Charley ahead of me or alongside me, thinking the stakes for him were much higher, if he did come off and was unlucky with a landing. That was scary, I was scared for Charley, but at the same time when shit hits the fan like that — we always find that’s the funniest of times as well. We’re speaking to each other in our helmets, so we’re able to communicate. When it gets most tough, we have the most fun. We really do have a giggle.

CB: It’s this nervous outlet of laughter, so when you dodge the bullet, you just start to laugh.

On challenges and obstacles faced when travelling electric

EM: The major challenges were charging the bikes and the cold. And remoteness, which goes hand in hand with charging the bikes. In Patagonia, the settlements are far and few between. But there are some, and they do have electricity. Occasionally we had to bite the bullet and charge the bikes using generators because there literally was no other option. A lot of people who live in those remote regions are already using diesel generators for their electricity. That said, we also charged the bikes straight from solar panels, in a solar farm that we found. We were in an ecolodge in the north of Chile, where we were almost able to charge our bikes from their hydro-electric grid, which is solar and hydro powered. It didn’t quite work out, but we almost got it. I’m pretty sure it would have worked but we were unlucky, there was a glitch with the 12V battery in the bike, which told the bike it was charging when it was not. I like to think that could have been a possibility. 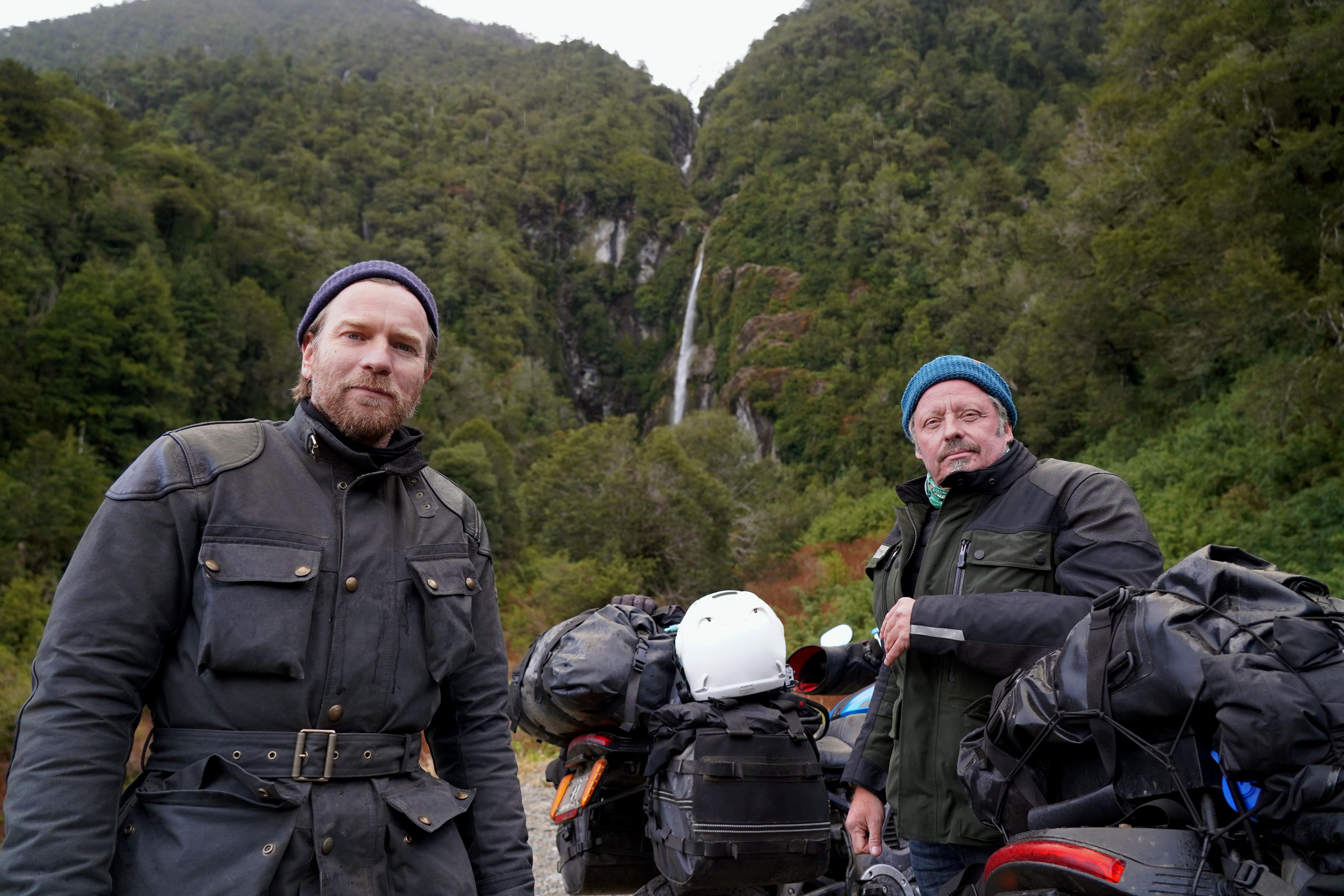 On their carbon off-setting commitment

CB: One of the wonderful things about the trip was that we were riding along on these motorbikes, which were carbon neutral, and plugging into solar farms and getting juice straight from the sun. It was lovely, but we did end up in the Peruvian Jungle, where we visited a wonderful organization which is helping communities to look at the rainforest in different way, rather than just slashing and burning all the time, they are challenging them to think about how to better live off the land and manage their own backyard. It was wonderful to see those remote villages.

EM: Cool Earth was the organization. They worked with these villagers to educate them. What would happen is, the locals would clear an area of the forest and continue growing the same crop until the ground had lost all its nutrients. Cool Earth works with the villagers to teach them how to plant different things throughout the year and rotate crops. It allows them to use the soil forever. We met this lovely guy who took us to his place, which was amazing. It was total indoor-outdoor living: just rooves and rooves, made from palm leaves. You could imagine his farmstead being in Wallpaper magazine, it was so cool looking. But he also was growing crops in the shade of trees. He knew how to keep the land sustainable. Up until then, they would just work the land until it was dead, slash down more forest and move on.

We also offset our carbon footprint for the production, calculating the impact made by our flights and boat rides. We had a sprinter van with solar panels on the roof, which we were able to plug into every now and again. We tried to establish what our carbon footprint was and are working to offset that so it was a carbon-neutral experience, the Long Way Up show.

On suggestions for where other travellers should go

EM: First on my list is Colombia. We crossed into Colombia and rode this old junker boat up the coast, and we tried to find some remote villages that were inaccessible by road, to find somewhere to fly the bikes across the Darien Gap. I would love to go back and explore these Colombian villages. Another favourite was Nicaragua, which I was very much about. I felt like I would absolutely go back, and want to. It’s difficult to put your finger on why, sometimes a place just hits you in the heart. Those two would be top of my list. really stood out for me.

CB: Costa Rica as well. The whole of Central America, for me, was one of the big highlights. In Costa Rica, the first lightbulb they ever turned on was powered by renewable energy. 905 of the energy they uyse is renewable, they don’t have a military so the money that would go towards military spending is diverted to renewable resources, education and all sorts of things. I was really blown away by that. It was in Costa Rica that we were able to charge our bikes from solar panels. Southern Mexico, as well. That wonderful fish meal we enjoyed in the car park of a petrol station. That was the best restaurant for 20 kilometres, and it really was amazing.

EM: It was under a tarp in a car pack.

This was a Canadian print/digital exclusive interview with Ewan McGregor and Charley Boorman.