Excerpt from Takaya: The Lone Wolf

An enchanting and evocative look at the unique relationship between a solitary, island-dwelling wolf and a renowned wildlife photographer
By Can Geo Staff
With photography by Cheryl Alexander
December 16, 2020

Cheryl Alexander has been documenting and studing a lone wolf named Takaya (the Coast Salish First Nation's peoples word for wolf) who has been living in on a small group of islands in British Columbia's Salish Sea for years. This fall, Alexander released a book, Takaya: Lone Wolf, showcasing Takaya's journey and mysteries including her own photographs, interviews and journal entries.

Read an excerpt and see some of the photographs below:

He was unheeded, happy and near to the wild heart of life. He was alone and young and willful and wild hearted, alone amidst a waste of wild air and brackish waters and the sea harvest of shells and tangle and veiled grey sunlight. -Jon Krakauer

He arrived on the island shore alone. Possibly at dawn. Likely exhausted. Probably exhilarated. Perhaps fearful. Certainly on a mission. 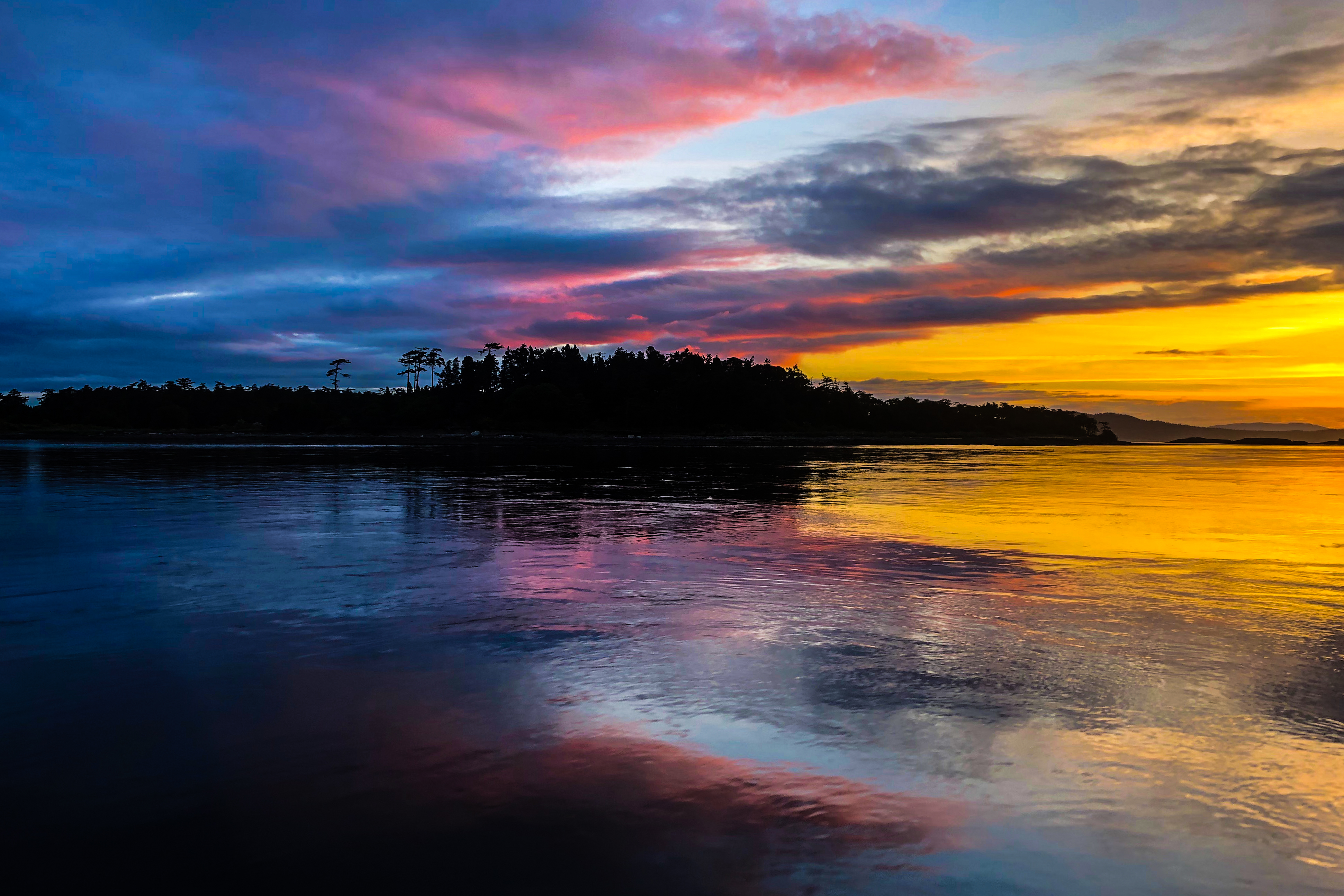 One of the many dramatic sunrises that greet me as I arrive in the islands.

He was searching for three things — the three things that he needed to survive and thrive in life: A reliable source of food. An exclusive and safe territory that he could call his own. A mate.

Was this where he would find those things? Should he stay?

Now, almost nine years on, he remains on these island shores. It was predicted that he wouldn’t survive here, with limited food resources and no year-round source of water. Yet he has survived and is thriving. He has found two of the three things he was searching for: food and a safe territory. The third remains elusive. 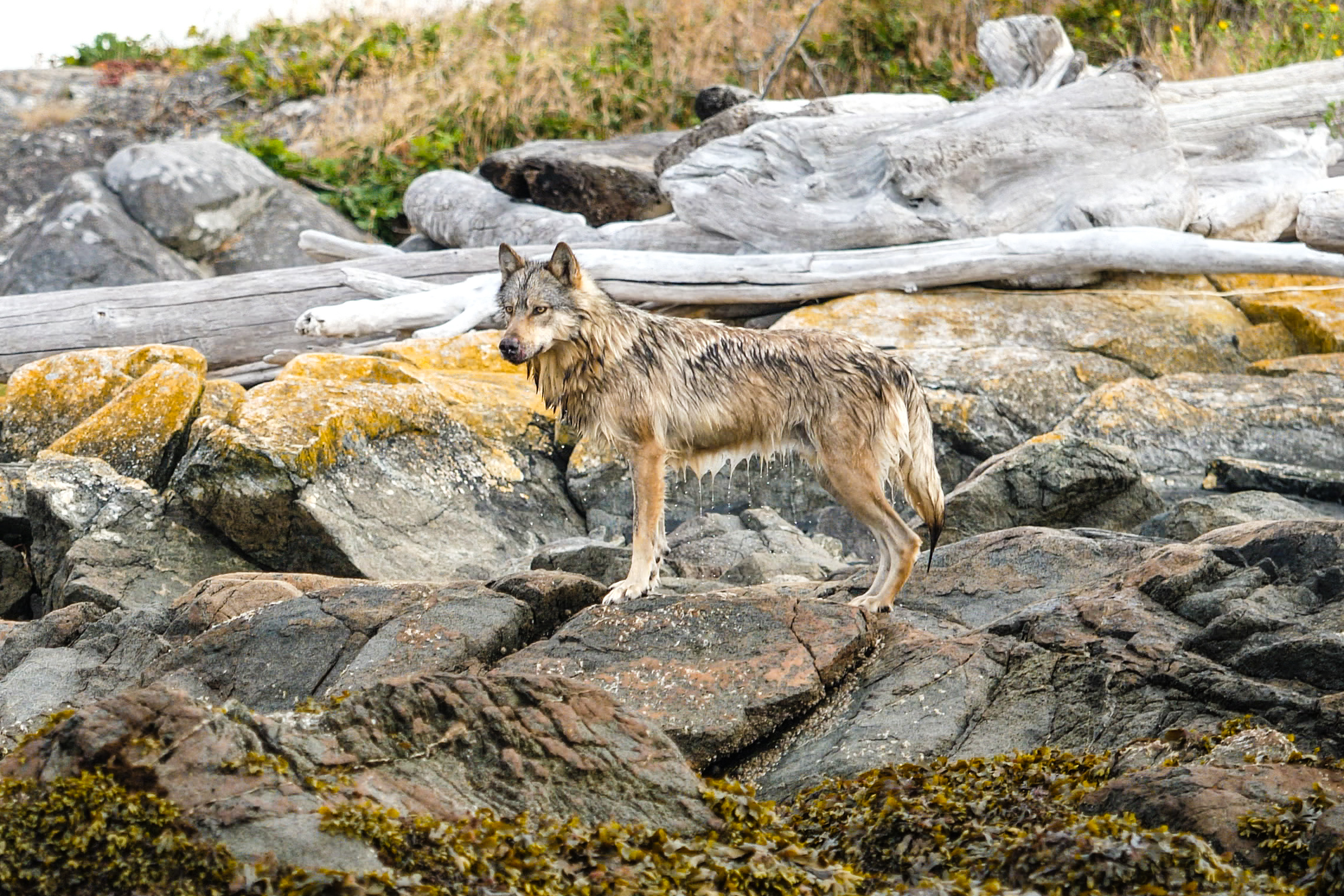 Takaya dripping wet after a swim.

Over the years since he arrived, I have come to know him and to learn much about his chosen, and most unique, life. Many questions have been answered, however mysteries still abound.

This is his story. And mine. He was a young wild wolf. 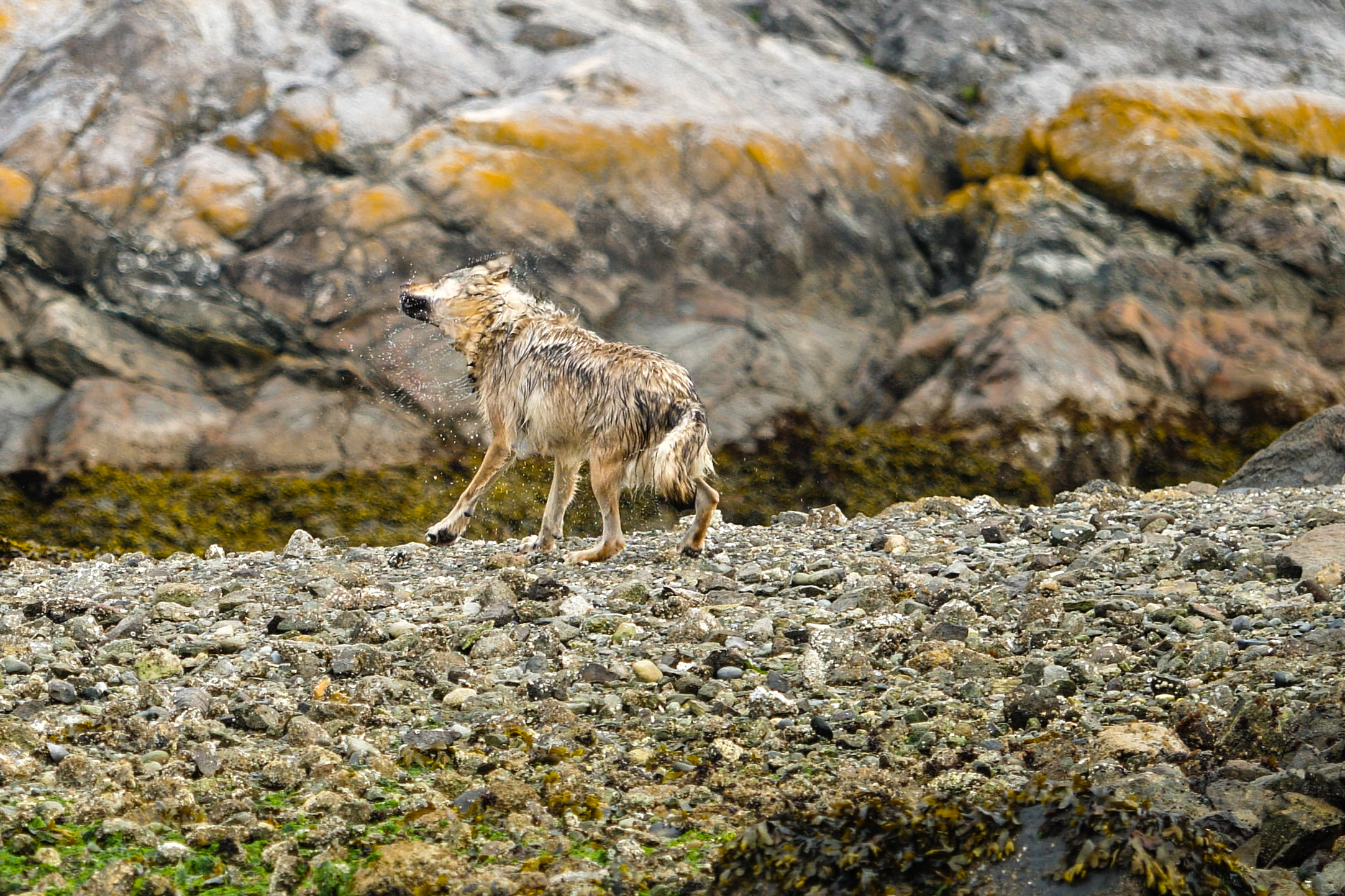 Takaya shaking off the sea.

As many wolves do, he probably left his natal pack when he was between 2 and 3 years old, looking for a territory and a family of his own. Or maybe he was just looking for adventure — a real pioneering wolf.

No matter the reasons he left his early home, in May 2012, as he got out of the sea, shook himself off and climbed up onto the shores of the isles that were to become his territory, he likely had little idea of what his journey would mean.

This young wolf had arrived in a small archipelago just off the coast of Victoria, British Columbia, Canada, with no deer to hunt, no other wolves, and very near to a city of over half a million people. He had left what we consider normal wolf wilderness habitat, and had instead crossed over 40 kilometres of urban areas and city suburbs in search of his new home.

He’s now almost ten years old and I’ve come to know him well. I have gained this wolf’s trust and documented his life, shooting thousands of still images and hundreds of hours of video footage.

It is almost impossible to document the life of a lone wolf in the wild. They travel vast distances and are rarely spotted. Mostly on the move, lone wolves are difficult to follow unless radio-collared, and so their lives are largely unseen. This wolf’s unique situation allowed me to gain his trust, and to observe and document his life. 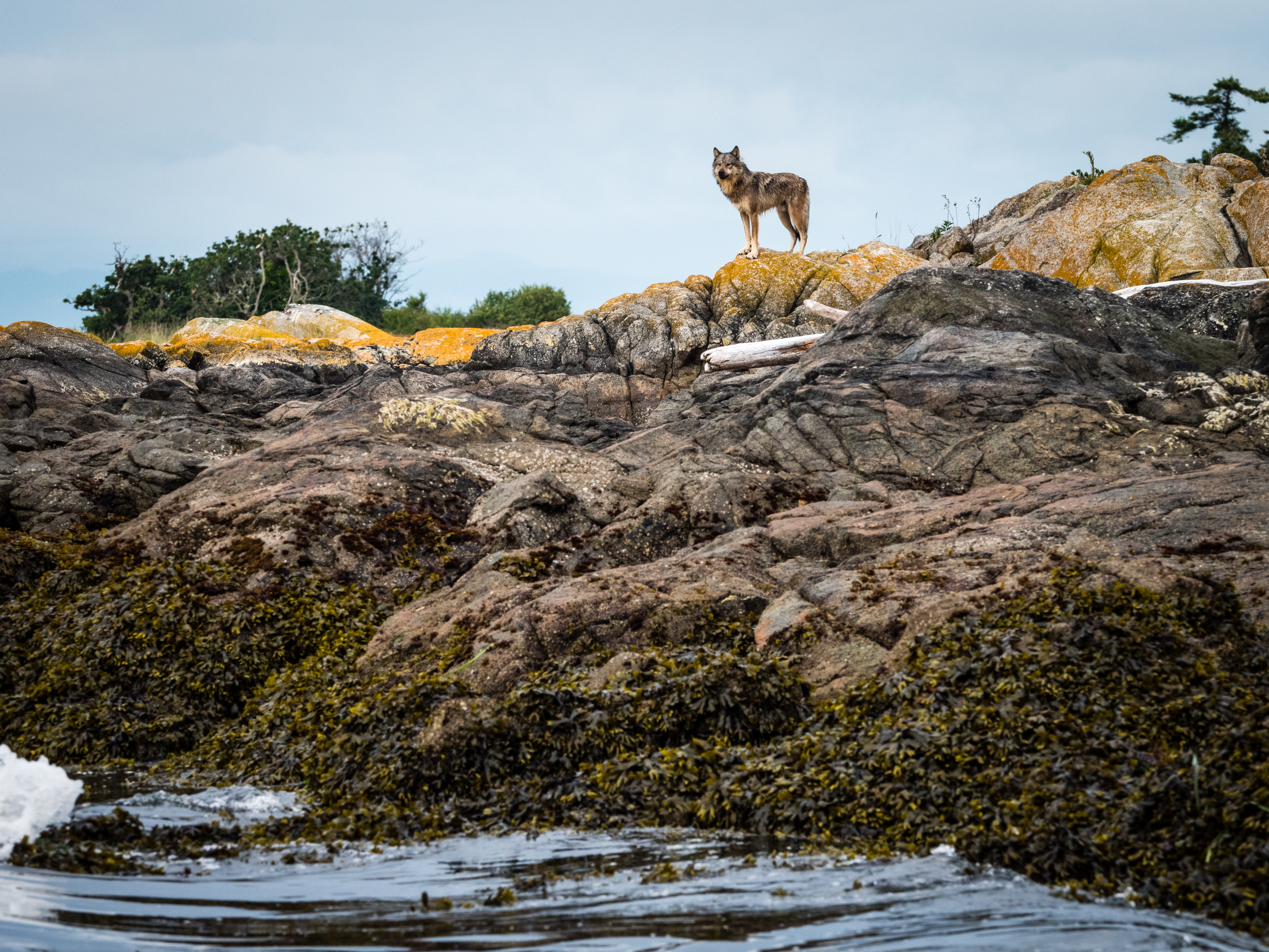 Takaya surveys his islands after arriving on the shore.

I became intent on understanding his life and wanted to solve his many mysteries, such as: Why did he cross ocean and city to get here? How did he adapt and thrive in such an unusual habitat for a wolf? Why does he stay here, choosing a life of solitude? And what will his future be?

After a while I grew tired of just calling him the wolf. I chose to call him a name which means wolf in the language of the Coast Salish Indigenous people who historically inhabited this area.

His name is Takaya. 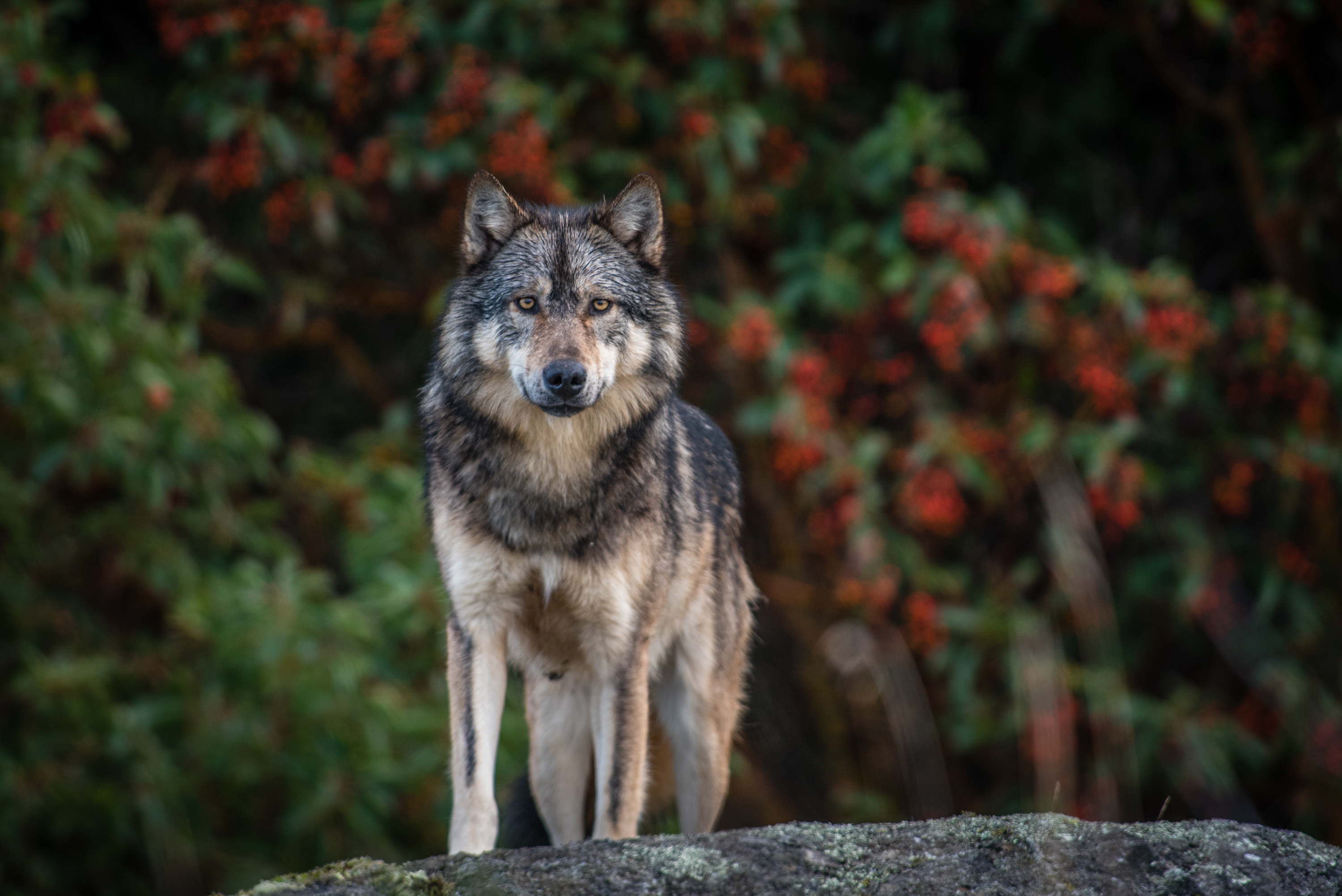 Takaya watches me from one of the island bluffs... curious,calm and majestic.

We shall not cease from exploration, and the end of our exploring will be to arrive where we started and know the place for the first time. -T.S. Eliot

As a dispersing wolf, Takaya had found the first of the three things he was searching for: a territory to call his own. He likely very quickly began the ongoing process of marking his home territory. Although a tiny one, it was his. 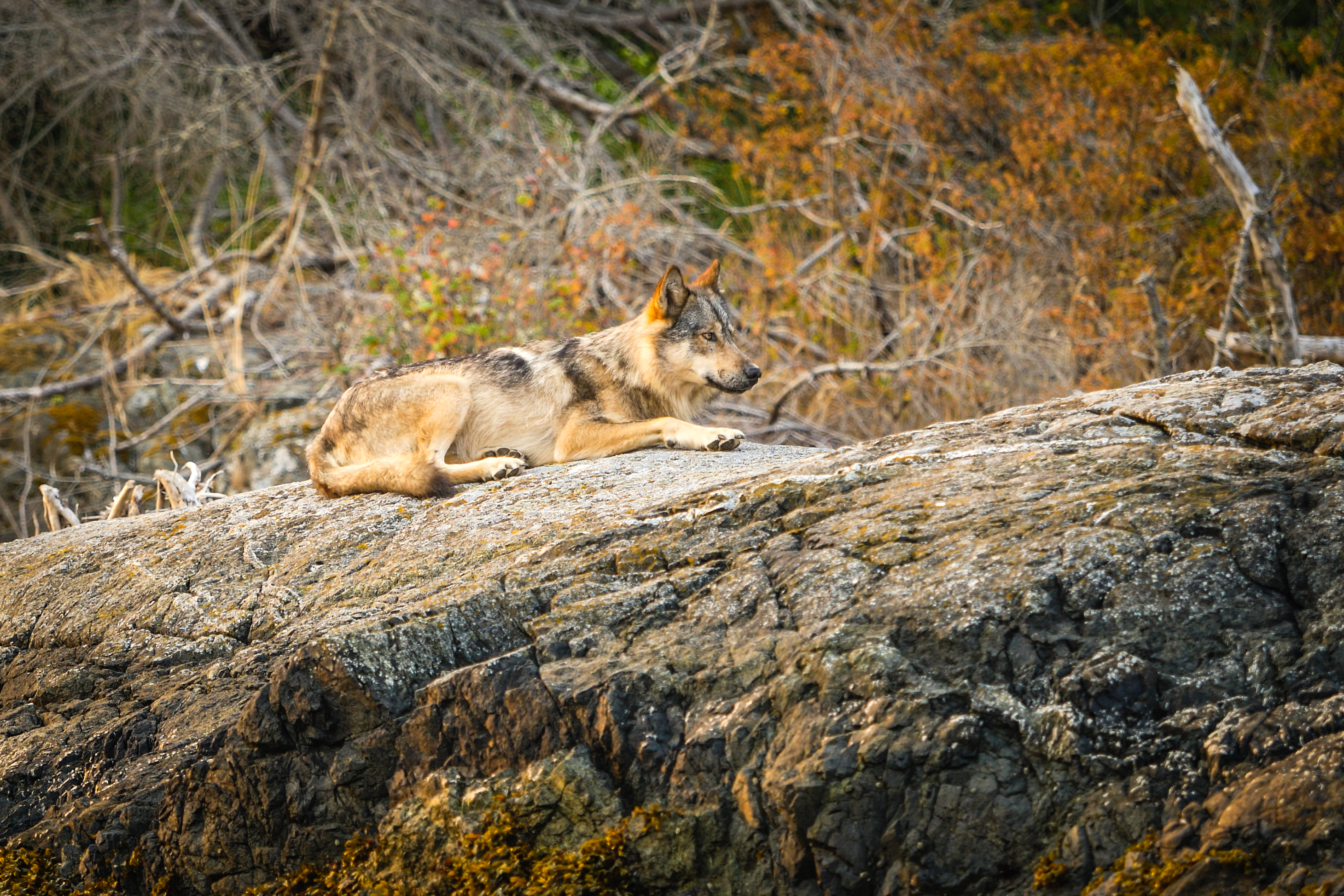 Takaya blending with coastal colours of his ecosystem.

Takaya’s new territory near the southernmost tip of land of British Columbia contains habitat unique to this area of the province. The forests are largely coastal Douglas fir, arbutus woodlands and Garry oak meadows, which are some of the most at-risk terrestrial ecosystems in Canada. Tidal lagoons, vernal wetlands and coastal bluffs dot the terrain.

Wolves generally live in the more northern areas of the island and province, choosing forested lands where the ecosystems do not include arbutus trees or Garry oak meadows. 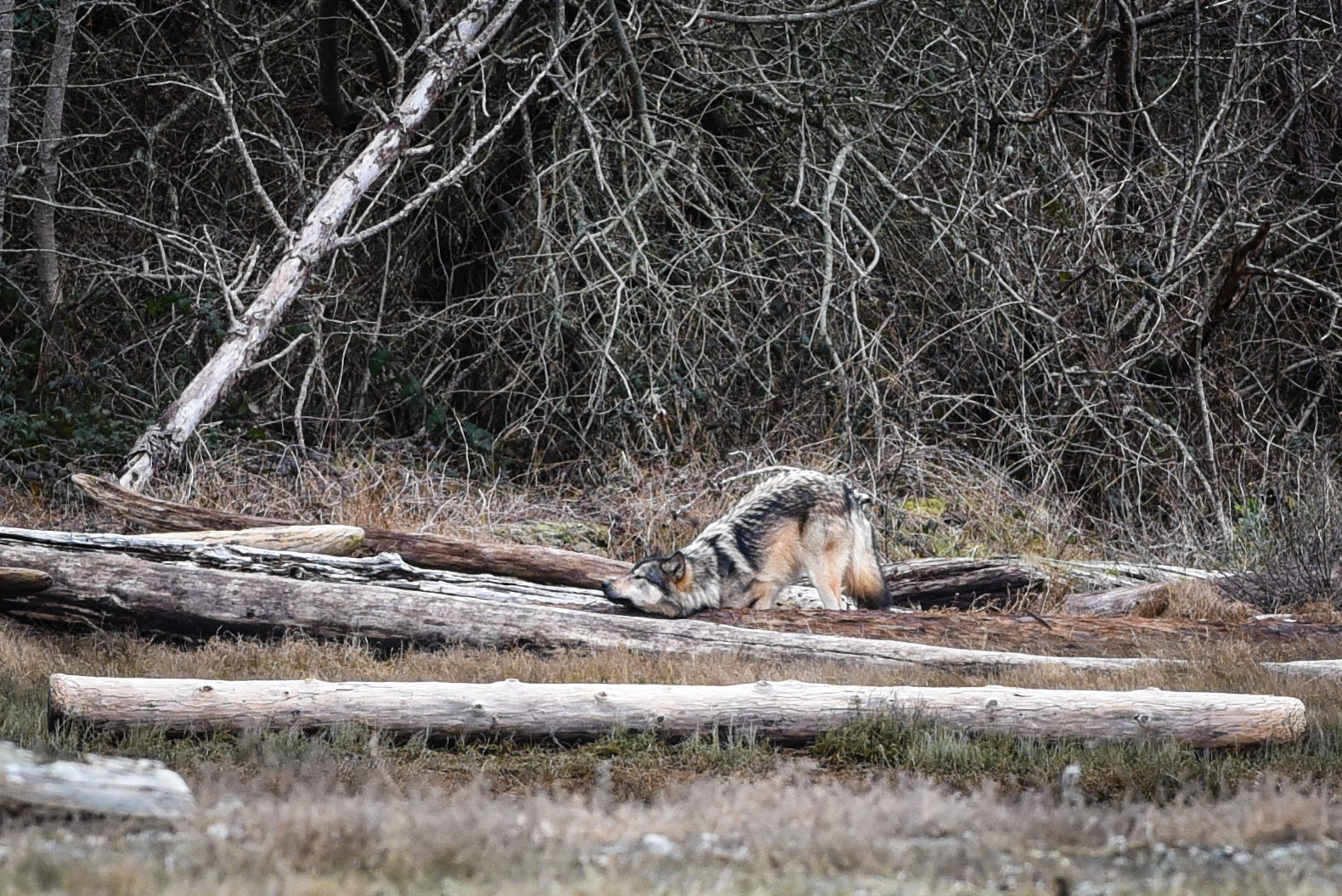 Takaya scent-rolling in an unknown substance.

This makes Takaya’s choice of home a rather unusual habitat for a wolf. It is rare to see a wolf against a backdrop of the beautiful reds of the arbutus tree, or lounging in meadow grasslands. Takaya’s coat fits this ecosystem in a most remarkable way, blending with the coastal intertidal and arbutus colours, making him virtually invisible to anyone passing by. The fur behind his ears glows red, almost as if reflecting the rich auburn hues of the arbutus bark under which he lies. Takaya’s territory is unique in another way from most other wolves: his life on the islands has also required that he adapt and live with constant reminders of humans and their activities. He sees and hears the hum of the city, of hammers at construction sites, of dogs barking in neighbourhoods, of cars and sirens, of airplanes and helicopters constantly overhead. Kayakers, paddle-boarders, boaters and whale tours make visits to his islands, yet he has learned how to maintain a safe and healthy boundary, preferring to avoid rather than approach people. He has had to figure out how to safely coexist. 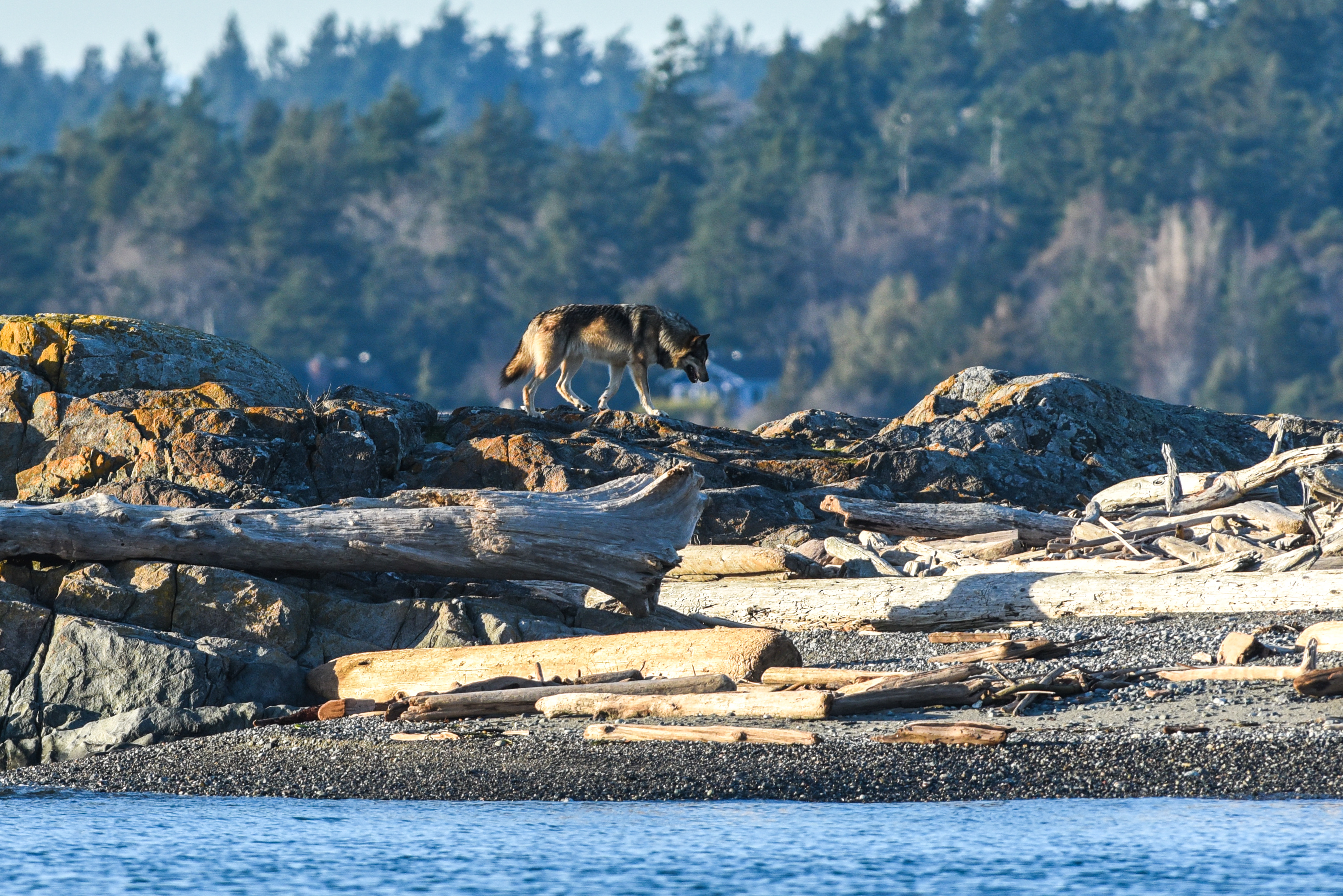 Takaya traverses his territory, a suburban area of Victoriavisible in background.

The second thing that Takaya was searching for was territory that contained a reliable source of food. A stable food base is really significant for a wolf — especially one on his own. This was likely a little challenging for him in this island ecosystem. It is most likely that his early life with his natal pack primarily involved hunting deer, elk and other small land mammals. This new territory required that he adapt to and figure out how to hunt a new kind of prey, and rely on an almost completely marine mammal diet.

Takaya’s new chosen habitat had no deer or other ungulates like elk or moose, and no small land mammals like rabbits, squirrels, racoons or beaver. His typical prey didn’t exist, so what was he going to eat?

Very quickly Takaya would have begun to develop a complex understanding of his territory. He would have traversed each nook and cranny of it and begun to learn every detail of the landscape. It is obvious now, after almost nine years, that he knows every stone and tree as well as the movements and possible locations of his potential prey: under which pile of beach logs he will find otters; where the seals will haul out; where they may leave their pups. He knows where, when and how to lie in wait. To begin with, however, he would have had to observe and learn.

These islands also have no year-round source of fresh water. There are some swamps and vernal ponds on three of the larger islands which fill during rains, but in times of drought during the summer and fall months, these often completely dry up. What would Takaya drink then?

And then there was the third item on Takaya’s list — a mate. But there are no other wolves in this territory, or even very nearby. The nearest wolf packs live more than 40 kilometres away and the sea and a city separates him from them. Where would he find a mate?

In the 1990s, Jamie Dutcher, with her husband, Jim, had dedicated her life to raising a pack of wolves in Idaho, filming and studying them in intimate detail over six years. The pair developed extensive knowledge of the social lives of wolves. I invited Jamie to the islands to see Takaya and to get her thoughts on why he came to the islands, as well as why he stays. She told me a wolf will most often leave its natal pack at about 2 to 3 years of age because of a deep-held urge to strike out and start its own family. These are the would-be alphas who recognize that their pack already has a strong alpha, a fact that prevents them from becoming one. 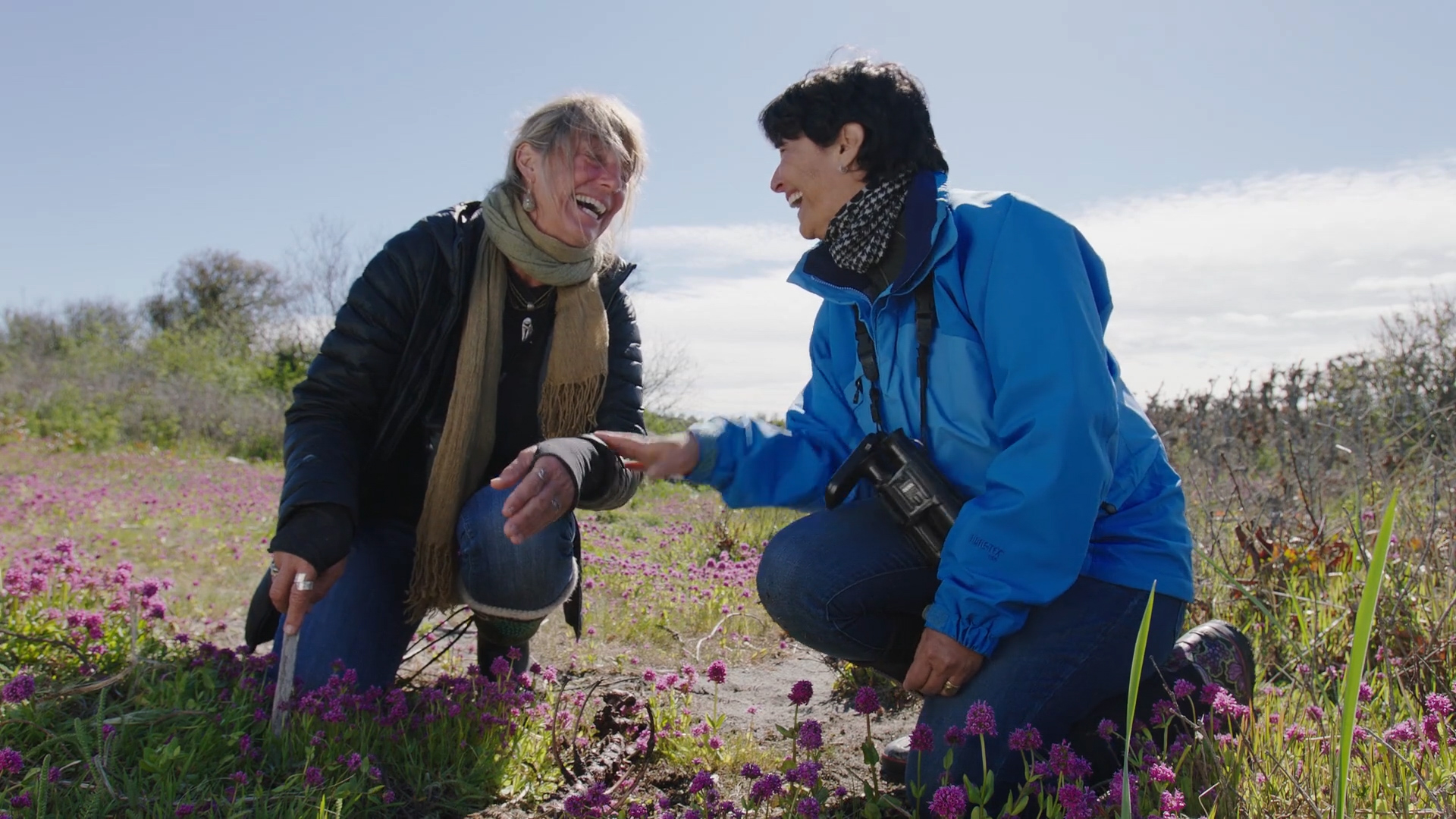 Jamie and I discuss possible techniques that Takaya may have used to turn seals inside out.

Females and males disperse from their packs in approximately equal numbers. A dispersing wolf will generally look for another dispersing wolf of the opposite sex and start a family. “Being a lone wolf is not a situation that a wolf wants to be in for a long time, because they are such deeply devoted family animals,” Jamie told me. “To be a single wolf for an extended period of time is incredibly difficult. There are stories of wolves that have struck out on their own and have gone searching for territory and a mate, usually for several months or possibly a year or so, but not as long as this wolf. He is pretty remarkable.”

Another iconic lone wolf known as oR7 undertook a similar journey in the western U.S. That wolf wandered many hundreds of miles over nearly three years before eventually finding a territory and mate. 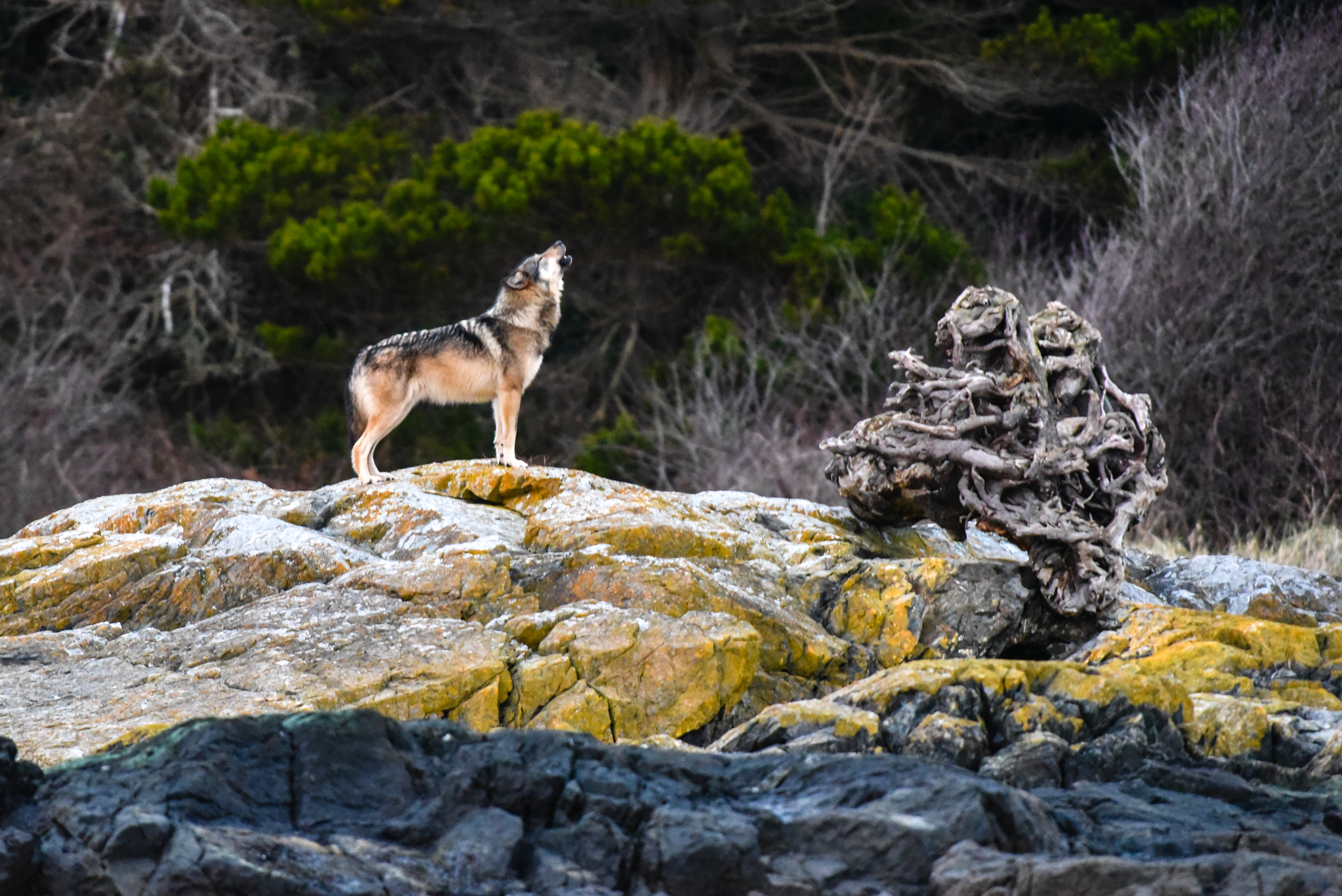 A lonesome howl at dusk.

It would seem, then, that despite being alone, Takaya is a leader — an alpha male in waiting. Lone wolves usually have the strongest personalities and are the risk-takers best equipped to adapt to new challenges. This certainly seems to be the case with Takaya. He has proved his mettle by remodelling his behaviour to survive at the very edge of normal.