Wildlife is figuring out that human infrastructure helps with the hunt
By Ryan Stuart
January 11, 2018

Can wild animals learn new tricks? When it comes to recognizing and adapting to human infrastructure it often doesn’t look like it: birds fly into windows, whales are struck by boats, grizzly bears are hit by trains.

But increasingly, predators are showing they aren’t old dogs yet. Several species have learned to use humans to make hunting easier.

“Just about any predator will learn new behaviour if the reward is there enough times,” says Shelley Alexander, a geography professor who teaches a class on the interaction of humans and wildlife at the University of Calgary. “But only the individuals of a species that are very resilient to being around humans will adopt a new behaviour around infrastructure.”

Take the case of grizzly bears and train tracks in Banff National Parks. Since 2000 at least 17 grizzlies have been killed by trains in Banff, a major dent in the local population of 60 bears. In response, Parks Canada and CP Rail, the company who built the line in 1885 and still operates the tracks, funded a $1 million project to better understand what was going on.

By attaching GPS trackers to 26 bears and analyzing their scat, researchers found the bears were attracted to the tracks for two reasons: to feed on grain that had spilled out of cars, but moreso to scavenge carrion of other animals hit by trains. The bears had discovered that when the train whistle blew, dinner was served.

Scientists are now interested in understanding the long-term impacts of this new behaviour on the bear population’s genetics. If that selective pressure is strong enough to give resilient individuals an advantage, they could pass on a genetic willingness to interact with humans, says Alexander. This might lead to more animals that are comfortable hunting and simply being around humans.

A more complex question is whether the learned behaviour itself could become genetically coded. The field of epigenetics studies how learned behaviour is passed down to the next generation through DNA. For example, in one experiment, a smell was released in a cage of mice just before the mice were given an electric shock. This was repeated until the mice showed fear when they detected the odour. When the researchers then bred those mice, their offspring showed the same fear of the odour even though they’d never been electrocuted. And they passed the same trait on to their offspring. 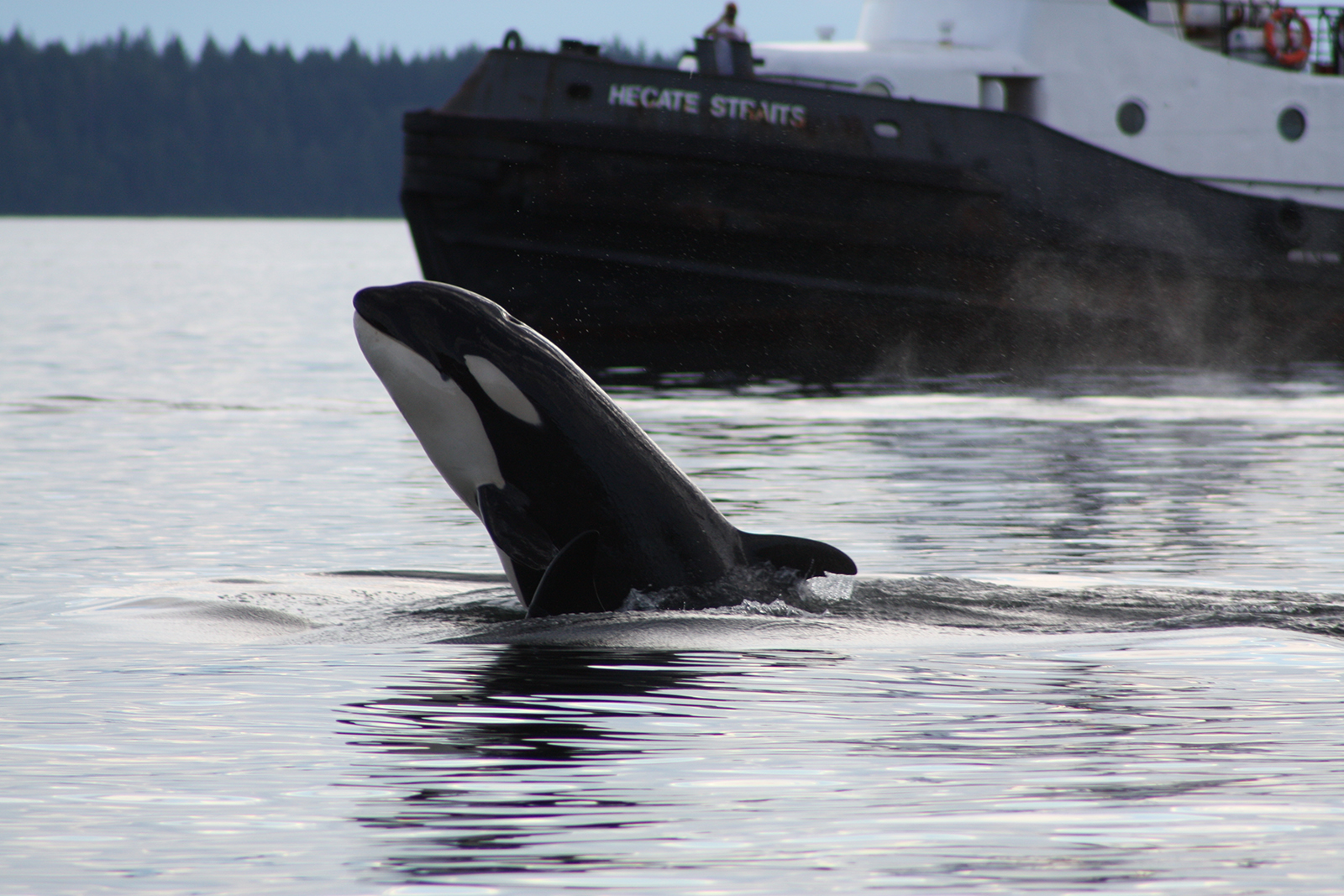 While increased boat traffic poses an undeniable risk to orcas, some have learned to follow commercial fishing boats and are robbing them of hundreds of thousands of dollars of fish catch. (Photo: Dymph Vander Maeden/Can Geo Photo Club)

“We don’t know how an experience in one generation could manifest itself in the next,” Alexander says. “More importantly, we don’t know what the unintended consequences could be.”

There is a good chance human pressures could cause maladaptations, says Martin Leclerc, a wildlife ecologist at Sherbrooke University.

“Humans are reshaping selection pressures and that’s not always for the best,” he says. “New behaviours always come with a cost.” For instance, the train tracks may make it easy for a grizzly to find a meal, but it also puts them at greater risk of being hit by a train. “The adaptation may be advantageous at one time but long term it may be risky to survival. We can’t say it’s always a good evolutionary strategy.”

Both Leclerc and Alexander say humans need to do more to reduce their influence on wildlife whenever possible.

“We need to understand that these animals are part of our social system,” says Alexander. “They are trying to do what we are doing, which is live their lives as best they can.”

Here are five examples of how predators are using human infrastructure to find an easy meal, and what's being done about it.

Grizzly bears on the tracks

When Parks Canada and CP Rail set out to study why grizzly bears were getting hit by trains in Banff and Yoho national parks, they thought the bruins were attracted to wheat spilling from rail cars. Using GPS tracking and scat analysis, the researchers found that the bears were more interested in the carcasses of deer and elk that had been hit by the trains.

What’s being done: CP Rail is already working on reducing grain spillage by fixing leaky cars, stopping trains less often in the national parks and cleaning up spills faster. The research team also suggests fencing in problem areas of the rail line, improving sightlines so bears and ungulates can see trains sooner, installing warning sirens to alert animals of oncoming trains and, in constricted zones, creating escape routes so animals can get off the tracks more easily.

In Alaskan waters, and increasingly off the northern British Columbia coast, orca and sperm whales are robbing commercial fishing boats of hundreds of thousands of dollars in fish catch. The whales have learned to follow the fishermen and steal fish off long lines of baited hooks, sometimes leaving only fish lips behind. In one reported case, an orca followed a boat for 18 hours; in another, for more than 100 kilometres.

What’s being done: Some commercial fishermen are giving up on areas with problem orcas. Others are trying a different fishing technique. “Pots” resembling giant crab traps are baited to attract fish, but keep the catch locked away in a cage, out of range of the orcas’ teeth. Switching to pots is expensive, however. Retrofitting a commercial fishing boat can cost $800,000 or more.

Falcons in the city

During migration, birds flying at night sometimes get disoriented among the bright lights and towers of cities. The birds end up circling skyscrapers and some fly right into them. Raptors have learned the confused birds are easy prey. One study monitoring peregrine falcons at the Empire State Building in New York City found they plundered the confused migrants with a success rate as high as 44 percent.

What’s being done: Several North American cities, including Toronto and New York, have “lights out” policies where tall buildings voluntarily dim their lighting during peak migration periods. Bird advocates would like buildings to go further, turning off their lights entirely at night and using lights that point down instead of at the sky.

Wild dogs on the road

For African wild dogs, the decision to chase prey or give up comes down to optimal flight distance: how far away the prey is when it sees the dogs coming. The wild dogs have learned that when they hunt along roadways their chances of getting to within optimal flight distance of prey increases dramatically. The downside is the dogs are hit by cars in significant numbers.

What’s being done: Researchers are still working on a solution for increased wild dog mortality. Fencing and speed limits have been raised as possibilities. 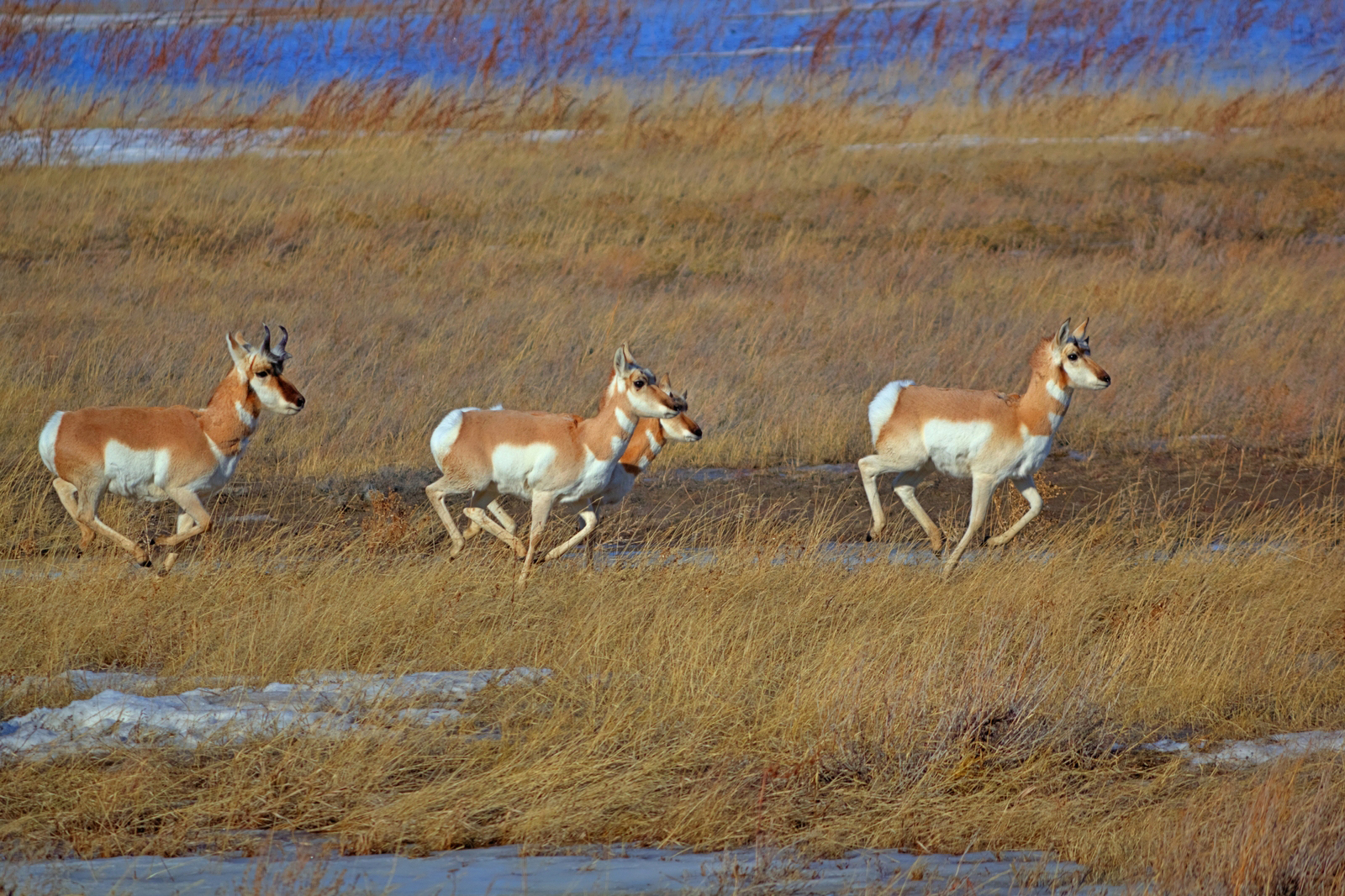 Pronghorn antelope don’t jump. They may be the second-fastest land animal on Earth — far faster than any other predator in North America — but the prairie species never learned to leap over fences. Instead, they duck under them, slowing their progress and creating an opportunity for coyotes to catch up and kill them. Fawns are particularly susceptible. Coyotes have learned to herd antelope toward fences, especially pasture corners.

What’s being done: Across the antelope’s range on both sides of the border, ranchers and conservation groups are removing unneeded fences. They’re also replacing the bottom line of wire fences, swapping out barbed wire for smooth, and adjusting the height to allow more room for antelope to slip under.

Ryan Stuart is a B.C.-based writer specializing in outdoor adventure. His work has appeared in Outside, Reader's Digest, Ski Canada and more.