Did meteorite impacts help create life on Earth and beyond?

Our understanding of the effects of impact events is continually evolving
By Gordon Osinski
September 8, 2020

If you have ever looked up at the Moon on a clear night, you would probably have noticed that the surface is pockmarked by hundreds upon hundreds of craters. Once thought to be possibly volcanic in origin, we now know that these are meteorite impact craters, formed by collisions of asteroids and comets with the lunar surface over the past four and a half billion years. The Moon is our next door neighbour in the context of the solar system and so essentially what happens on the Moon, also happens on the Earth. In fact, because our planet is larger than the Moon, giving us a higher gravity, there is actually a higher rate of meteorite impact events on Earth. We don’t see this record on Earth, because unlike the Moon, our planet is geologically active and so craters are continually destroyed through plate tectonics, volcanic activity, and erosion by wind, water, and ice. Despite this, there are approximately 200 confirmed impact craters on Earth.

By studying the Earth’s impact record, our understanding of the effects of impact events is continually evolving. If you were asked to look up and picture a 15 kilometre diameter chunk of rock hurtling towards the Earth at more than 15 kilometres per second, the first thought to enter your mind is probably not a positive one! Indeed, it is an asteroid of this size that we think wiped out the dinosaurs and 65 per cent of other species on Earth 66 million years when it crashed into what is now the Yucatan peninsula in Mexico. The destructive effects of these impact events range from a fireball, tidal waves, and massive earthquakes close to the point of impact, to the injection of vast amounts of soot and climatically active gasses, such as sulfur dioxide and carbon dioxide, which led to changes in the global climate. These negative effects are well studied and led to the idea that meteorite impacts presented a barrier for the emergence of life and/or one that would have frustrated or extinguished life once it had arisen on Early Earth around four billion years ago. 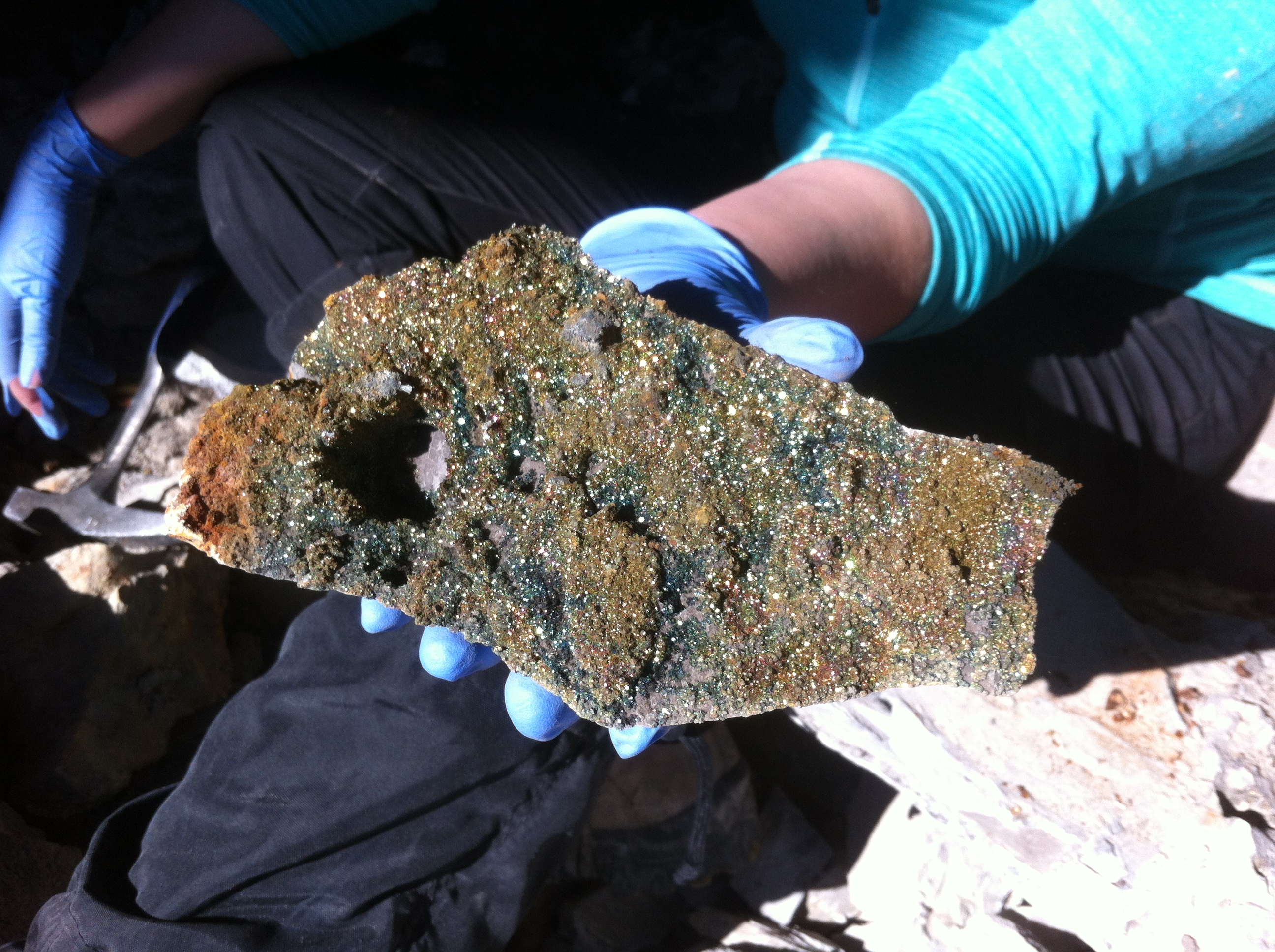 A close up of hydrothermal minerals in a deposit at Haughton Crater. (Photo: Gordon Osinski)

Since I first started studying impact craters 20 years ago, I have been intrigued about the possibility that impact events can also have benefits for life, and by life, I mean microbial life. Together with my colleague Dr. Charles Cockell from the University of Edinburgh (Scotland), and two former PhD students, Dr. Alexandra Pontefract (now at Georgetown University, USA) and Dr. Haley Sapers (who has recently moved to York University), we recently published an article entitled “The Role of Meteorite Impacts in the Origin of Life” in which we outline the case that impact events may have played a key role in the origin of life on Earth, and by extension, on Mars and other planetary objects throughout the Universe.

Before we get to the question of when and where life originated on Earth, let’s take a step back and consider the ingredients or building blocks for life. In a nutshell, all life on Earth is carbon-based, and so we needed a readily available source of carbon on the Early Earth. In addition, scientists have determined that there are about 25 elements that are essential for life, although the six most common are the so-called CHNOPS elements — with the letters standing for the chemical abbreviations of carbon, hydrogen, nitrogen, oxygen, phosphorus, and sulfur. As we review in our paper, several types of asteroids and comets contain significant amounts of organic molecules, including even amino acids, that are key building blocks for life. Experiments, computer modelling, and laboratory studies indicate that a high proportion of these elements and molecules can survive the impact process.

In addition to delivering the building blocks for life, we also discuss how impact events can generate minerals such as clays, which have been proposed as having played a key role in both the formation of simple organic molecules such as formaldehyde, and in the formation of molecules as complex as RNA. 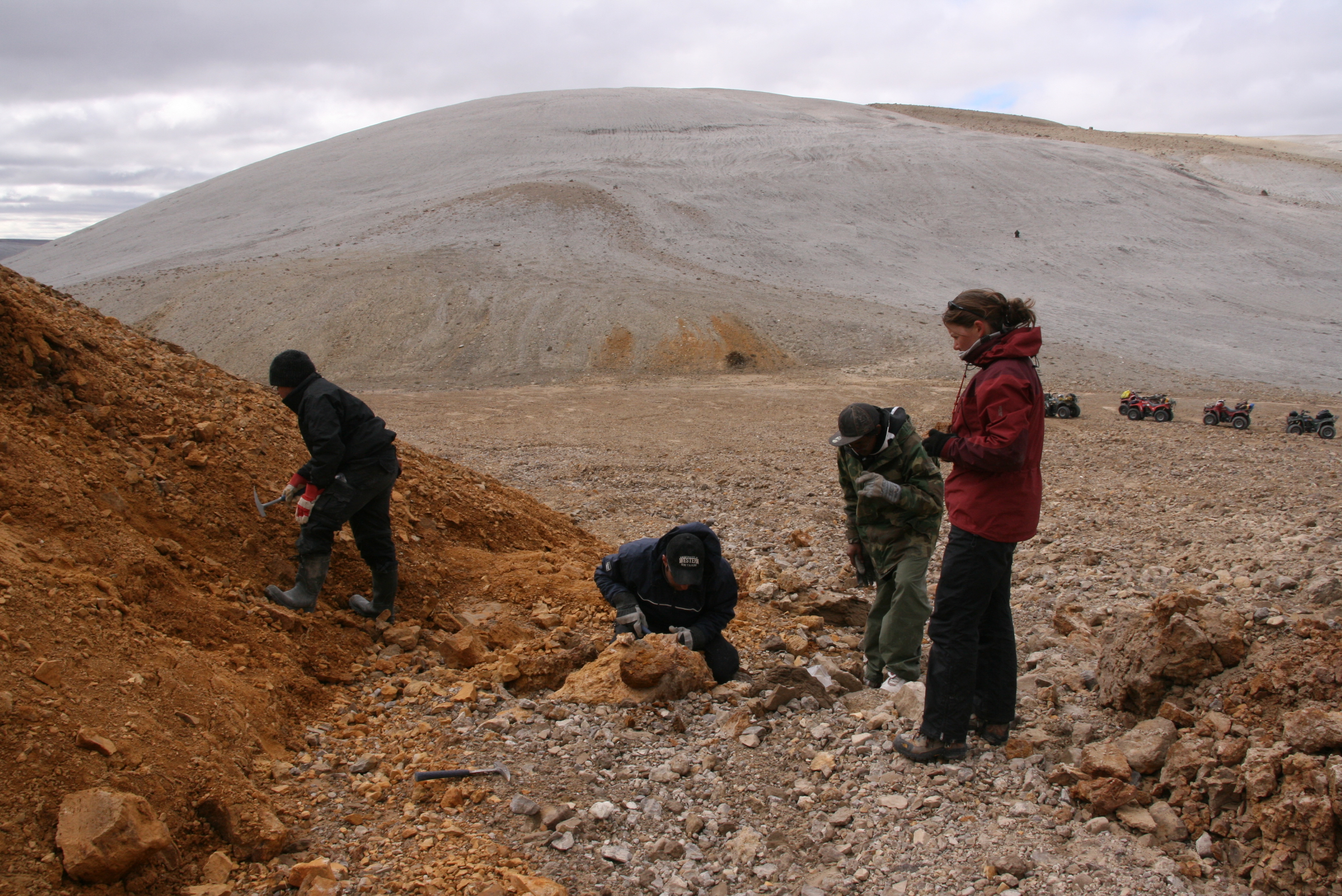 A further major aspect of our work is the realization that impact events can generate habitats that represent oases for microbial life. Essentially, the formation of a meteorite impact crater results in the production of a habitat(s) that was not present before the impact, but which then can be viewed as being beneficial from a biological standpoint. The three major habitats generated by impact events that we discuss are hydrothermal systems, so-called “lithophytic” habitats – which are literally habitats associated with rocks – and impact crater lakes. Briefly, the word hydrothermal comes from the Greek words for heat and water — think of hot springs and geysers that you find in volcanically active areas such as Yellowstone, U.S.A, Iceland, and New Zealand. Importantly, these hydrothermal systems, whether on land or underwater, have long been proposed as an environment in which life originated. A major aspect of our research has been documenting hydrothermal systems in impact craters around the world, to the point where we think it likely that most craters over a few km in diameter on Earth, and possibly Mars, would have generated hydrothermal systems.

Another idea that my co-authors and I have been working on for a number of years is that the incredibly high temperatures (thousands of degrees Celsius) and pressures (1,000 times higher than atmospheric pressure) during the impact process can actually transform a once uninhabitable rock into a habitable one. An excellent example of this is at the Haughton Crater on Devon Island, Nunavut, where 3 billion old rocks (gneisses) of the Canadian Shield — which are typically dense and non-porous — were transformed to an almost pumice-like material, in which cyanobacteria live at the present-day in microscopic pores a few millimetres beneath the surface of the rock. They do this to protect themselves from the extreme temperatures, dry conditions (Devon Island is a polar desert), and the high UV radiation that is the norm in these polar environments. This extreme environment is provides an excellent analogue to the challenges that life would face on Mars.

There is a growing realization that meteorite impact events are not just agents of destruction, but that they are a fundamental geobiological process in planetary evolution that played an important role in the origin of life on Earth. We conclude our paper with the recommendation that impact craters should be considered as prime sites in the search for evidence of past life on Mars. As it happens, NASA’s latest rover, Perseverance, is on its way to the Red Planet and is scheduled to land in Jezero Crater in February 2021. Perhaps some of the habitats for life that we describe in this paper will be found by Perseverance! It is also notable that impact cratering is ubiquitous on planetary bodies throughout the universe and is independent of size, composition, and distance from the host star. Impact events thus provide a mechanism to generate habitable planets, moons, and asteroids, not just throughout our own Solar System, but also beyond.

Would it not be poetic that impacts, long seen as harbingers of death, turn out to have in fact been the cradle of life?