Doing your part as an eco-conscious consumer doesn’t end once you buy a bioplastic product
By Madigan Cotterill
August 5, 2020

The problem with plastic is a global epidemic that follows you throughout your day. It is very likely that you are using plastic right now. Cell phones made with polycarbonate, clothes made of polyester, and shoes made with polyurethane — all of these materials are plastic.

In Canada, it is estimated that 3.3 million tonnes of plastic waste is produced per year. Most of which will end up in landfills, significantly impacting the environment and wildlife. The Government of Canada says that if current trends continue, the ocean could reach a 1:1 weight ratio of plastic to fish by 2050. Concerned for the health of our planet, large and small-scale efforts have been made to come up with solutions to this ever-growing plastic problem. One major solution, some say, could be the implementation of bioplastic.

Compared to regular plastic, which is typically petroleum-based, bioplastics are made of biological or renewable resources. Under the right conditions, these materials can be compostable or made to be biodegradable.

The inability of regular plastic to decompose quickly is a major problem, sometimes taking thousands of years to break down. New research has found that even with immediate action put into reducing plastic waste, there could still 710 million metric tons of plastic in the environment by 2040.

“The main advantage of bioplastics is that they support the sustainable carbon cycle, therefore reducing the CO2 that is released in the atmosphere, compared to the traditional petroleum-based plastics,” says Dr. Amar K. Mohanty, professor, and Ontario Agriculture College distinguished research chair in sustainable biomaterials at the University of Guelph.

Other advantages, Mohanty says, include the ability of bioplastic to reduce the carbon footprint, reduce the dependency of fossil fuel resources, and the capacity of some bioplastics to be degraded under appropriate environmental conditions.

To support industries interested in manufacturing products using bioplastic, companies like NaturePlast have been creating a range of alternative solutions to regular plastic. Founded in 2007, NaturePlast states that their materials can be used in a wide variety of sectors including cosmetic packaging, pet supplies, and construction. Other companies specializing in bioplastics, like Green Dot Bioplastic and Vegeplast advertise their products as compostable and biodegradable, but there is a catch.
Just because a product is advertised as a bioplastic does not mean it is biodegradable. Mohanty explains the term “bioplastic” can be defined as a two-way strategy. The first is a bioplastic that is biobased. These plastics are derived from biological material like corn, shells, or plant oil. The second type is a bioplastic that is biodegradable; meaning the plastic can be broken down into natural substances like water and carbon dioxide. Sometimes, however, bioplastics can also be both.

To make things even more complicated, Mohanty says that even biodegradable plastic might not be biodegradable in every environment.

Although many companies can produce both biobased and biodegradable products, it is still up to the consumer to ensure that they are disposing their bioplastic waste properly. For the bioplastic to fulfill its purpose, proper disposal is essential, otherwise bioplastic waste can still end up in a landfill.

State of the Planet says that when deprived of oxygen, bioplastics left in landfills may release methane, a greenhouse gas 23 times more potent than carbon dioxide. Because bioplastics can be made of different materials, not all bioplastics should be disposed of in the same way.

“Many people claim that petroleum-based plastics are recyclable. But imagine if you do not have the recycling facilities for that plastic or the plastic is not recycled,” says Mohanty. “It will become pollution, and it will go to the landfill or the incinerator. In my opinion, bioplastic and even petroleum-based plastic, all should have an end of life. Meaning, they need to be discarded in the proper environment.”

To evaluate the environmental impact of a product, it is necessary to look at each stage of a product’s life — this is called the lifecycle analysis.

“It is a wonderful tool to assess if the value of plastic is good for the environment, or if it is worse than the original plastic,” says Karen Stoeffler, a senior research officer for the National Research Council of Canada. Broken down into four parts (materials, manufacturing, use, and disposal) Stoeffler explains that the lifecycle analysis looks at the overall impact of a product, not just one stage. 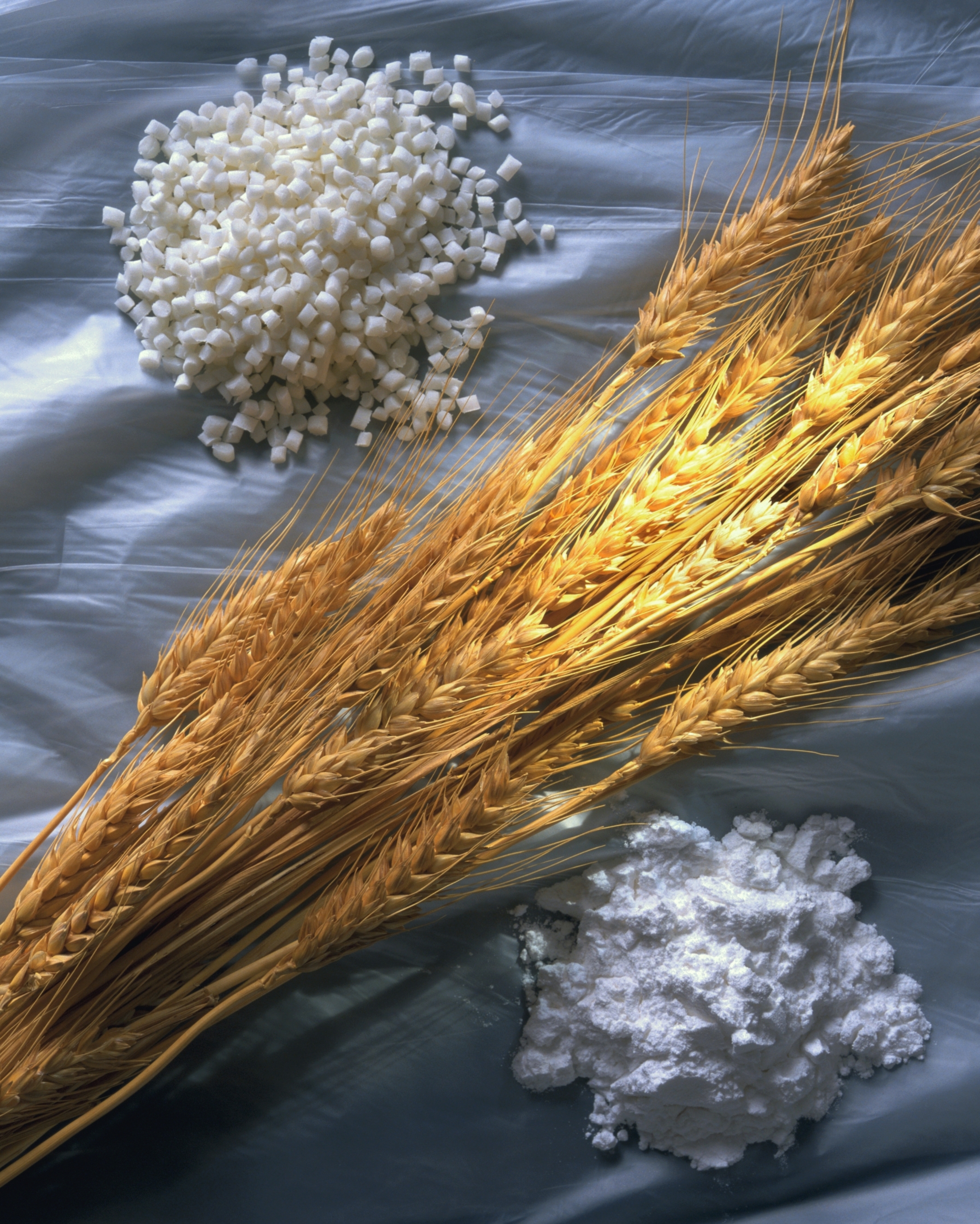 CSIRO has developed a variety of biodegradable polymer materials from renewable resources such as starch, cellulose and protein. (Photo: CSIRO)

Having a compostable material allows consumers to divert their waste away from landfills, but this is only if the consumer disposes of their bioplastic waste properly. This is where it gets tricky.

Many bioplastics are not compatible with home composting methods. The Government of Canada states that existing biodegradable plastics can often only be compostable in a narrow range of conditions. This limits their intended function and can potentially increase the amount of plastic waste.

A statement from Environment and Climate Change Canada says that alternative types of plastic could have benefits when examined from a full life-cycle perspective; however, their application needs to be carefully assessed.

“Currently, there is no regulatory framework in Canada that defines these materials and their management. Biobased plastics standards, including standards for compostable plastic products, will be addressed as part of the federal plastic waste agenda and the Canada-wide Strategy on Zero Plastic Waste,” says Environment and Climate Change Canada.

The amount of agriculture area necessary to grow the materials needed to produce bio-products is also something to take into consideration, and part of the lifecycle analysis mentioned by Stoeffler.

“When you are growing a plant to make plastic you will need land, you will need pesticides, and maybe, you might have a detrimental impact on other indicators like quality of water and quality of ecosystem,” she says.

Examining the amount of greenhouse gas emissions released as a result of expanding agriculture areas, one study states some drawbacks in bio-product manufacturing.

“Converting rainforests, peatlands, savannas, or grasslands to produce food crop-based bio-products creates a “carbon debt” by releasing 9 to 170 times more CO2 than the annual greenhouse gas (GHG) reductions that these bio-products (such as the bioplastics) would provide by displacing petroleum-based products (conventional plastics).”

Many praise bioplastics for their possible reduction in the use of fossil fuels. This claim, however, may not be entirely correct. Although there can be reduced dependence on fossil fuels, when a biological material is used as a plastic base, fossil fuels can still be heavily relied upon to power manufacturing plants. The American Chemical Society states that producing bioplastic often requires nearly as much energy as producing conventional plastic.

Mohanty says a key underlying difference between bioplastic and regular plastic is the fact that they are sourced from raw material. This is an advantage because, at the end of life, when the bioplastic is being incinerated, they maintain carbon dioxide neutrality. For this to happen, however, the bioplastic needs to end up in the right place. Only then will this advantage be implemented.

Stoeffler explains that a common misconception consumers have is in regards to compostable waste.

“It’s not a magic plastic. You cannot throw it away and think it will disappear magically.” She says that a lot of people seem to believe that because an item is compostable, it can be disposed of anywhere, like in a river or the sea. “It doesn’t magically disappear. It will stay for a few days or weeks, and it is susceptible to entangling animals, fish, turtles, like in all those pictures you see.”

She says that it is not the plastic that is good or bad, it is the way we are using plastics that plays a larger role in its impact.

“There is a balance, we can win somewhere and lose on other parts,” says Stoeffler. “We are doing our best to make a nice product that will have a better environmental impact, but sometimes we fail. So, we have to validate that, and now I would say most companies are doing lifecycle analysis to make sure that their product is better than the original material.”

So what is the solution to the plastic problem? One answer is to be a more mindful consumer.

“In my view, the best ways (to reduce plastic) would be to reduce, reuse, recycle, and compost,” says Mohanty. “We should refuse single-use plastic like plastic bags and straws and we can educate in this reuse, like in using refillable water bottles and using reusable shopping bags.”

Bioplastics are a step in the right direction but don’t be fooled into thinking they are the answer. Stoeffler says, “as consumers, we have to be aware that each time we buy a product, we have an environmental footprint.