“Most successful season” of exploration since the wreck was discovered surfaces 350 artifacts from officers’ quarters
By Alexandra Pope
February 21, 2020

An accordion. A wooden hairbrush with many of its bristles still intact. A stick of sealing wax bearing the thumbprint of the last person who used it. A pair of Royal Navy epaulettes, carefully stored in a box.

Preserved for over 170 years by the frigid waters of the Arctic Ocean, these and hundreds of other artifacts retrieved from the wreck of HMS Erebus and revealed to the public for the first time this week paint an intriguing picture of life aboard the doomed ship — and may ultimately hold clues to the fate of Sir John Franklin’s lost expedition.

In one of the largest and most complex underwater archaeological operations ever conducted in Canada, Parks Canada divers excavated some 350 artifacts from Erebus over the course of four weeks in the summer of 2019. Months of planning and logistical support from Inuit guardians in the small community of Gjoa Haven, Nunavut helped make this the “most successful season” of exploration since the wreck was discovered in 2014, says Marc-André Bernier, manager of Parks Canada’s underwater archaeology team and one of the divers who participated in the 2019 fieldwork.

“When you find a shipwreck, you have to understand what you’re faced with before you actually start doing some intrusive work on the site,” he explains. “Where should you start? What should be the methodology you embrace? What are the threats to divers in the water?”

Previous dives were conducted with scuba gear, meaning divers were limited by their portable air supply. For 2019, Parks Canada stationed a barge above the wreck to supply divers with air from the surface and pump hot water into their specially-designed suits, allowing them to stay under for more than an hour at a time.

“We were able to have divers go down on the wreck and record and map everything prior to removing objects, take photographs, and in some cases remove broken timbers and sediment that had covered certain areas,” says Bernier. 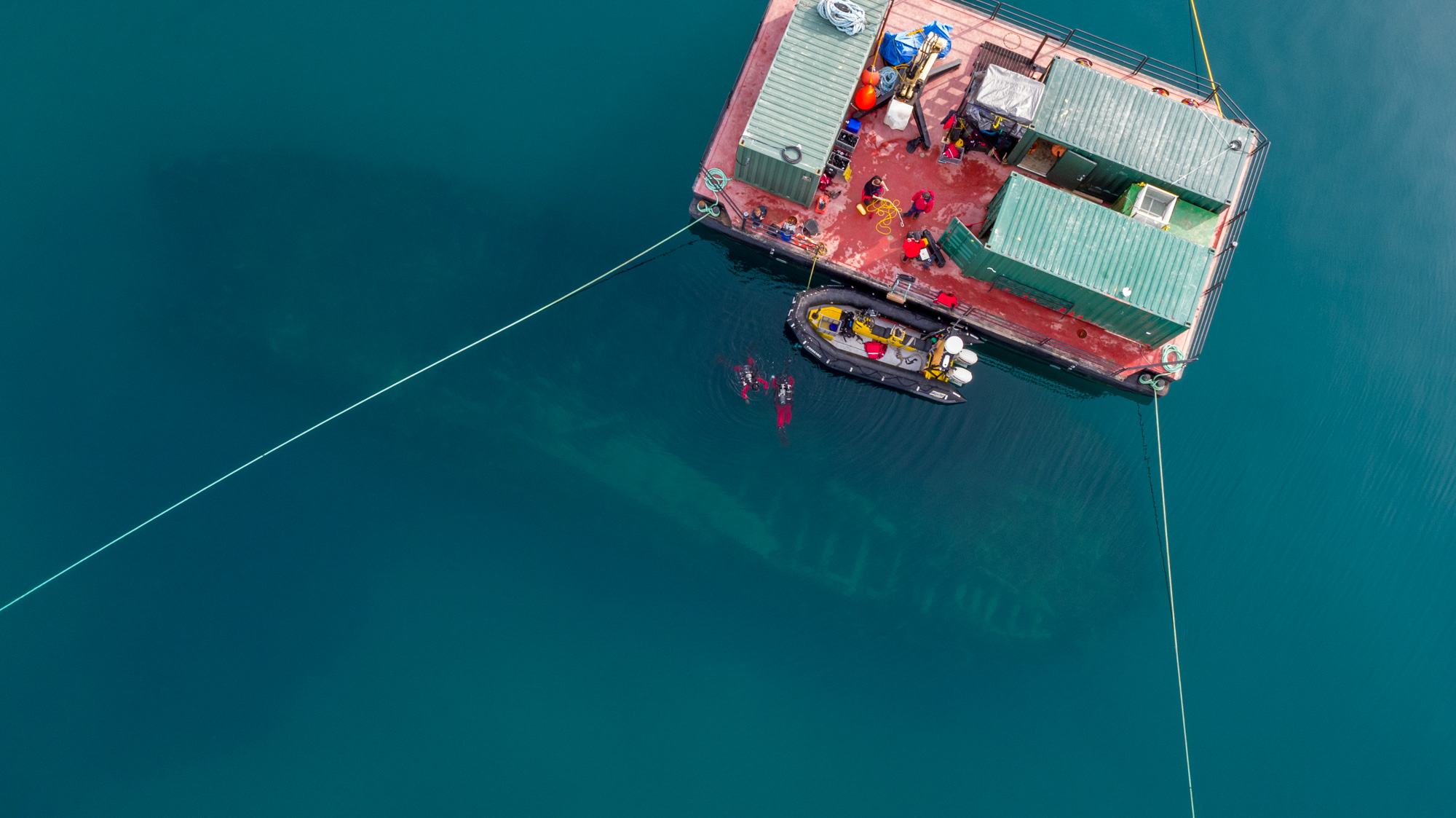 A drone photo showing the field support barge positioned above the wreck of HMS Erebus in the summer of 2019. (Photo: Parks Canada Agency)

Because of the way the wreck is positioned, the upper deck has been severely damaged by storms and the seasonal movement of ice. Due to this, the 2019 dive team targeted the officers’ quarters belowdecks, where they believed there was a better chance of finding undisturbed areas. Their hunch proved correct: in one cabin, likely belonging to 3rd Lieutenant James Walter Fairholme, even the bed remained intact, with storage drawers beneath it where they discovered a box containing the Royal Navy epaulettes.

More spectacular finds awaited in the pantry of the captain’s steward, including stacks of dishware, still neatly shelved. Other finds in the pantry include a pencil case containing lead and slate pencils, the sleeve of a leather coat, and, most exciting of all, a lead stamp bearing the image of an anchor and letters spelling out “Ed. Hoar.” According to Erebus’ muster book, Edmund Hoar was Sir John Franklin’s personal assistant. He was 23 years old when the expedition departed England in search of a Northwest Passage in 1845.

“That was quite fulfilling because it confirmed exactly where we were, and confirmed some of his personal belongings were in that compartment,” says Bernier.

Another item — a slim wooden ruler, possibly part of a drawing kit or other instrument — was found inscribed with the name Frederick Hornby. This is especially intriguing because Hornby was listed as a junior officer on HMS Terror, not Erebus.

“This is a case where we can see that things were dynamic,” says Bernier. “Was Hornby moved to Erebus at one point, or was this an object that was given to someone else when Hornby passed away?” 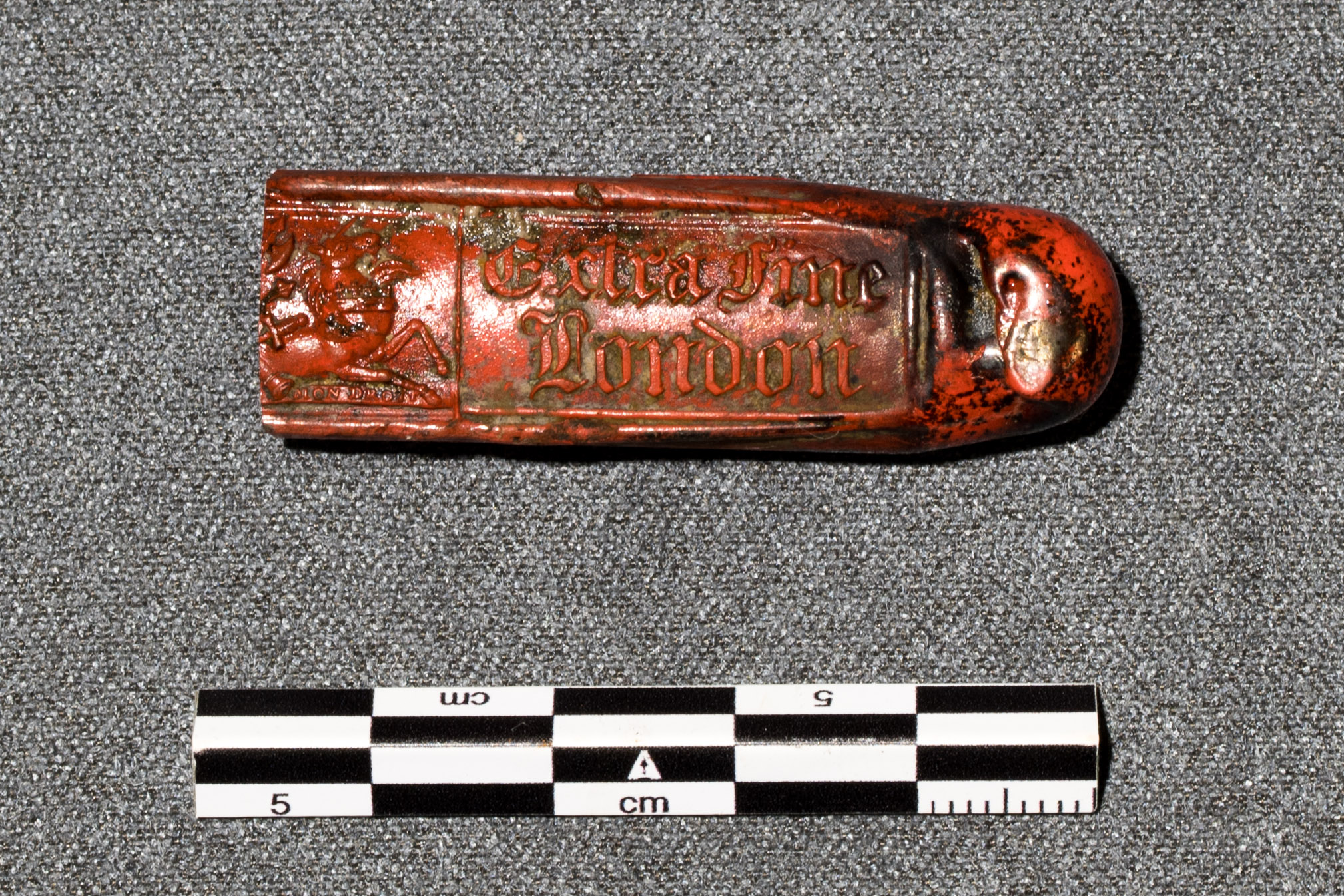 Parks Canada plans to return to Erebus this summer to finish combing through the spaces they uncovered in 2019, then continuing working their way aft, where the higher-ranking officers’ quarters were located. These quarters are even more well-protected from the elements, and could harbour written documents and daguerreotypes.

The team will also revisit the wreck of Terror, though Bernier notes there is a greater urgency to explore Erebus as it is more vulnerable to erosion.

In the meantime, more study will be done on the items retrieved in 2019, each representing a touching link to a person who lived, worked, and may have died on board Erebus, says Bernier.

“We’re only in the infancy of trying to understand how Erebus got there, who was on board and what happened,” he says. “Going systematically through these cabins, we’ll be able to start to draw an overall picture of this expedition … about the individual stories of men who went out to explore and lost their lives.”